3 reasons why Avalanche (AVAX) price is up 200% this month

Layer-one blockchain networks like Bitcoin (BTC) and Ethereum (ETH) form the foundation of the cryptocurrency ecosystem and enable smart contract functionality that has allowed the creation of new industries like decentralized finance (DeFi) and nonfungible tokens (NFT).

Avalanche (AVAX) is a relatively new layer-one solution that has recently seen a significant increase in price and adoption as the dominant smart-contract platform, Ethereum, continues to struggle with high transaction costs and slower processing times compared with its competitors. 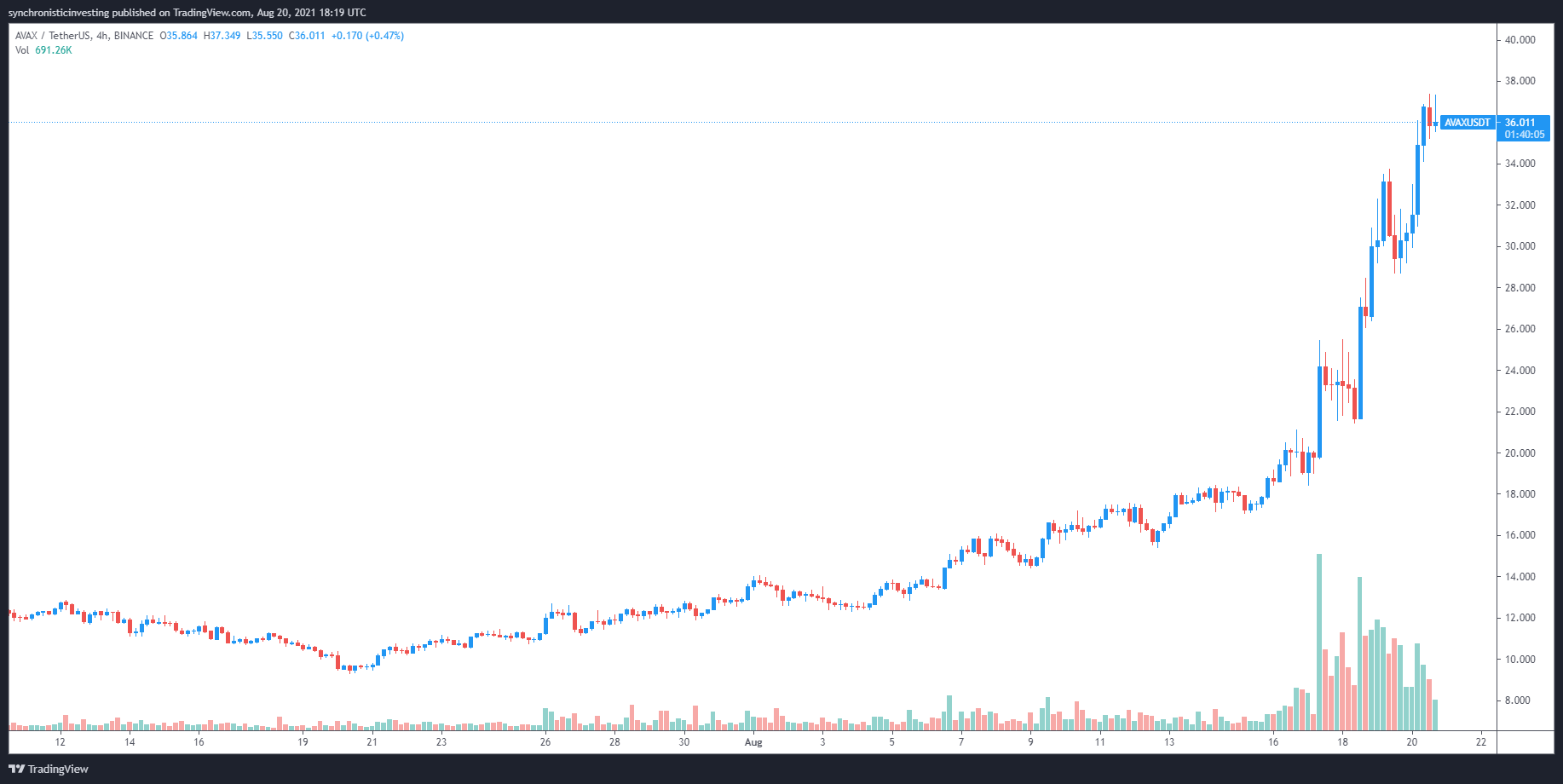 Three reasons for the significant price growth from AVAX are its rapidly expanding DeFi ecosystem, the release of the Avalanche bridge to Ethereum and the protocol’s unique tokenomic design that offers dynamic fees and a token burn mechanism.

One of the biggest developments to happen for the Avalanche protocol was the announcement of Avalanche Rush on Aug. 18, a $180 million liquidity mining incentive program launched in conjunction with Aave and Curve that is designed to introduce more applications and assets to its growing DeFi ecosystem.

Experience the power of #Avalanche. Welcome to #AvalancheRush, the $180M liquidity mining incentive program in collaboration with leading DeFi dapps–both on and off Avalanche– starting with @aaveaave and @curvefinance. And, this is just Phase 1! https://t.co/YGrrVB7Uqc

Phase one of the Rush program is set to begin in the near future and will allow AVAX to be used as liquidity mining incentives for Aave and Curve users over a three-month period.

A total of $27 million worth of AVAX has been set aside by the Avalanche Foundation to fund the incentive program with additional allocations planned for phase two.

The program was designed to demonstrate the Avalanche Foundation’s commitment to scaling DeFi on the network and helping to “create a more accessible, decentralized and cost-effective ecosystem.”

Evidence of the growth of DeFi on the Avalance network can be found in the increasing total value locked (TVL) in protocols on the network, such as Pangolin and Benqi Finance which recently surpassed a TVL of $300 million.

A second reason for the bullish growth seen in the Avalance ecosystem over the past few weeks is the release of the Avalanche Bridge (AB) on July 29. This «next-generation cross-chain bridging technology” enables the transfer of assets between the Avalanche and Ethereum networks.

Today, AB officially transferred over $100M in tokens to and from Ethereum.

As shown in the above tweet, in the three weeks since the AB was launched, it has transferred more than $100 million in token value between the two networks as holders seek lower-fee environments to conduct their transactions.

The AB is estimated to be five times cheaper than the previous Avalanche-Ethereum Bridge (AEB) and it is purported to offer a “better user experience than any cross-blockchain bridges launched to date.”

If Ethereum is unable to get a handle on high transaction costs in the near future, there is a good chance that assets and liquidity will continue to migrate to chains like Avalanche as their DeFi ecosystems grow in size and value.

Related: Avalanche (AVAX) in ‘overbought’ zone after 100% gains in a week — Correction ahead?

A third reason for the increasing interest in the Avalanche network is the protocol’s unique tokenomic structure that includes a transaction fee burning mechanism that helps reduce the circulating supply over time.

See how much has been burned so far! https://t.co/LpxU9dtyXy

As noted in the above tweet, all fees on Avalanche are burned for the benefit of everyone in the community as the hard-capped supply of 720 million AVAX is guaranteed to decrease over time. This could help increase the value of the remaining tokens in circulation.

At the time of writing, more than 163,000 AVAX have been burned, a figure which increases more rapidly as more users transact on the network.

The network’s fee mechanism is also set to undergo an upgrade to Apricot phase three which will introduce C-Chain dynamic fees on Aug. 24.

The new integration will allow for the addition of a time-based rolling window fee calculation, a capped fee range of 75–225 nAVAX and a block gas limit of 8 million gas.

Missouri mayor suggests giving residents up to $1K in Bitcoin