The cryptocurrency market faced a fresh round of selling on Sept. 20 as global financial markets fell under pressure thanks to fears surrounding the potential default of Evergrande Group, a China-based real estate company whose collapse could send ripples across equities markets.

Data from Cointelegraph Markets Pro and TradingView shows that the early morning sell-off in Bitcoin (BTC) intensified into midday as the price dropped to a low of $42,493 before bulls managed to bid it back above $43,500. 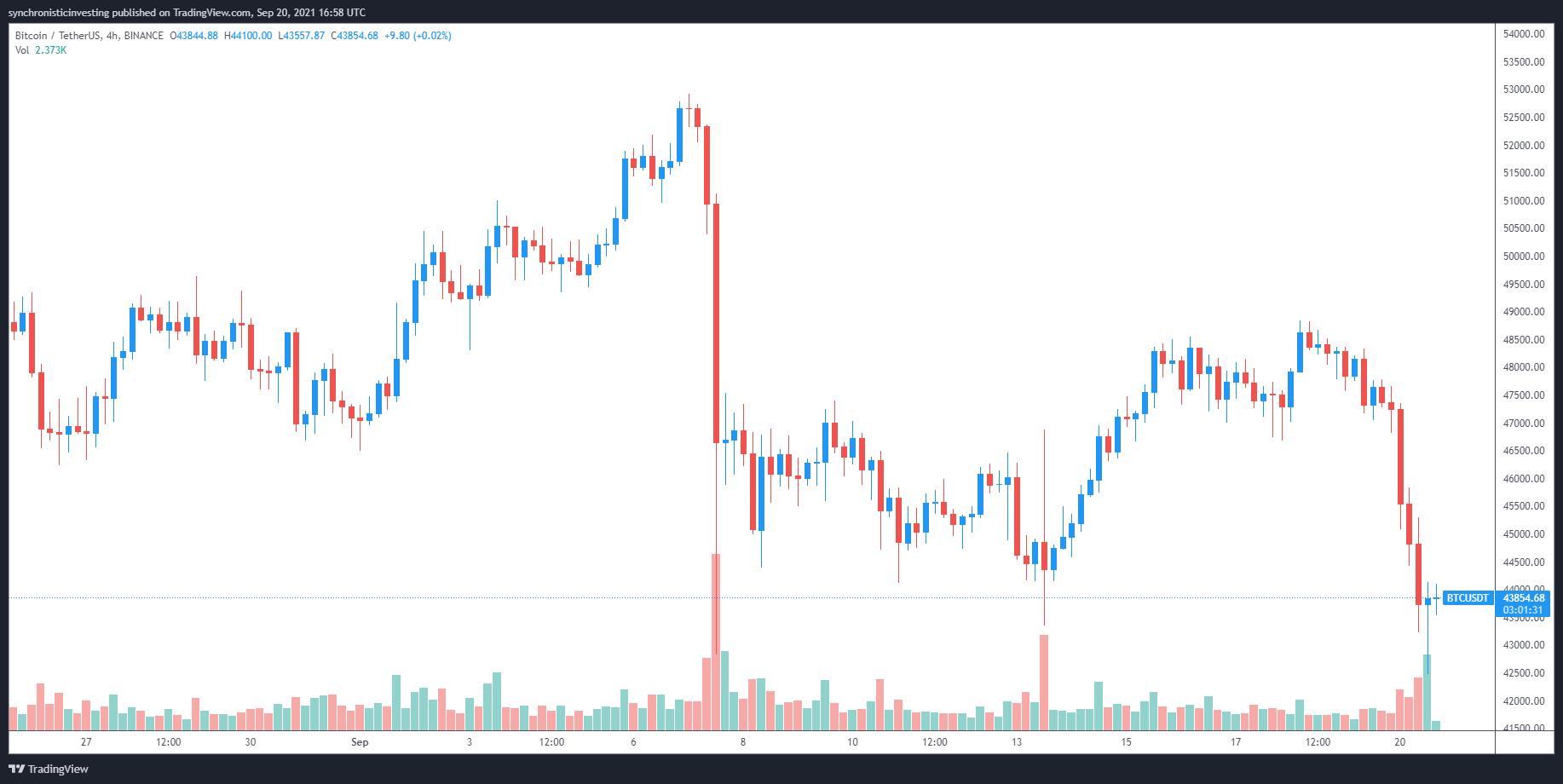 With fear on the rise and uncertainty spreading across the market, here’s what analysts are saying about Monday’s price move and what to expect in the days ahead.

The bearish reversal provided a warning

Bitcoin’s price drop caught many in the crypto market off guard but according to analyst and pseudonymous Twitter user John Wick, the price action leading into Monday’s pullback formed a confirmed bearish reversal bar on the 4-hour chart, signaling that the move was an imminent possibility.

#BTC (4h)#Bitcoin price action had printed a Confirmed Bearish Reversal bar within a Volatility Squeeze. This is one of the most powerful setups bullish or bearish.

This comes on the back of the Evergrade news. We’ll see how systemic this becomes over the next week or two. pic.twitter.com/p1ewjHn6bX

According to the trader, the drop follows the most recent developments regarding Evergrande which really started to gain attention last week at the time as the bearish reversal pattern for Bitcoin was forming.

It will likely take several weeks for the developments surrounding Evergrande to play out and ripple through the global financial markets, indicating that traders could be in for a period of increased volatility.

Insight into the key levels to watch was provided by crypto analyst and pseudonymous Twitter user ‘CryptoCapo’, who posted the following chart highlighting the support zone between $42,000 $44,000 and a lower zone of support at $38,000.

“I bet for a bounce from the blue zone, but if it breaks and retests this zone, the green one will be in play. Both are good entry prices for what is to come in the next months ($100k+).”

Related: Here’s why Bitcoin might be safe from a global stock market crisis

One final bit of analysis came from crypto trader and independent market analyst Scott Melker, who posted the following tweet showing that the drop in price has led to an oversold bullish divergence on the 4-hour chart.

Oversold bullish divergence with RSI and up.

Overbought (almost) bearish divergence with RSI and down. I wasn’t watching charts this weekend, missed it.

Oversold again now, I will be watching for another bullish divergence to form before considering another entry. pic.twitter.com/Bpu4CtlFIL

As highlighted by Melker, BTC’s price action over the weekend gave a warning ahead of Monday’s pullback as it formed an overbought bearish divergence with its RSI declining.

Now that the market has flipped back to oversold, the analyst is on the lookout for another bullish divergence to form as a signal that it is safe to re-enter the market.