Miners have accumulated $600M worth of Bitcoin since Feb

Bitcoin miner are accumulating as the network hash rate continues to recover according to on-chain analytics provider Glassnode.

In its Sept. 20 Week on Chain report, glassnode has stated that miner BTC balances are increasing, with wallets associated with miners having stockpiled 14,000 BTC worth roughly $600 million over the past six and a half months.

The report also noted that the bull markets of 2020 and 2021 have seen miners hold onto a larger portion of their rewards than in previous market cycles. Miners usually sell BTC to cover their expenses including electricity bills and hardware. 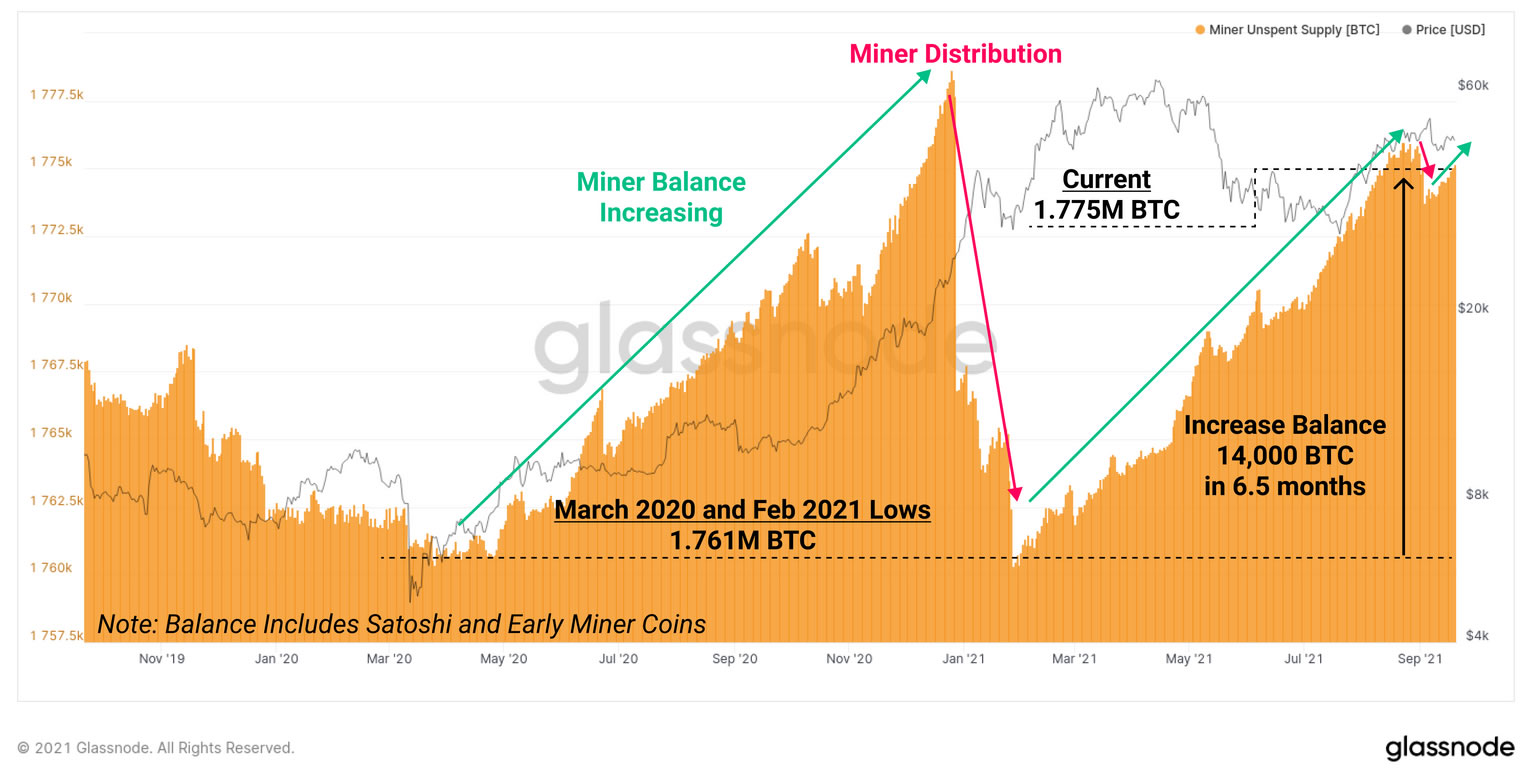 The trend of miner accumulation continued as the Bitcoin network’s hash rate recovered this past quarter.

Amid speculation regarding a wholesale Chinese miner exodus, Glasnnode reported that Bitcoin’s hashing power had slumped 51% to a local low of 90 Exahashes in late June according to Glassnode.

Network hashing power has recovered 52% from to tag 137 Exahashes according to a seven-day moving average. Hash rate recovery indicates that most mining operations have now relocated and are up and running again.

However, Bitcoin hash rate is currently sitting 34% below its all-time high of 184 Exahashes from May.

Related: Four North American Bitcoin miners that could benefit from the East-West shift

Despite the expanding mining treasuries and hash rate recovery, shares in publicly traded mining firms have pulled back as the broader financial markets retrace amid fears that Chinese property giant Evergrande may soon default on its loans.

Riot Blockchain, which has been spending big on building a new data center in Texas and expanding its hashing capacity this year, has suffered a 2.4% slide in the price of its stock since the start of trading Sept. 20.

Competitors Marathon and Hive Blockchain are both down by a more modest 1.5% since Monday morning, while shares in Hut 8 stocks have fallen by 5.4% over the same period — rounding off the performance for each of the “Big Four” North American mining firms.

However, mining stocks have outperformed Bitcoin for the week so far, with BTC tumbling more than 10% to trade at $42,730 at the time of writing, according to CoinGecko.

Own NFT Land in ERTHA Metaverse and Generate Lifetime Revenue