Ethereum’s native token Ether (ETH) has the potential to double its market valuation in the coming months, thanks to a confluence of supportive technical and fundamental indicators.

Ether price soared by more than 9% Friday to hit nearly $3,300 for the first time in ten days. Its gains surfaced primarily in the wake of a price rebound across all the top cryptocurrencies, including Bitcoin (BTC), which gained 9.5% to hit $48,000, the highest level in 10 days.

The data showed that the U.S. core personal consumption expenditures price index, the Federal Reserve’s preferred measure of inflation, rose by 0.3% in August and was 3.6% up year-over-year. Thus, the core inflation surged to its highest levels in 30 years.

Speculators tend to treat Bitcoin as a hedge against inflation, which explains the benchmark cryptocurrency’s latest response to the higher consumer prices in the U.S.

Meanwhile, Ether’s 30-day average correlation with Bitcoin sits near 0.89, as per data provided by CryptoWatch, which prompted ETH to move almost in lockstep with BTC. 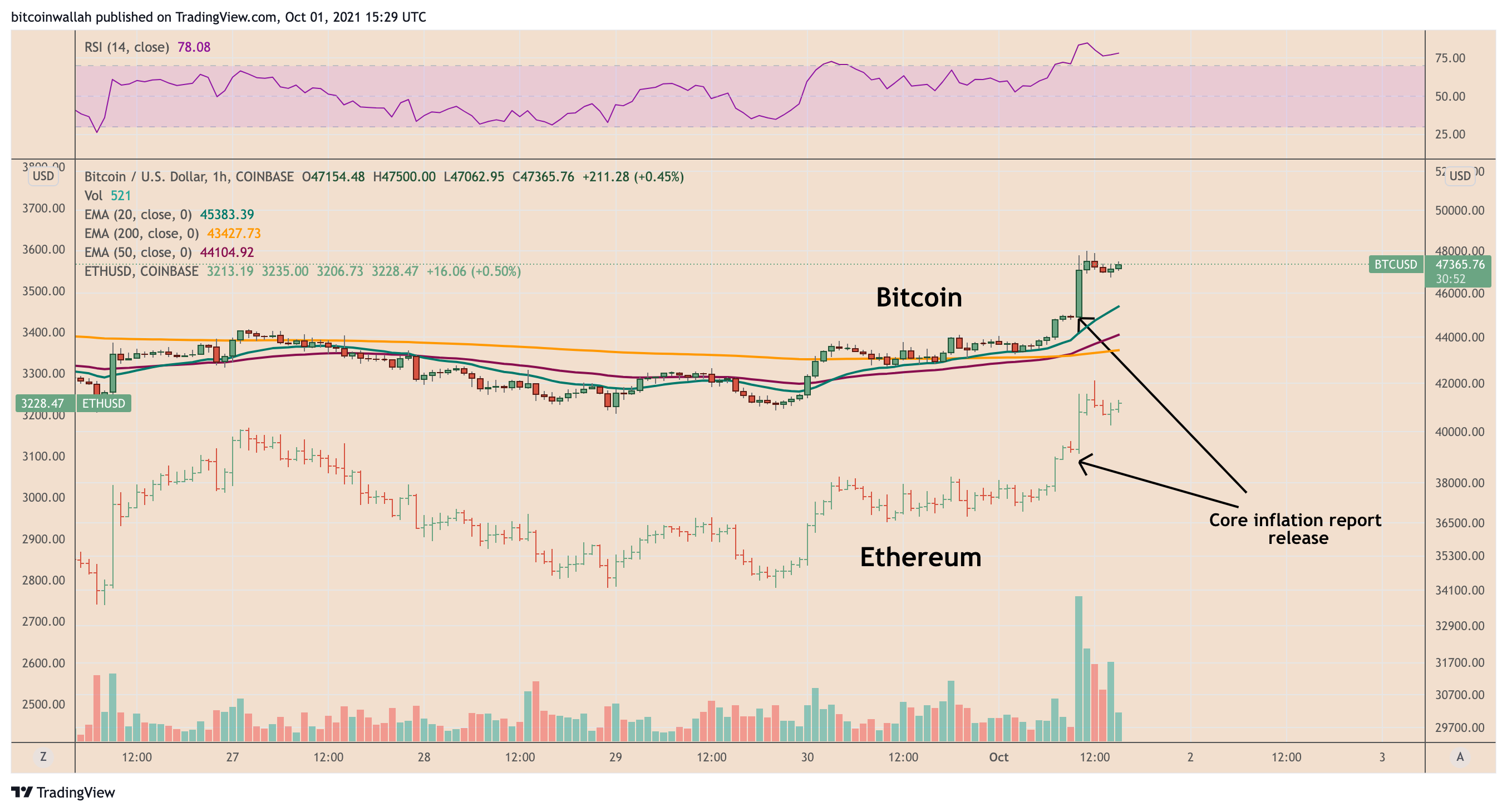 A University of Michigan survey conducted between Aug. 25 and Sept. 27 found that the longer-term inflation expectations among U.S. consumers rose to 3%, the highest in a decade.

The outcome appeared in contrast with the Federal Reserve’s Chairman Jerome Powell’s views; he rubbished the rising inflation as «transitory» for months but admitted during a recent Senate hearing that the higher consumer prices might stay intact at least until the next year.

As a result, inflationary pressures gave crypto bulls the reason to pitch Bitcoin as an ultimate hedge, with MicroStrategy CEO Michael Saylor suggesting corporates convert their cash-based Treasury into BTC.

In the presence of rampant inflation, cash & credit become crumbling liabilities. Convert your balance sheet to #bitcoin to turn liabilities into assets. https://t.co/kzCEPDA4S2

MicroStrategy holds about 0.5% of the total Bitcoin supply in circulation, currently worth over $6 billion.

Ethereum went through a network hard fork upgrade on Aug. 5 that further raised the bullish outlook for Ether, owing to the classic supply-demand law.

Dubbed London Hard Fork, the upgrade introduced an improvement protocol, EIP-1559, that started burning a portion of Ethereum’s network fee, called Base Fee. So far, the EIP-1559’s activation has removed 410,404 ETH (~$1.32 billion) out of active supply permanently, as per WatchTheBurn.com.

Ethereum is also preparing to switch its consensus mechanism from Proof-of-Work (PoW) to Proof-of-Stake (PoS). As a result, it has launched a staking pool that would allow users to earn rewards and grow their ETH holdings if they lock 32 ETH into their official PoS smart contract for a certain period.

So far, the amount of ETH deposited in the so-called Ethereum 2.0 staking contract has surged from around 11,500 in November 2020 to 7.82 million ETH today. That said, the transition has effectively removed 7.82 million ETH out of circulation temporarily.

On the other hand, the total amount of Ether tokens held across all the crypto exchanges have dropped to their record lows. Data from CryptoQuant shows that exchanges now held only 18.1 million ETH compared to 23.73 million ETH an year ago.

The declining ETH reserves show that traders may want to hold their Ether tokens than sell them for other assets. As a result, it creates a supply squeeze for investors looking to enter the Ethereum markets, thus making ETH more valuable.

With EIP 1559 #ethereum supply will likely peak around 120 million, after which it will go down and down and down, meanwhile demand will be rising. Pretty sure that means the number will go up.

A mix of lower supply and higher demand serves as a bullish backstop for the Ether price. Meanwhile, more evidence for an upside breakout comes from a cup and handle pattern on Ether’s longer-timeframe charts.

The Cup and Handle is a bullish continuation pattern, comprising a rounding bottom and a descending channel setup, as shown in the chart below. The structure’s profit target is typically at length equal to the Cup’s maximum height.

Considering the Cup’s resistance level is at near $4,000, a breakout from there expects to send the ETH price to above $6,000, almost double its current rate.

Altcoins take the next leg up after Bitcoin price holds $47.5K