Terra’s (LUNA) three-month rally saw its token rise by 674%, catapulting LUNA to the ranks of potential so-called “Ethereum killers.” LUNA has been on a tear lately because Terra’s most recent upgrade, Columbus-5, has effectively overhauled its tokenomics and brought significant changes to its technology.

Terra is a layer-one blockchain developed by South Korean startup firm Terraform Labs and was released in January 2018. It has a payments-focused ecosystem powered by algorithmic stablecoins and aims to be the infrastructure for all the apps being built by Terraform Labs and the Terra community.

Terra is built using Cosmos, which uses the Tendermint delegated proof-of-stake consensus mechanism. This makes it possible to scale up to thousands of transactions per second along with near-instant finality at much cheaper fees compared to Etheruem. Cosmos is seeing use by other major projects such as Binance Chain, Crypto.com and Cosmos Hub.

Currently, Terra has 139 validators, with a total of 341 million staked LUNA, according to Terra Analytics.

An important detail about the Terra blockchain is that it utilizes a dual token system, which involves Terra (LUNA) and TerraUSD (UST). LUNA serves as the protocol’s utility token, while UST is the native stablecoin.

LUNA’s tokenomics ensure the stability of UST and other stablecoins. UST, on the other hand, is an algorithmic stablecoin introduced in September 2020. This means that UST doesn’t require any centralized or collateralized backing, which helps it avoid dependence on central entities and other centralization issues.

This is contrary to other stablecoins pegged to assets like the United States dollar, as UST’s value against the greenback is maintained by a constant burning of equivalent LUNA tokens. In other words, UST is produced when an equal amount of LUNA is burned.

For instance, if the price of UST goes above $1, the algorithm would burn more LUNA to mint UST and bring the value back to $1. Conversely, if the price becomes less than $1, UST would be swapped to LUNA to prop up the price.

Terra is constructing a strong foothold in the DeFi scene, with its whole ecosystem circled on TerraUSD. Three major decentralized applications (DApp) are already utilizing the stablecoin, including Mirror, Chai and Anchor.

Mirror is a synthetic asset protocol that replicates world stock markets and allows users to invest even if they don’t have regular access to these markets. On the other hand, Chai is like an e-wallet for fast and cheap mobile payments in Korea, but it also plans to expand in other Asian countries, such as Singapore, Thailand and Taiwan. And lastly, Anchor is a savings protocol, providing UST-based fixed-income investments for users. Anchor was introduced in March but has quickly become a popular yield farming avenue, ranking third behind Aave and Compound in TVL.

The long-term value behind Terra is based on the utility of LUNA and the blockchain infrastructure. The DApps in the Terra ecosystem are designed to increase UST demand, reducing the LUNA supply and making it more valuable in the long run.

In August 2021, the listing of Wrapped LUNA and TerraUSD on Coinbase Pro was believed to be one of the catalysts for its rally since, in the past, LUNA was tradable only to a number of non-major exchanges.

Another catalyst is the anticipation of the Columbus-5 upgrade, which brought significant modifications to Terra that enabled higher scalability and greater cross-chain interoperability. The price of LUNA soared from under $10 in July to about $41 on Oct. 6, and its market capitalization is already above the $18-billion mark, earning it the 11th spot in top crypto assets, according to Cointelegraph Markets Pro. 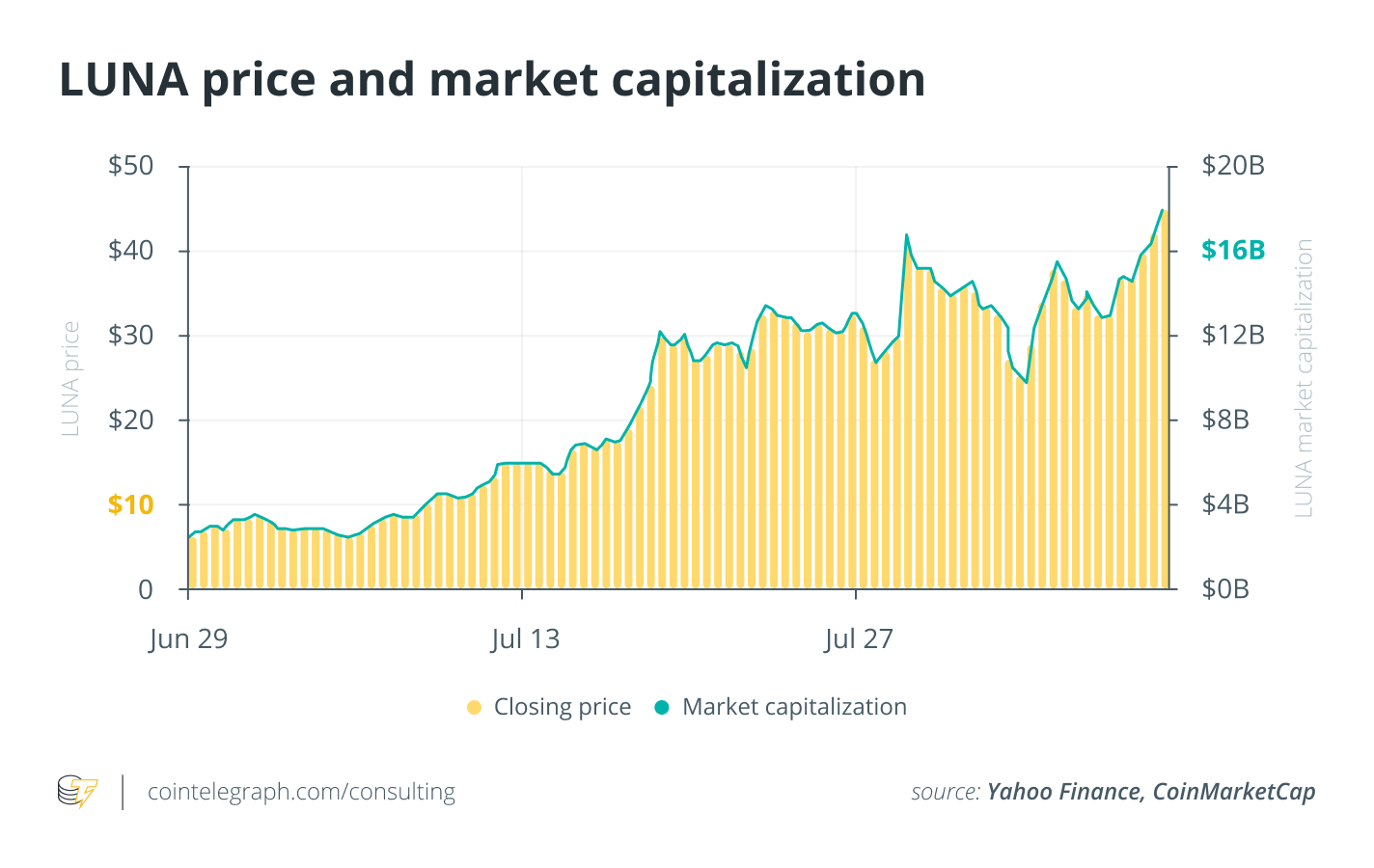 The Sept. 30 Columbus-5 upgrade is deemed to draw a plethora of new projects to Terra, which will put more deflationary pressure on LUNA coins and make the case for a more bullish valuation.

Download the 32nd issue of the Cointelegraph Consulting Bi-weekly Newsletter in full, complete with charts and market signals, as well as news and overviews of fundraising events.

Prior to the upgrade, the burned LUNA tokens go to a community pool so they can be reinvested to build more applications. This burned LUNA is referred to as “seigniorage,” which essentially refers to the face value of the newly issued currency minus their production costs. Post-upgrade, those burned LUNA tokens are burned permanently, making LUNA more scarce.

During the past three months, LUNA experienced a fairly steady supply flow, albeit reduced significantly since February 2021. Up to this point, the total circulating supply of LUNA is under 400 million tokens ($17.6 billion currently), and the total supply reduced is 81 million ($3.6 billion). The effects of the permanent LUNA token burning will gradually be felt in the months to come. 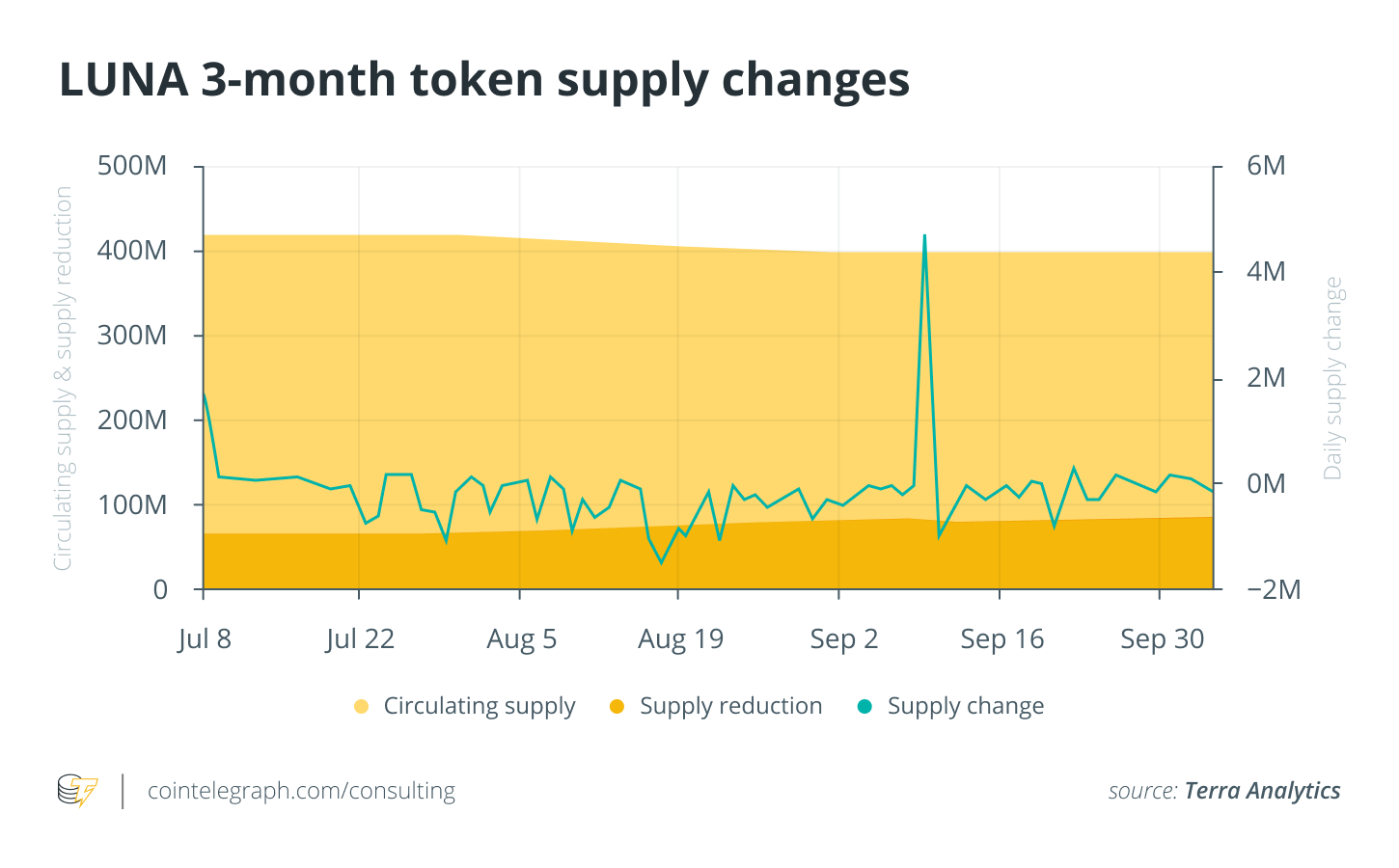 The latest upgrade also enhances Terra’s usability as it opens up to interchain assets in other Cosmos-integrated blockchains such as Solana and Polkadot. This was made possible through Terra integrating with Cosmos’ Stargate protocol. Aside from opening up to more DApps in the Cosmos ecosystem, the Wormhole bridge, which is also part of the Columbus-5 upgrade, is designed to reduce the friction of UST moving to Solana, facilitating tokenized assets to move quickly across chains.

Lastly, another major overhaul is the increased yield for staking LUNA, one of the causes for its increased TVL. With all these factors in play, LUNA token price has been performing above expectations. This is due to how the value of the LUNA token is related to the growth of the Terra blockchain. As the DApps on the Terra blockchain generate more UST demand, this also reduces LUNA’s supply and renders it more valuable for holders.

However, there are two sides to the coin, and it is even more worth mentioning, especially amid the intense race of layer-one blockchains. That other side is the scenario where a sustainable demand for Terra and its stablecoins fails to exist, which would spell trouble for long-term holders of LUNA.

Cointelegraph’s Market Insights Newsletter shares our knowledge on the fundamentals that move the digital asset market. The newsletter dives into the latest data on social media sentiment, on-chain metrics, and derivatives.

We also review the industry’s most important news, including mergers and acquisitions, changes in the regulatory landscape, and enterprise blockchain integrations. Sign up now to be the first to receive these insights. All past editions of Market Insights are also available on Cointelegraph.com.