The research unit of Arcane Crypto predicts the Lightning Network will go parabolic as adoption of the Bitcoin layer-two payment protocol ramps up over the decade.

Arcane Research published the “State of Lightning” report on Oct. 5, and analyzed the Lightning Network in terms of current capacity, wallet payment volume, the growing rate of adoption, and the switch from online services to everyday usage.

The report provides ambitious estimates for the future of the Lighting Network, such as 90% of Salvadorians over the age of 15 having access to Lightning payments by 2026, and 50 million Lightning users, representing $17 billion in annualized payments, for things like remittances and household expenditure by 2030.

Arcane sees gaming and streaming video and audio as a major use case for Lightning with streaming companies such as Spotify or Netflix able to utilize the network for micro-transactions to offer pay per minute, or persecond streaming services, representing an “enormous” chance to onboard new Lightning users.

It forecasts 700 million users in these categories by 2030. Using an estimate of 1 hours per day on these services, and 25% of the time spent on those with Lightning payments, Arcane assumes there will be one micro-transaction per second:

«Our estimate then equals no less than 364 trillion Lightning transactions per year,» the report says.

The research was conducted in collaboration with Bitcoin payments company OpenNode, and highlights how usage of the Lightning Network sharply increased since late last year.  El Salvador’s adoption of Bitcoin (BTC) on Sept. 7 propelled the network ever further:

“In September 2021 growth went parabolic. This was driven mainly by the introduction of Bitcoin as legal tender in El Salvador.”

The report also highlights the significance of peer-to-peer crypto exchange Paxful enabling Lighting payments to its user base of 7 million last month, as well as Twitter’s integration with the network by launching a BTC tipping service for its 186 million users.

Since Lighting went live on Bitcoin nearly three years ago the network has grown to hold a capacity of almost 3,000 BTC, with 17,000 nodes operating on the network and 73,700 unique channels.

“As of writing, the public Bitcoin capacity on Lightning equals more than $120 million, with users across the world finding value in the option to conduct near-instant small payments at very negligible fees,” the report read.

But while publicly available metrics such as total channel capacity show rapid growth in adoption, wallet payment volumes have far out performed that metric since August.

“We have focused on mainstream usage through wallet providers, as we believe this is the best measuring stick of adoption. Therefore, the estimated numbers do not contain the activity from developers, channel rebalancing, most b2b transactions, etc,” the report read.

According to Arcane, wallet payment volume has increased by 20% month-over-month since August, which far exceeds the monthly growth rate of 10% from the metric of channel capacity.

“In September, the discrepancy widened further, with payment volume almost doubling compared to a 26% increase in public channel capacity,” the report read.

El Salvador and other countries

Arcane estimates that close to 90% of the population from El Salvador 15 years or older will have access to Lightning payments by 2026.

The estimate relies on a range of central assumptions such as a 15% yearly growth rate of internet adoption previously seen in 2018 and 2019, along with president Nayib Bukele’s figure of 2.1 million Chivo wallet users from September being correct.

The report predicts that if other countries with “poor banking access” can follow the suit of El Salvador, there could be 50 million Lightning users who would represent $17 billion in annualized payment volume on the network by 2030. 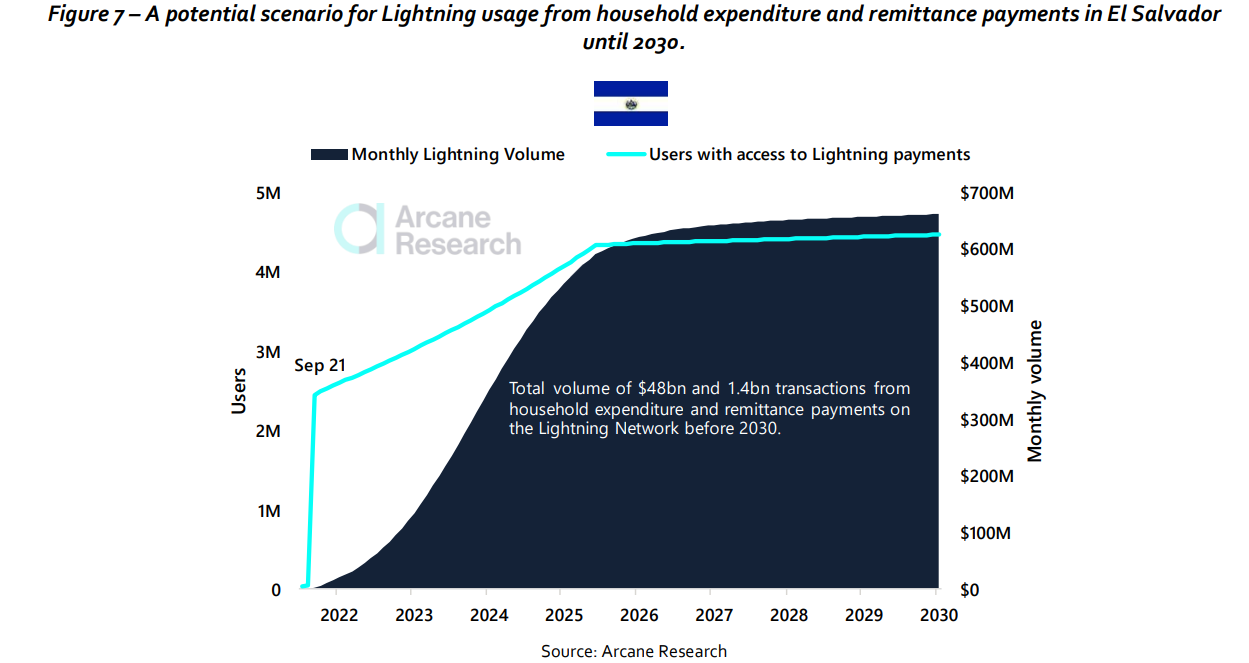 Institutions buying Bitcoin rather than gold as inflation cranks up: JPMorgan