Bitcoin’s (BTC) rally above $50,000 seems to have received a boost from institutional buyers who are looking to hedge their portfolio against increasing inflation, said JPMorgan in a note to its clients on Oct. 7. The bank’s analysts speculated that institutional investors may be preferring Bitcoin over gold as a better hedge against inflation.

A recent study titled “Cryptocurrencies and the Sharpe Ratio of Traditional Investment Models” by crypto asset management firms Iconic Funds and Cryptology Asset Group showed that the addition of cryptocurrencies to any portfolio improved returns and risk-reward performance of the portfolio. 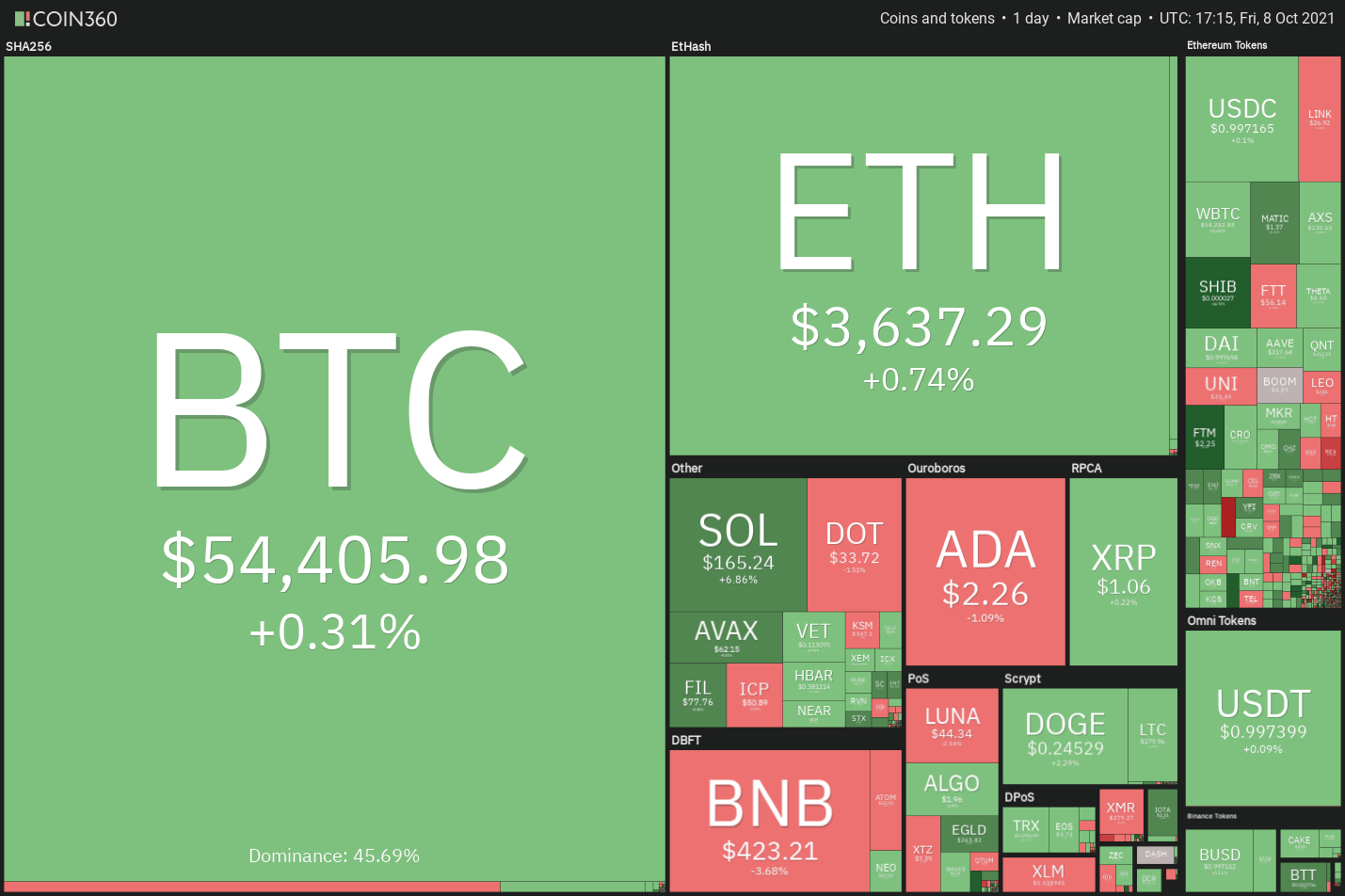 Bloomberg senior commodity strategist Mike McGlone said in the October 2021 edition of the Bloomberg Galaxy Crypto Index that $50,000 on Bitcoin may act as strong support during declines in the fourth quarter.

Could the recent rise in Bitcoin and altcoins attract profit-booking by traders or is this the start of a long-term uptrend? Let’s study the charts of the top-10 cryptocurrencies to find out.

Bitcoin witnessed profit-booking on Oct. 7 but the bears could not pull the price below the breakout level at $52,920, which is a positive sign. The bulls tried to resume the up-move today but the long wick on the day’s candlestick suggests selling at higher levels. 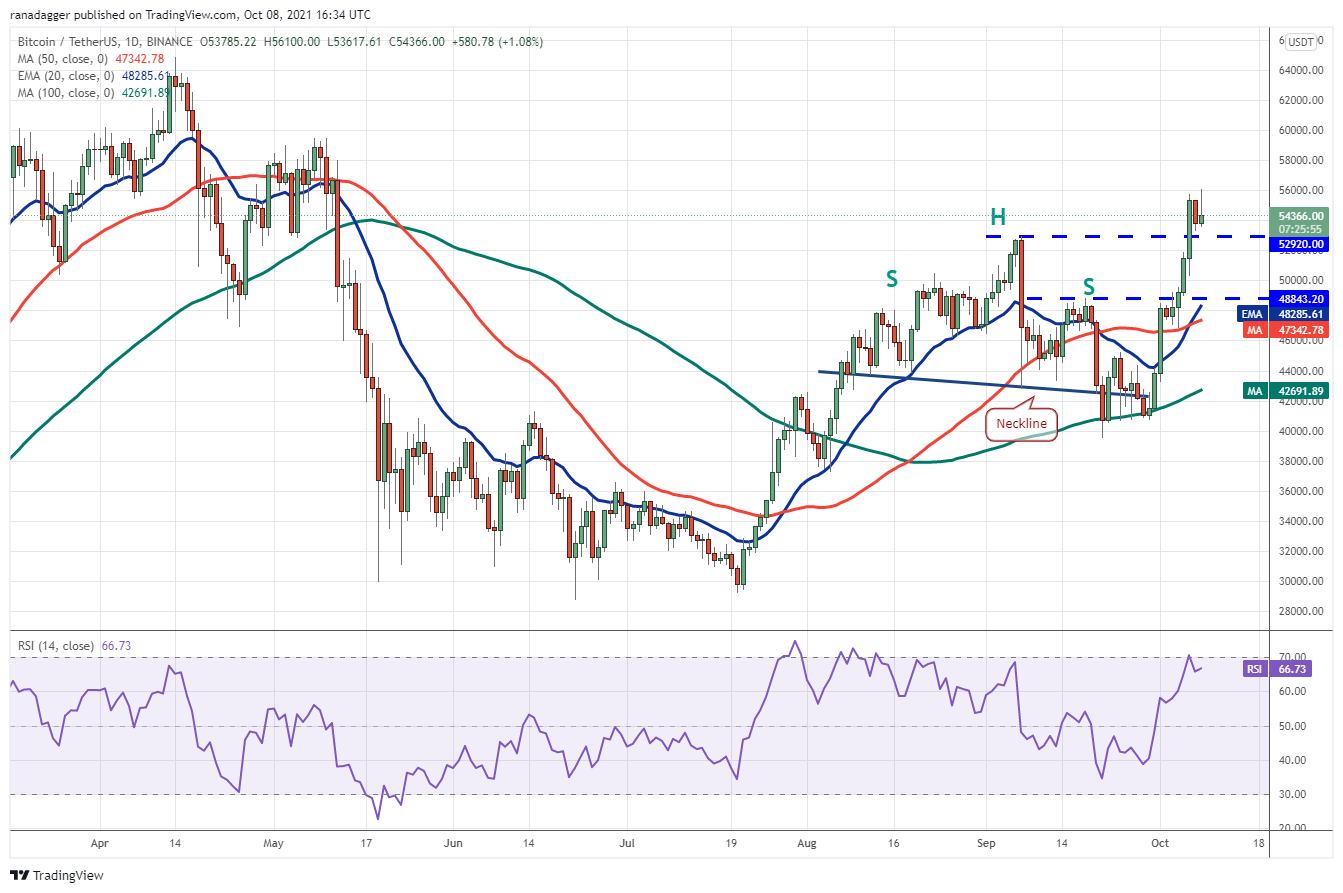 The first support on the downside is $52,920 but if bears pull the price below this level, the BTC/USDT pair could drop to the psychological level at $50,000 and then to the 20-day exponential moving average ($48,285).

The upsloping 20-day EMA and the relative strength index (RSI) near the overbought zone indicate an advantage to buyers. If the price rebounds off the 20-day EMA, the bulls will again try to resume the uptrend.

Ether’s (ETH) recovery rose above the immediate resistance at $3,676.28 today but the bulls may find it difficult to sustain the price above it. The RSI is close to the downtrend line, which could act as a resistance. 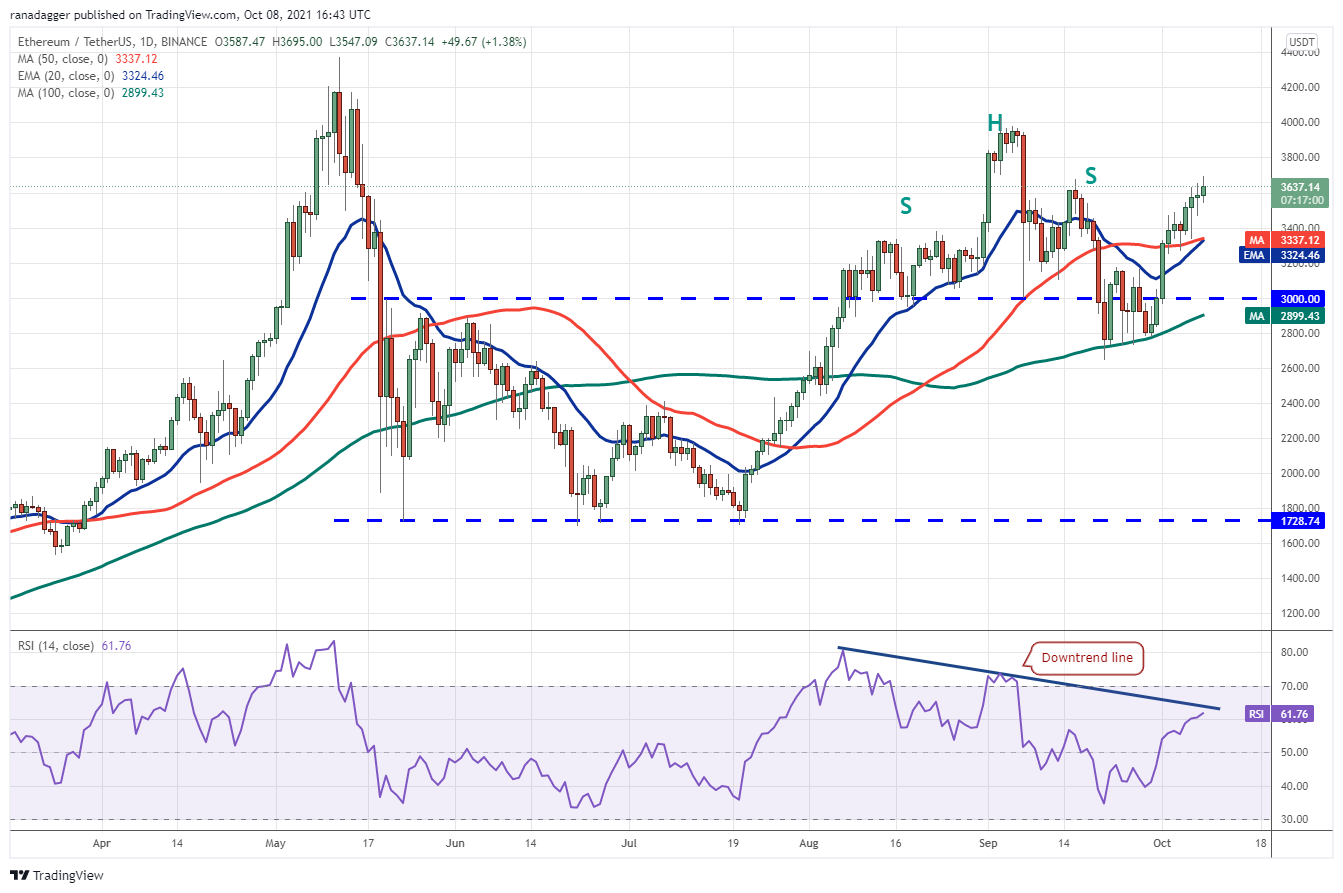 If the price turns down from the current level, the first support is at the 20-day EMA ($3,324). A strong rebound off this level will indicate that sentiment remains positive and traders are buying on dips.

The bulls are struggling to sustain Binance Coin (BNB) above $433, suggesting that demand dries up at higher levels. The price has slipped back below $433 today and the bears will now try to pull the price below the 20-day EMA ($409). 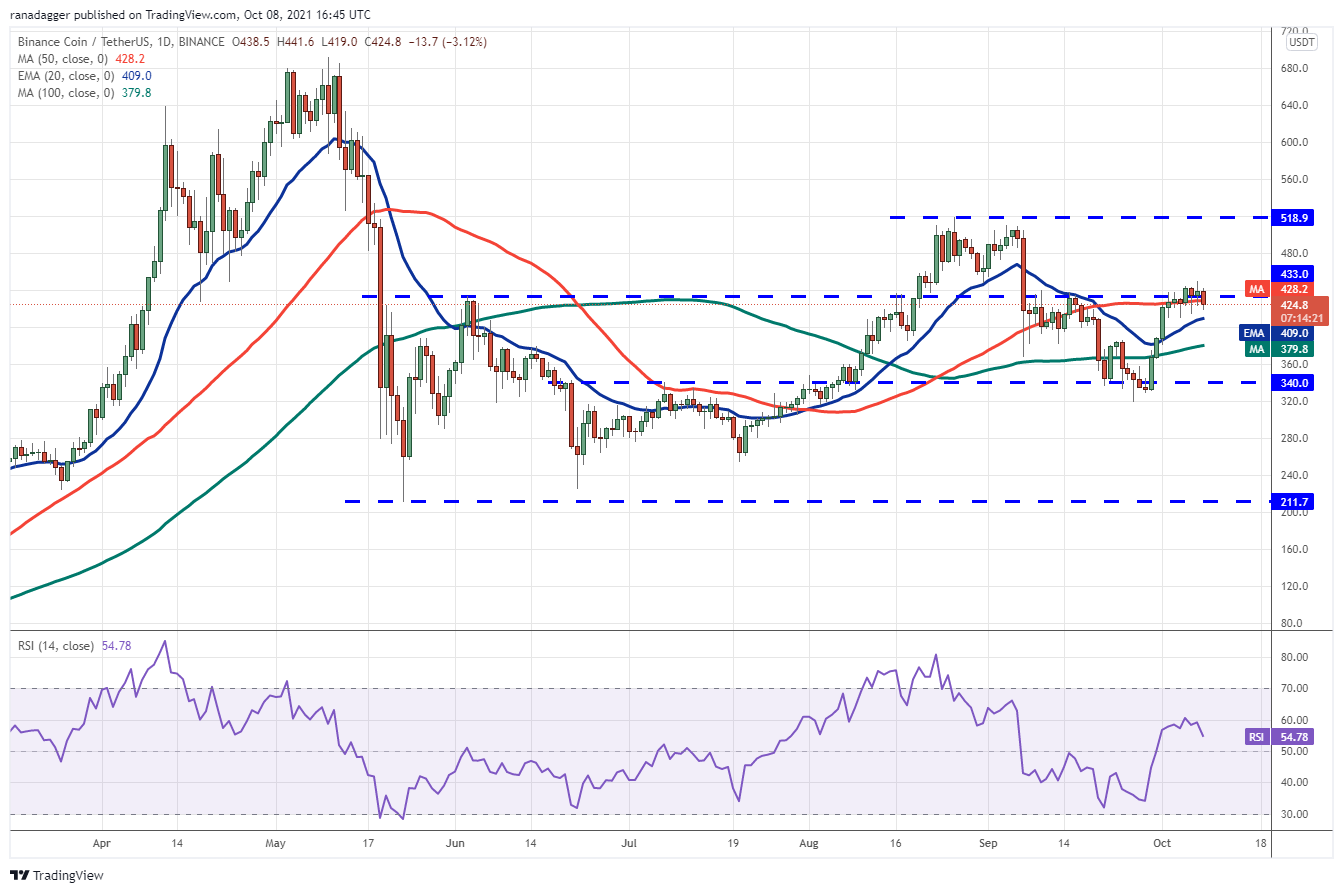 If they succeed, the BNB/USDT pair could slide to the 100-day SMA ($379). Such a move could increase the possibility of the pair remaining range-bound between $320 and $450 for the next few days.

On the other hand, if the price rebounds off the 20-day EMA, it will suggest that the sentiment remains positive and traders are buying on dips. The bulls will then make one more attempt to clear the overhead hurdle at $450 and start the northward march toward $518.90.

After several failed attempts in the past few days, the bulls managed to push and close Cardano (ADA) above the 20-day EMA ($2.25) on Oct. 7. However, the long wick on the day’s candlestick showed that bears are active at higher levels. 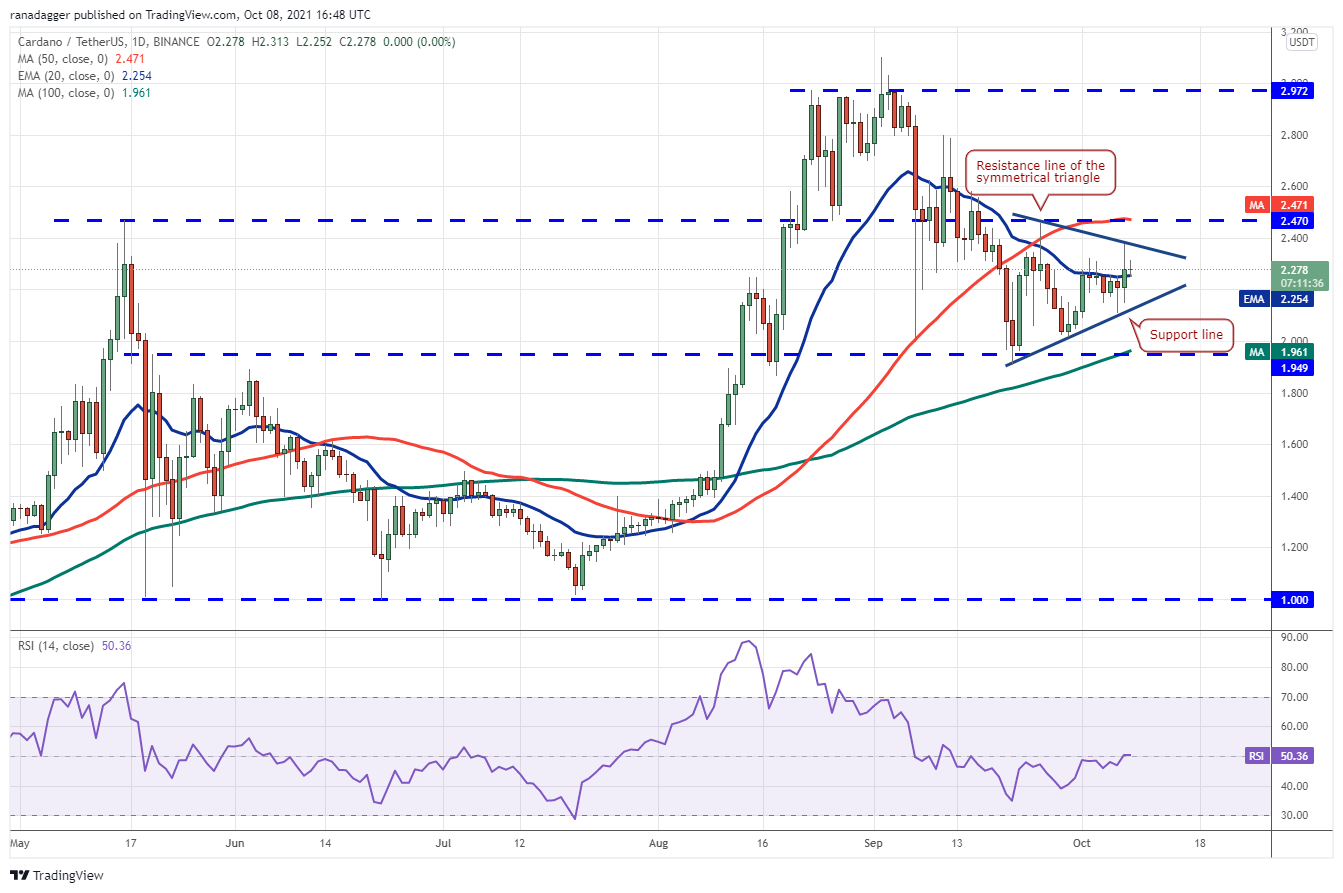 The price action of the past few days has formed a symmetrical triangle pattern, indicating that the bulls and bears are undecided about the next directional move. The 20-day EMA and the 50-day SMA ($2.47) are flat and the RSI is close to 50, indicating a balance between supply and demand.

This demand will tilt in favor of the bulls if the price turns up and breaks above the resistance line of the triangle. The ADA/USDT pair could then rally to $2.47 where the bears may again mount a stiff resistance. A break above this level could open the doors for a rally to $2.80.

Conversely, a break below the support line of the triangle could pull the price down to the 100-day SMA ($1.96).

XRP formed an inside-day candlestick pattern on Oct. 7, indicating indecision among the bulls and the bears. The bulls tried to resolve the uncertainty to the upside today but could not clear the overhead hurdle at the 50-day SMA ($1.09). 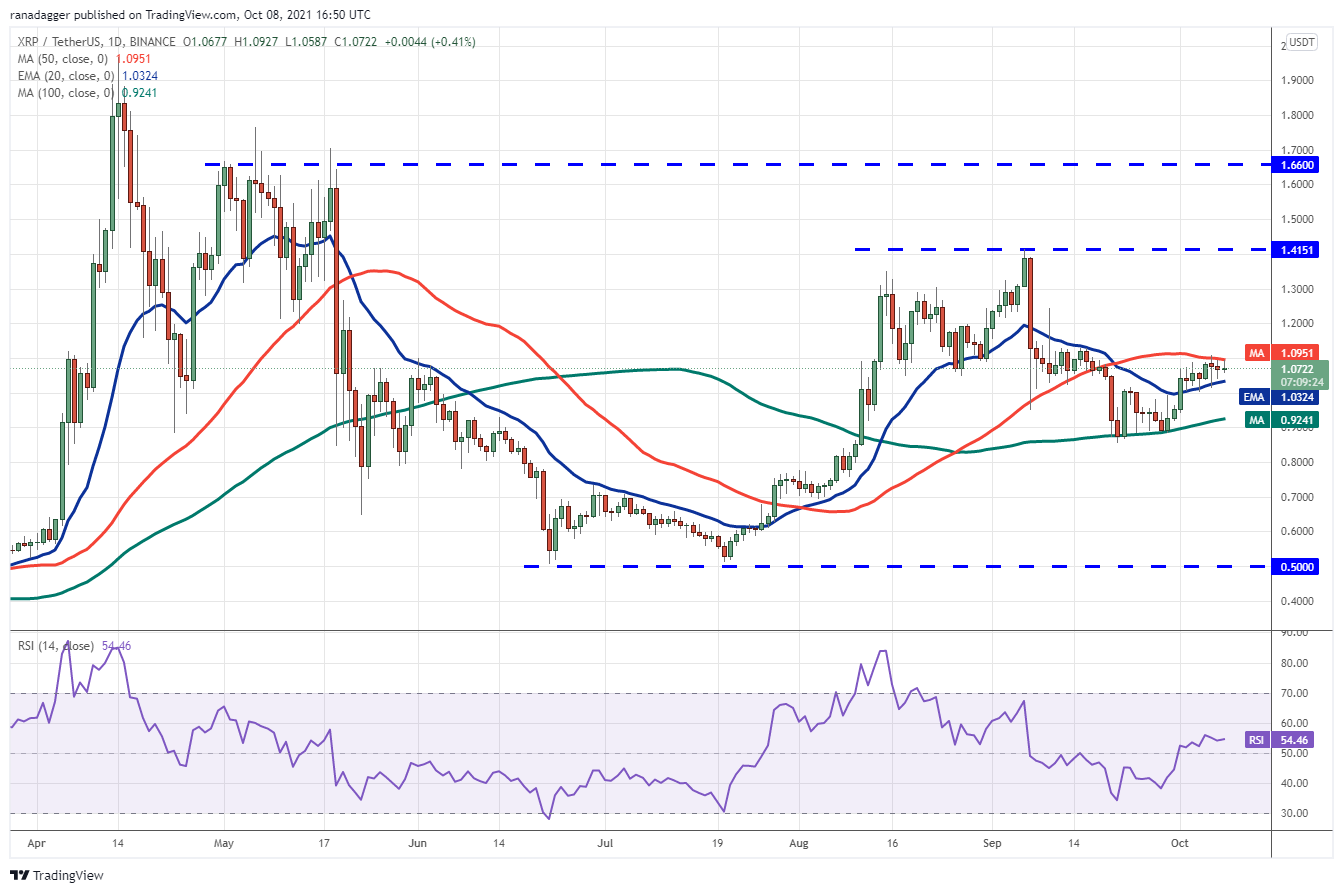 Alternatively, a break below the 20-day EMA could sink the price to the 100-day SMA ($0.92). The bulls have defended this support during the previous two retests and may again try to do that.

The bears failed to sink Solana (SOL) below the 20-day EMA ($153) for the past two days, indicating that bulls are defending the level vigorously. This may have attracted buying from the short-term bulls today, resulting in a strong rebound. 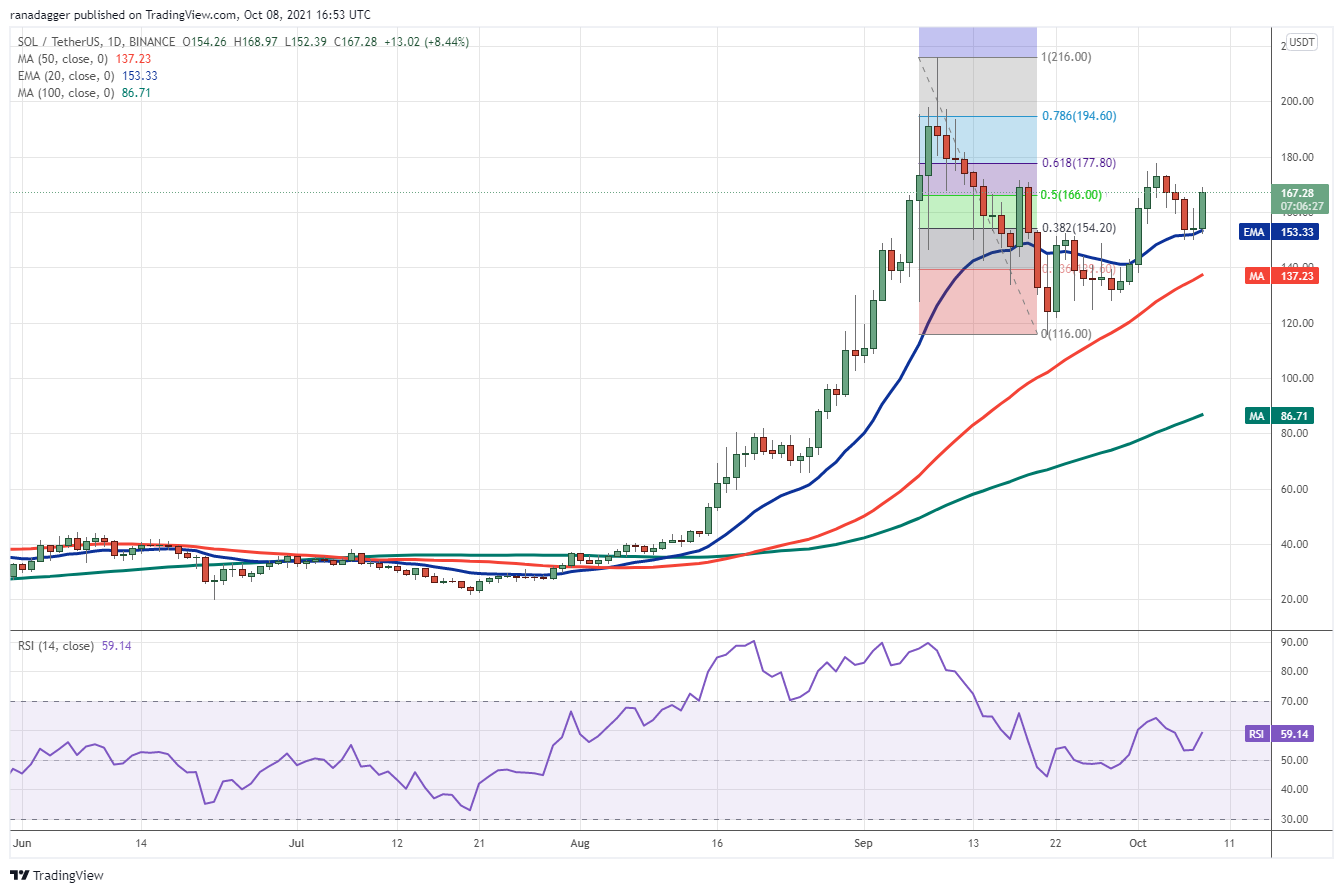 The buyers will now make one more attempt to push the price above the 61.8% Fibonacci retracement level at $177.80. If they can pull it off, the SOL/USDT pair could rally to $200 and then challenge the all-time high at $216.

Alternatively, if the price turns down from the current level or the overhead resistance and breaks below the 20-day EMA, the pair could slide to the 50-day SMA ($137). The bulls may attempt to defend this level but if they fail, the decline may extend to $116.

Dogecoin (DOGE) turned down from the downtrend line on Oct. 6 but the bears have not been able to sink the price below the 20-day EMA ($0.23), indicating buying at lower levels. 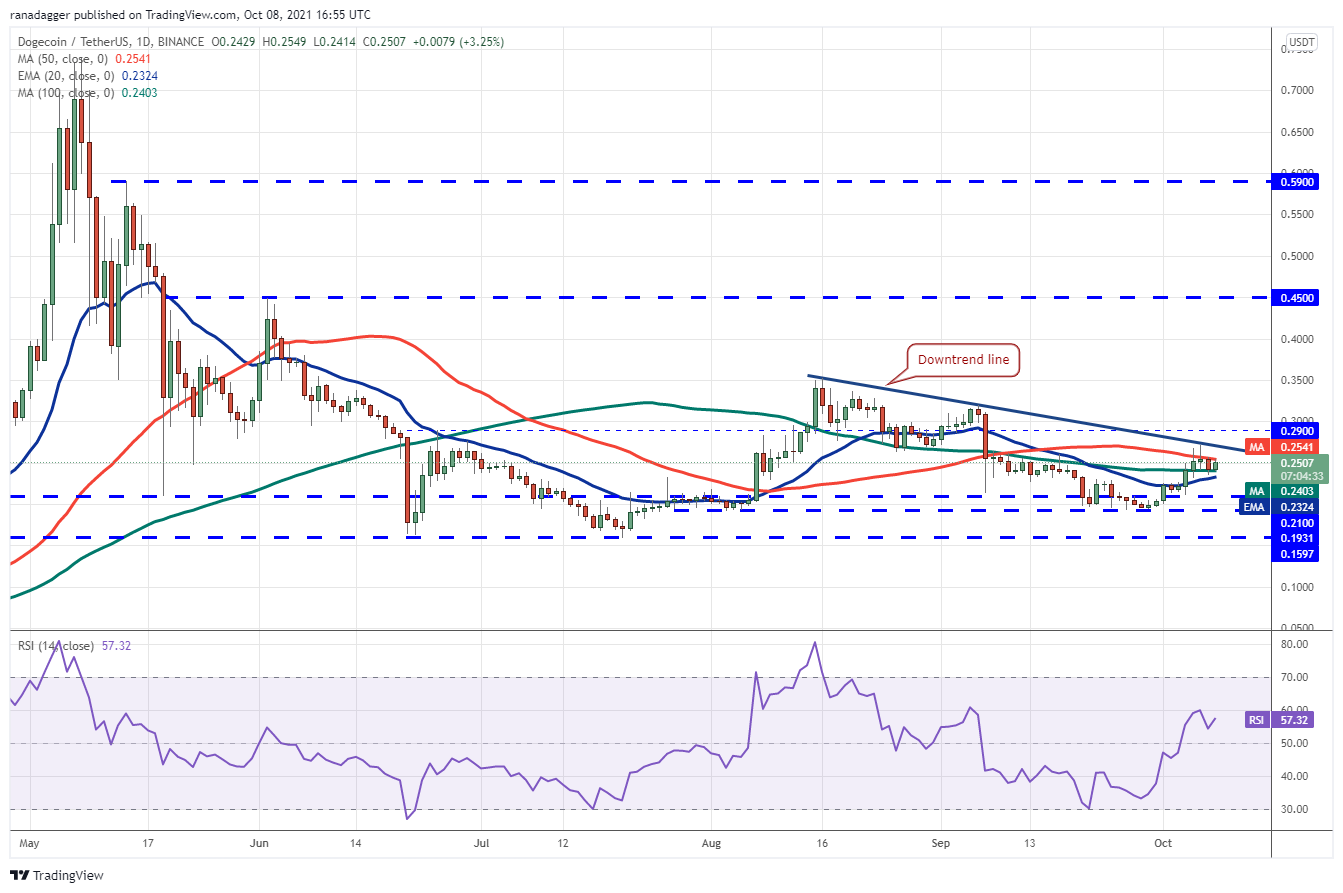 The 20-day EMA has turned up and the RSI is in the positive zone, suggesting that bulls have the upper hand. If buyers propel the price above the downtrend line, the bullish momentum is likely to pick up.

The DOGE/USDT pair could then rally to $0.32 and later to $0.35. Contrary to this assumption, if the price once again reverses direction from the downtrend line, the possibility of a break below the 20-day EMA increases. The pair may then drop to the $0.21 to $0.19 support zone.

Polkadot (DOT) broke above the resistance at $33.60 on Oct. 7 but the long wick on the day’s candlestick suggests selling at higher levels. The inside-day candlestick pattern today signals indecision among bulls and bears. 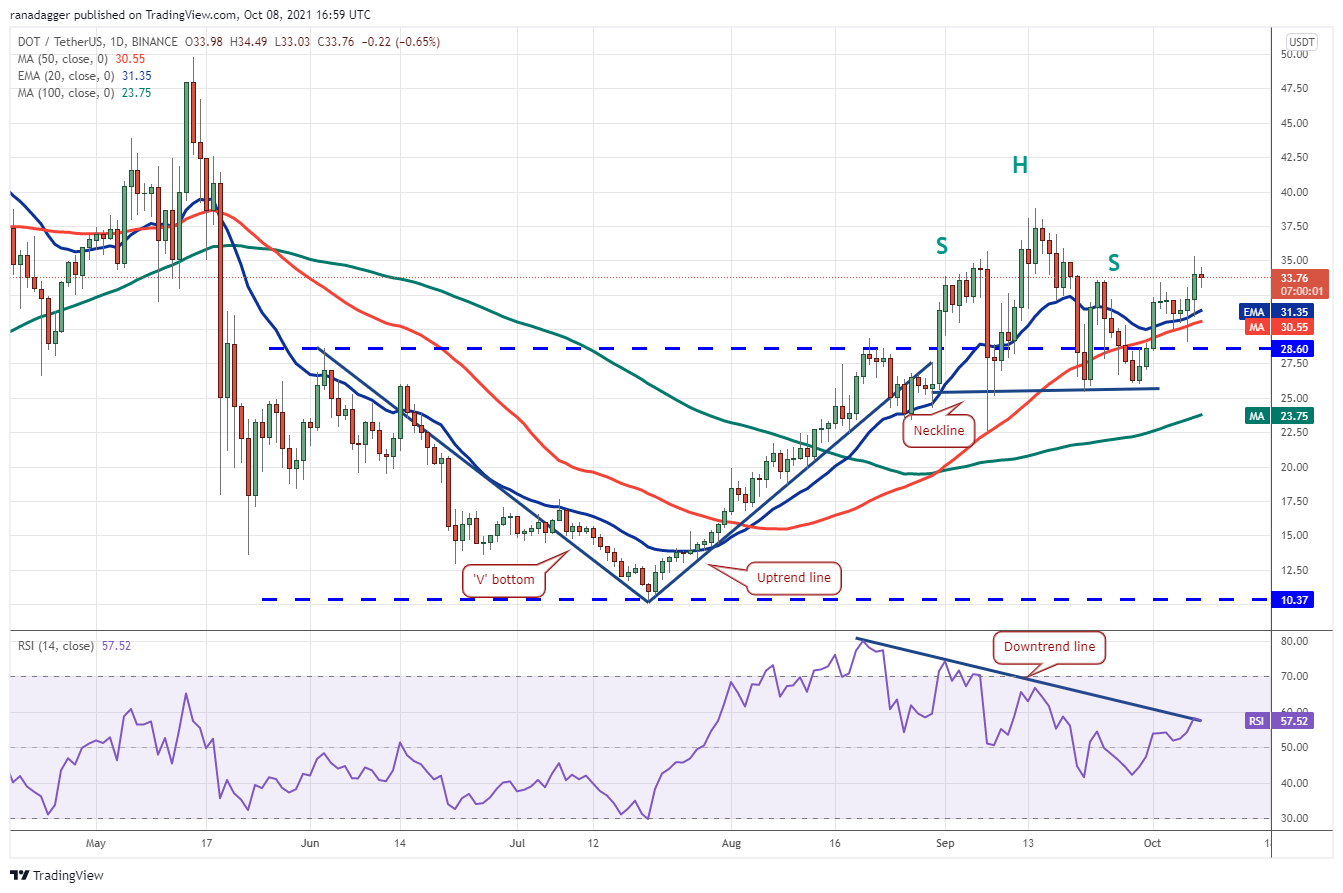 The RSI has reached the downtrend line which has been acting as a stiff resistance. If the price turns down from the current level, the bears will try to pull the DOT/USDT pair below the support at $28.60.

Alternatively, if bulls drive the price above $35.31, the pair could rise to $38.77. The bears may try to defend this level aggressively but if bulls overcome this resistance, the pair could rally to $42.60 and later to $49.78.

Terra protocol’s LUNA token recovered sharply and rose above the overhead resistance at $45.01 on Oct. 7 but the bulls could not clear the overhead hurdle at $49.54 today. This suggests that bears continue to defend the psychological level at $50. 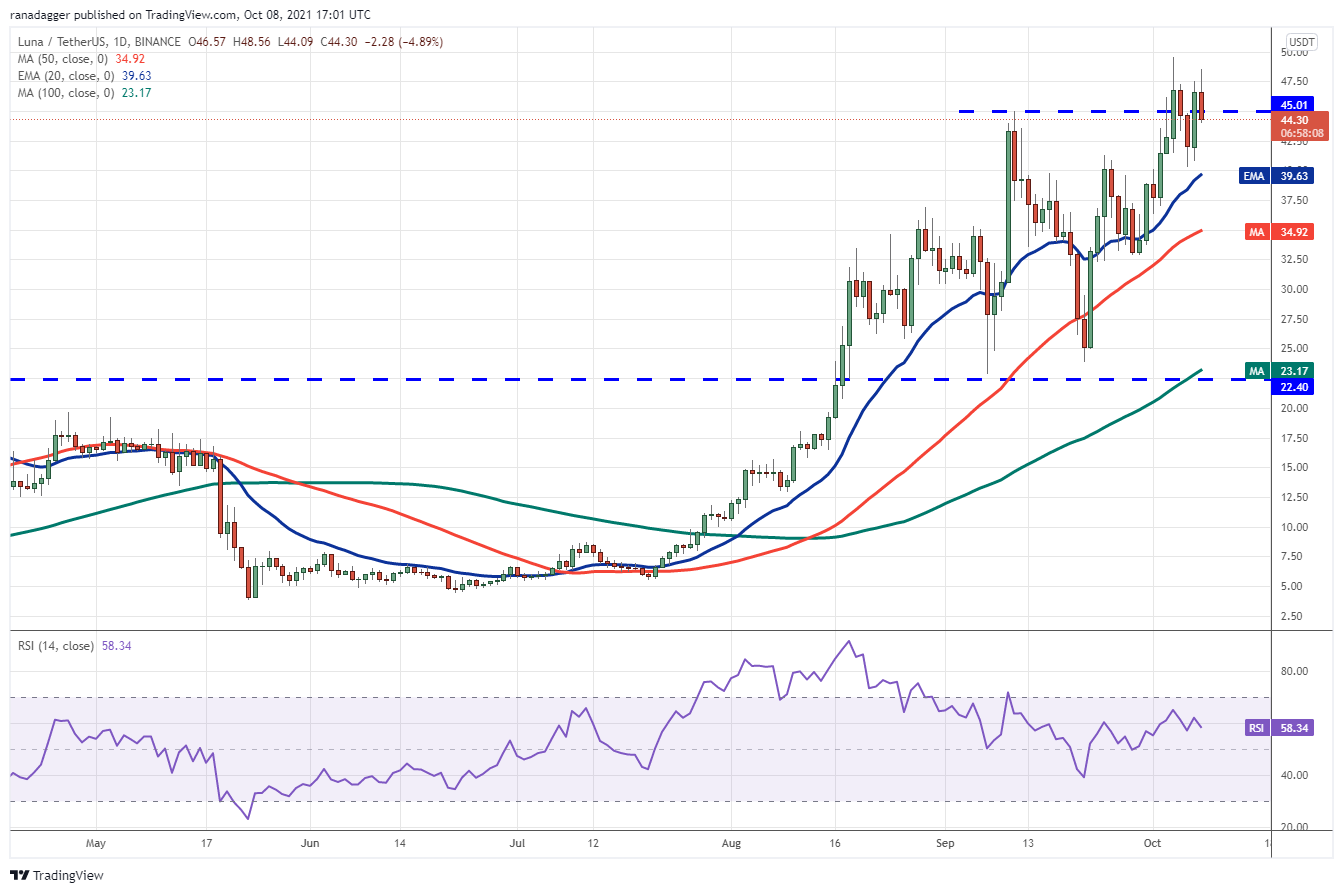 The price has dipped back below $45.01 today and the bears will now try to pull the price down to the 20-day EMA ($39.63). This is an important support for the bulls because a strong rebound off it will suggest that sentiment remains positive and traders are buying on dips.

Uniswap (UNI) seems to be forming the right shoulder of the bullish inverse head and shoulders pattern, which will complete on a break and close above the neckline. 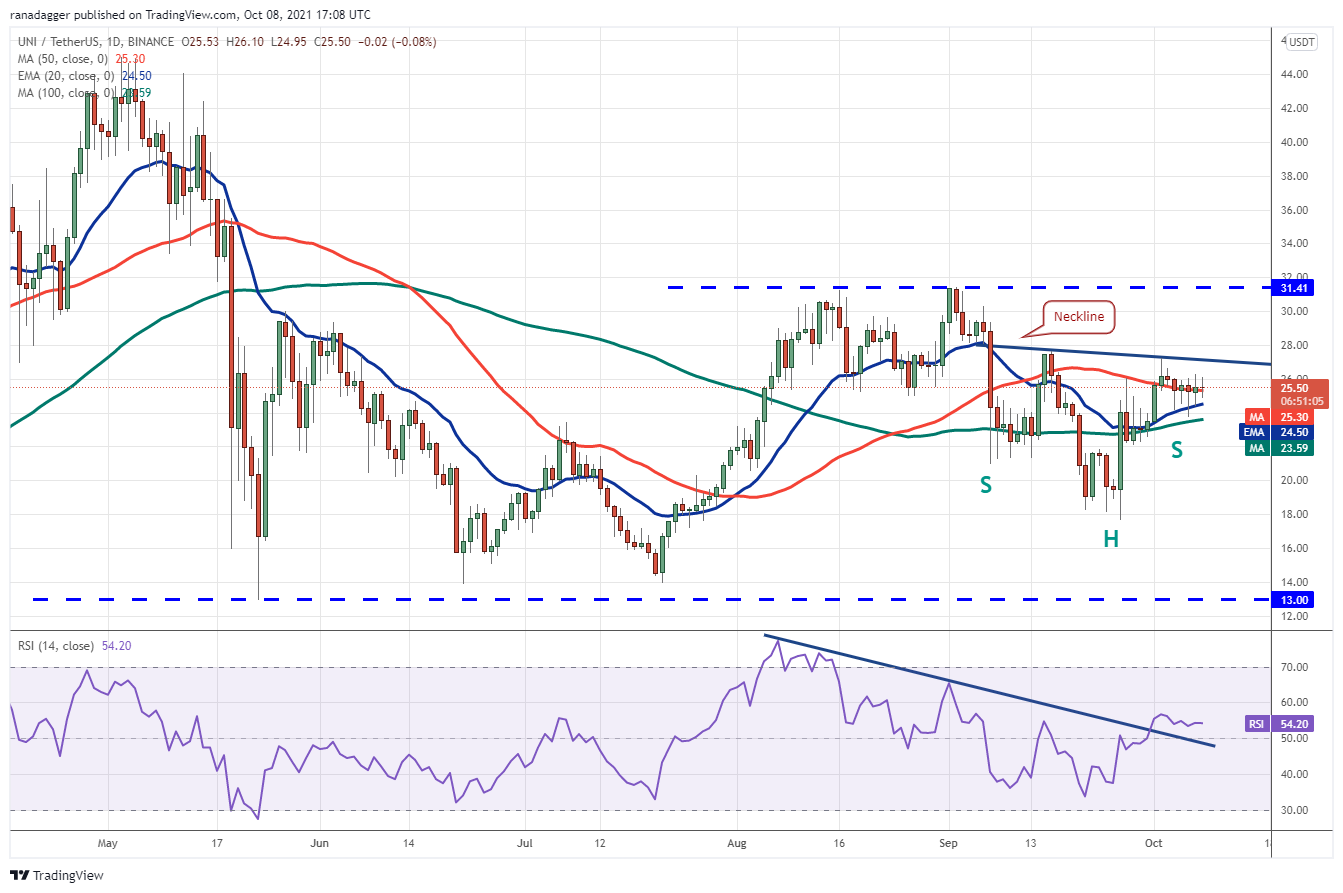 Such a move could push the price to $31.41 and if this level is crossed, the rally could extend to the pattern target at $36.98. The 20-day EMA ($24.50) has started to turn up and the RSI is just above the midway, suggesting a minor advantage to the bulls.

This positive view will invalidate if the UNI/USDT pair turns down from the current level and breaks below the critical support at $22. If that happens, the traders may rush to the exit, pulling the pair down to $18.