Bitcoin (BTC) resumed its rally today and has climbed close to $58,000. This marks an almost 100% recovery from the May plunge and shows that any regulatory action by China is only having a temporary effect.

The strong rally in Bitcoin in the past few days has boosted sentiment and analysts are back with their six-figure projections. Geoffrey Kendrick, head of emerging market currency research at Standard Chartered, anticipates Bitcoin to rally to $100,000 by early next year.

David Gokhshtein, the founder of Gokhshtein Media and PAC Global, was even more bullish as he expects Bitcoin to reach $100,000 before the end of the year. Analyst and trader Rekt Capital believes that Bitcoin will rise much higher than $100,000 in the current cycle.

Could Bitcoin break above the stiff overhead resistance and challenge the all-time high and will altcoins play catch up? Let’s study the charts of the top-10 cryptocurrencies to find out.

Bitcoin’s long wick on the Oct. 10 candlestick shows that bears sold at higher levels but their failure to pull the price below the breakout level at $52,920 seems to have energized the bulls.

Aggressive buying today has pushed the price above the Oct. 10 intraday high at $56,561.31, clearing the path for a possible rally to $60,000. The rising 20-day exponential moving average ($50,196) and the relative strength index (RSI) in the overbought zone indicate that bulls are in control.

If bulls thrust the price above $60,000, the BTC/USDT pair could challenge the all-time high at $64,854. The bullish momentum could pick up further if buyers clear this barrier.

The first sign of weakness will be a break and close below the breakout level at $52,920. This will suggest that traders are booking profits at higher levels. The bears will then sense an opportunity and try to pull the price below the 50-day simple moving average ($47,727).

Ether’s (ETH) turned down sharply on Oct. 10 but the bulls aggressively purchased the drop to the 20-day EMA ($3,369) today. This is a positive sign as it shows that the sentiment remains bullish and traders are buying on dips.

If bulls push and close the price above the neckline, the inverse head and shoulders (H&S) pattern will complete. This reversal setup has a pattern target at $4,657 but the bears are likely to have other plans as they will try to mount a strong resistance at $4,027.88 and then at the all-time high at $4,372.72.

This bullish view will be negated if the price turns down from the overhead resistance and plummets below the 50-day SMA ($3,351). The ETH/USDT pair could then drop to psychological support at $3,000.

Binance Coin (BNB) broke and closed below the 50-day SMA ($425) on Oct. 8. The bulls tried to push the price back above the 50-day SMA on Oct. 9 but failed, inviting selling by short-term traders.

The BNB/USDT pair plunged below the 20-day EMA ($409) on Oct. 10 but the bears could not take advantage of this opportunity. Strong buying at lower levels has pushed the price back above the 20-day EMA today.

If bulls propel the price above the 50-day SMA, the pair could rise to the neckline. A break and close above this level will complete the inverse H&S pattern. The pair may then rally to $518.90 and if this level is crossed, the rally may extend to the pattern target at $554.

Cardano (ADA) is trading inside a symmetrical triangle, which generally acts as a continuation pattern. If bears sink and sustain the price below the support line of the triangle, the correction could resume. 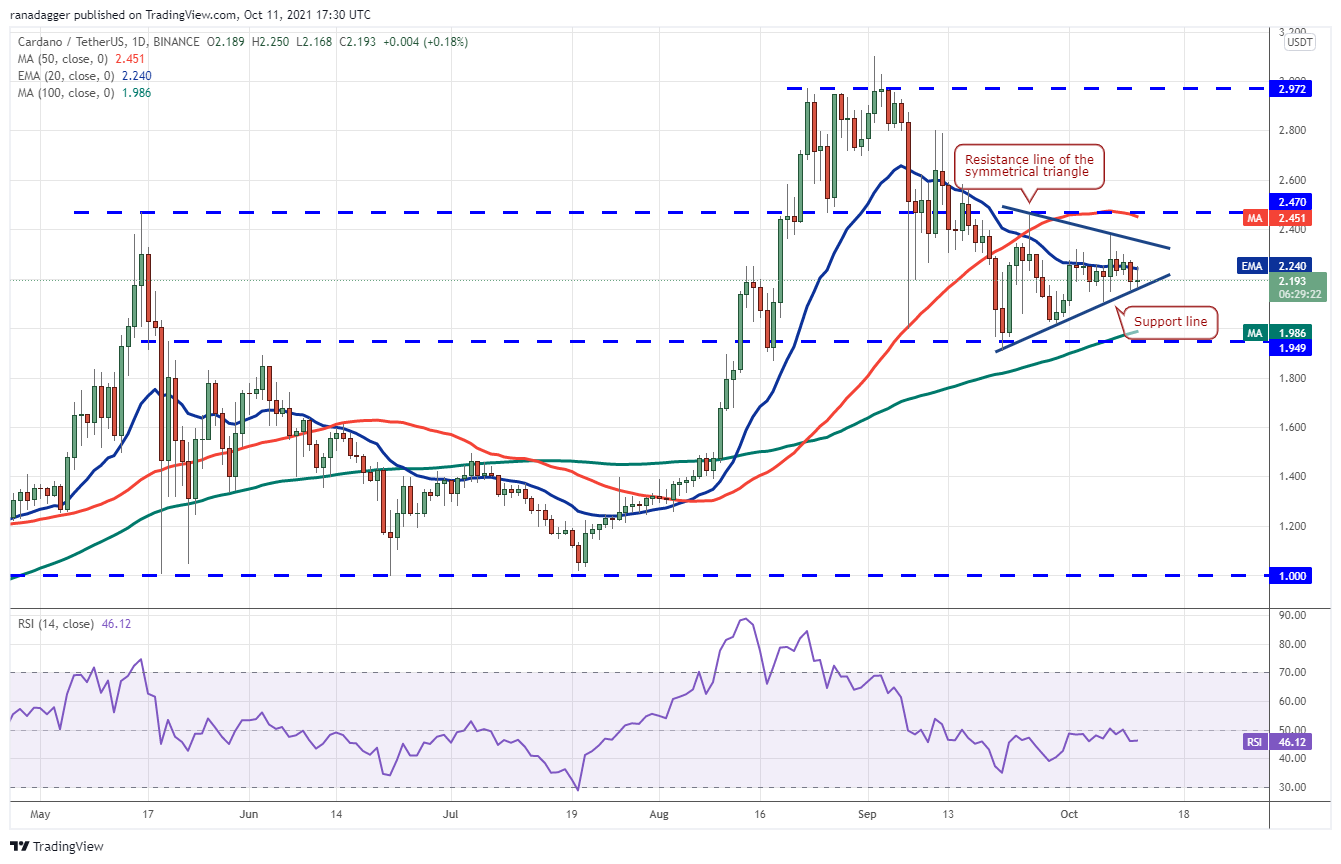 The flattish 20-day EMA ($2.24) and the RSI just below the midpoint, do not give a clear advantage either to the bulls or the bears. The bulls will try to arrest the decline at $1.94 but if they fail to do so, the selling could accelerate and the ADA/USDT pair could drop to $1.60.

The tight range trading in XRP resolved to the upside on Oct. 9 with a break and close above the 50-day SMA ($1.08). However, the long wick on the Oct. 10 candlestick shows that bears are defending the minor resistance at $1.24. 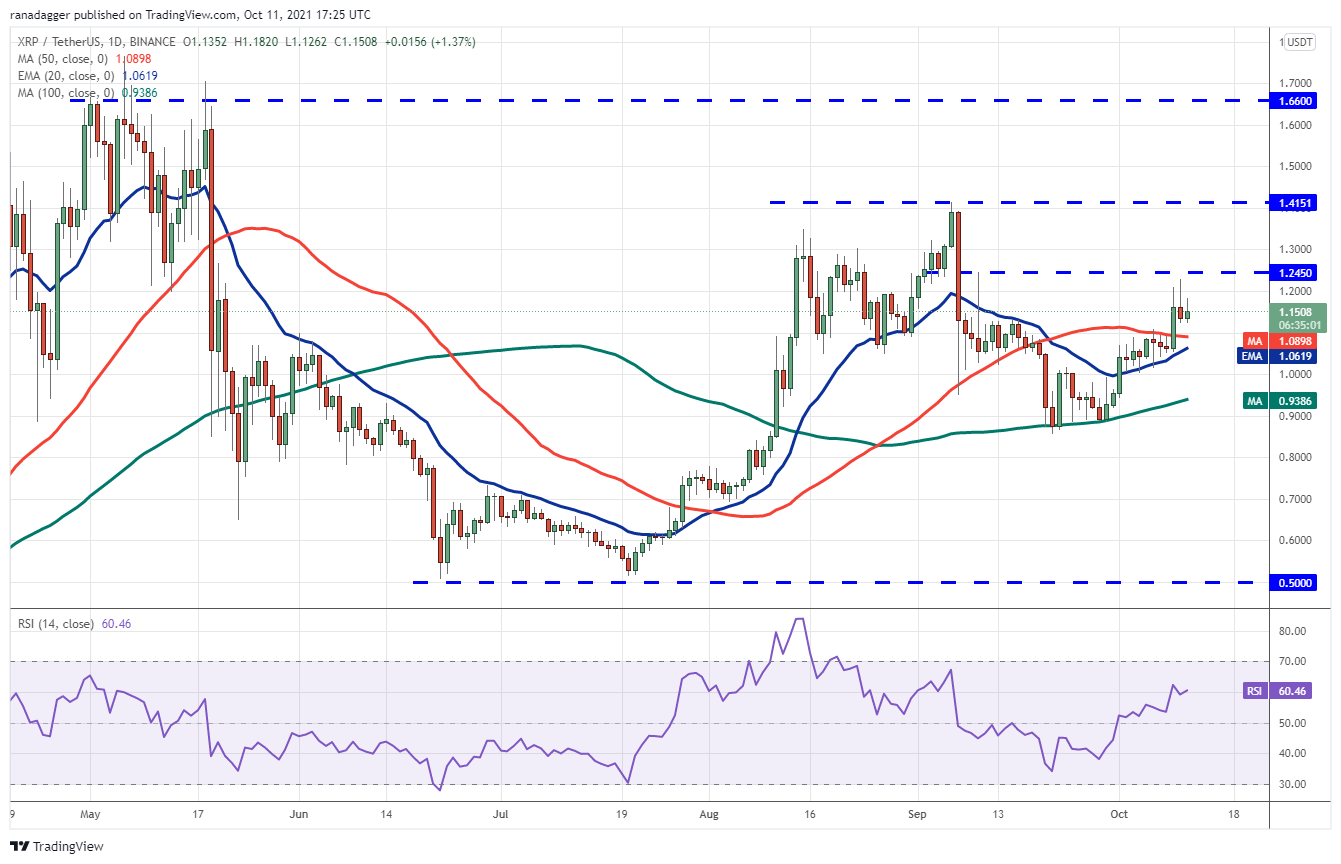 If bulls do not give up much ground from the current level, the possibility of a break above $1.24 increases. The 20-day EMA ($1.06) is sloping up marginally and the RSI is above 60, signaling advantage to buyers.

A break and close above $1.24 could push the XRP/USDT pair to $1.41. This may prove to be a difficult obstacle to overcome but if crossed, the pair could rally to $1.66. This bullish view will invalidate if the price turns down and breaks below the 20-day EMA. That could pull the price down to $1 and then to the 100-day SMA ($0.93).

Solana’s (SOL) weak bounce off the 20-day EMA ($151) on Oct. 8 and 9 suggests a lack of aggressive buying by the bulls. Supply exceeded demand on Oct. 10 and the price slipped below the 20-day EMA. 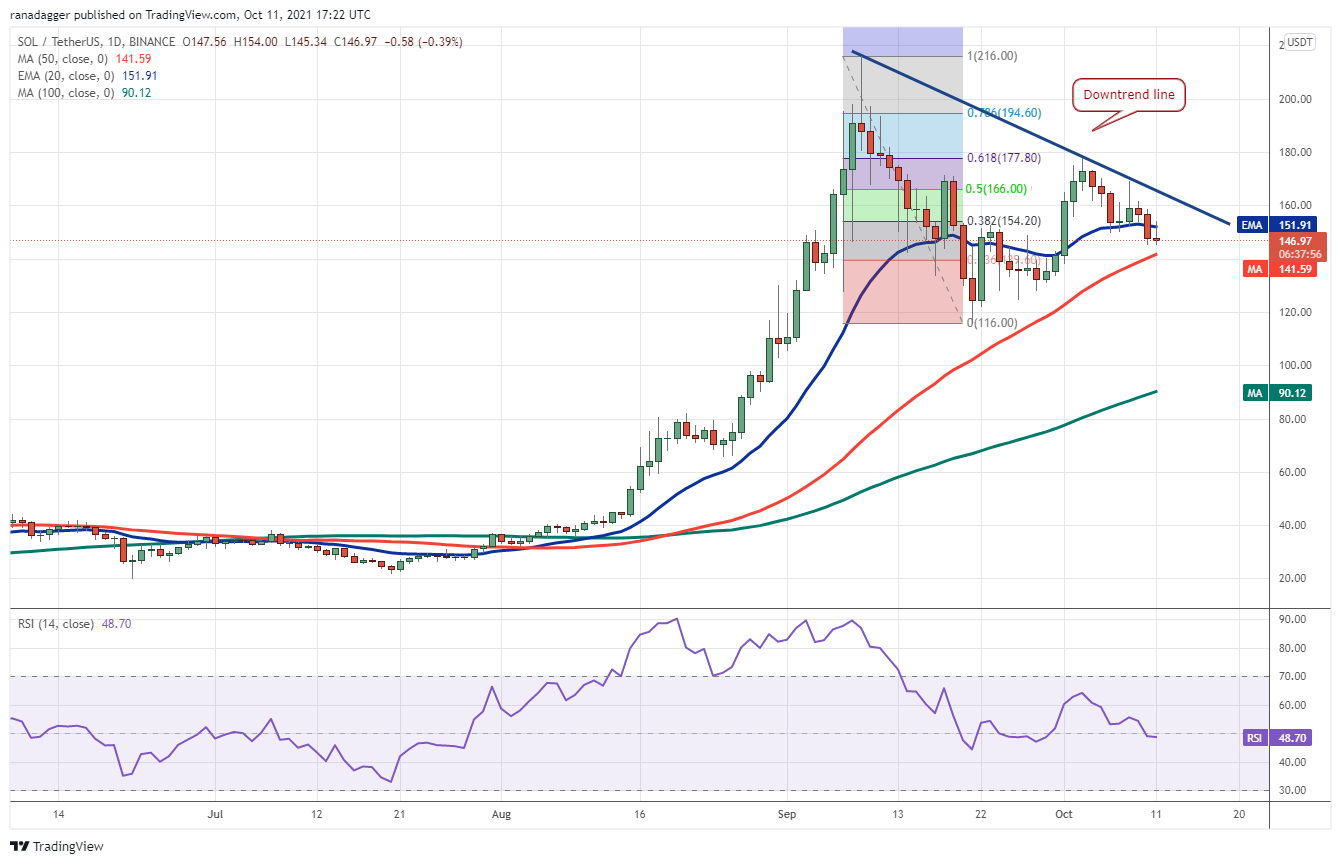 The bulls will now try to defend the 50-day SMA ($141). They will have to push and sustain the price above the downtrend line to signal that the selling pressure is easing. The bullish momentum could pick up on a breakout and close above the 61.8% Fibonacci retracement level at $177.80.

Conversely, if the price turns down and breaks below the 50-day SMA, the SOL/USDT pair could drop to the strong support at $116. This is an important level for the bulls to defend because if it cracks, the pair could plummet to the 100-day SMA ($90).

Although bulls defended the 100-day SMA ($0.24) on Oct. 8 and 9, they could not push Dogecoin (DOGE) above the 50-day SMA ($0.24). This suggested that demand dries up at higher levels. The bears took advantage of this situation and pulled the price below the moving averages on Oct. 10. 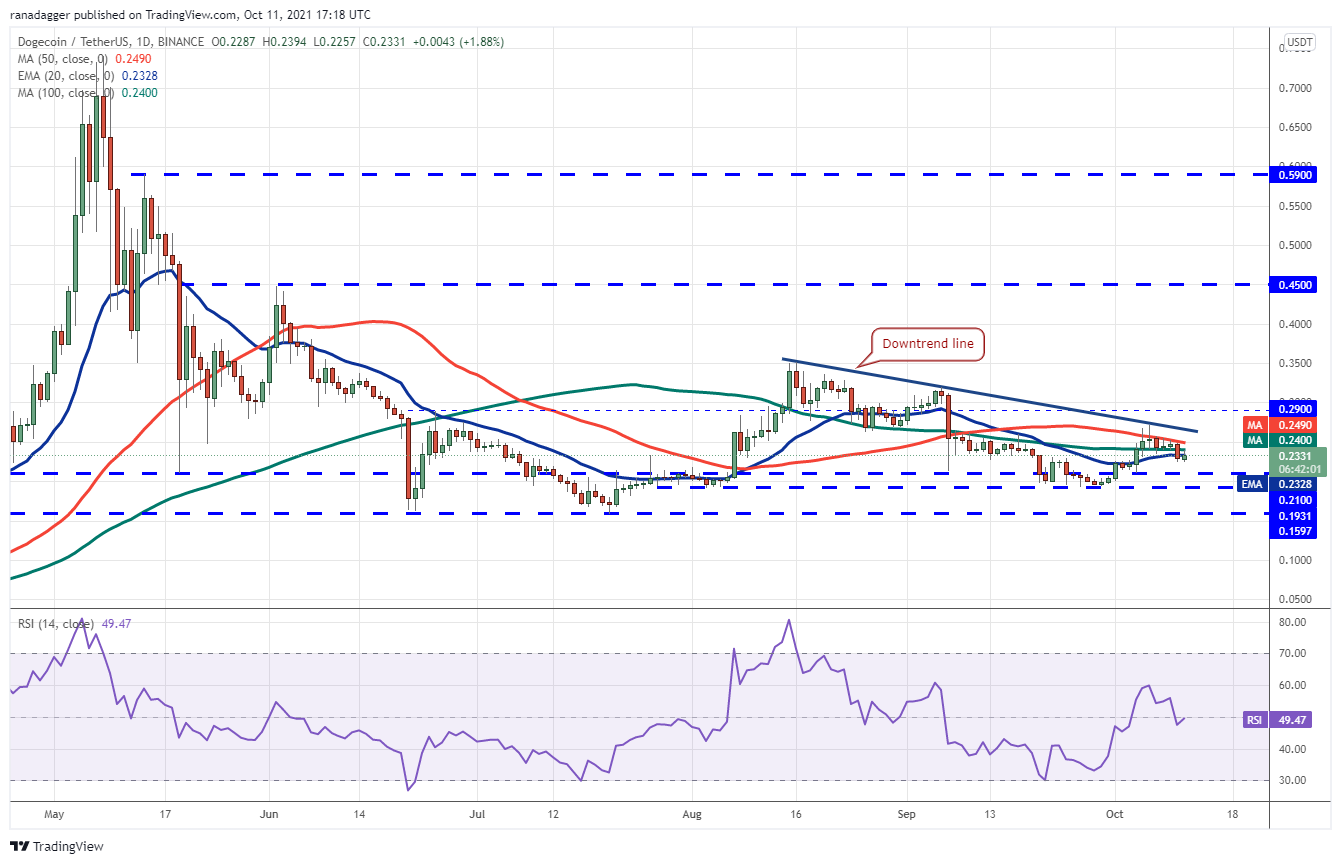 If bulls fail to push the price back above the moving averages quickly, the DOGE/USDT pair could drop to the $0.21 to $0.19 support zone. The bears will have to break this support zone to gain the upper hand.

On the contrary, if the price turns up and breaks above the moving averages, the bulls will make another attempt to push the price above the downtrend line. If they pull it off, the pair could start an up-move $0.32 and later to $0.35.

Polkadot (DOT) has been range-bound between $25.50 and $38.77 for the past many days. The price turned down from $37.45 on Oct. 10, suggesting that bears are defending the overhead resistance. 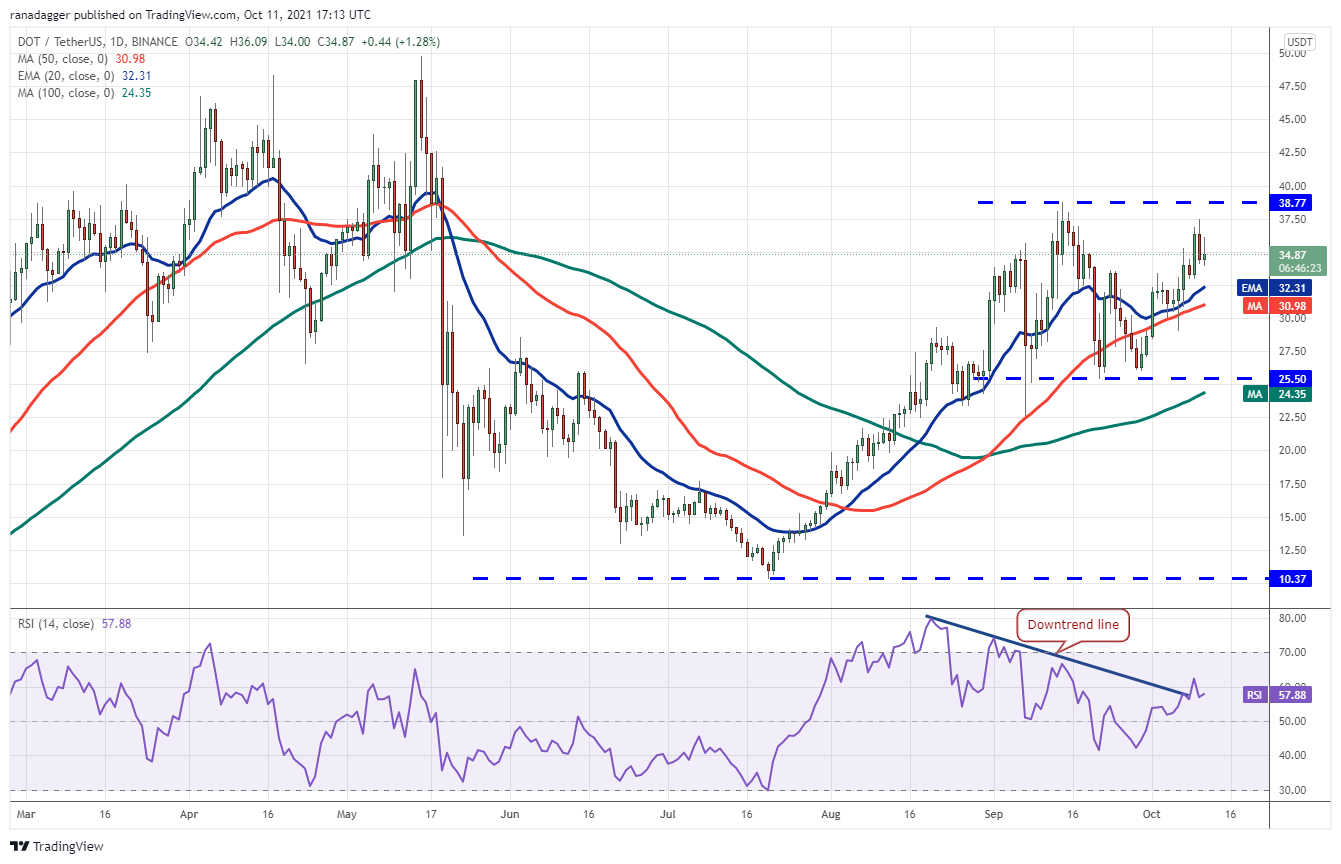 The gradually upsloping moving averages and the RSI in the positive territory signal a modest edge to the buyers. A breakout and close above $38.77 will be the first sign of the resumption of the up-move.

The pattern target of the breakout from the rectangle pattern is $52.04. Alternatively, if bears sink the price below the moving averages, it will indicate that the DOT/USDT pair could extend its stay inside the range for a few more days.

Terra protocol’s LUNA token turned down from $48.56 on Oct. 8, indicating that bears are aggressively defending the overhead resistance at $50. The failure to break above the resistance may have prompted short-term traders to book profits. 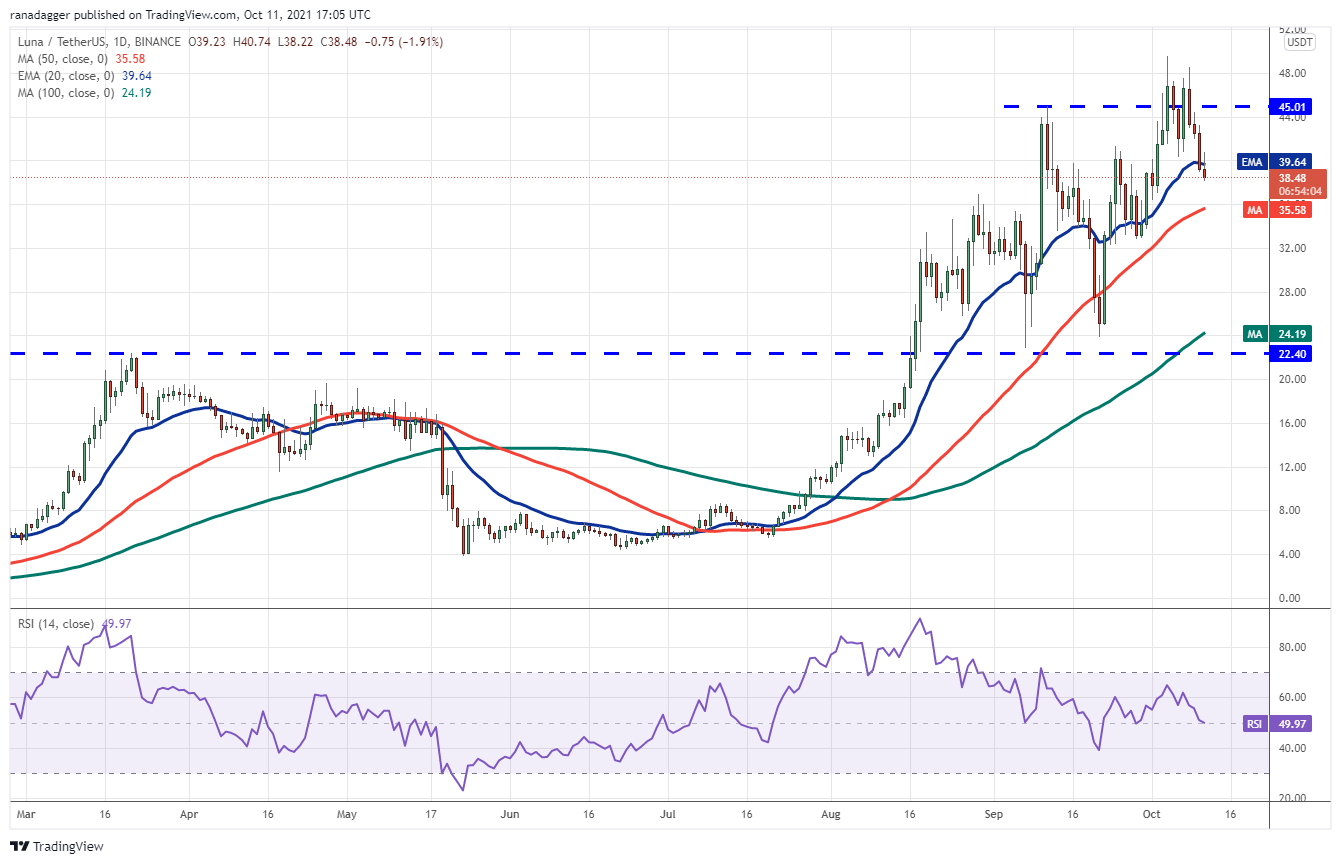 The LUNA/USDT pair slipped and closed below the 20-day EMA ($39.64) on Oct. 10. Efforts by the bulls to reclaim the level have met with strong selling today, indicating that the sentiment has turned negative and traders are closing positions on every minor rally.

The next support on the downside is the 50-day SMA ($35.58) and if this level gives way, the decline could extend to $32.50. Conversely, if the price turns up from the current level and rises above the 20-day EMA, the bulls may again try to push the pair above the overhead resistance. 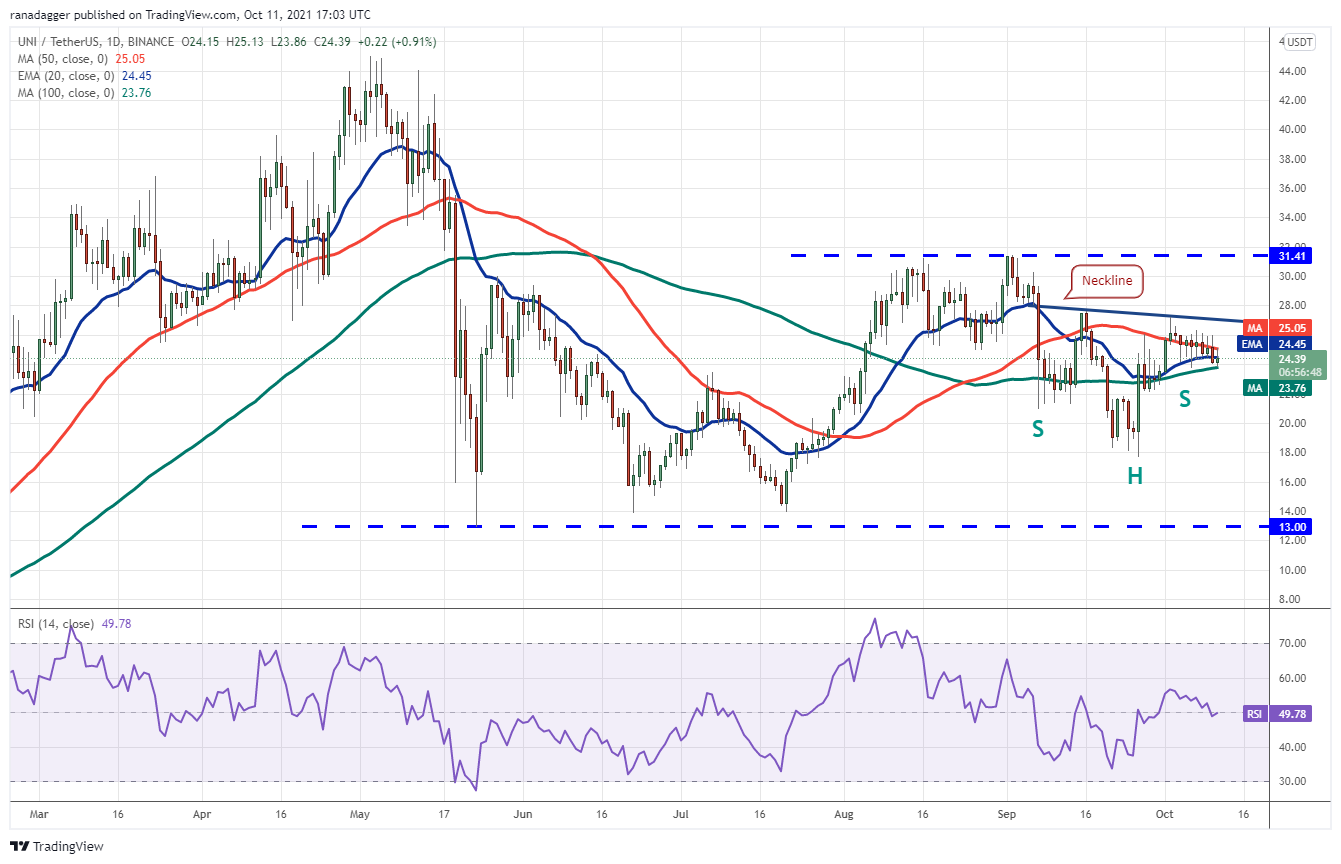 If they succeed, the UNI/USDT pair could rise to the neckline of the inverted H&S pattern. The bullish momentum could pick up if buyers push and sustain the price above this resistance. The pair could then begin its ascent toward the pattern target at $36.98.

Contrary to this assumption, if bears pull the price below the 100-day SMA, the pair could drop to $22. This is an important level for the bulls to defend because if it is breached, the selling could intensify and the pair may drop to $18.