Ether dropped in value against Bitcoin by almost 25% after topping out in September at 0.07955 BTC. As the top altcoin declined, it left behind a trail of lower highs and lower lows, thus forming an Ascending Channel.

Later, ETH/BTC broke the Channel to the upside on Oct. 23, raising anticipations about a strong extended recovery trend. But a selloff on Oct. 24 and the ongoing session had traders test the Channel’s resistance trendline as support.

The sentiment raised Ether’s possibility to re-enter the falling range, as shown in the chart below. 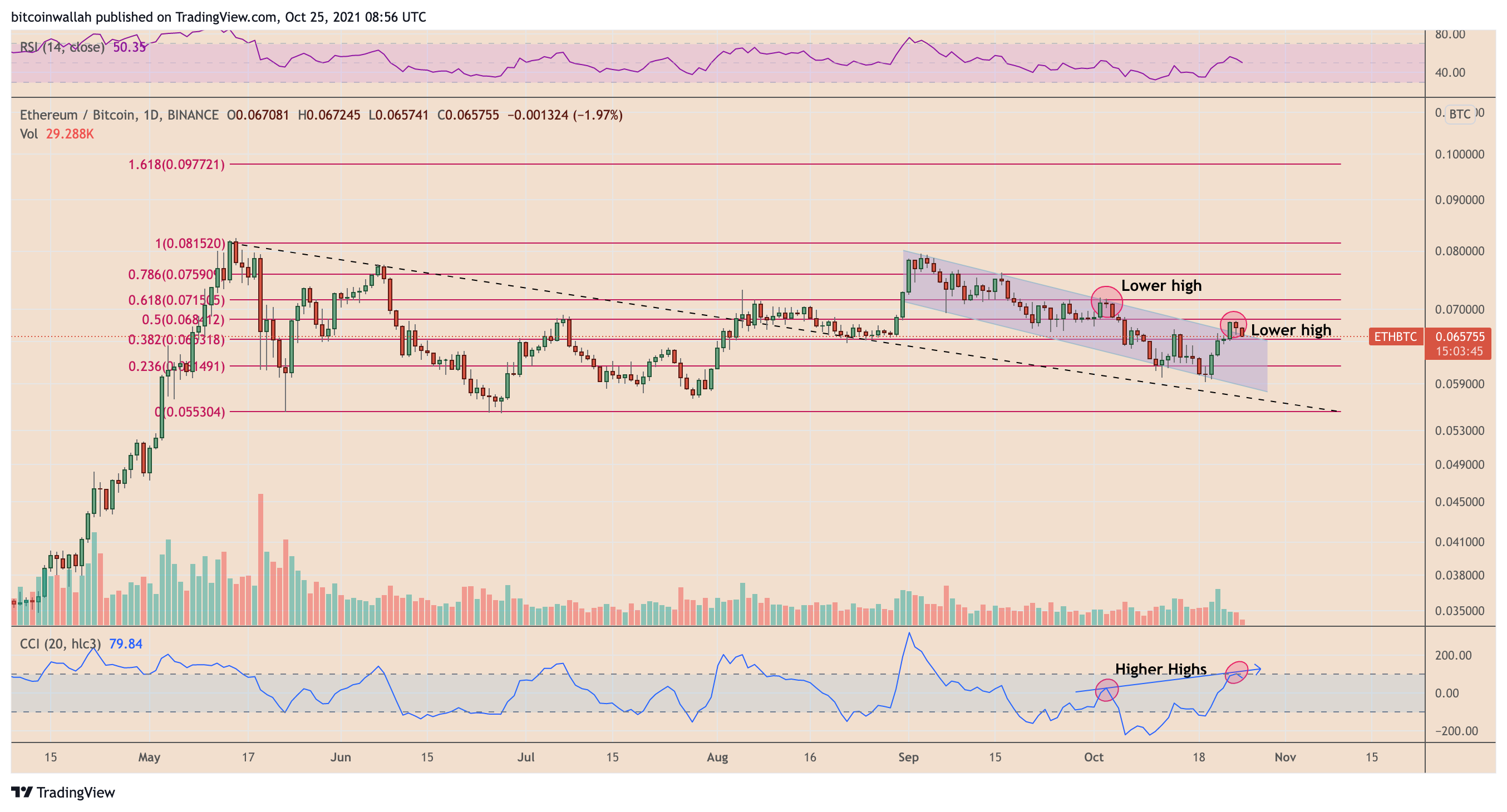 At the same time, the formation of higher highs in ETH/BTC’s daily Commodity Channel Index (CCI) showed hidden divergence against the pair’s downtrend. For the uninitiated, CCI is a momentum oscillator that measures an instrument’s variations from its statistical mean to spot potential reversals.

«A hidden divergence is always an indicator for a possible trend reversal,» noted Stefan Krecher, a Germany-based market strategist, adding that ETH/BTC may rebound in the coming sessions also as the pair’s daily relative strength index (RSI) remains «not overbought.»

Krecher anticipated Ether to hit its monthly pivot point around 0.071586 BTC, almost over 8% the current levels. The upside target also coincided with the 0.618 Fib line (0.071505 BTC) of the Fibonacci Retracement graph in the chart above.

On the flip side, re-entering the Descending Channel range risked sending ETH/BTC to its range support trendline near 0.058238 BTC.

The bullish ETH/BTC price outlook appeared as Ether held $4,000 as solid support while rebounding over 2.6% Monday. Meanwhile, Bitcoin’s price retraced almost 3.5% after setting up a similarly strong price floor near $60,000.

As a result, ETH/BTC merely looked weaker because Bitcoin rallied strongly against the dollar than Ether. Nevertheless, the Ethereum token’s prospects looked bullish, as earlier reported by Cointelegraph with the aid of an Ascending Triangle setup shown below.

Ether broke out of the pattern on the daily timeframe but with little trading volume, showing weakness in the price trend.

The cryptocurrency now tests the Triangle’s upper trendline as support for bullish confirmation. Should a rebound follow suit, the price could eye new record highs above $4,384, with the Triangle setup’s target sitting near $6,500.

Additionally, the supply of Ether tokens has been declining after the Ethereum network’s London Hard Fork. Namely, the EIP-1559 improvement proposal, which went live with the update, started burning ETH that it previously paid to miners.

Data collected from WatchTheBurn.com shows that the Ethereum network has destroyed almost $2.25 billion worth of ETH tokens since the London Hard Fork’s launch.

Related: Altcoins breakout even as Bitcoin price falls to $60,000

Additionally, the Ethereum 2.0 deposit contract has attracted more than 8 million ETH, thereby removing them from circulation for at least a year.

Why now? SEC took eight years to authorize a Bitcoin ETF in the US