A yearlong price rally in the Bitcoin (BTC) market and hopes for more upside moves in the future has prompted traders to hold the token instead of trading it for other assets, Glassnode data shows.

The blockchain data analytics service revealed Thursday that the total amount of «hodled or lost coins» reached a nine-month high of over 7.21 million BTC. In simple terms, the Bitcoin metric reflected an increase in out-of-circulation tokens — those that may have been stored in cold wallets by long-term holders or got lost due to human errors, with a minimum chance of recovery.

In simple terms, the Bitcoin metric reflected an increase in out-of-circulation tokens — those that may have been stored in cold wallets by long-term holders or whose private keys are lost forever for various reasons. 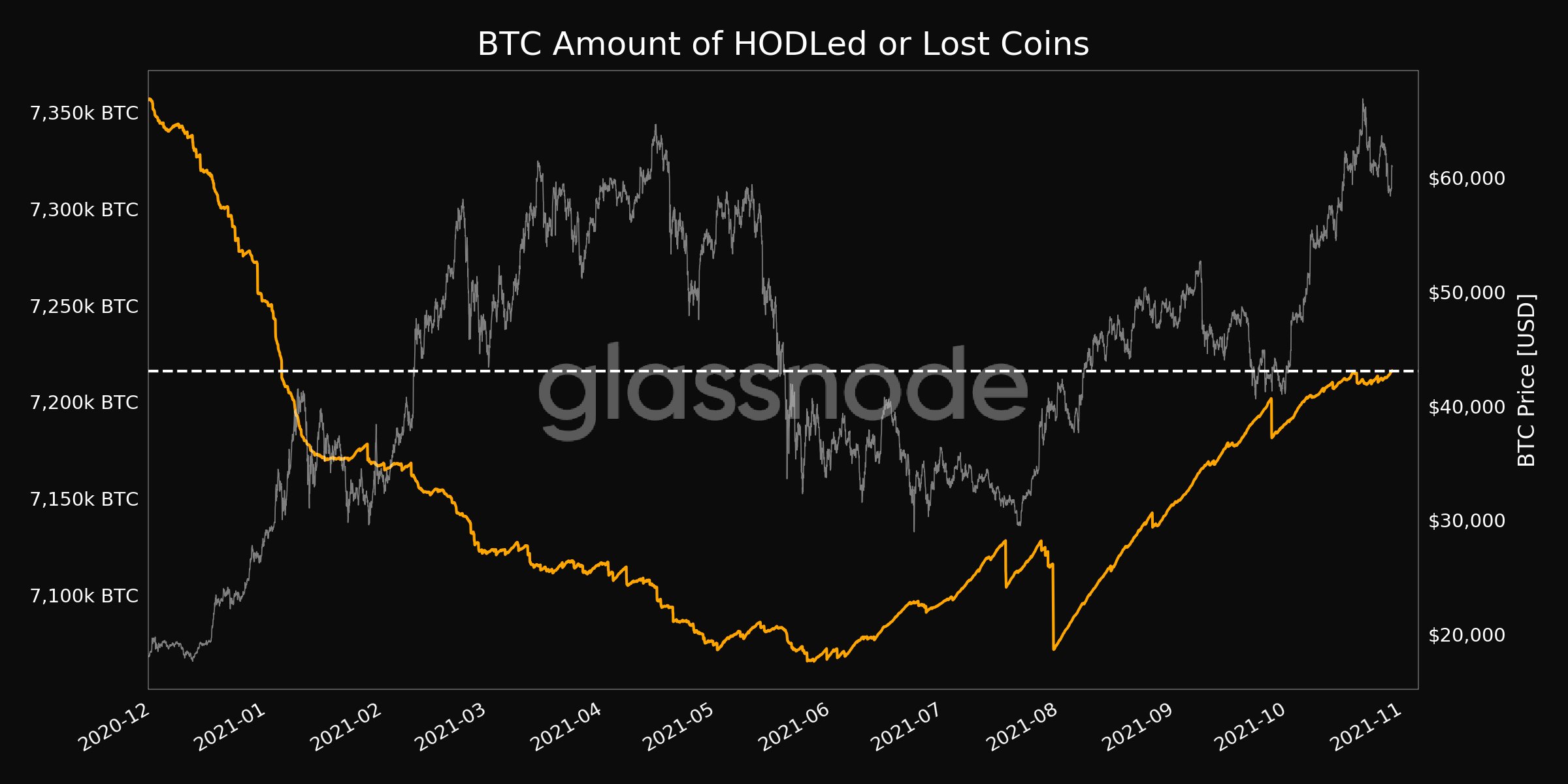 As a result, the total number of lost/hodled Bitcoin exceeded 34% of its total supply of 21 million tokens, making the cryptocurrency scarcer.

Further data provided by CryptoQuant showed that the amount of Bitcoin reserves held across all the crypto exchanges dropped to its lowest level since August 2018 — at 2.337 million BTC on Oct. 28, 2021.

Meanwhile, the Miners Position Index (MPI), which measures the ratio of BTC leaving all miners’ wallets to its 1-year moving average, has been treading below zero since March 6, 2021, suggesting strong accumulation among miners. 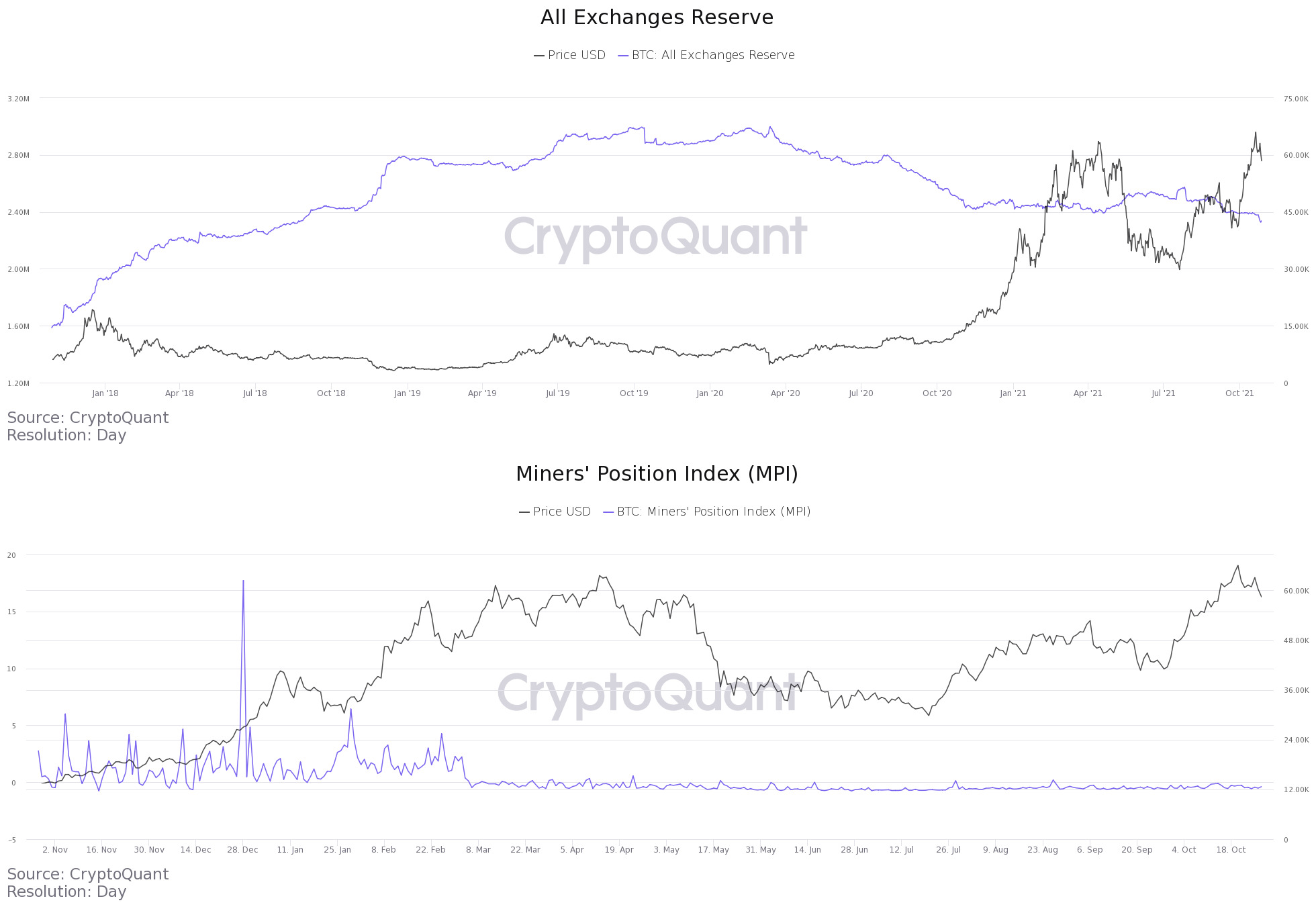 «The amount of Bitcoins [owned by miners] is on similar levels that were in May when the price was under $40k,» noted a CryptoQuant analyst as BTC attempted to rebound after falling below $60,000 on Oct. 26, adding:

«You can see easily how early we are still before the final bulls run.»

Bitcoin’s price correction from around $67,000 to $58,100 appeared after October’s 60% rally. However, BTC/USD formed a parallel descending channel range (purpled), raising possibilities that the structure is a Bull Flag.

Bulls Flags are bullish continuation patterns that send the price in the direction of their previous trend following a consolidation period to the downside. In doing so, the technical indicator eyes their upside targets at length equal to the size of the previous uptrend, also known as Flagpole, once the price breaks above the Flag’s upper trendline with higher volumes.

Related: Is Bitcoin price mimicking the 2017 bull run? Find out on The Market Report with ETF expert Eric Balchunas

The Bitcoin flagpole is approximately $15,000 long. That means the cryptocurrency could technically rise by as much as $15,000 from the point of the breakout. The Fibonacci levels in the chart above may work as floors to support rebound towards or above $70,000.

However, not all traders are convinced the current setup is bullish in the short term.

«Some would say this is a bull flag, and that’s possible. But the volume characteristics point to a move lower from here most likely imo,» commented pseudonymous crypto trader Alex.

Fellow trader Pentoshi added that a break below the recent lows of $58,000 would be bad news for the bulls. He said:

«BTC off 58k to the dollar What if this is a big bull flag, and that we are in a bull market where bull flags break up? Now in theory price shouldn’t go back to those lows or Bitcoin is in trouble 64k down to 29k 29k back up w/ only 2 misses on the macro during that time.»