The weekend failed to ignite bullish momentum from crypto investors and both Bitcoin (BTC) and Ether (ETH) turned down on Oct. 31. The bulls will now try to achieve the third successive weekly close and the first-ever monthly close above the psychological $60,000 level.

$63,000 is another level of interest for traders because the stock-to-flow creator PlanB, projected this level as the “worst-case scenario” for October. In the recent past, PlanB’s worst-case theory was proven to be correct in August and September. 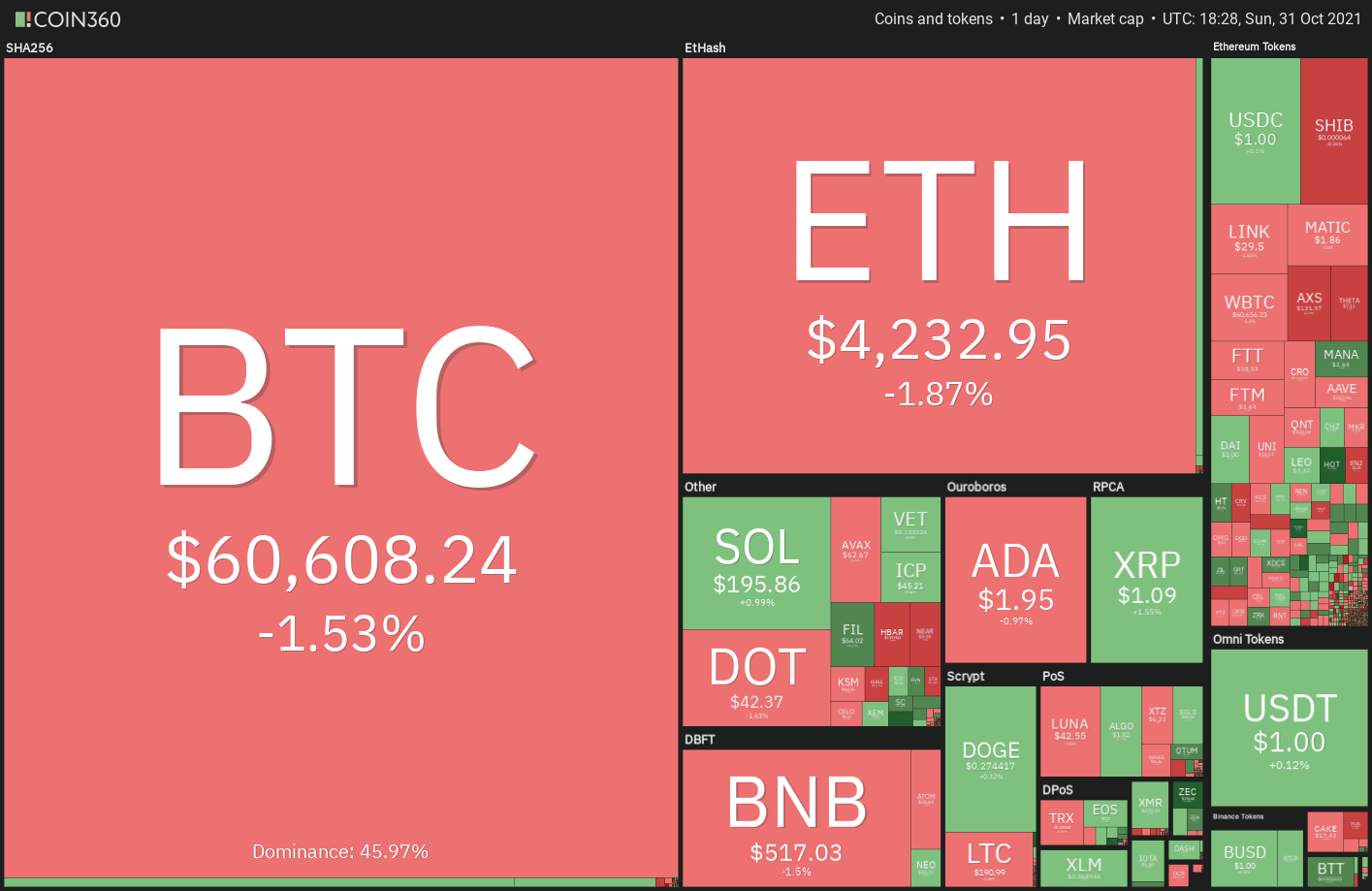 The journey for the hodlers was not easy as there were several gut-wrenching corrections along the way and each time a handful of analysts called for the end of Bitcoin. However, in hindsight, all these dips turned out to be good buying opportunities.

Today marks the 13th birthday of the Bitcoin white paper released on Oct. 31, 2008, paving the way for possibly the biggest financial disruption.

Let’s analyze the charts of the top-5 cryptocurrencies that could attract traders’ attention in the next few days.

Bitcoin has formed a flag pattern but the bulls have not been able to push the price above it. The failure to break the overhead resistance could have prompted selling by short-term traders, which has pulled the price to the 20-day exponential moving average ($59,679). 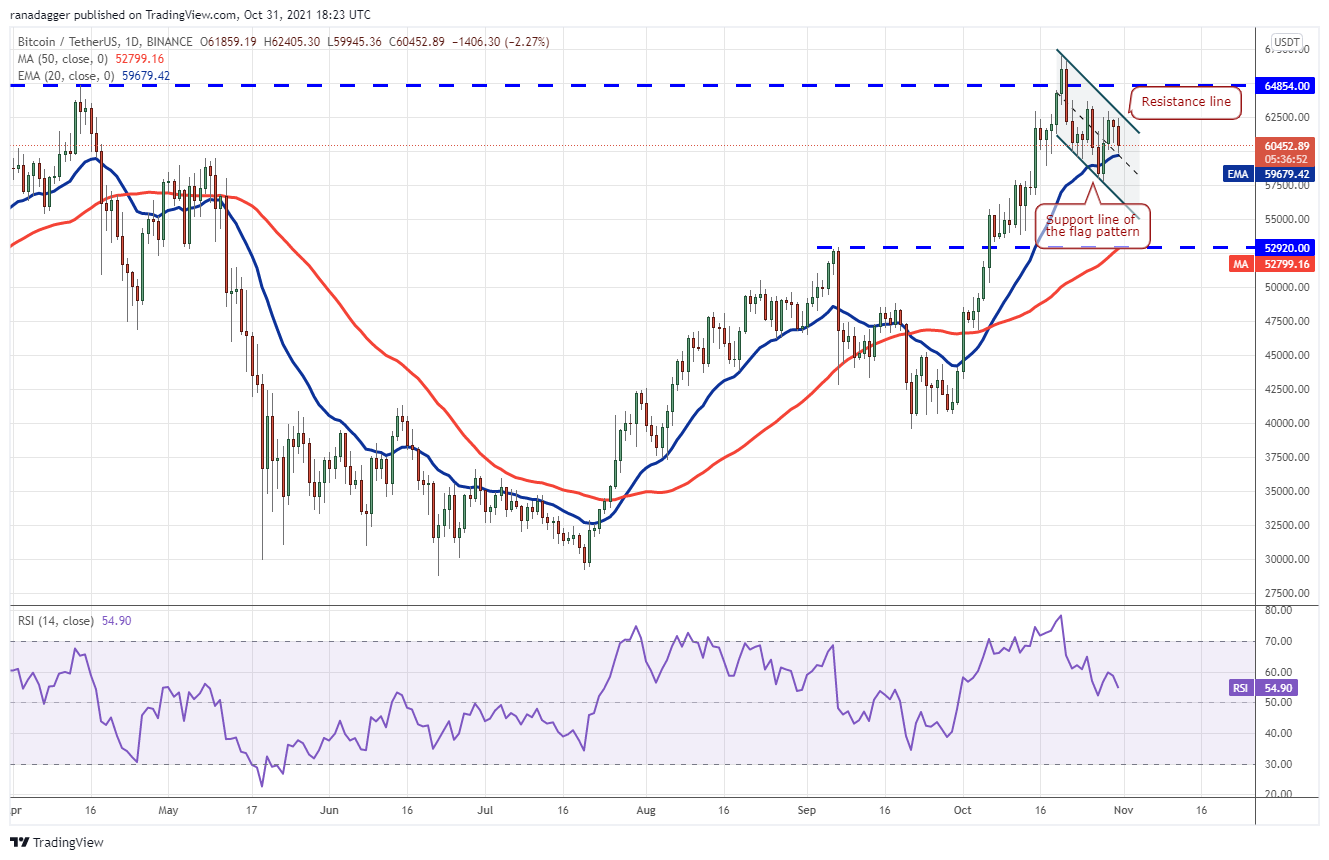 If bears pull the price below the 20-day EMA, the BTC/USDT pair could drop to the support line of the pattern. This is an important support for the bulls to defend because a break below it will invalidate the setup. The pair could then sink to the next support at $52,920.

If the price rebounds off the 20-day EMA, the bulls will make one more attempt to thrust the pair above the flag. If they succeed, the pair could retest the all-time high at $67,000 and then rally toward the pattern target at $89,476.12. 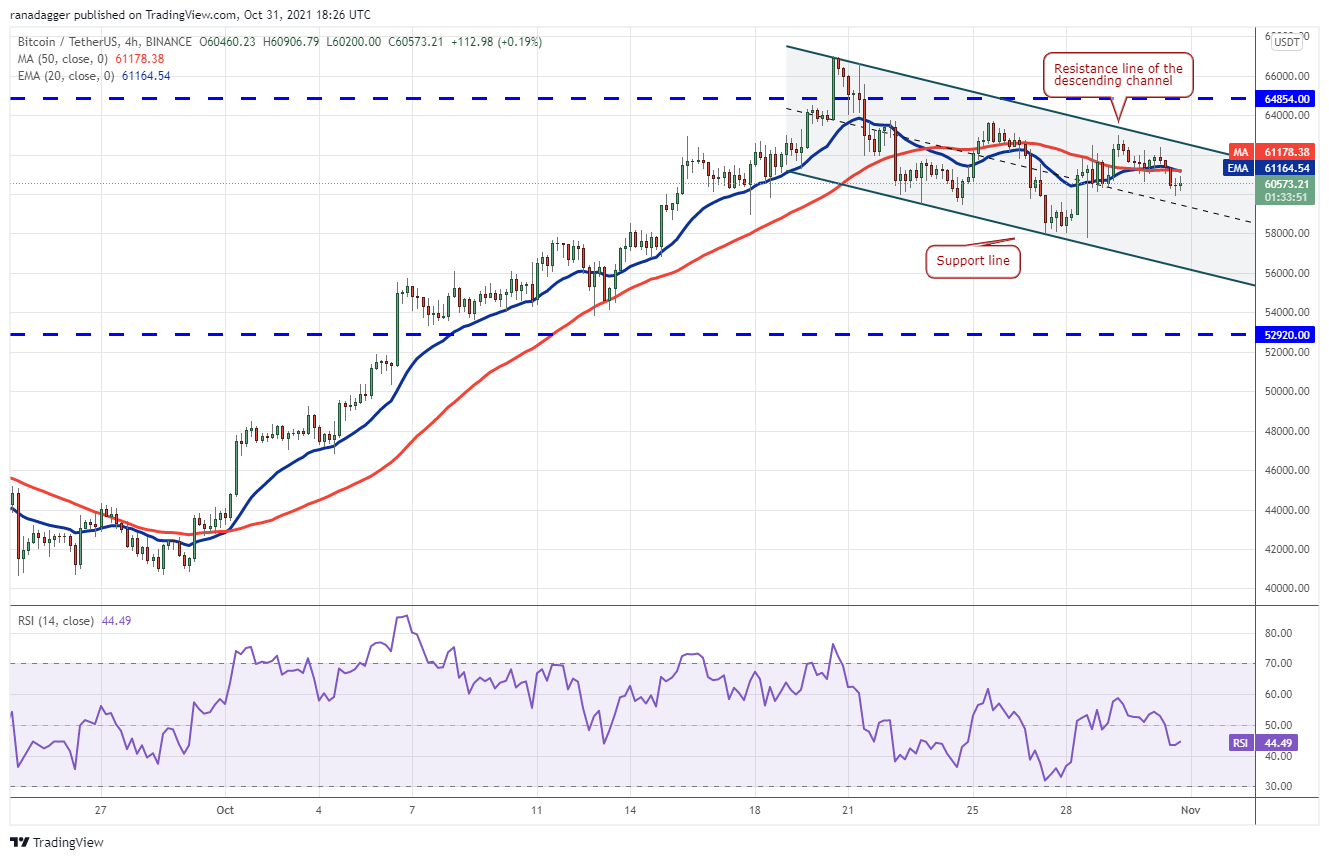 The 4-hour chart shows that bears are aggressively defending the resistance line. The pair has dipped below the moving averages and a break below $60,000 could result in a decline to the support line.

This level is expected to attract strong buying from the bulls. A bounce off the support line could keep the pair inside the descending channel. The bulls will have to push and sustain the price above the resistance line to indicate the possible end of the corrective phase.

Ether broke above the all-time high at $4,375 on Oct. 29 but the bulls could not continue the up-move. The bears pulled the price back below the breakout level on Oct. 30, indicating that sellers are active up at higher levels. 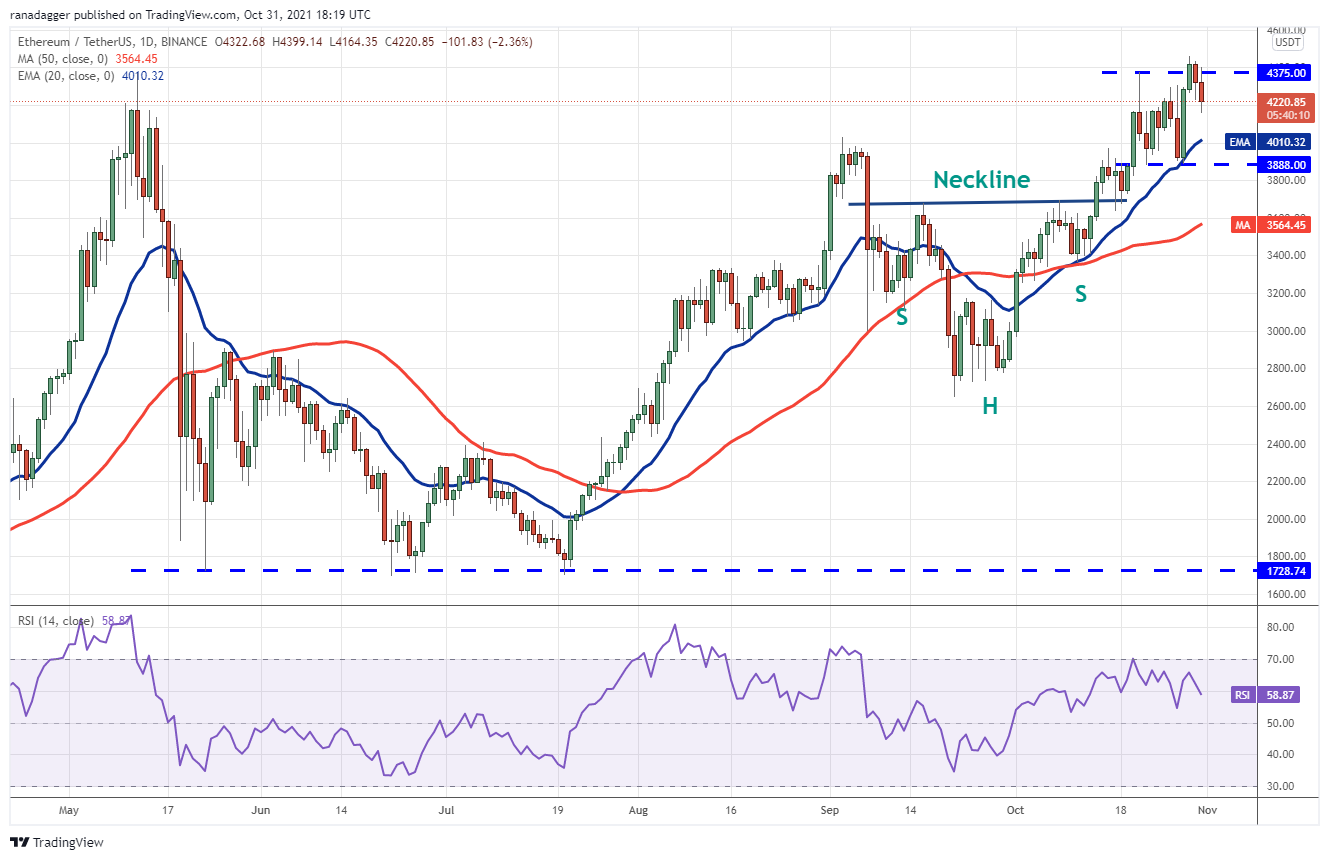 The ETH/USDT pair could drop to the 20-day EMA ($4,010), which is an important support for the bulls to defend. If the price bounces off this support, the bulls will try to thrust the pair above $4,460.47.

If that happens, the pair could resume its journey toward the psychological mark at $5,000. On the contrary, a break below the 20-day EMA could result in a decline to $3,888. If the price rebounds off this level, the pair may remain range-bound for a few days. 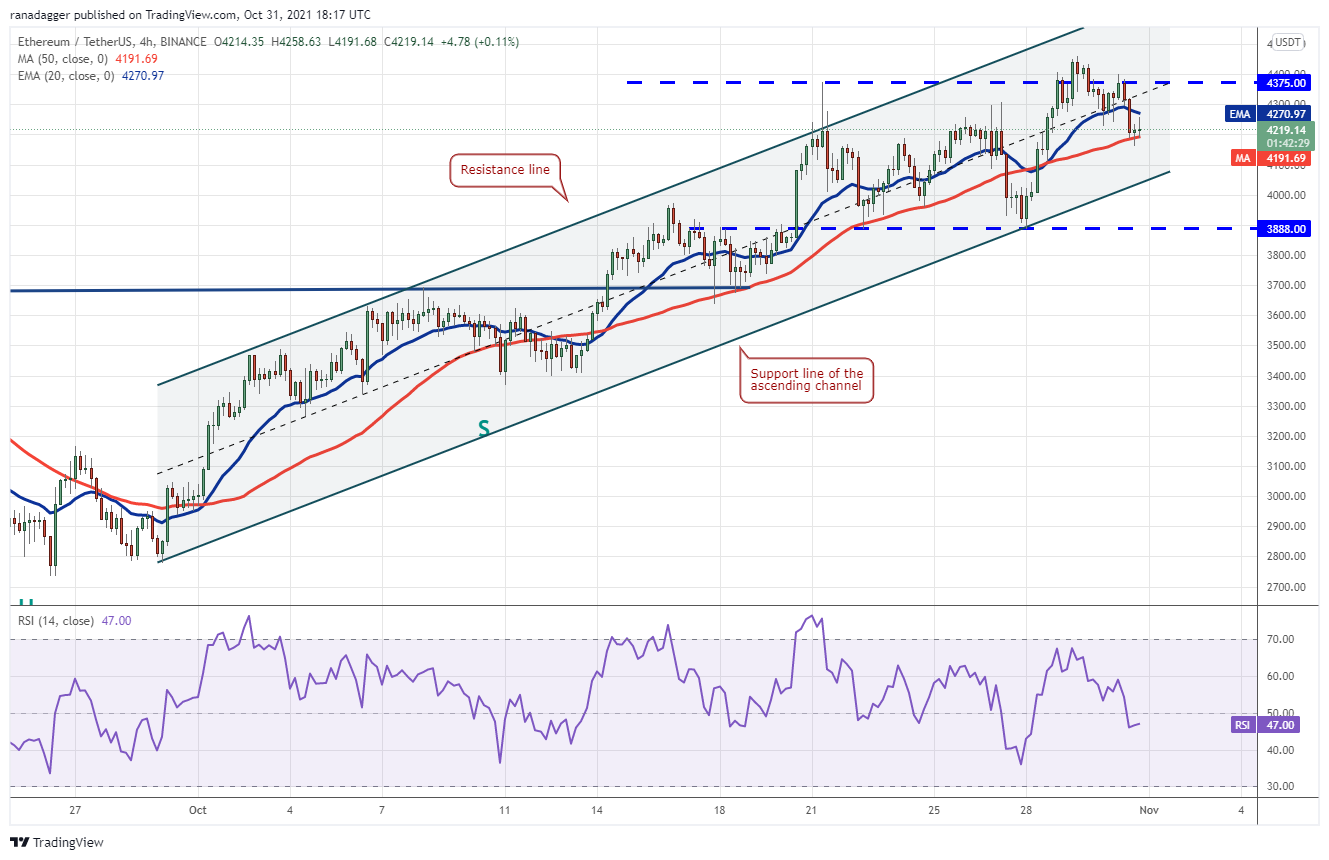 The pair has been trading inside an ascending channel for the past few days. If the price rebounds off the 50-SMA, the bulls will attempt to push the pair above $4,460.47. The pair could then rally to the resistance line of the channel. A break and close above the channel could accelerate the uptrend.

Alternatively, if the price dips below the 50-SMA, a drop to the support line of the channel is likely. A bounce off this level could keep the uptrend intact but a break below the channel will be the first sign that the bulls may be losing their grip.

Binance Coin (BNB) broke above the overhead resistance at $518.90 on Oct. 29 but the bulls could not build upon this advantage. This suggests a lack of demand at higher levels. 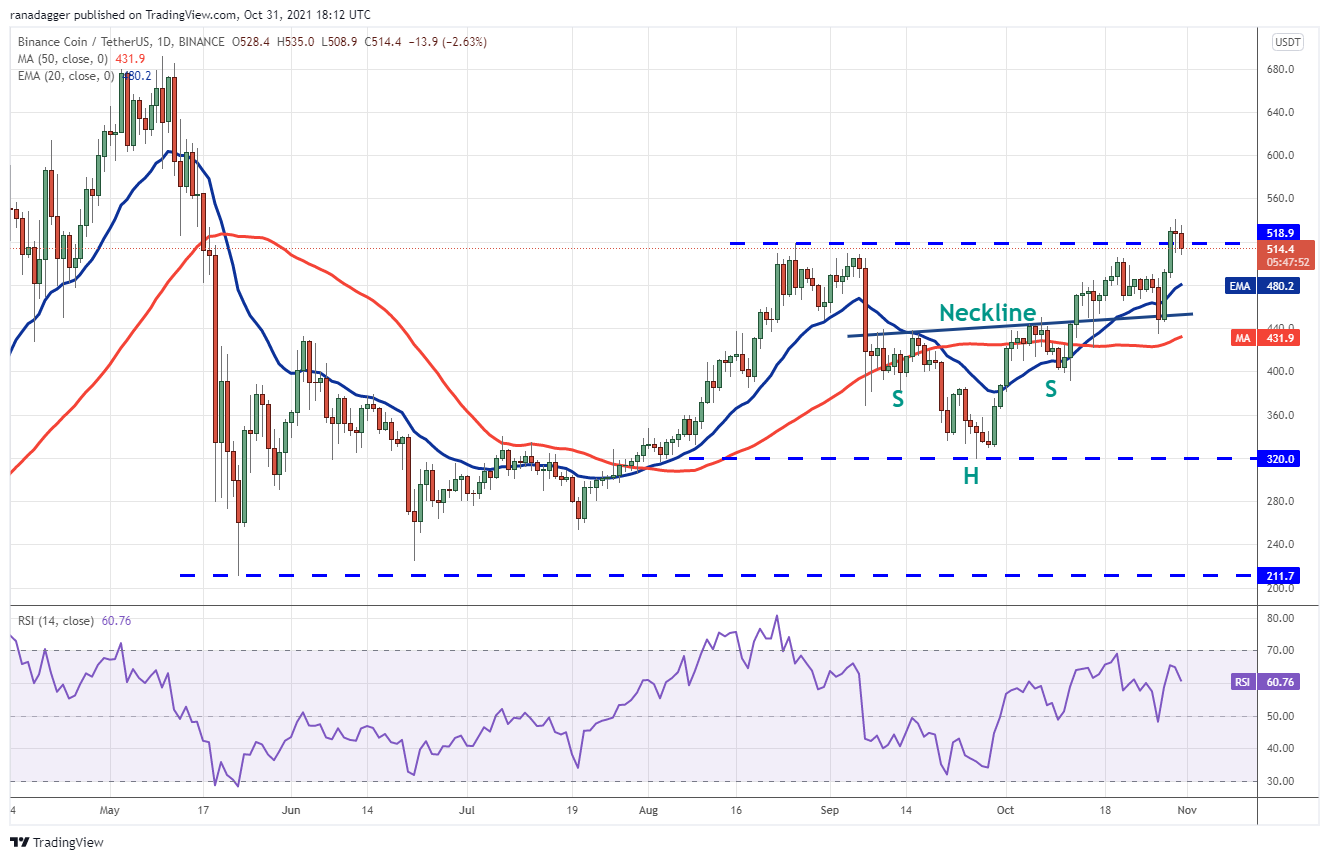 The bears have pulled the price back below $518.90. If the BNB/USDT pair sustains below this level, the next stop could be the psychological support at $500 and then the 20-day EMA ($480). This is an important support for the bulls to defend.

If the price rebounds off the 20-day EMA, it will suggest that sentiment remains positive and traders are buying on dips. The bulls will then again try to resume the uptrend by driving the price above the overhead zone between $518.90 and $540.50.

Conversely, if the price slips below the 20-day EMA, the correction could deepen and the pair could drop to the 50-day SMA ($431). 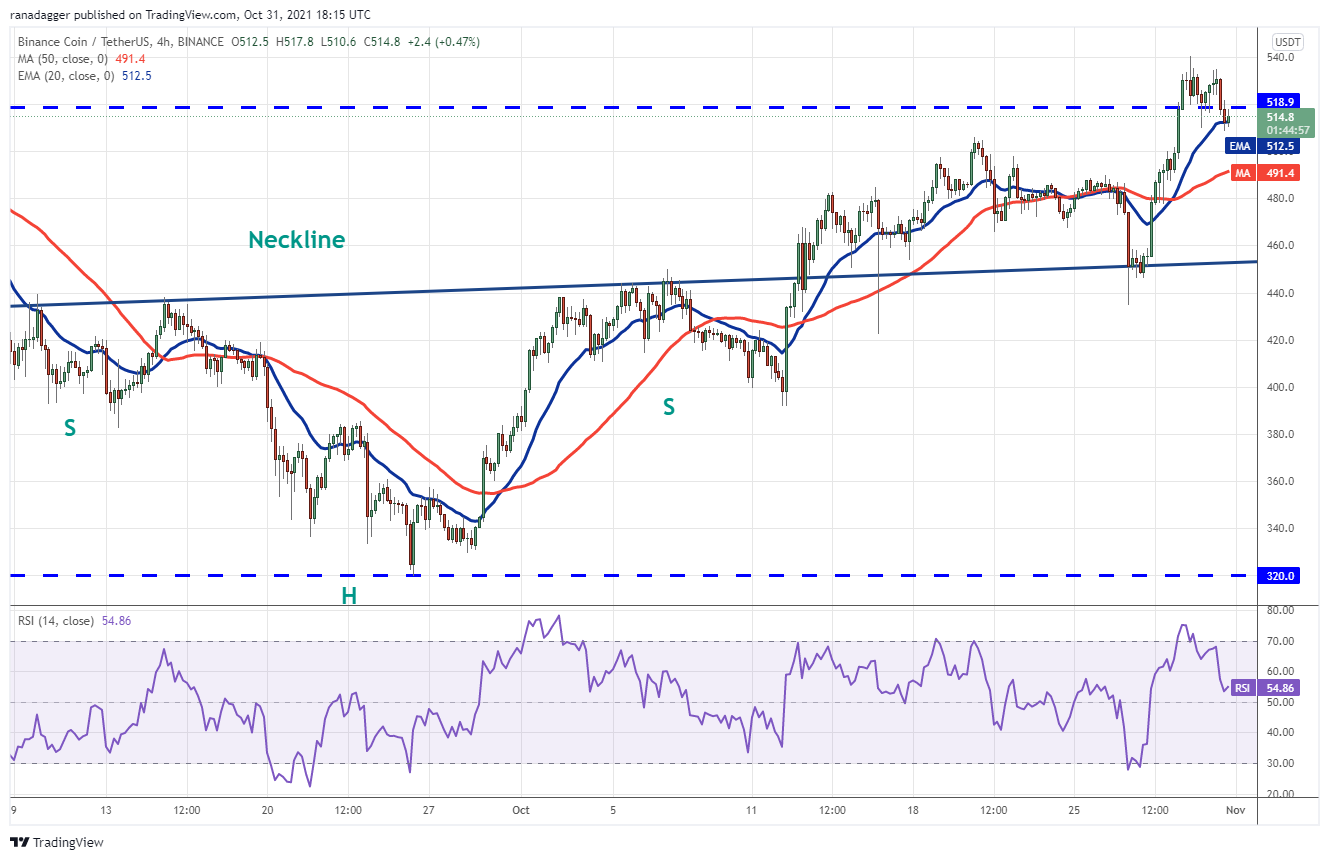 The price has dipped back to the 20-EMA, which is likely to act as a strong support. If the pair rebounds off this level, the bulls will attempt to resume the uptrend and push the price to the pattern target at $554 and then to $600.

If the price breaks below the 20-EMA, it will suggest that the bullish momentum may be weakening in the short term. The pair could then drop to the 50-SMA and next to the neckline of the inverse head and shoulders pattern. A break below this level will indicate a possible change in trend.

Related: What is the worst nightmare that could happen to crypto? Experts answer

Polygon (MATIC) skyrocketed and closed above the overhead resistance zone at $1.71 to $1.79 on Oct. 28, which indicated the start of a new uptrend. 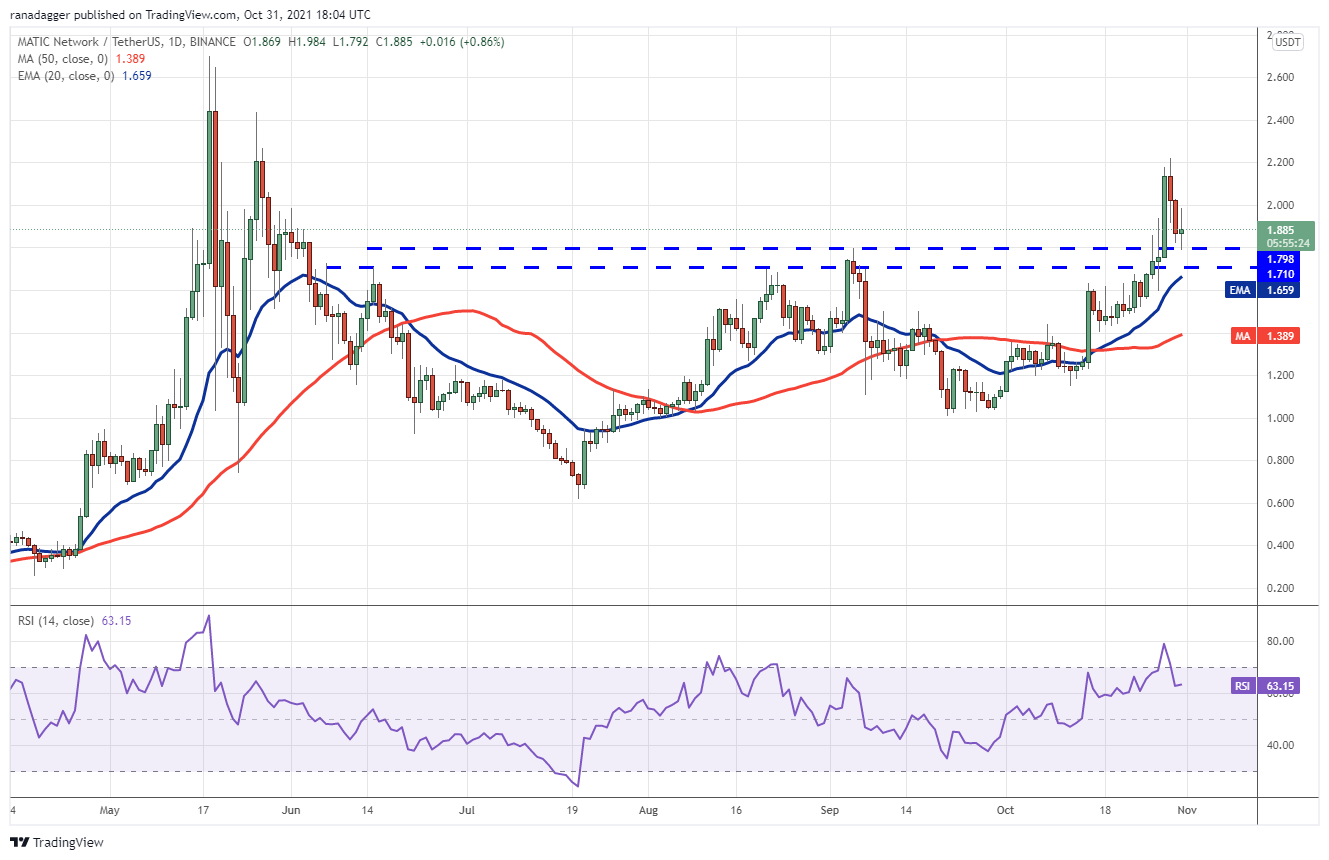 Usually, after the price rises above a significant resistance, it turns down and retests the breakout level. The bulls will now try to flip the $1.79 to $1.71 zone into support and use it as a launchpad to resume the uptrend.

This positive view will invalidate if bears pull and sustain the price below the 20-day EMA. Such a move will indicate that the recent break above $1.79 may have been a bull trap. 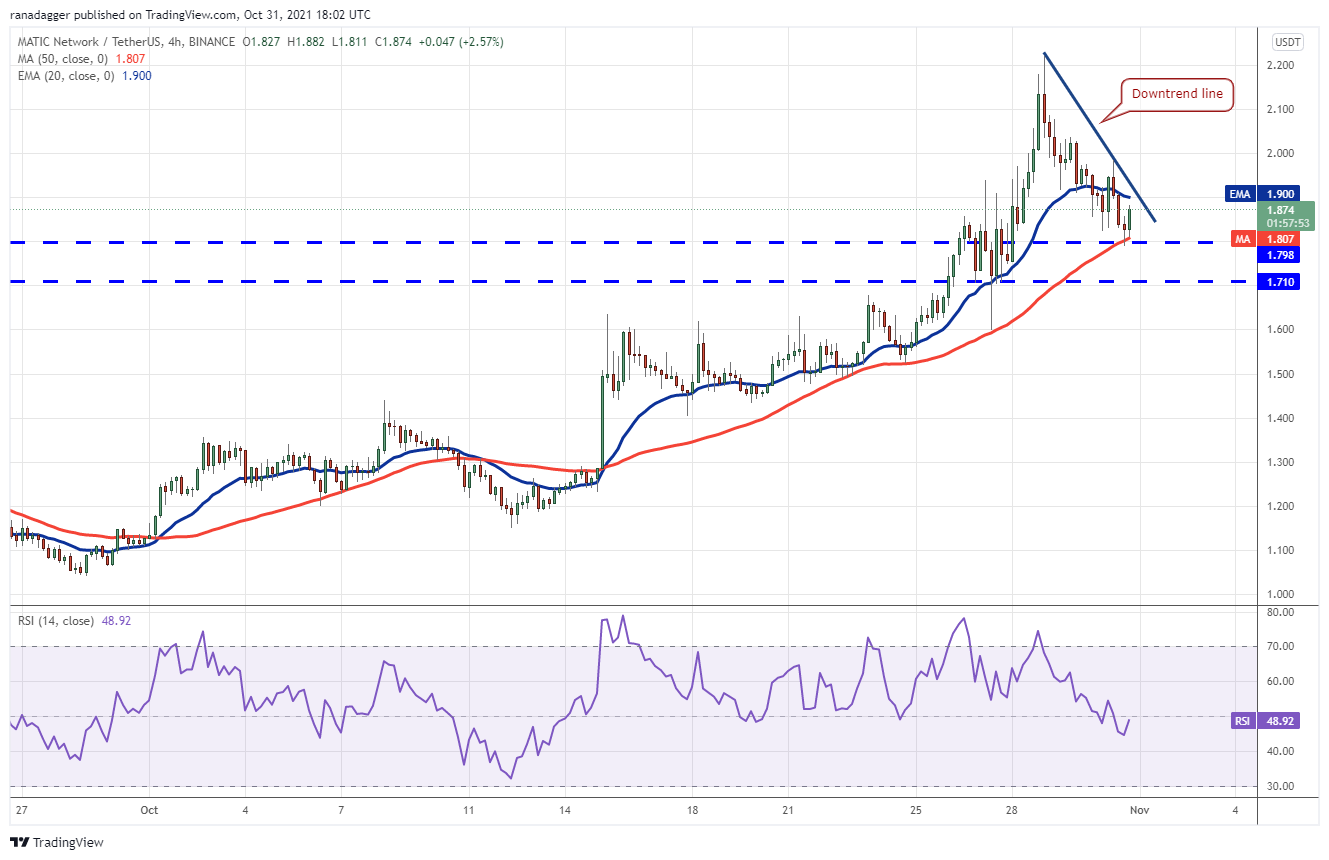 The 4-hour chart shows the price has dipped to the 50-SMA, which is likely to act as a strong support. If bulls drive the price above the downtrend line, it will suggest that the selling pressure may be reducing.

Alternatively, if the price breaks below the 50-SMA, the pair could drop to $1.71. This level is again likely to act as a strong support but if it cracks, the selling could intensify. The pair could thereafter drop to $1.50.

Fantom (FTM) broke out to a new all-time high on Oct. 28 but the bulls could not sustain the breakout. The long wick on the day’s candlestick shows that traders booked profits at higher levels. 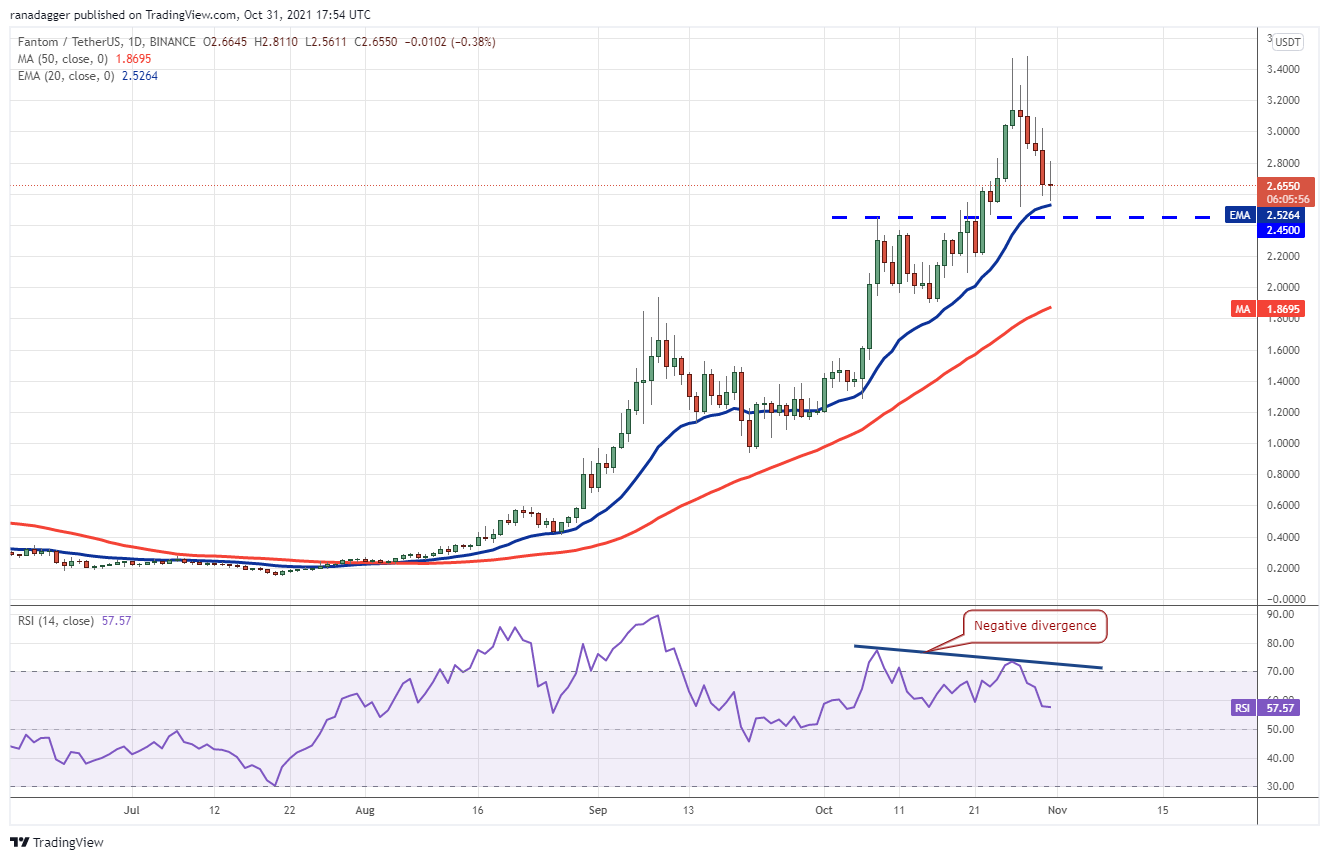 In an uptrend, bulls generally buy the dips to the 20-day EMA ($2.52). If the price rebounds off the current level, it will suggest that sentiment remains bullish and traders are buying on dips. The bulls will then attempt to push the price above the overhead resistance at $3.48.

If they succeed, the FTM/USDT pair could resume its uptrend with the next target objective at $4.10, followed by a move to the psychological level at $5.

Contrary to this assumption, a break below the 20-day EMA will signal that traders continue to dump their positions. The pair could then drop to the 50-day SMA ($1.86). The negative divergence on the RSI suggests that the bullish momentum could be weakening. 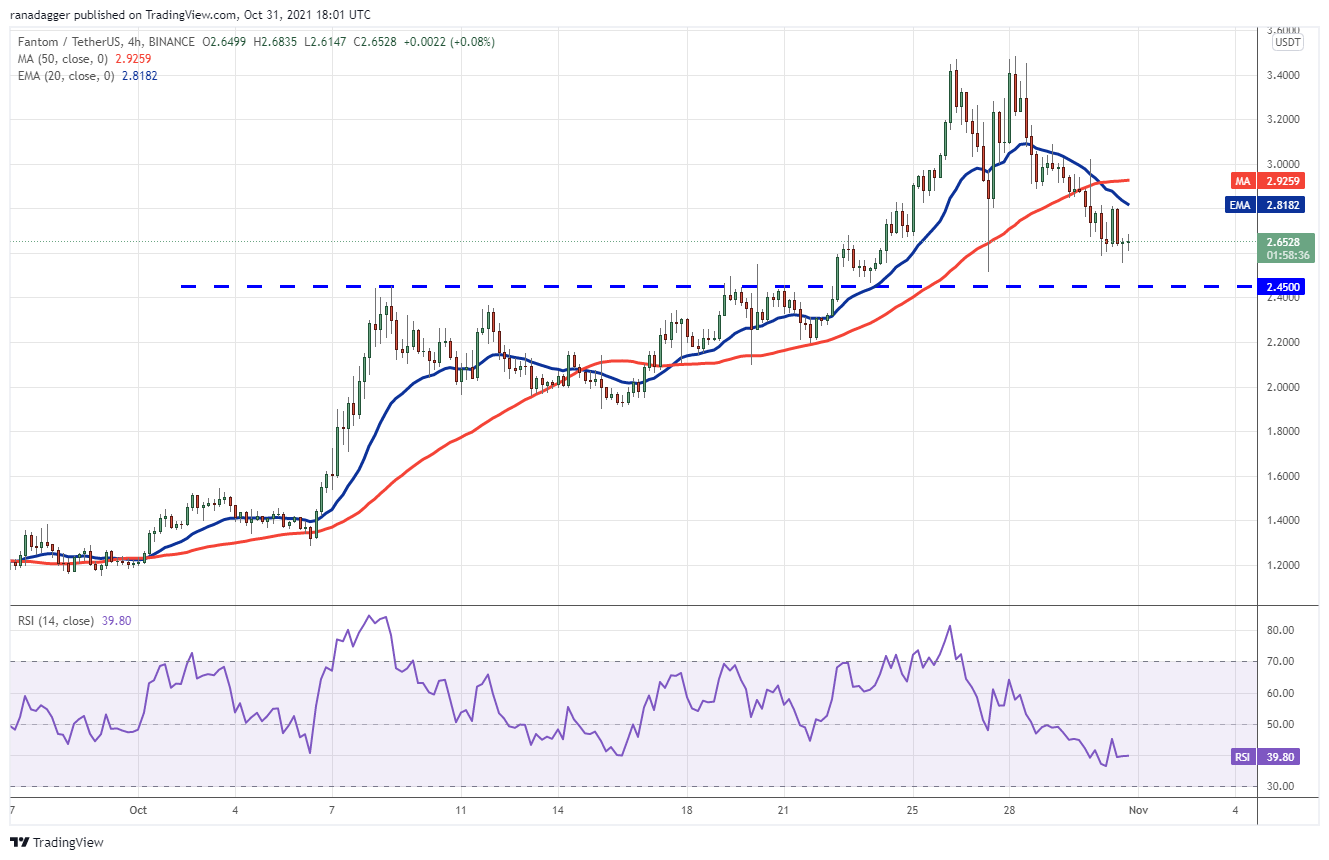 The moving averages have completed a bearish crossover on the 4-hour chart and the RSI has dipped into the negative zone, indicating that bears are at an advantage. The first support on the downside is the earlier breakout level at $2.45.

A strong rebound off this level will suggest that bulls are attempting to flip this level into support. If that happens, the pair could again attempt to rise to $3 and later to $3.48. This positive view will invalidate if bears pull the price below $2.45.

Inside the blockchain developer’s mind: What is a testnet?