Bitcoin (BTC) continues to languish below the psychological level at $50,000 in the first few days of the New Year, indicating a lack of aggressive buying by traders. Former BTCC CEO Bobby Lee said the exodus of the Chinese traders who had until Dec. 31 to exit Chinese exchanges may have kept prices lower into the year-end. 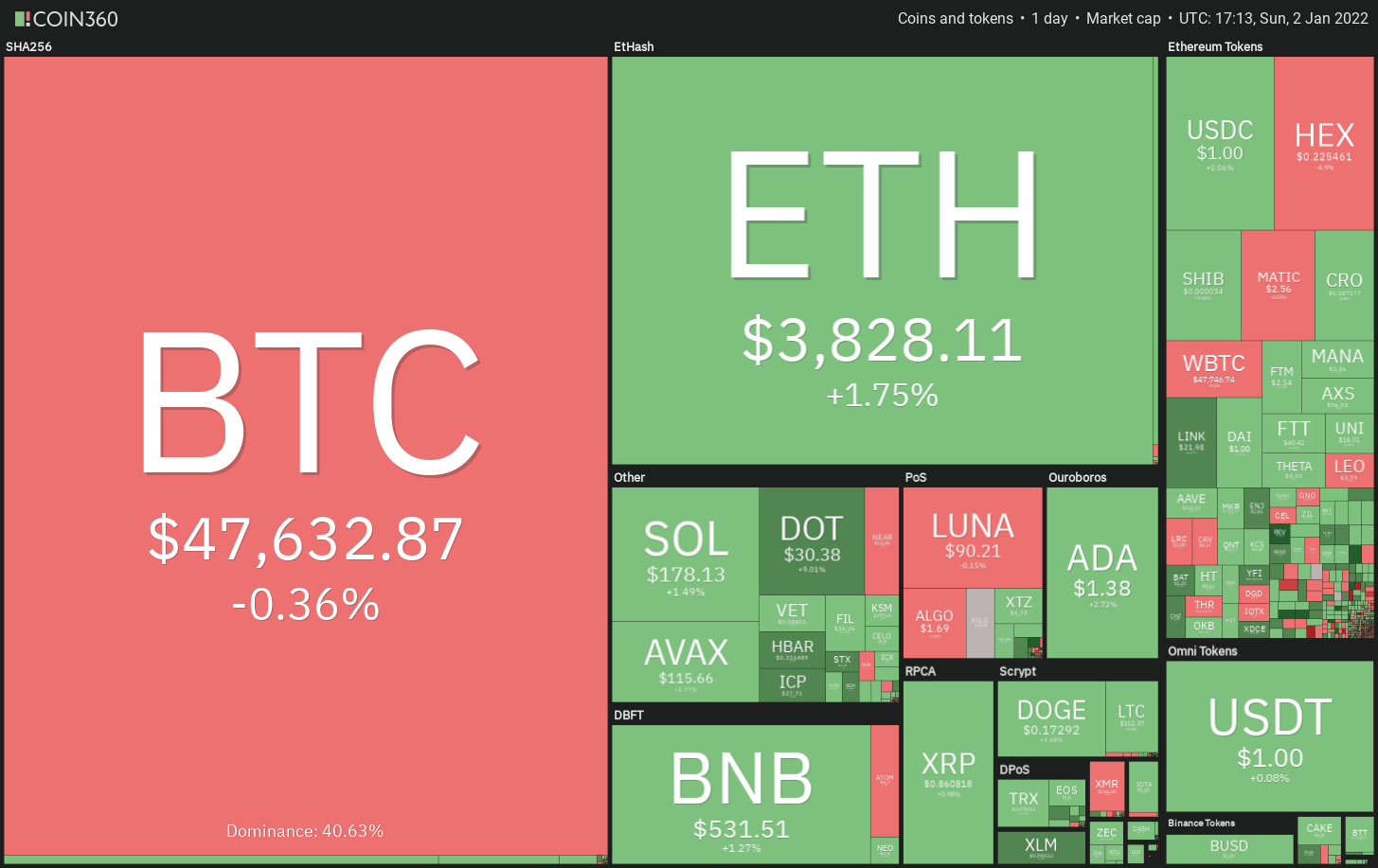 The increased crypto adoption by institutional investors in 2021 is another long-term positive. According to CoinShares, net inflows into crypto funds in 2021 were more than $9.3 billion. A majority of over two-thirds of the crypto inflows were into Bitcoin.

Could Bitcoin start a new up-move in January pulling select altcoins higher? Let’s study the charts of the top-5 cryptocurrencies that may remain positive in the short term.

Bitcoin has been trading between the 20-day exponential moving average ($48,720) and the strong support at $45,456 for the past few days. This suggests that buying dries up at higher levels. 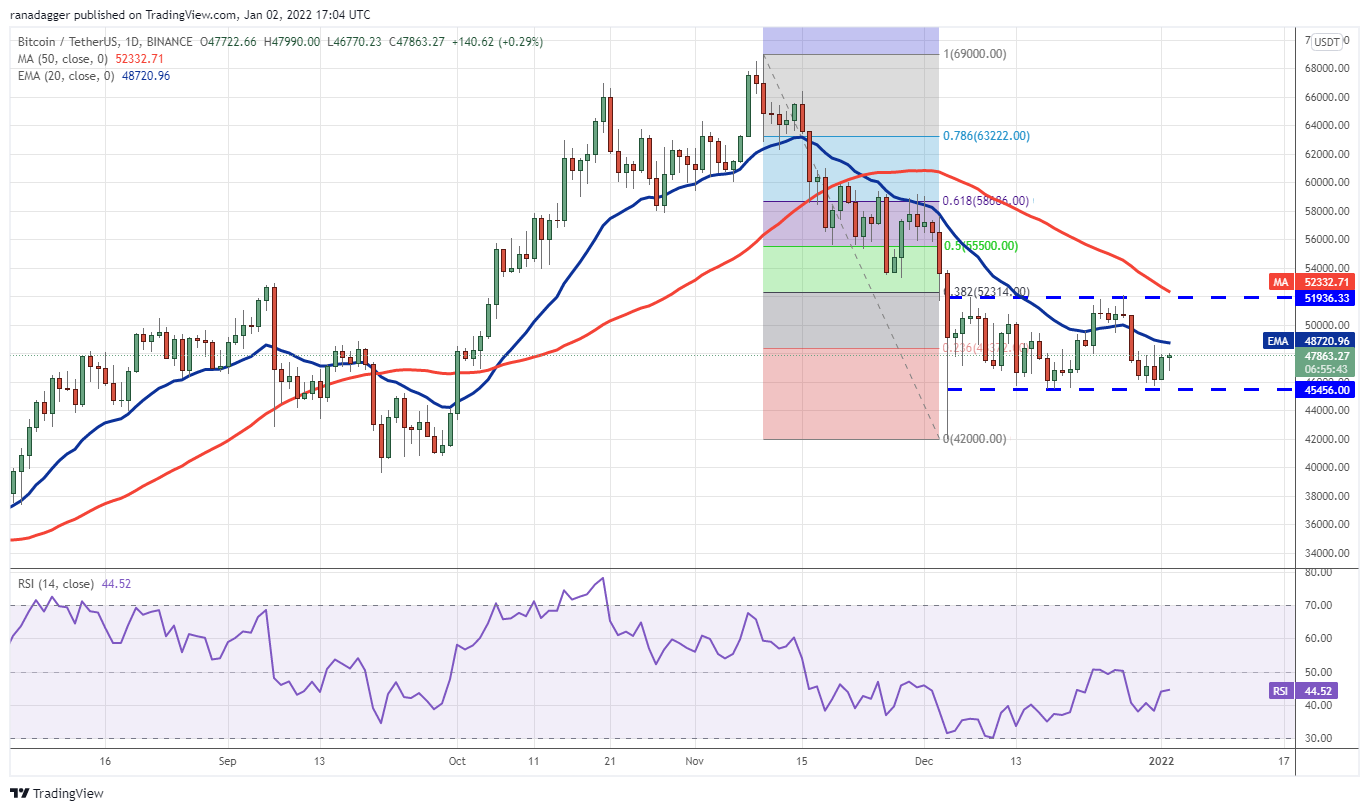 Both moving averages are turning down and the relative strength index (RSI) is in the negative zone, indicating that bears have the upper hand. If the price turns down from the 20-day EMA, the bears will try to sink the price below $45,456. If they manage to do that, the next leg of the downtrend to $42,000 and then to $40,000 could begin.

Contrary to this assumption, if the price breaks above the 20-day EMA, the BTC/USDT pair could rise to the 50-day simple moving average ($52,332). A break and close above this level could signal the start of a new up-move that could reach the 61.8% Fibonacci retracement level at $58,686. 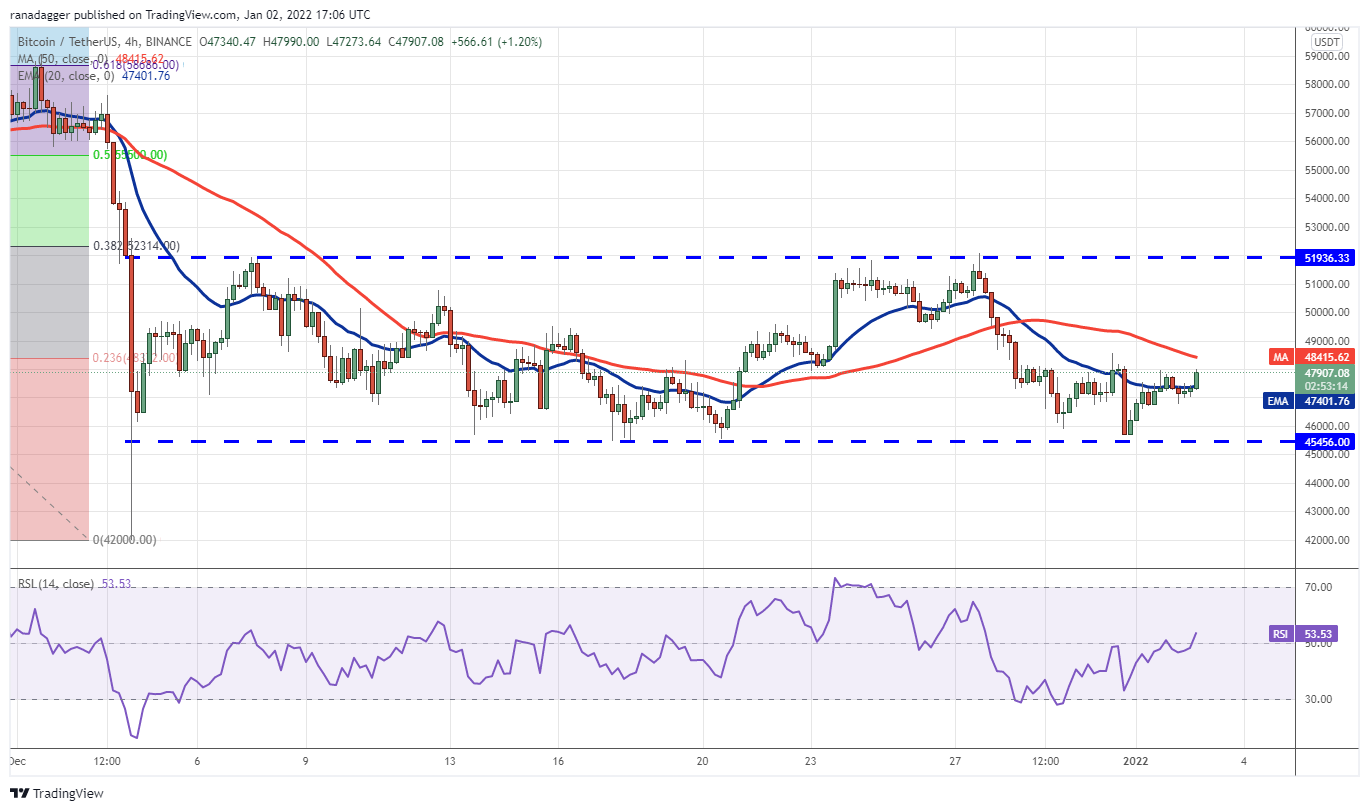 Conversely, if the price turns down from the 50-SMA, the bears will make one more attempt to pull the pair below $45,456. If they succeed, the pair could resume the downtrend with the next target objective at $38,975.67.

Terra’s LUNA token is attempting to resume its uptrend but the bears have other plans, drawing a line near $93.81. 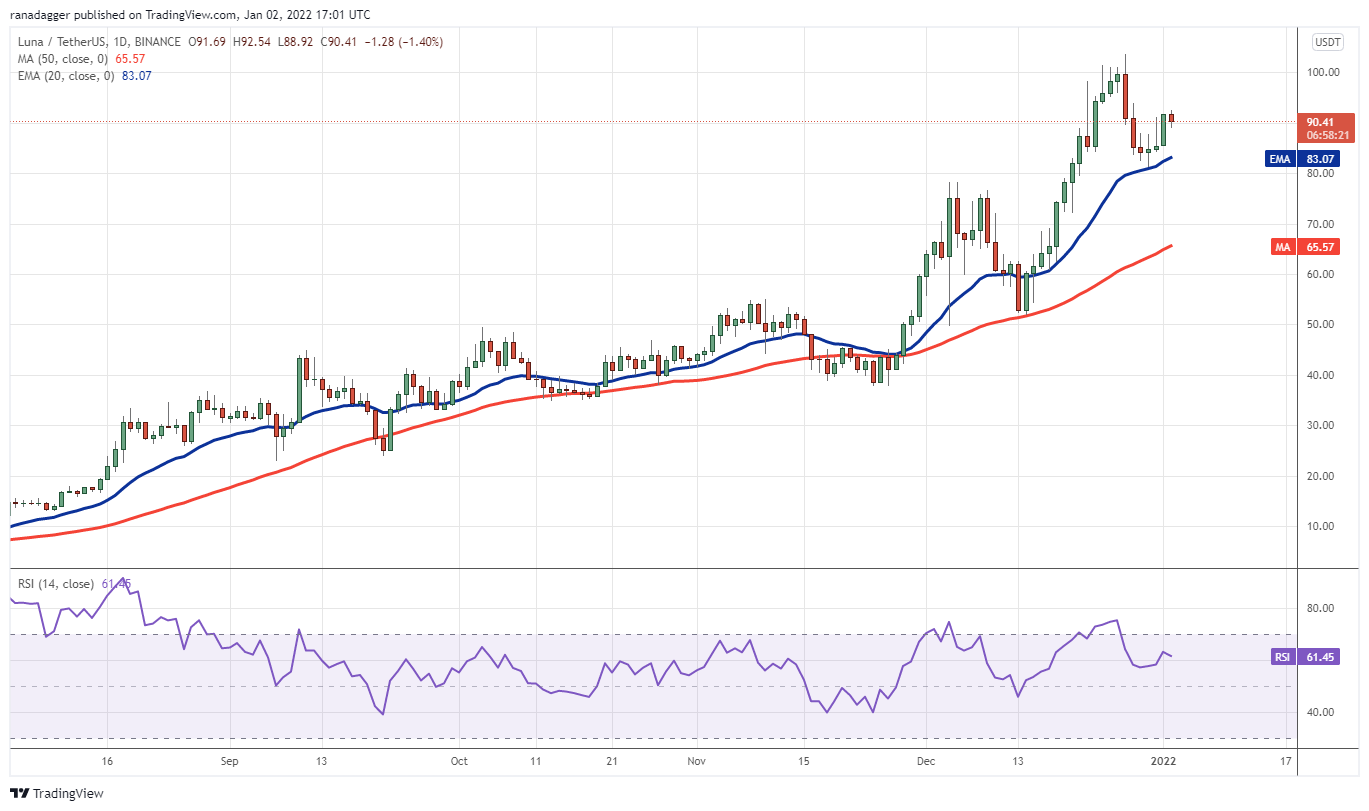 The upsloping moving averages and the RSI in the positive territory suggest a slight edge to the buyers. If the price once again rebounds off the 20-day EMA ($82), it will indicate that bulls continue to accumulate on dips.

The LUNA/USDT pair will then try to break above $93.81 and challenge the all-time high at $103.60. A break and close above this resistance could start the next leg of the uptrend to $135.26.

Conversely, if the price turns down and breaks below the 20-day EMA, it will signal a change in the short-term trend. The pair could then drop to $65.15. 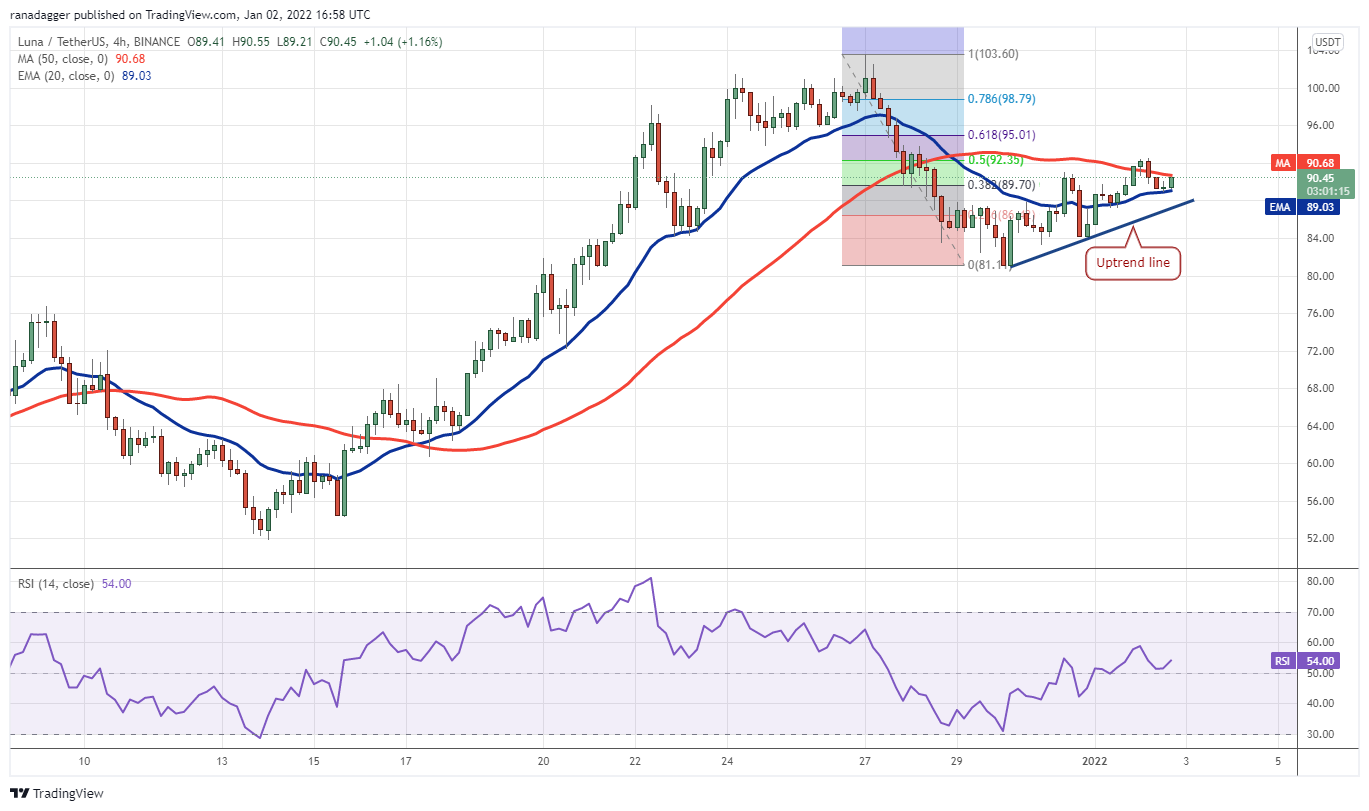 If they do that, the pair could drop to $84 and then to $81.11. A break and close below this support could signal that bears are back in the game.

On the contrary, if the price rebounds off the current level or the uptrend line, the buyers will try to drive the pair above $95.01 and retest the overhead resistance at $103.60.

Fantom (FTM) has turned down from the overhead resistance at $2.67, which suggests that bears are defending this level with vigor. 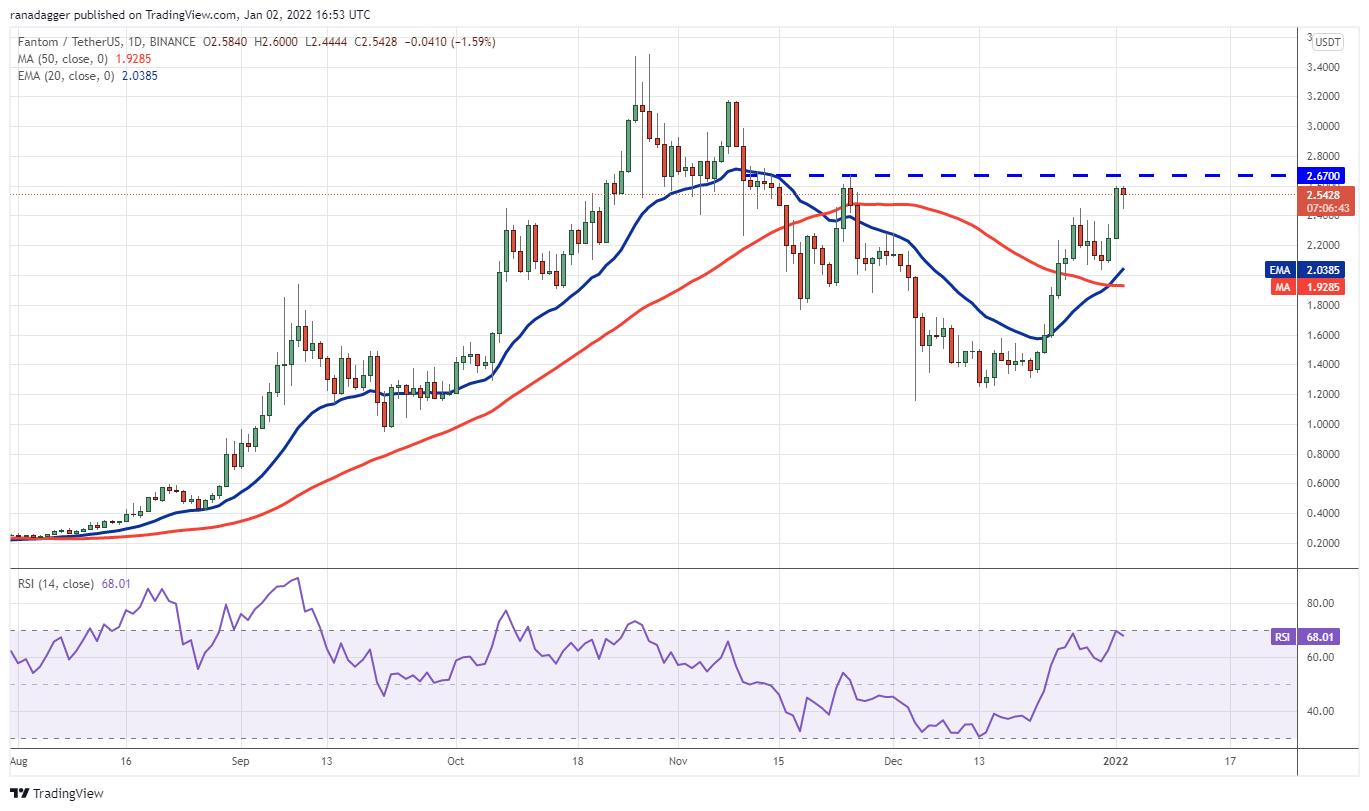 The FTM/USDT pair could drop to the 20-day EMA which could act as a strong support. A sharp rebound off this support will suggest that buyers are accumulating on dips.

The rising 20-day EMA ($2.03) and the RSI above 68 suggest that the path of least resistance is to the upside.

A break and close above $2.67 will suggest that bulls are back in the game. The pair could then start its northward march toward $3.17 and then to $3.48. The bears will have to pull and sustain the price below $2 to invalidate the bullish sentiment. 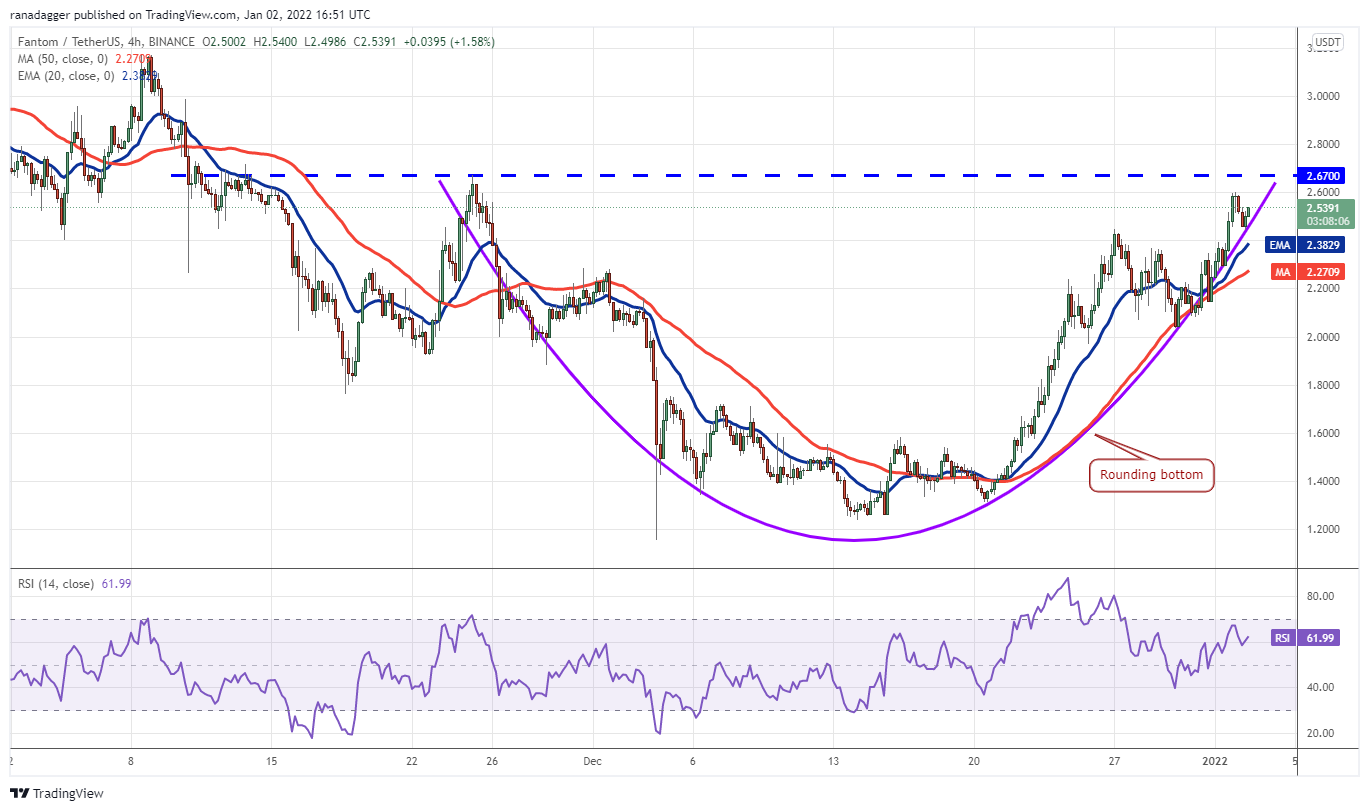 The 4-hour chart shows a rounding bottom formation, which will complete on a break and close above the overhead resistance at $2.67. If the price rebounds off the 20-EMA, the bulls will again try to overcome the barrier at $2.67. If that happens, the up-move could begin.

Conversely, if the price breaks below the 20-EMA, it will suggest that the short-term bullish momentum could be weakening. The pair could then drop to the 50-SMA and later to the strong support at $2.

Related: Three reasons why PlanB’s stock-to-flow model is not reliable

Cosmos (ATOM) broke and closed above the overhead resistance at $34 on Jan. 1. The moving averages have completed a bullish crossover, indicating that bulls have the upper hand. 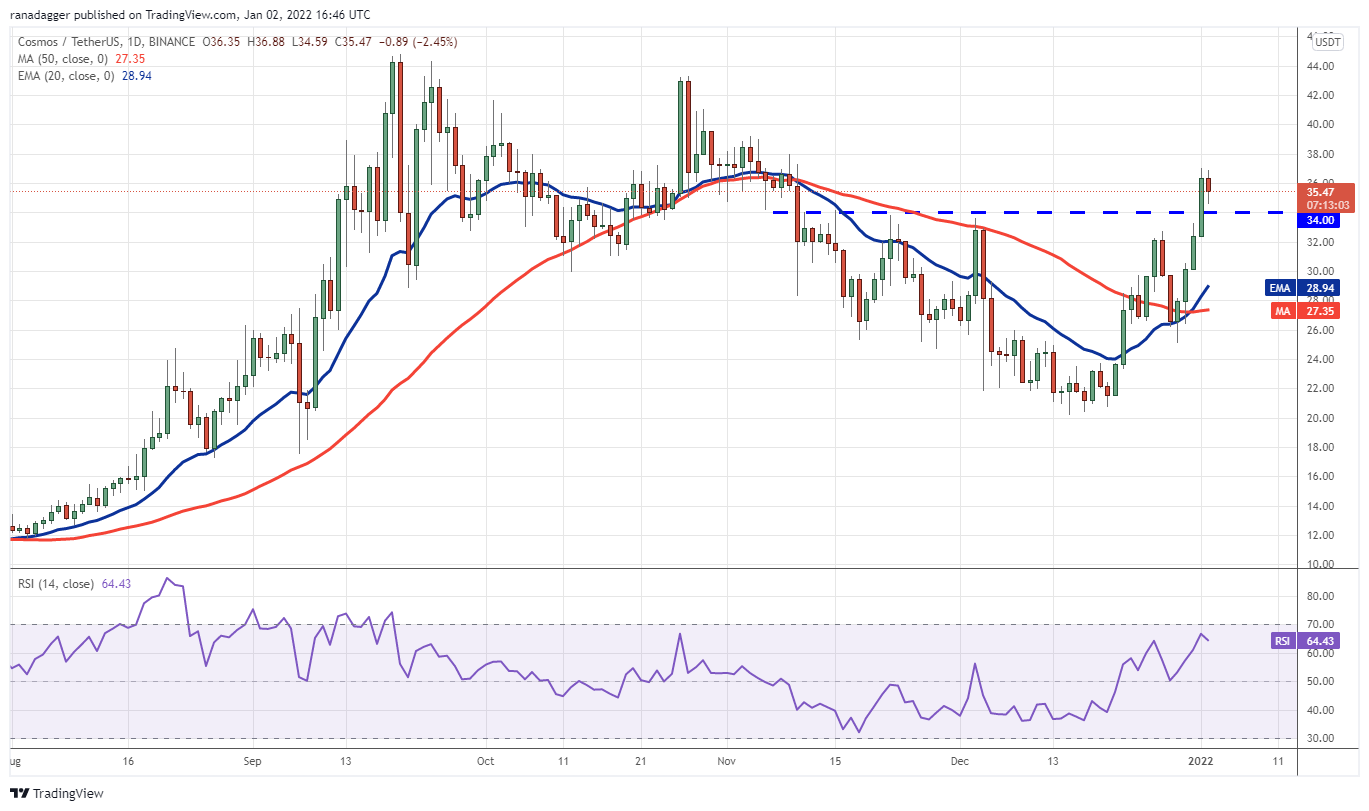 If the price sustains above $34, the bullish momentum could pick up further and the ATOM/USDT pair could rise to $38 and later to $43.28. The moving averages have completed a bullish crossover and the RSI is in the positive zone, indicating that bulls are in control.

Contrary to this assumption, if the price breaks and closes below $34, it will suggest that bears are attempting to trap the aggressive bulls. The pair could then drop to the 20-day EMA ($28).

If the price rebounds off this level, the bulls will make one more attempt to clear the overhead hurdle but if the pair breaks below the moving averages, the decline could extend to $25. 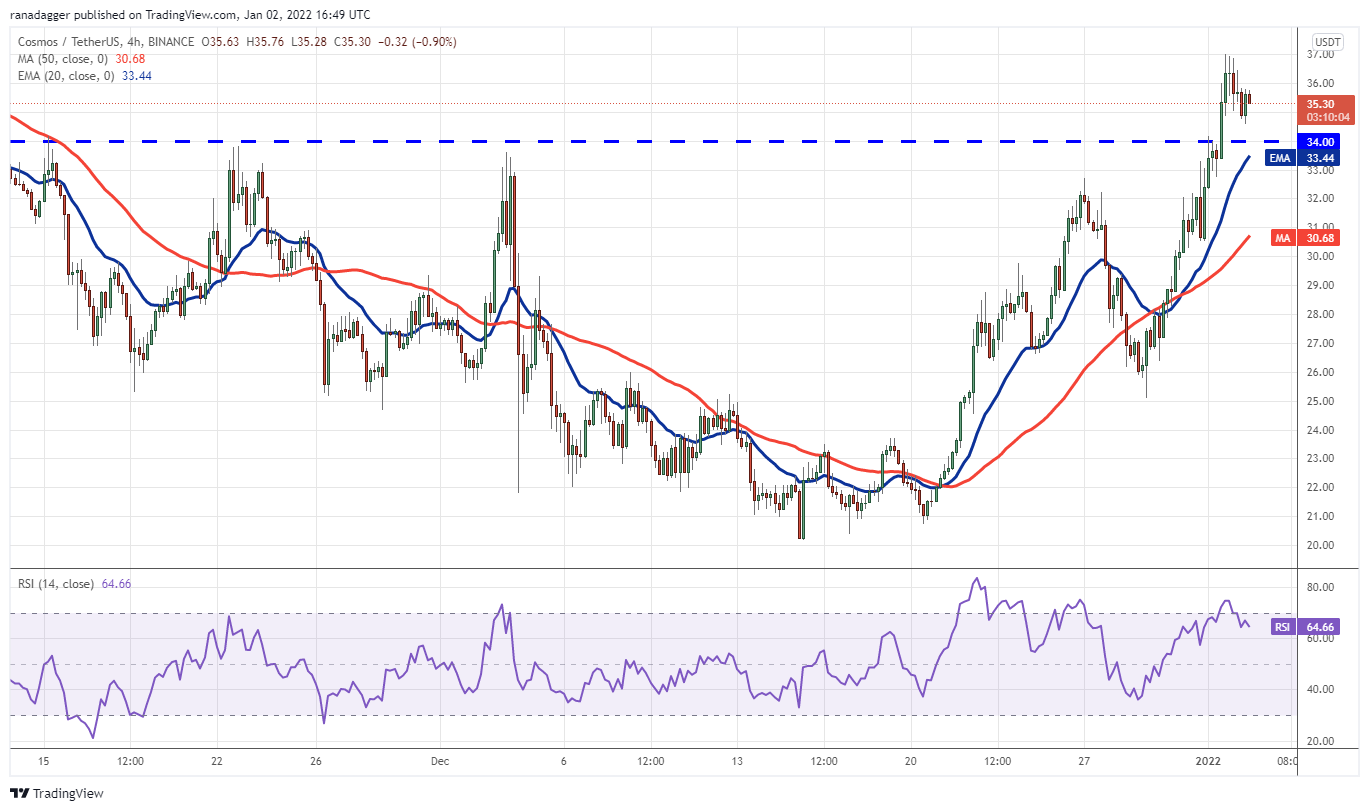 Both moving averages are sloping up and the RSI is in the positive territory, suggesting that bulls have the upper hand. If the price rebounds off the 20-EMA, it will signal that sentiment remains positive and traders are buying on dips.

The up-move could resume on a break and close above $37. Conversely, if bears pull the price below the 20-EMA, it may lead to profit-booking from short-term traders. That may pull the price down to the 50-SMA.

Harmony (ONE) has reached the downtrend line where the bears are likely to mount a stiff resistance. If the price turns down from the current level, the altcoin could dip to the 20-day EMA ($0.24). 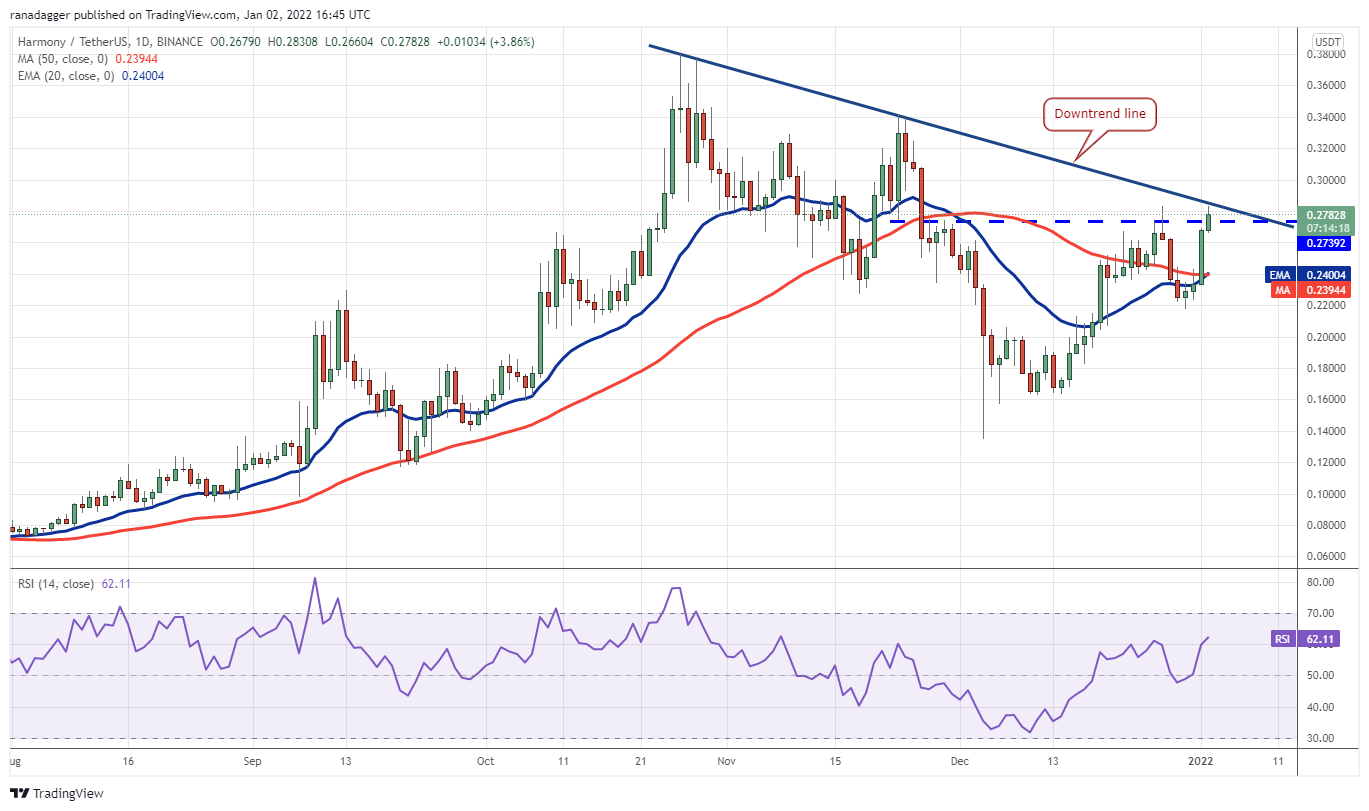 If the price rebounds off the 20-day EMA, it will suggest that the sentiment remains bullish and traders are accumulating on dips. The bulls will then again attempt to push the price above the downtrend line.

If they succeed, it will suggest the start of a new up-move. The first target on the upside is $0.34 and a break above it could result in a retest at $0.38. This positive view will invalidate if the price turns down and breaks below $0.21. 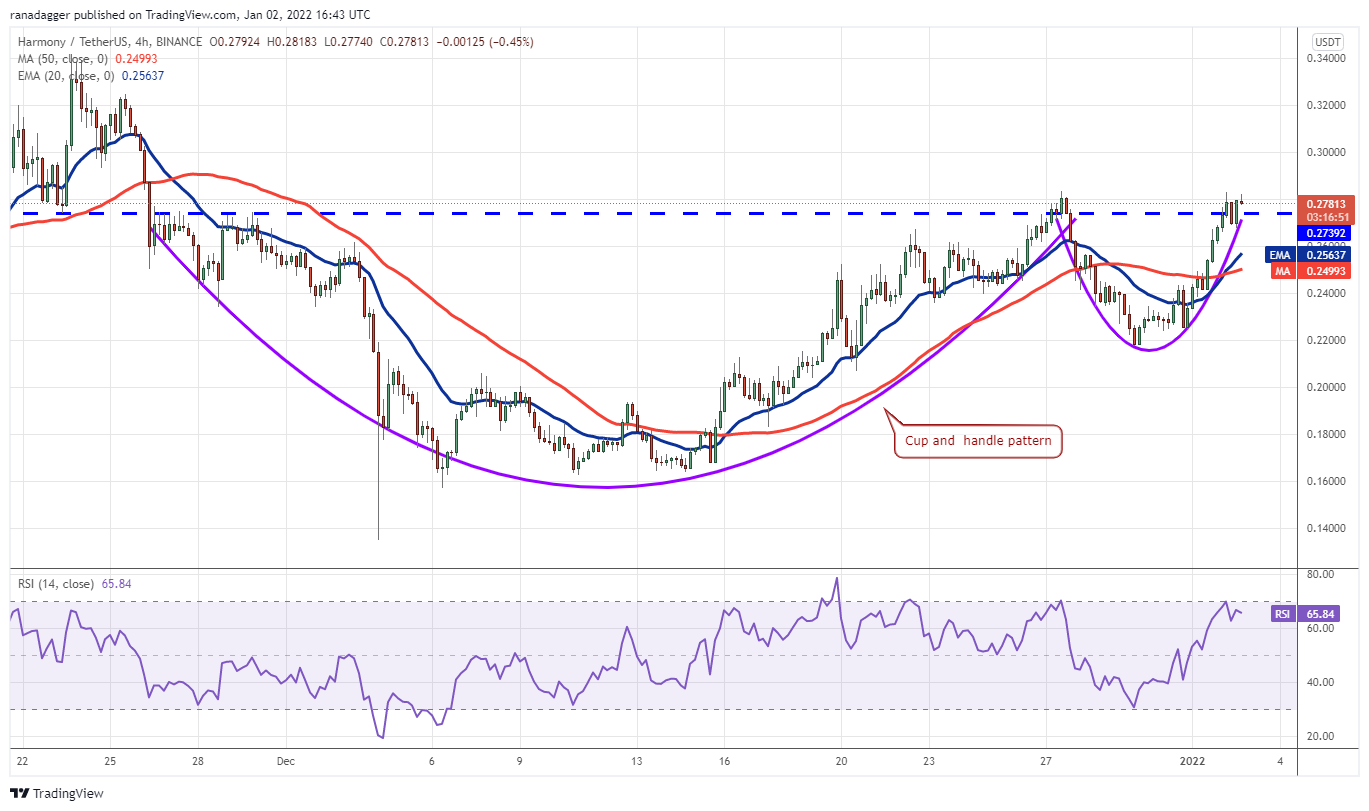 The 4-hour chart shows the formation of a cup-and-handle pattern, which will complete on a break and close above $0.29. This reversal setup has a pattern target at $0.38. It is unlikely to be a straight dash to the target objective because bears are likely to mount a strong resistance at $0.34.

Conversely, if the price turns down from the current level, it could drop to the moving averages. If this support cracks, the ONE/USDT pair could decline to $0.21. A bounce off this support could keep the pair range-bound between $0.21 and $0.27 for some time.

What’s ahead for crypto and blockchain in 2022? Experts Answer, Part 2

What’s ahead for crypto and blockchain in 2022? Experts Answer, Part 2