Network data provider NetBlocks reported Wednesday that Kazakhstan was “in the midst of a nation-scale internet blackout after a day of mobile internet disruptions and partial restrictions.” According to the data, the normalized network connectivity in Kazakhstan fell to 2% on Jan. 5. 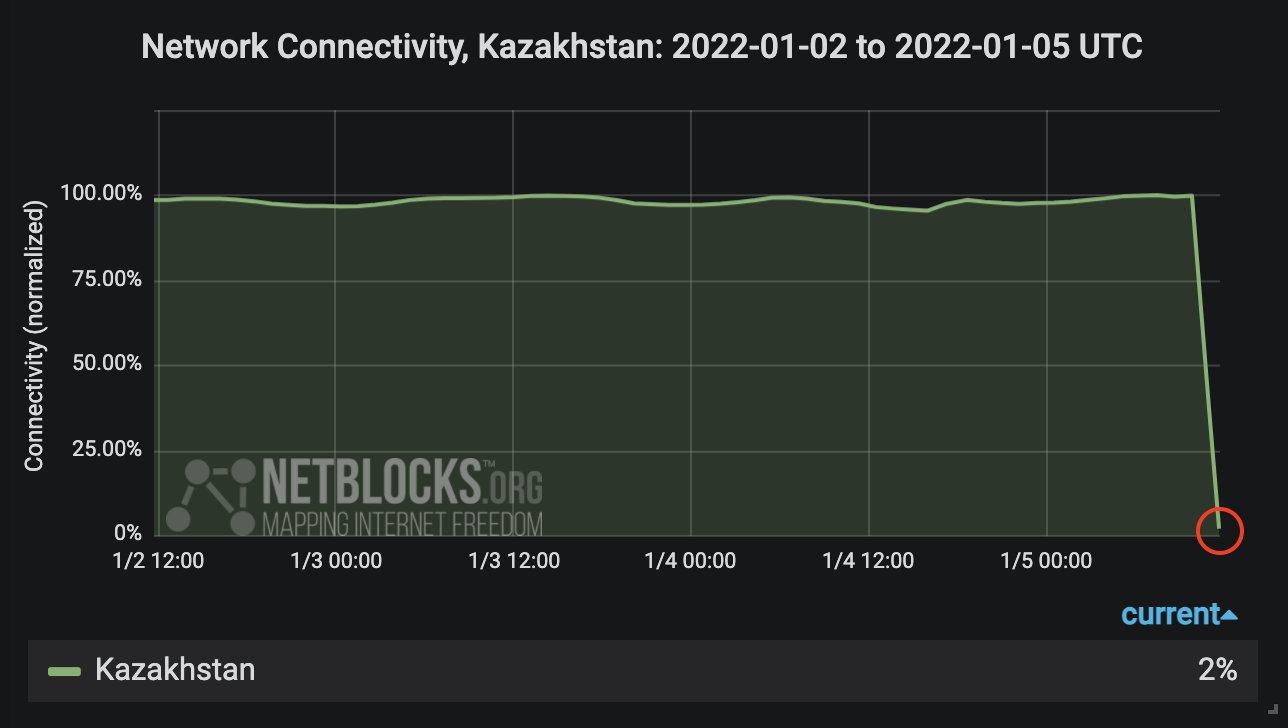 Kazakhtelecom, the largest telecom company in Kazakhstan, has shut down the internet across the nation, according to some reports. Cellular networks have reportedly also been disabled in some cities in Almaty.

Kazakhstan’s ongoing internet outage comes after the Kazakhstan government resigned amid protests that were sparked over a sharp rise in fuel prices. President Kassym-Jomart Tokayev sacked Kazakhstan’s government early on Wednesday and declared a state of emergency in Almaty and the surrounding province.

According to some analysts, the protests are also a response to the lack of democracy in the country. “Young, internet savvy Kazakhs, especially in Almaty, likely want similar freedoms as Ukrainians, Georgians, Moldovans, Kyrgyz, and Armenians, who have also vented their frustrations over the years with authoritarian regimes,” Tim Ash, emerging market strategist at BlueBay Asset Management said.

The protests have taken a violent turn, with reports of sustained gunfire between protestors and state security organs including the police and the national guard.

The latest internet outages could affect the global Bitcoin hash rate. As previously reported by Cointelegraph, Kazakhstan accounted for 18% of the total global BTC mining hash rate distribution as of October 2021, second only to the United States.

Many Chinese Bitcoin mining companies and miners were increasingly relocating their services in Kazakhstan after the Chinese government announced a renewed ban on the crypto industry in September 2021.

El Salvador: How it started vs. how it’s going with the Bitcoin Law in 2021

The worst influencer and celebrity NFT cash grabs of 2021

El Salvador: How it started vs. how it’s going with the Bitcoin Law in 2021