Despite major internet blackouts amid anti-government protests in Kazakhstan, some Bitcoin (BTC) miners operating in the country are not planning to leave the country just yet.

“It is unlikely that our mining machines will be evacuated to North America,” a spokesperson for BIT Mining reportedly said, adding that the firm will be closely monitoring the situation.

The representative also noted that Kazakhstan is not BIT Mining main area of business, as it has a number of “mid-to-high-end mining machines” deployed in North America. “It is unlikely that the machines will be withdrawn from Kazakhstan to North America, and further actions will be disclosed,” the report said.

According to some sources, Kazakhstan-based miners have managed to keep their unites online despite the internet outages.

“Some Kazakhstan miners told us that the internet was temporarily restored on January 7th. In addition, the 4G network of Chinese phones is also intermittently effective. The industry expects that the country may return to normal next Monday,” Chinese blockchain journalist Colin Wu reported Friday.

Sources also said that some miners’ operations were unaffected because they are mostly located in remote areas while protests were concentrated in the urban area of Almaty. “It has not been heard that any miners have been robbed, but they cannot mine because of the network interruption,” Wu reported.

According to the latest data from network stability data provider NetBlocks, the internet in Kazakhstan had been shut down for 36 hours by Friday morning, with connectivity levels standing at 5%.

⚠️ Update: It’s now Friday morning in #Kazakhstan where internet has been shut down for some 36 hours, placing public safety at risk and leaving friends and family cut off.

Connectivity levels continue to flatline at just 5% of ordinary levels.

But despite the ongoing nation-wide blackouts, Kazakhstan unrest appears to have had little to no effect on the global Bitcoin hash, according to some sources. Data from major BTC blockchain explorer Blockchain.com suggests that the total BTC hash rate has not dropped at all since the beginning of 2022. 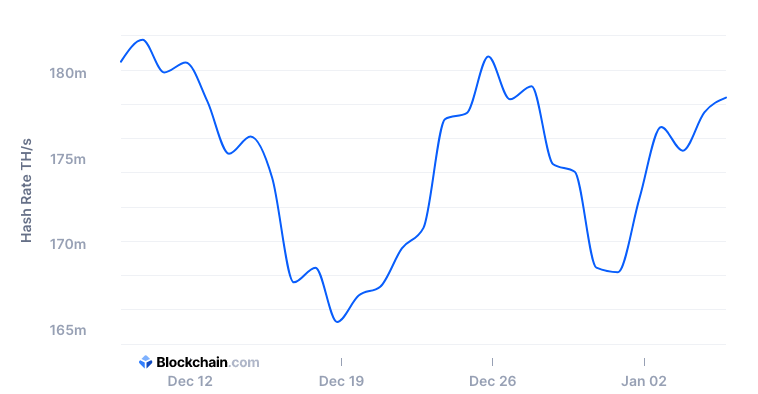 BIT Mining and other major Kazakhstan mining services operators like the Chinese firm Canaan did not immediately respond to Cointelegraph’s request for comment.

Bitcoin and Ether heading $100K and $5K in 2022: Bloomberg Intelligence

Bitcoin and Ether heading $100K and $5K in 2022: Bloomberg Intelligence

The biggest consumer brands that engaged with crypto in 2021