Bitcoin (BTC) fell more than 2% from local highs during Jan. 12 in the latest move to keep market participants guessing about what’s to come for the largest digital asset. 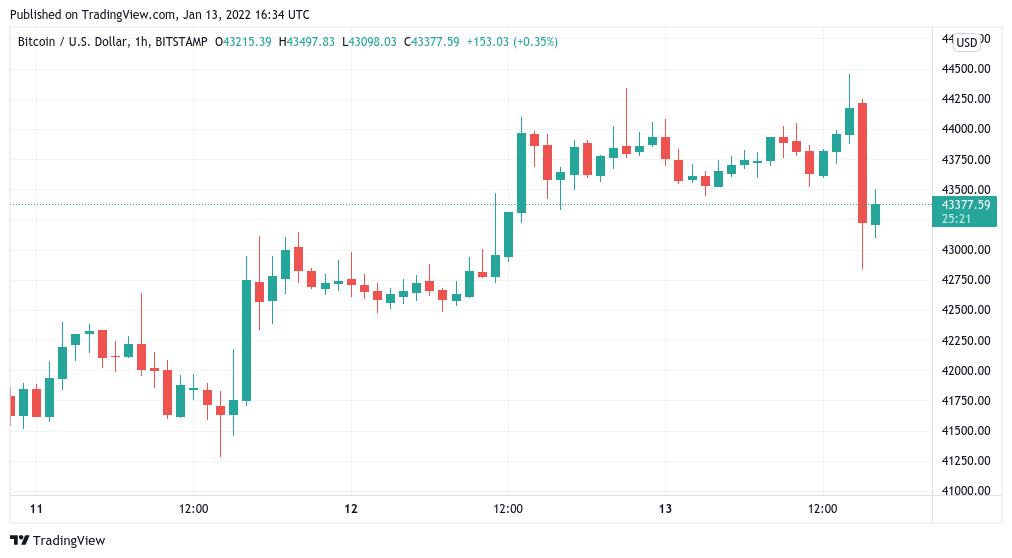 «One step at a time»

Data from Cointelegraph Markets Pro and TradingView tracked the pullback for BTC/USD after the pair hit its highest levels in more than a week.

A trip to $44,450 on Bitstamp after the Wall Street open was followed by an hourly candle which at one point sparked losses of $1,500.

A fresh sign that rangebound activity remains the order of the day for Bitcoin, bulls were disappointed after multiple calls for a fairly easy squeeze toward $46,000.

For popular trader and analyst Scott Melker, » there was still no clear sign of direction.»

«Still just chopping sideways,» he told Twitter followers on the day, noting that Bitcoin had swept lows with its sub-$40,000 dive earlier in the week, which was also in line with his own predictions.

«The $45.7K level is the next area of interest that’s on my radar. It will be key to flip that level for the bulls,» he wrote.

«BTC looks great on LTF but still has a lot of work to do on HTF to call this a proper reversal. One step at a time.»

Others were more hopeful of a paradigm shift coming in the mid-term.

«Over the coming days and weeks, BTC may reveal a new market structure in which case it would be well worth paying close attention to it,» trader and analyst Rekt Capital forecast.

Related: Traders say Bitcoin run to $44K may be a relief bounce, citing a repeat of December’s ‘nuke’

Options traders come under the spotlight

New research also suggested why $40,000 was short lived as a dip and $44,000 conversely became an area of resistance afterward.

According to crypto trading firm QCP Capital, the determining factor lies in options markets, which have now become significant enough to have a «material impact» on BTC price action.

«For instance, one key reason for the lack of follow through in BTC and Ether below $40,000 and $3,000 is possibly the few large players owning strikes around those levels. They naturally create support as they bid for spots to trade the delta there. And when they take take profit on those option positions, the upside impact on the market is very clear as well,» a Telegram update explained.

«Additionally, a sharp options player who had bought 42,000 January calls started taking profit on those around the $44,000 spot level, naturally creating some resistance there.»

Bitcoin cycle is far from over and miners are in it for the long haul: Fidelity report