Dogecoin (DOGE) prices rose substantially Friday as Elon Musk announced that Tesla would start accepting it as payments for merchandise.

After the announcement, DOGE price jumped nearly 13%, hitting a 30-day high a $0.2150. Its upside move came as a part of a larger intraday rally that was taking place already before Musk’s Dogecoin tweet went viral.

The DOGE price went up by over 25% on Friday before correcting lower to $0.1986 on profit-taking. 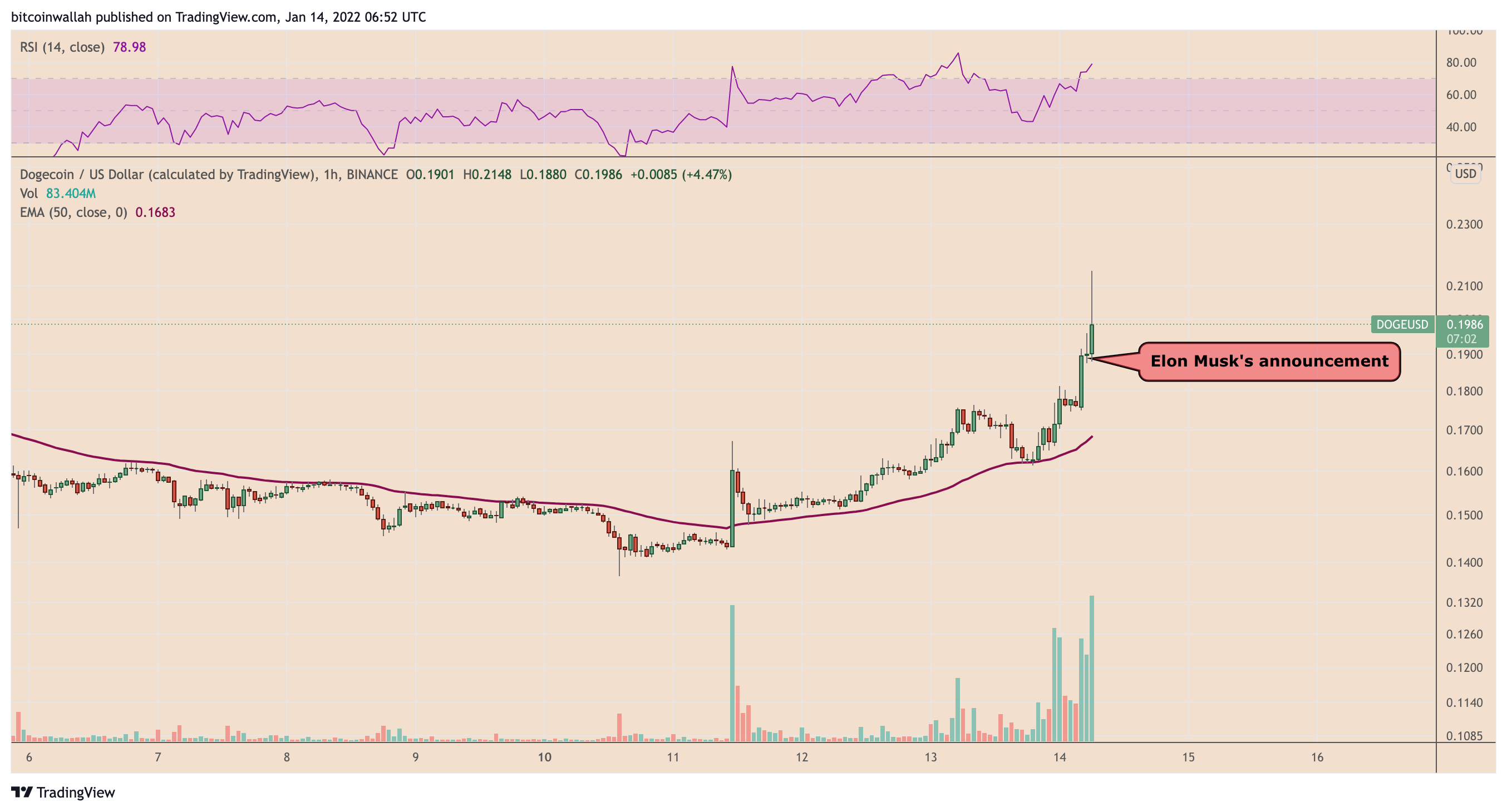 Tesla’s integration of a DOGE payment option on its online shopping portal came almost a month after Musk shared his willingness to accept the cryptocurrency as payment on a test basis.

At the center stage of Musk’s love for DOGE was its «better-than-Bitcoin» features, primarily as a payment option due to its lower electricity consumption. In excerpts from Musk’s statements to Time Magazine he explained that:

«Fundamentally, Bitcoin is not a good substitute for transactional currency. Even though it was created as a silly joke, Dogecoin is better suited for transactions.”

The billionaire entrepreneur further stressed that Bitcoin’s cost per transaction is high while its transactional volume is low compared to DOGE. As a result, Bitcoin could be well off being a store-of-value asset. On the other hand, DOGE could keep on encouraging people to spend.

What’s next for DOGE?

The latest round of buying in the Dogecoin market somewhat subsided as DOGE tested a multi-month resistance trendline for a topside breakout.

In detail, DOGE price rally was rammed into a descending trendline resistance that had been capping its upside attempts since May 2021. On Friday, the trendline again became instrumental in sending DOGE from its intraday top of $0.2150 to $0.1958, as shown in the chart below. 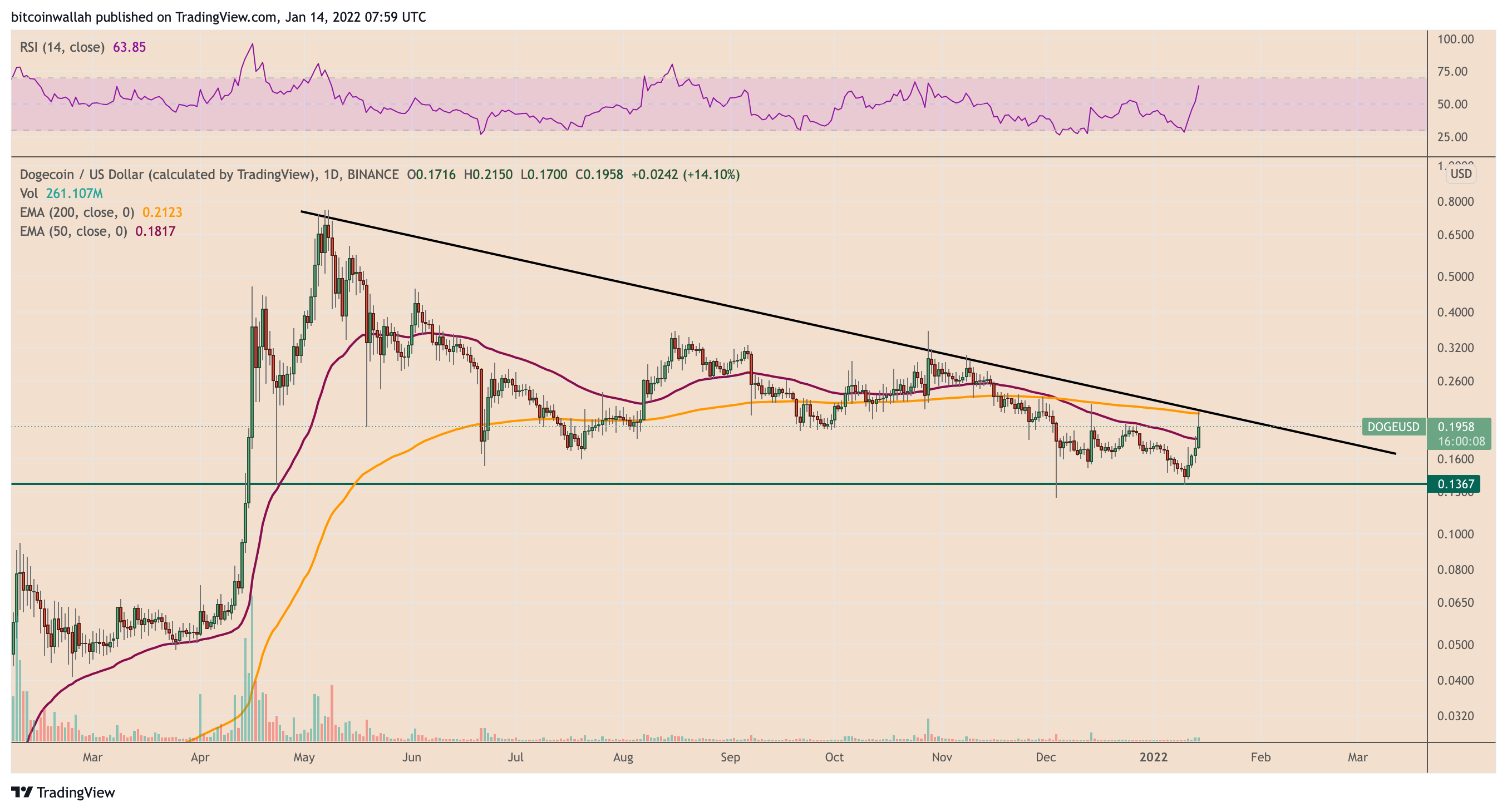 Meanwhile, the Dogecoin’s 200-day exponential moving average (200-day EMA; the orange wave) also played a key role in limiting its gains on Jan. 14. Together, the resistance confluence hinted that DOGE price may pull back from its ongoing uptrend in the coming sessions.

Should this happen, the token will look poised to test its 50-day EMA (the velvet wave) as support, with the possibility to extend its correction towards $0.1367 due to its recent history as support.

Conversely, a decisive breakout above the descending trendline resistance and the 200-day EMA could have traders eye $0.30 as their next upside target in the Dogecoin market. The area surrounding the $0.30-level had earlier served as resistance.

Carbon credit NFTs are only effective if burned, experts say

Reinventing yourself in the Metaverse through digital identity

How to earn interest from crypto saving accounts?

How do you pick your next NFT? Community responds

3 signs Ethereum price is on track toward $2.5K by September