3 reasons why Dogecoin price can now gain 50% by September

At least three market catalysts show that Dogecoin (DOGE) could climb by at least 50% by the end of Q3/2022.

Dogecoin has been painting a «falling wedge» pattern on its longer-timeframe charts since May 2021, hinting at potential for a bullish reversal in the coming months.

Falling Wedges appear when the price trends lower inside a range defined by two descending, converging trendlines. Their occurrence coincides with declining trade volumes, suggesting that trading activity slowed down due to the narrowing price range.

A break of the wedge to the upside, coupled with a rise in trading volumes, suggests the asset is  breaking out. As a rule of technical analysis, a falling wedge breakout can push the price upward by as much as the maximum distance between the structure’s upper and lower trendline.

Applying the classic theory to Dogecoin suggests that it would rise towards $0.40 if the breakout occurs near the $0.14-level, or about 190% above today’s price.

At its worst, the falling wedge breakout could have DOGE’s price rally a little over 50% to $0.21, given its breakout point comes to be near the apex around $0.75. 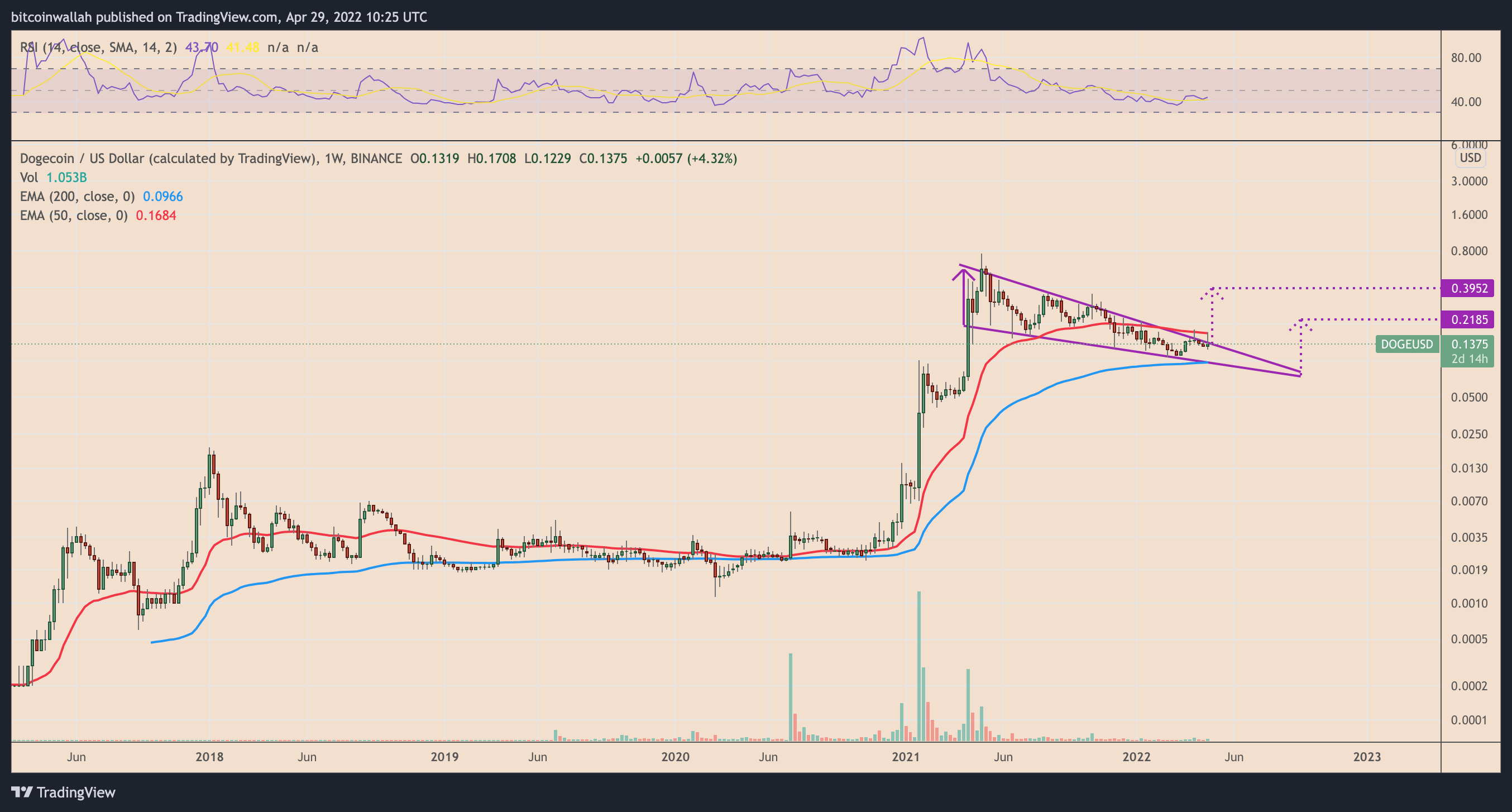 Earlier this week, Twitter announced that it had accepted Elon Musk’s bid to buy its social media platform for $4 billion. Dogecoin price reacted bullishly on the possibility that Musk would integrate DOGE as one of the official payment mediums for Twitter’s subscription services, based on his recent recommendations to the company’s board.

Noelle Acheson, head of market insights at Genesis Global Trading, noted that DOGE’s price rally gets its cues from «very much speculation,» given Musk still has to confirm whether or not he would add a Dogecoin payment option on Twitter.

“But the possibility, even if it is remote, is enough to get traders excited about the potential gain in DOGE adoption,» he told Bloomberg.

DOGE investors are getting excited

Musk’s Twitter acquisition announcement on April 25 and its subsequent positive impact on Dogecoin prices, which rose by nearly 20% on the same day, coincided with a spike in retail and institutional interest.

For instance, internet queries for the keyword «buy Dogecoin» shot up by 392% on April 25, according to Google Trends. Meanwhile, the volume of on-chain DOGE transactions with a value exceeding $100,000 reached $2.59 billion on the same day.

«This is the highest volume since March 24, and represented 94% of the total volume,» data analytics platform IntoTheBlock noted.

CryptoWallet.com, a cryptocurrency card service, also confirmed the same in an email statement to Cointelegraph, noting that «the online interest in buying Dogecoin skyrocketed to almost four times the average volume in one day due to Musk acquiring full ownership of Twitter.»

Turning up the volume: Blockchain projects aim to disrupt the music industry