Bitcoin (BTC) topped out at around $46,000 on April 4 before freefalling back to $38,000, causing much frustration among crypto traders who have been so used to the market’s unreal returns in the past two years after the March 2020 crash.

February and March showed signs of recovery, especially after the steep declines in December and January. But, the question is, why has the bullish momentum suddenly come to a halt?

The correlation between crypto and equities, particularly Bitcoin and the S&P 500, continues to exist and is expected to last until mid-May when Jerome Powell and the United States Federal Reserve announce a likely 0.5% rate hike to combat inflation. 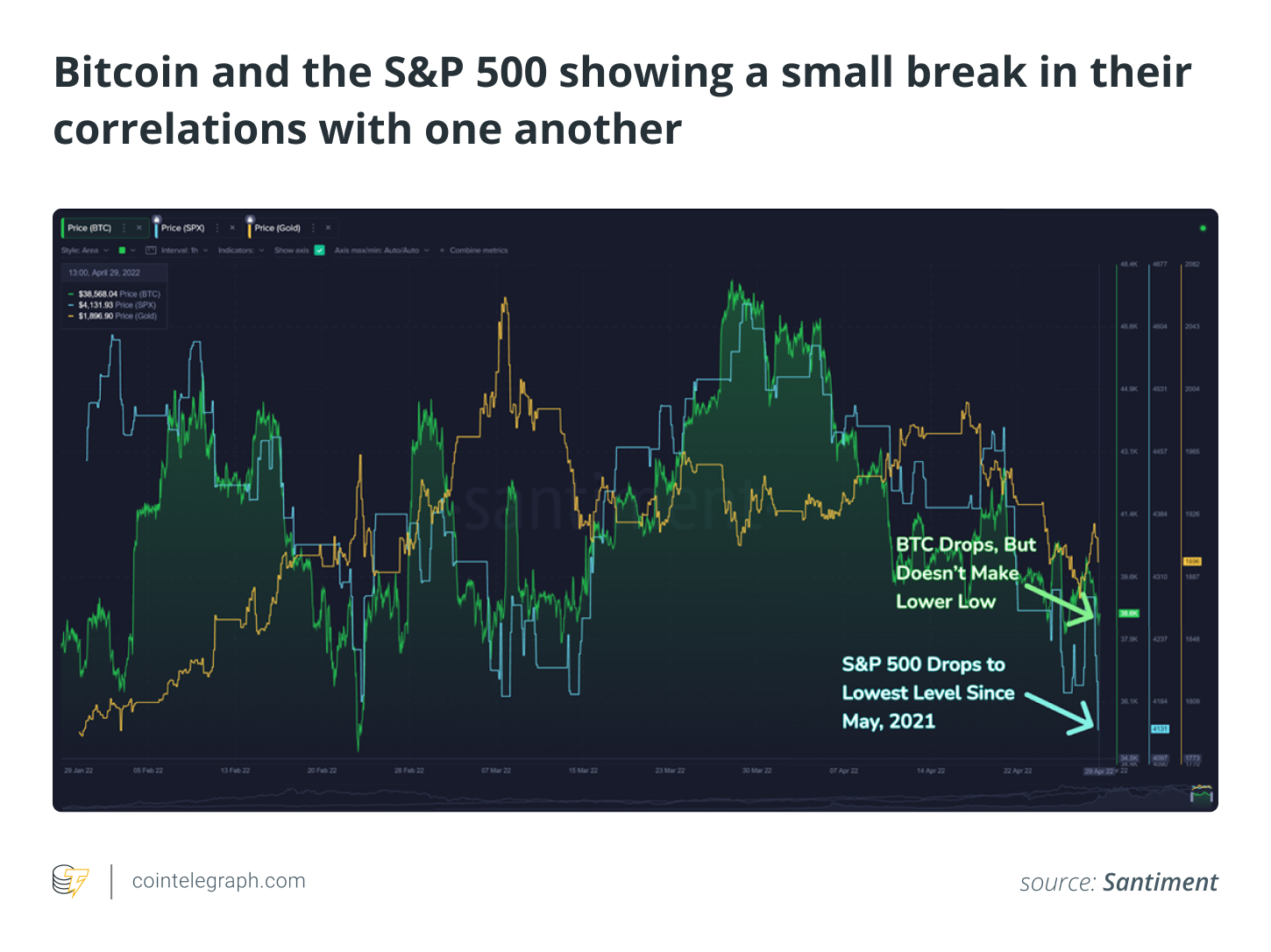 However, this doesn’t necessarily mean that Bitcoin will exhibit further declines. Suppose cryptocurrencies continue to mimic equity price movement and not the other way around. In that case, many speculate that although the S&P 500 has been dropping lately, rate hike fears would likely have been baked in ahead of the Fed’s scheduled meeting. 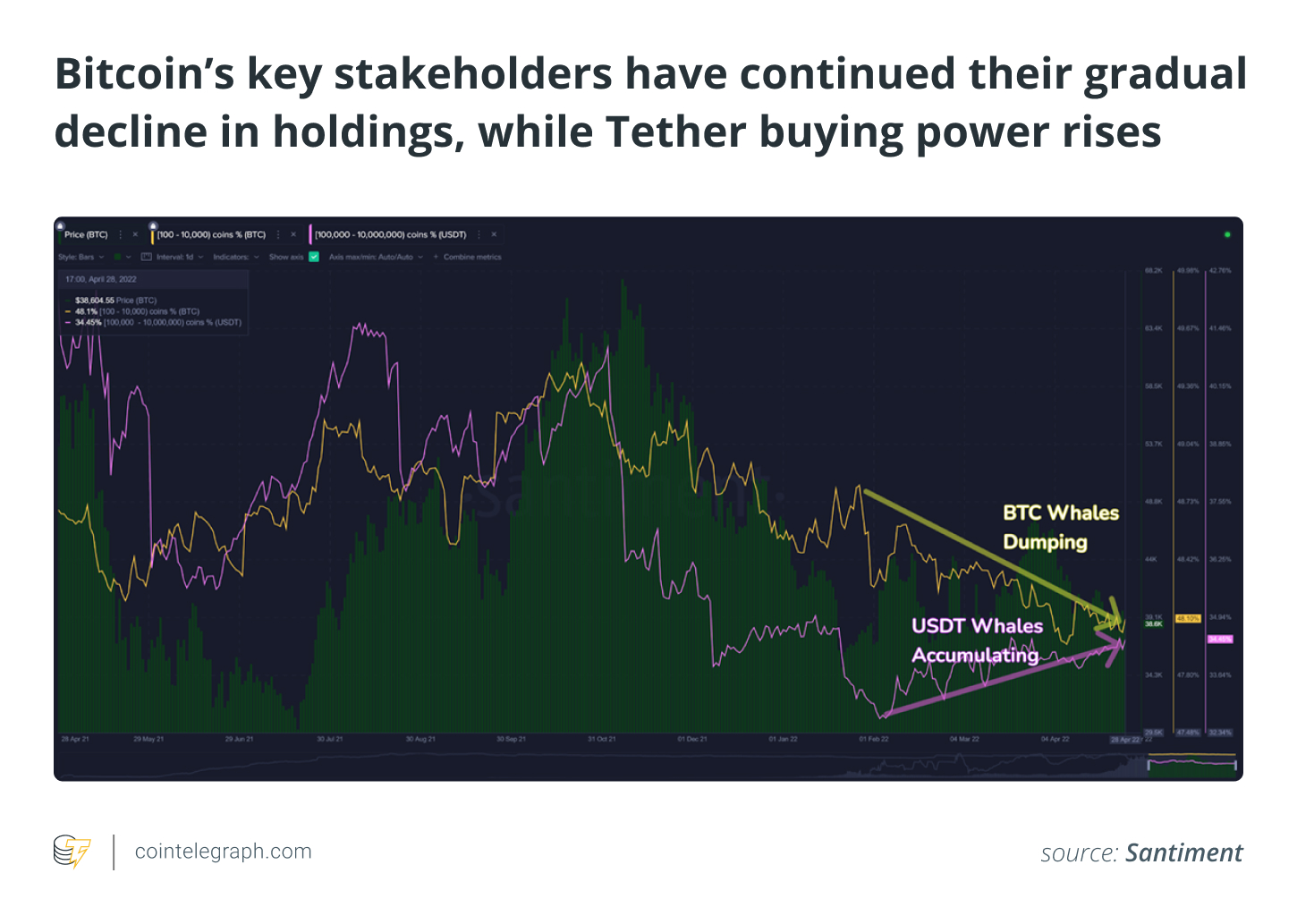 Over the past two months, BTC whales from this key group have dropped 0.6% of their holdings. Meanwhile, the key USDT group has actually added 1.8% of the top stablecoin’s supply.

Although large whale addresses have dumped their BTC supply, evidence shows that prices generally rise when more addresses exist that hold 10 to 100,000 BTC. Addresses holding approximately $3.8 million in total have been created or returned to the BTC network since the Russian-Ukrainian war broke out in late February. 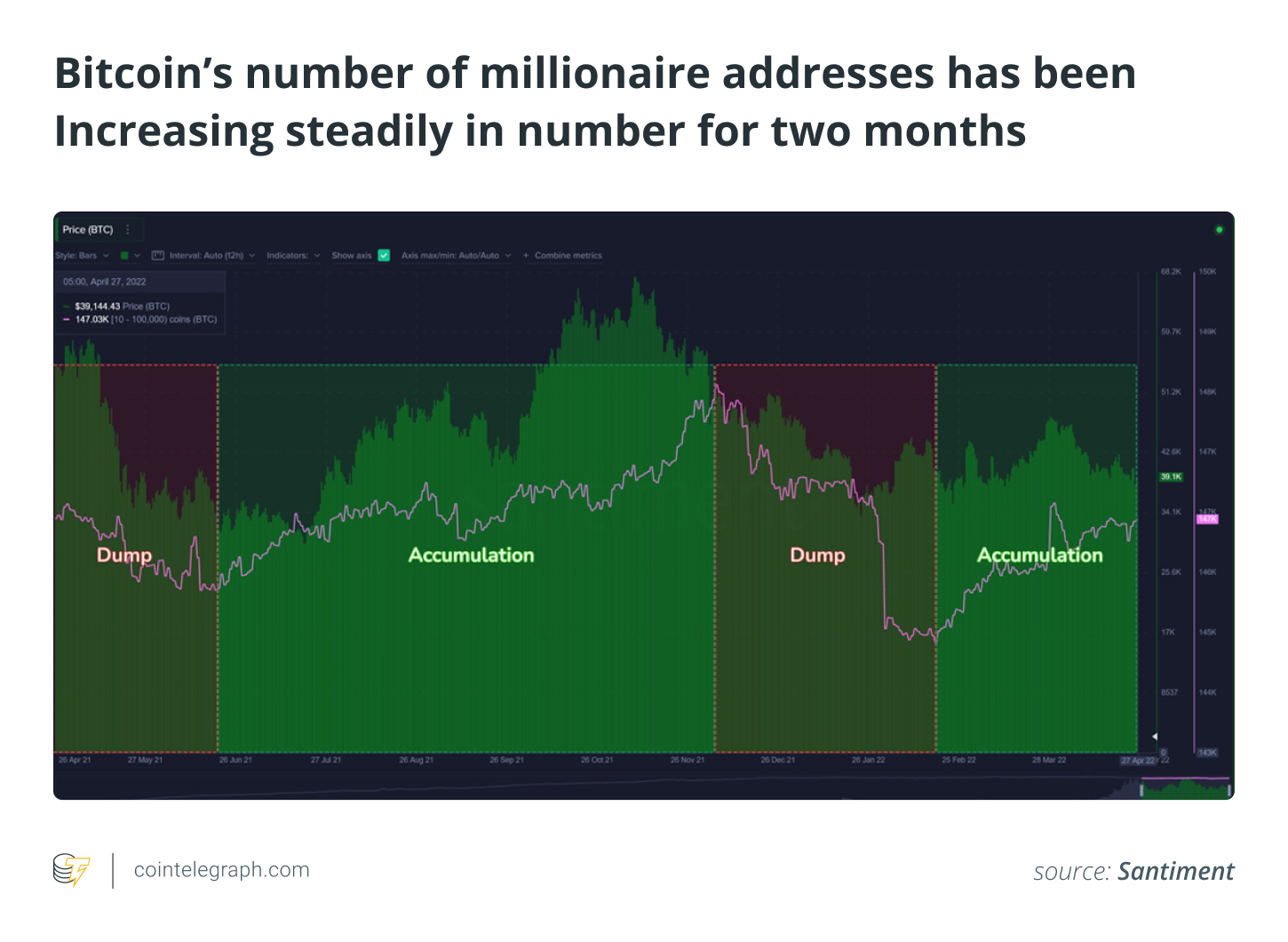 Santiment has found a reliable trend of the mainstream crowd being incorrect the vast majority of the time when they believe in a price event happening too uniformly. Even with the “buy the dip” narrative in full tilt, the chart below shows that prices didn’t bounce as traders hoped. Ironically, it is often when the crowd abandons any inclination to spot the bottom that prices do begin to recover. 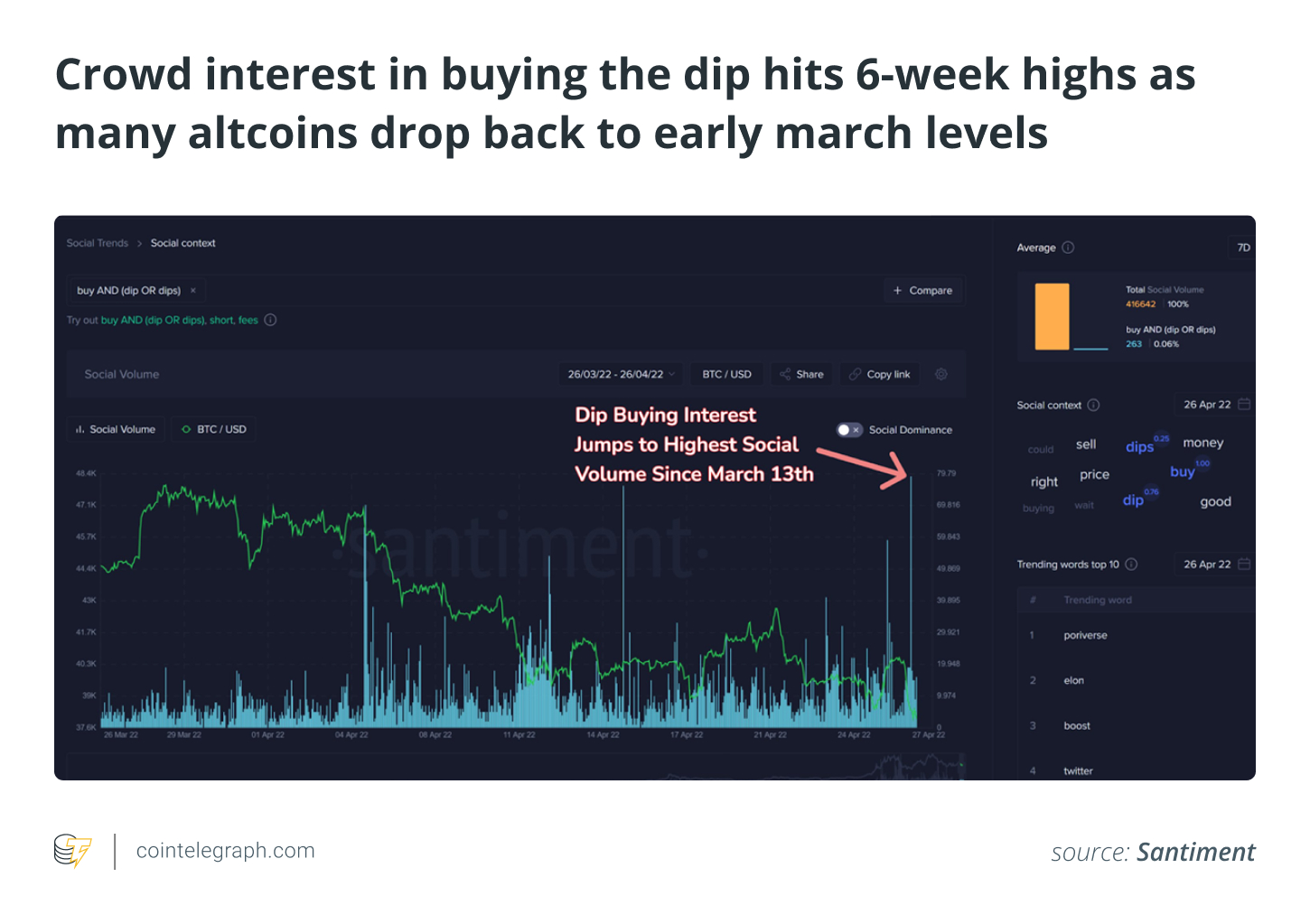 Santiment’s Ether (ETH) whale transaction count metric indicates that levels had begun to rise to the same rate of over 1,400 per day that was seen last week when the dip was quickly scooped up. High-value transactions of over $100,000 would likely indicate that top key stakeholders are beginning to circulate their coins at bullish levels. 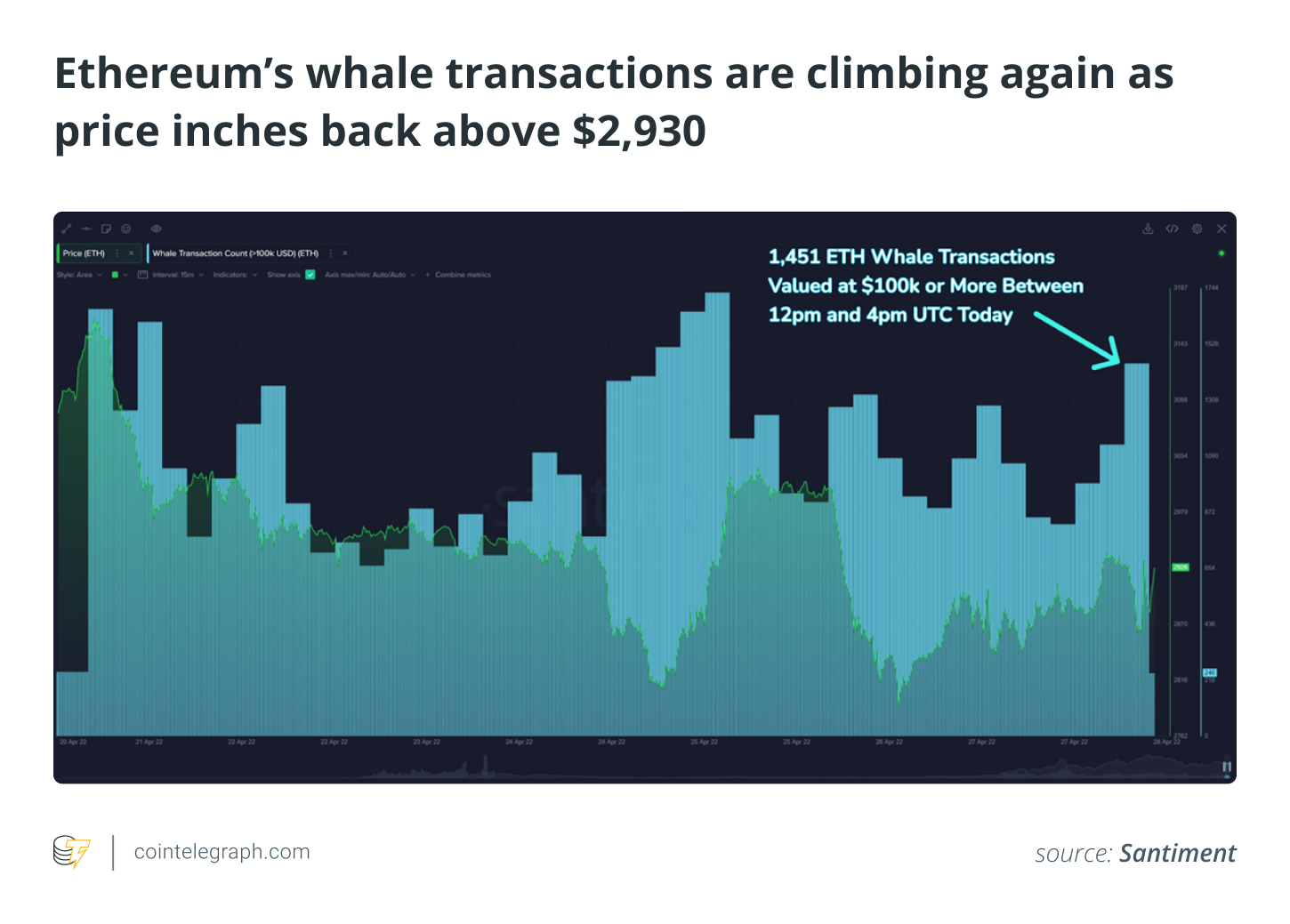 Traders are short heading into May

Exchange funding rates are another price direction indicator. When there are excessive longs (bets in favor of prices rising) like what was seen just after the November all-time high, prices tend to correct. However, the opposite trend appears to be taking place right now.

Significant short funding rates are evident across multiple exchanges, indicating FUD surrounding the crypto markets is apparent. Generally, when BTC and altcoins are shorted in tandem to this degree, there is a notably higher likelihood of prices rising to force liquidations against those betting against crypto prices rising.

It is important to look for capitulation signs as an indicator that a price bottom may finally be in. Currently, there’s no overwhelming evidence of trader fear, but negative funding rates and a few other signals are certainly useful signs.

To an extent, a fundamental event like a Fed rate hike may muddle data for a little while longer. But, signs at least appear to be pointing toward the most bullish divergences not seen since a month ago.

Cointelegraph’s Market Insights Newsletter shares our knowledge on the fundamentals that move the digital asset market. This analysis was prepared by leading analytics provider Santiment, a market intelligence platform that provides on-chain, social media and development information on 2,000+ cryptocurrencies.