Was Terra’s UST cataclysm the canary in the algorithmic stablecoin coal mine?

The past week has not been an easy one. After the collapse of the third-largest stablecoin (UST) and what used to be the second largest blockchain after Ethereum (Terra), the de-peg contagion seems be spreading wider.

While UST has completely de-pegged from dollar, trading at sub $0.1 at the time of writing, other stablecoins also experienced a short period where they also lost their dollar peg due to the market-wide panic.

Tether’s USDT stablecoin saw a brief devaluation from $1 to $0.95 at the lowest point in May. 12. 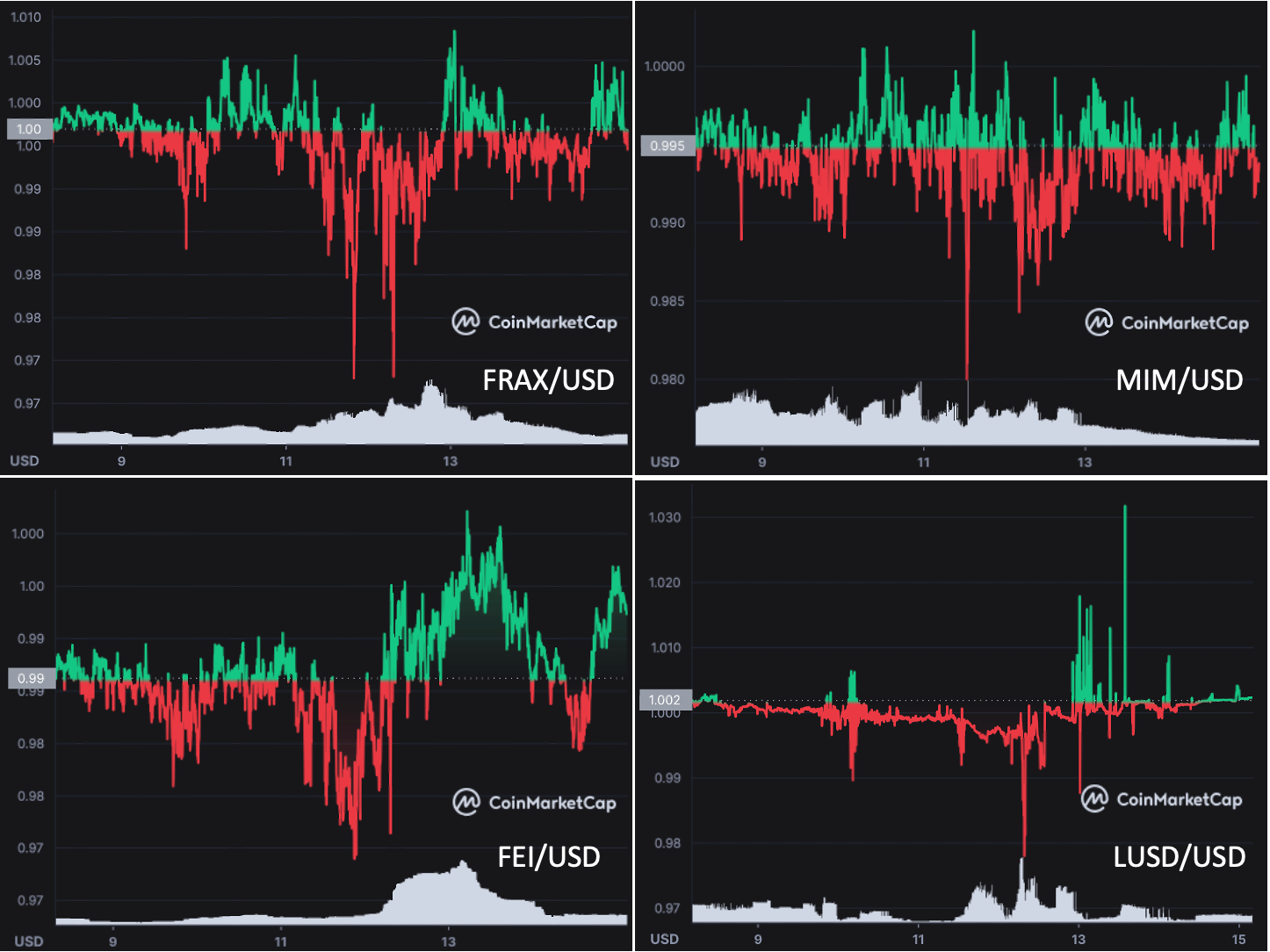 Although it is common for stablecoins to fluctuate in a very narrow range around the $1 peg, these recent trading levels are only seen during extremely stressed market conditions. The question that now sits in the mind of investors is will the fear spread even wider and will another stablecoin de-peg?

Let’s take a look at the mechanism of some of the major stablecoins and how they are currently traded in the Curve Finance liquidity pool.

The main purpose of stablecoins is to preserve a stable value and provide investors an avenue to park their money when volatility from other crypto assets are much higher.

Asset-backed stablecoins were in favor during downturn, except for USDT

USDC, DAI and USDT are the most traded asset-backed stablecoins. Although they are all over-collateralised by fiat reserves and crypto currencies, USDC and USDT are centralised while DAI is de-centralised.

USDC’s collateral reserves are held by U.S. regulated financial institutions, whereas USDT’s reserves are held by Tether Limited, which is controlled by BitFinex. DAI on the contrary does not use a centralised entity but uses the primary market borrowing rate to maintain its dollar peg, which is called the Target Rate Feedback Mechanism (TRFM).

DAI is minted when users borrow against their locked collateral and destroyed when loans are repaid. If DAI’s price is below $1, then TRFM increases the borrowing rate to decrease DAI’s supply as less people will want to borrow, aiming to increase the price of DAI back to $1 (vice versa when DAI is above $1). 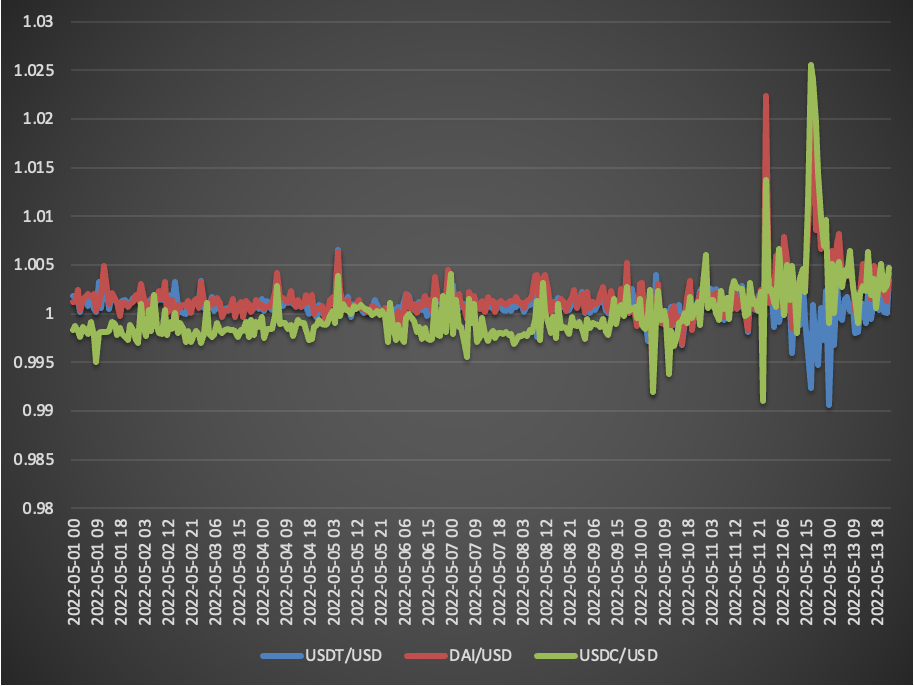 Tether’s USDT has long been controversial despite its large market share in the stablecoin space. It was previously fined by the U.S. government for mis-stating the type of cash reserves they have. Tether claims to have cash or cash-equivalent assets to back USDT. However, a large portion of the reserves turn out to be commercial paper — a form of short-term unsecured debt, which is riskier and is not “cash equivalent” as dictated by the U.S. government.

The recent Terra debacle and the lack of transparency of their reserves triggered fresh concerns about USDT. The price reacted violently with a brief de-valuation from $1 to $0.95. Although USDT’s price has recovered and re-pegged closely back to $1, the concerns are still there.

This is shown clearly in the largest liquidity pool on Curve Finance. The DAI/USDC/USDT 3pool in Curve shows a proportion of 13%-13%-74% for each of them respectively. 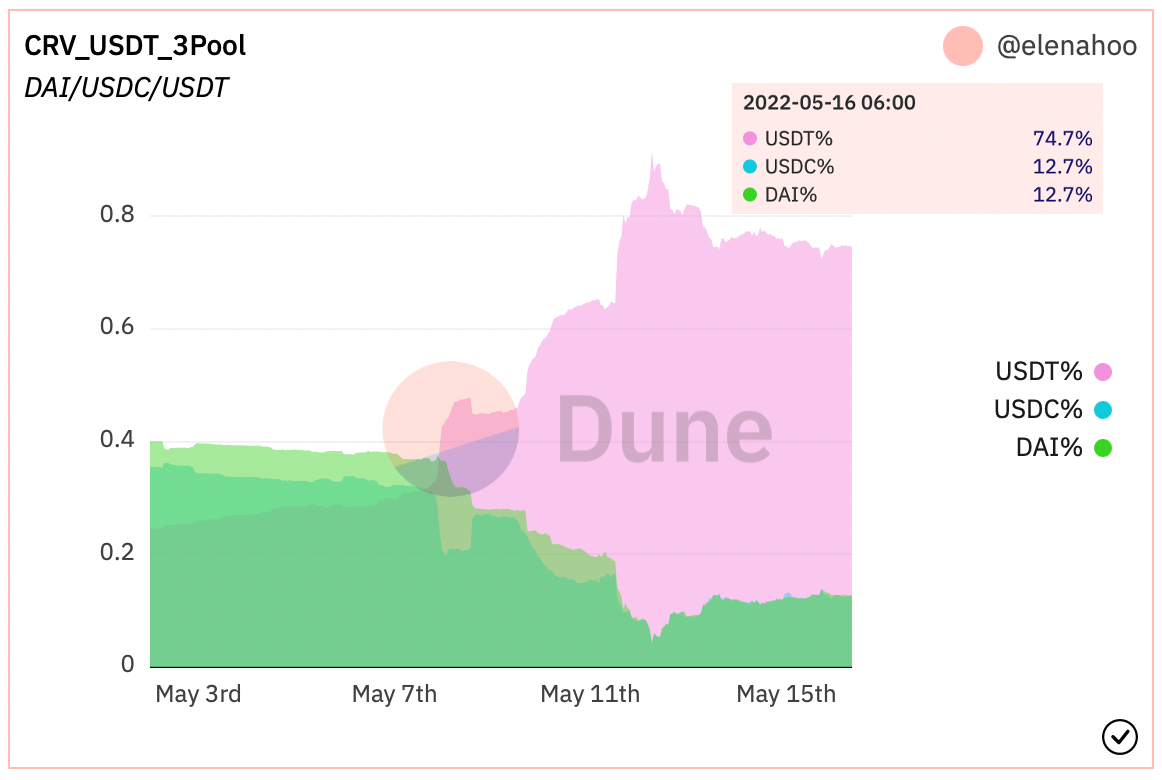 Under normal circumstances, all the assets in a stablecoin liquidity pool should hold equal (or very close to equal) weight because the three stablecoins are all supposed to be valued at around $1. But what the pools have shown in the past week is an unbalanced proportion, with USDT holding a much larger percentage. This indicates the demand for USDT is much smaller than the other two. It could also mean that for USDT to hold the same dollar value as the other two, more units of USDT are needed in the pool, indicating a lower value for USDT compared to DAI and USDC.

A similar imbalance is observed in the DAI/USDC/USDT/sUSD 4pool. It is interesting to see that sUSD and USDT both spiked in proportion around May. 12 during the peak of the stablecoin fear. But sUSD has quickly reverted back to the equal portion of 25% and since then even dropped in percentage while USDT remains as the highest proportion in the pool. 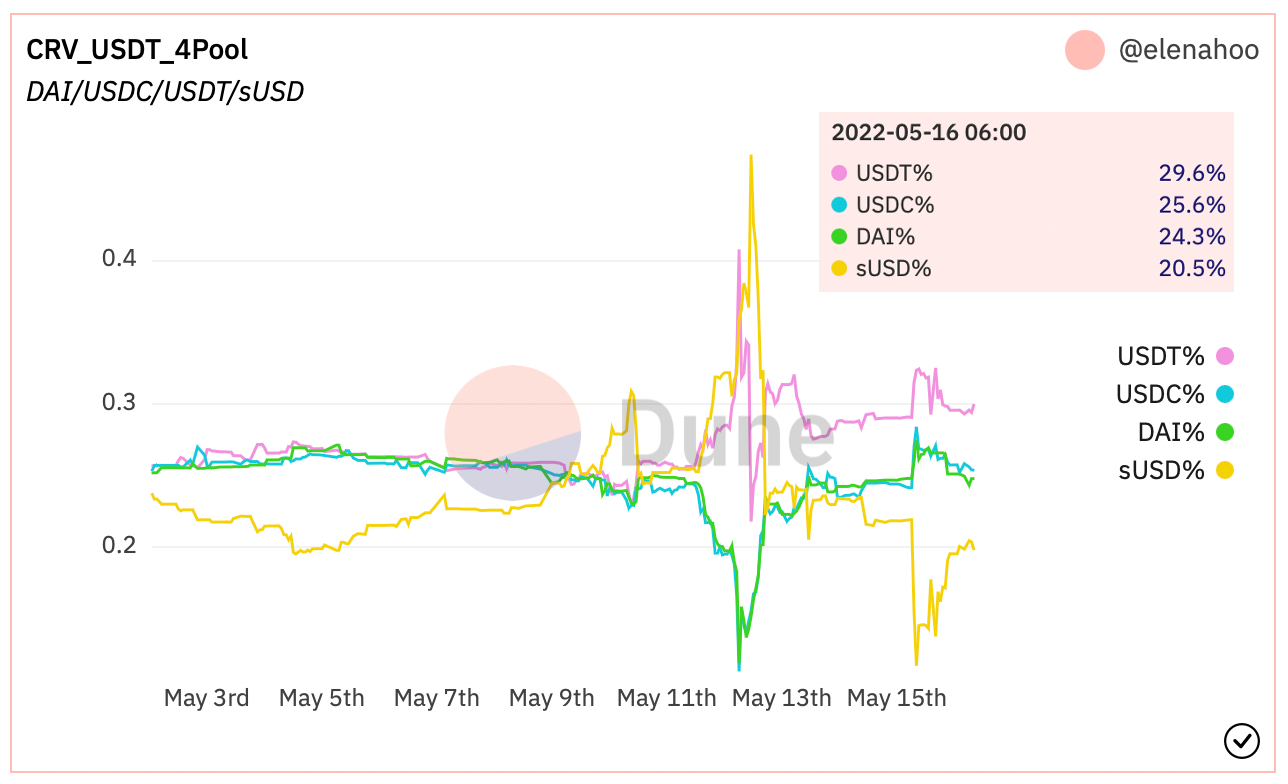 The Curve 3pool has a daily trading volume of $395 million and $1.4 billion total value locked (TVL). The 4pool has a $17 million trading volume and $65 million TVL. Both pools show USDT is still less favourable.

An algorithmic stablecoin is a different mechanism from an asset-based stablecoin. It has no reserves therefore it is uncollateralized. The peg is maintained through algorithmically minting and burning the stablecoin and its partner coin based on the circulating supply and demand in the market.

In the recent perfect storm of stablecoin panic, the ratio of FRAX versus the other three stablecoins spiked to 63% to 37%. Although the disproportion can already be seen from early March 2022, the collapse of UST definitely exacerbated the fear of a FRAX de-peg.

A similar surge in fear triggered by the Terra UST de-peg event is also present in MIM — Abracadabra Money’s algorithmic stablecoin. The Curve MIM/3CRV pool shows the MIM proportion jumped to 90% — a similar level reached in January when the Wonderland scandal came about. 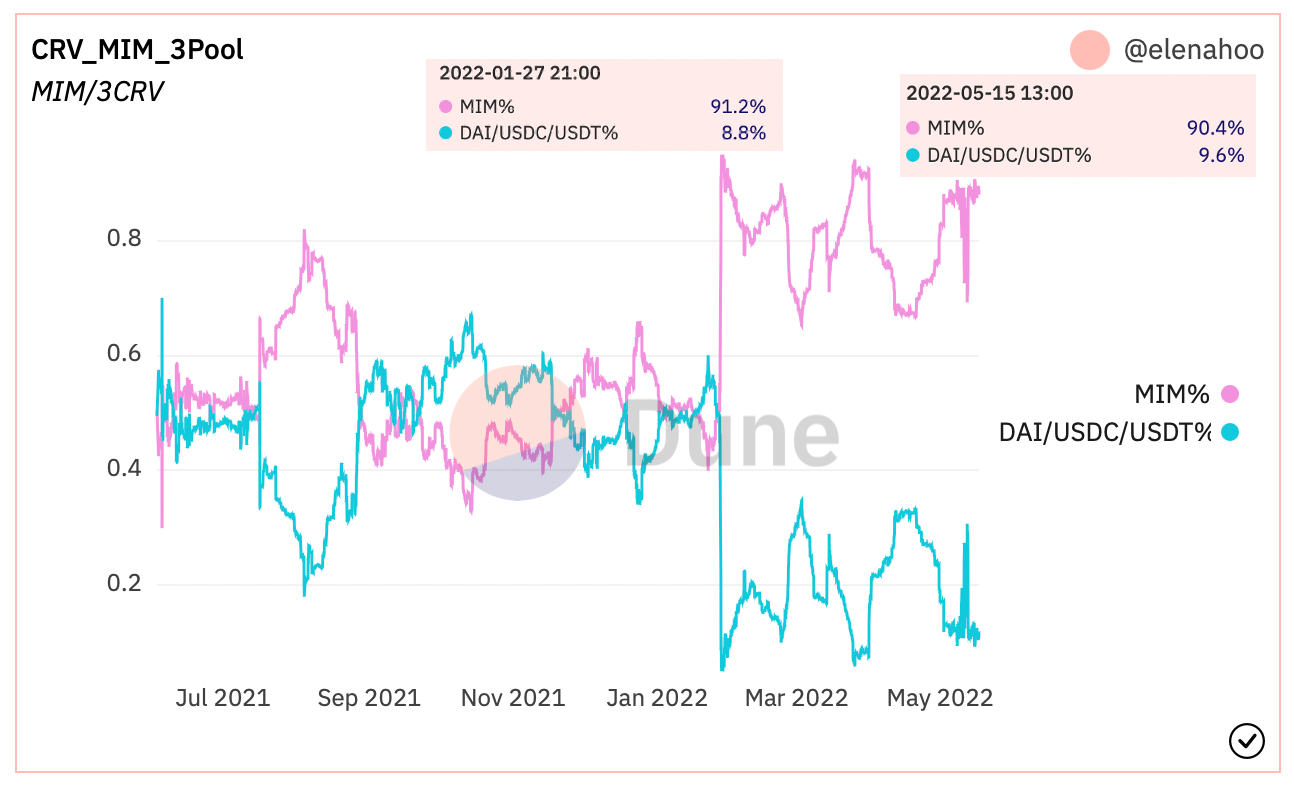 Despite the algorithm similarity to DAI, MIM doesn’t use ETH directly as collateral but instead uses interest-bearing tokens (ibTKN) from Yearn Finance — ywWETH. The additional layer of complexity makes it more sensitive to catastrophic events such as the UST de-peg event.

The goal for all stablecoins is to maintain a stable value. But all of them experience volatility and a lot of them have deviated away from the $1 peg much more than expected. This is probably the reason why it has led some regulators to quip that stablecoins are neither stable nor coins.

Nonetheless, stablecoin volatility is much lower than any of the other cryptocurrencies and still provides a safe harbour for crypto investors. It is therefore important to understand the risks embedded in different stablecoins’ peg mechanisms.

Many stablecoins have failed in the past, UST is not the first and it will certainly not be the last. Keeping an eye on not only the dollar value of these stablecoins but also how they stand in the liquidity pool will help investors identify potential risks ahead of time in a bearish and volatile market.