How will GameFi and P2E blockchain gaming evolve in 2022? Report

Crypto gaming has grown in popularity as more players collect and trade digital assets, generating a dependable income for game developers and creating value for players. In a recently published report, Cointelegraph Research shows how Axie Infinity gamers in the Philippines were able to earn their regular monthly salary in 2020 simply by playing the game, at a time when measures to prevent the spread of the COVID-19 pandemic brought economic hardship to the country.

Axie Infinity is a powerhouse of play-to-earn (P2E) blockchain gaming, not unlike Bitcoin’s (BTC) status as the powerhouse of cryptocurrencies. Like Bitcoin, it has the eyes of the mainstream public, is a target for competitors, and is not a stranger to controversy, with the Ethereum sidechain developed for the game recently hacked for 173,600 Ether (ETH) and 25.5 million USD Coin (USDC), worth more than $612 million at the time.

Gameplay is important for future growth

Cointelegraph Research assessed five of the most popular P2E games — Axie Infinity, Splinterlands, Bomb Crypto, Alien Worlds and DeFi Kingdoms — in a 30-plus page report published in May titled “GameFi: Can blockchain-based gaming redefine the industry?” The gameplay in each game will not blow a veteran console gamer away. They are very different experiences than, say, Call of Duty.

Download the full report here, complete with charts and infographics

But players can still have a thoroughly enjoyable experience playing blockchain games, as is clearly shown by the number of users. GameFi development is still in its early days, and games will evolve to be more visually attractive and dynamic in the future. Like all downturns, the current bear market can be a conduit for innovation and development.

GameFi is poised to take advantage of this, and recent events show confidence in the future of blockchain gaming, with Immutable X raising $200 million for game development in a recent fundraising round. Nevertheless, blockchain game developers will continue to face the challenge of adding new users. Despite Axie Infinity’s explosive 2021, the current year paints a much more modest picture, with a steady decline in monthly new accounts added. 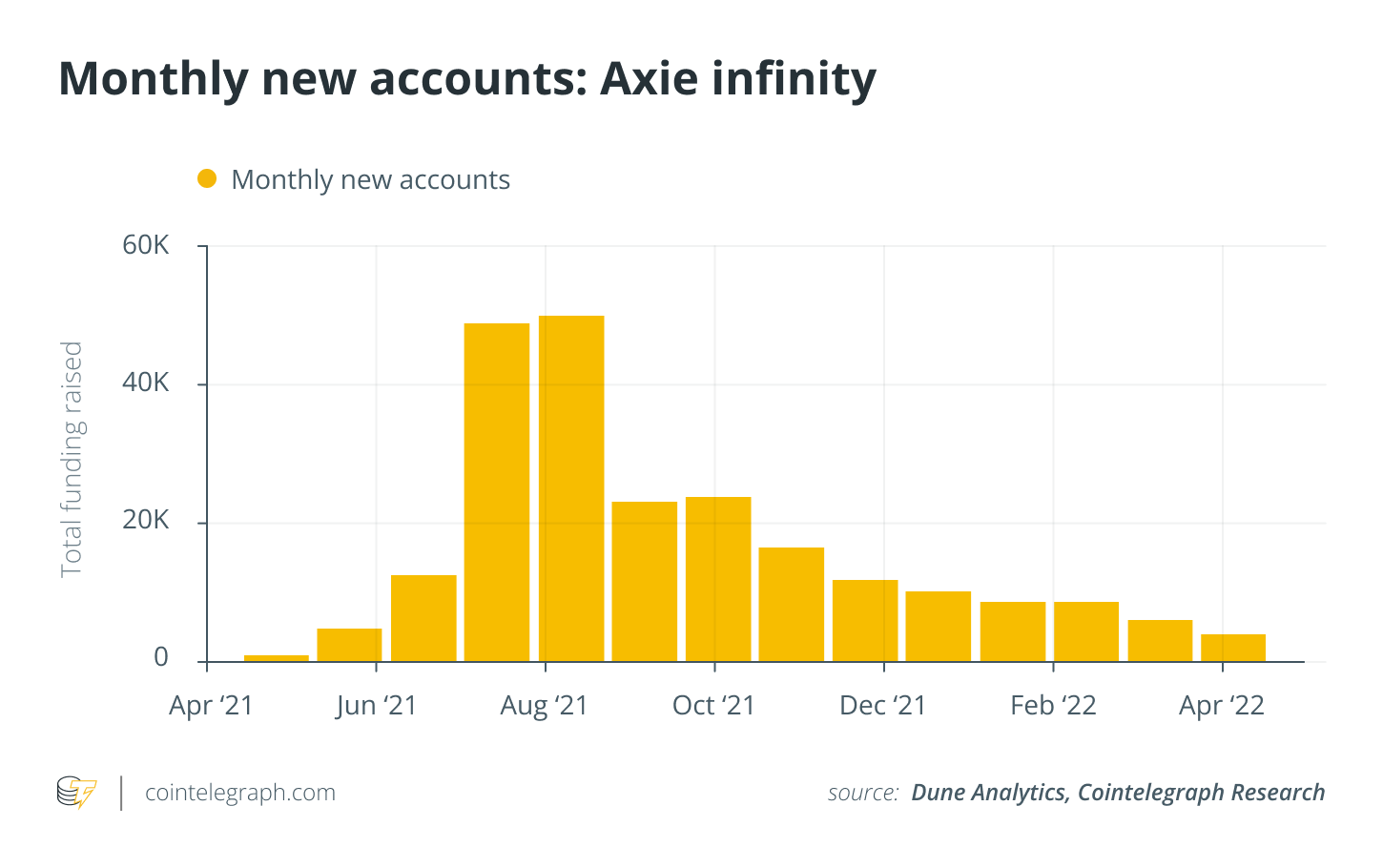 The five titles assessed in the GameFi report do a great job making crypto and NFT investing fun, and Cointelegraph Research’s report looks at their entry cost, playing modes, overall strategic difficulty and in-game mechanics to arrive at a gameplay score for each title.

With Axie Infinity almost entirely dependent on new players putting fresh money into the game, diminishing new player growth could send the project’s whole economy into a recession. Keeping a focus on gameplay development will assist the GameFi sector in reaching a larger audience.

There are examples of successful non-blockchain game economies, but few of them have achieved the growth and scale of Axie Infinity and Splinterlands. Before the emergence of GameFi, in-game virtual assets were often viewed as inherently worthless, outside of brief periods of popularity among users. GameFi differentiates itself from non-blockchain gaming with a key feature: property rights. 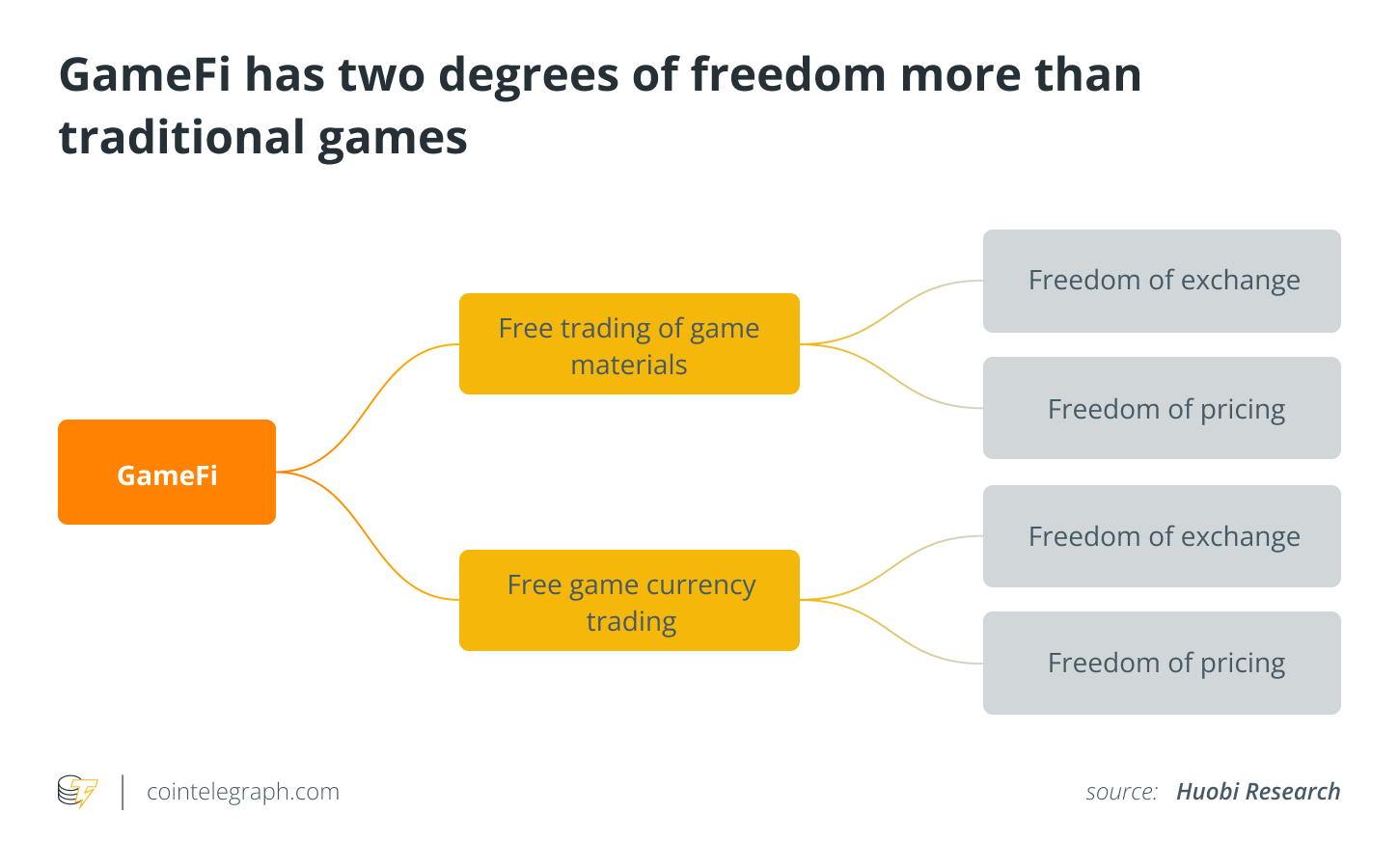 Blockchains and their underlying technologies enable game developers to offer users a secure way to prove ownership and transact with one another. Blockchain technology also allows for freedom of pricing and exchange, including of the game’s materials and currency.

Ultimately, great gameplay and strong in-game economies with a high degree of economic freedom can help GameFi weather the difficult market conditions of 2022 and continue to attract new users. The marriage between gaming and decentralized finance opens a world of previously unheard-of possibilities for many gamers, allowing them to earn a living playing high-quality, enjoyable games.

This article is for information purposes only and represents neither investment advice nor an investment analysis or an invitation to buy or sell financial instruments. Specifically, the document does not serve as a substitute for individual investment or other advice.