Ethereum’s native token Ether (ETH) entered its «oversold» territory this June 12, for the first time since November 2018, according to its weekly relative strength index (RSI).

This is the last time $ETH went oversold on the weekly (hasn’t confirmed here yet).

I had no followers, but macro bottom ticked it.

Note, you can push way lower on weekly rsi, not trying to catch a bottom. https://t.co/kLCynTKTcS

Traditional analysts consider an asset to be excessively sold after its RSI reading fall below 30. Furthermore, they also see the drop as an opportunity to «buy the dip,» believing an oversold signal would lead to a trend reversal.

Ether’s previous oversold reading appeared in the week ending on Nov. 12, 2018, which preceded a roughly 400% price rally, as shown below. 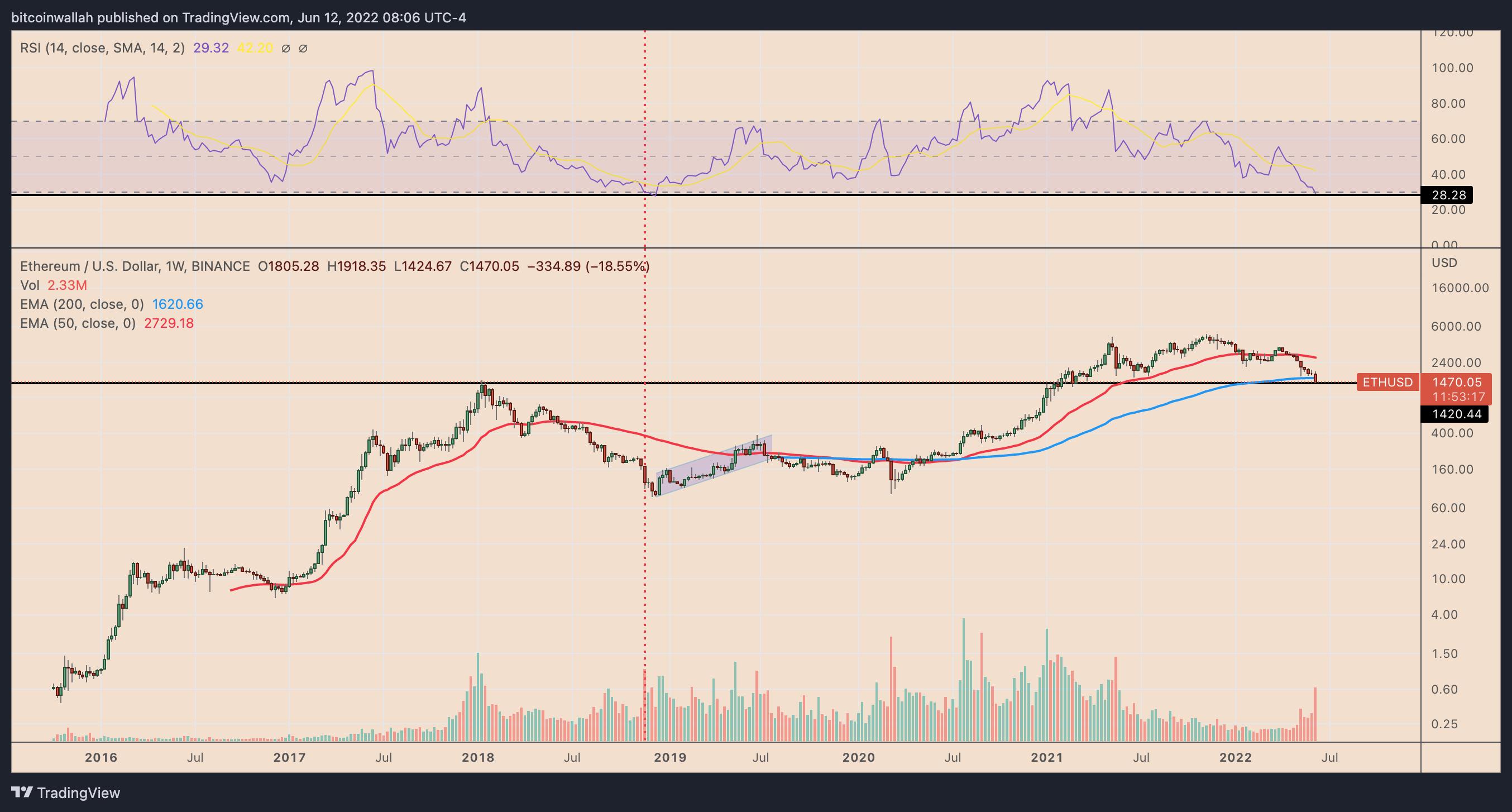 While past performances are not indicators of future trends, the latest RSI’s move below 30 raises the possibility of Ether undergoing a similar—if not an equally sharp—upside retracement in the future.

Suppose ETH logs an oversold bounce. Then, the ETH/USD pair’s immediate challenge would be to reclaim its 200-week exponential moving average (200-week EMA; the blue wave) near $1,620 as its support.

If not, Ether could resume its downtrend, with $1,120 serving as the next target, a level coinciding with the token’s 0.782 Fib line, as shown in the chart below.

The RSI-based bullish outlook appears against a flurry of bearish headwinds, ranging from persistently higher inflation to a classic technical indicator with a downward bias.

In detail, Ether’s price decline by more than 20% in the last six days, with most losses coming after June 10, when the U.S. Labour Department reported that the inflation reached 8.6% in May, the highest since December 1981.

Independent analyst Vince Prince fears the latest ETH decline could extend until the price reaches $650. At the core of his downside target is a massive «head and shoulders» — a classic bearish reversal pattern with an 85% success rate in meeting its profit target, according to Samurai Trading Academy.

… $ETH is now headed towards the $650 USDT area!!! pic.twitter.com/R2KaqiorEd

The analyst noted that the ratio between Ethereum’s and the top three stablecoins’ market capitalization grew to 80% on June 11.

The principle risk here is levered $ETH collateral in DeFi loans getting liquidated in a cascade https://t.co/26u0vXnMMY pic.twitter.com/q555clRaap

Since «most people borrow stablecoins» by providing ETH as collateral, the potential of the Ethereum network becoming less valuable than the top dollar-pegged tokens would make the debt’s value higher than the collateral itself.

«There is nuance as not all stablecoins are borrowed, and also not all are ON ethereum. But nevertheless, the risk of liquidations [is] a hell of a lot higher than it was three months ago.»

6 Questions for Alex Wilson of The Giving Block

What are Bitcoin improvement proposals (BIPs), and how do they work?

Nifty News: Kraft Foods files for NFT and Metaverse patents, Seth Green gets his ape back, and more…

Nifty News: Kraft Foods files for NFT and Metaverse patents, Seth Green gets his ape back, and more…

What are Bitcoin improvement proposals (BIPs), and how do they work?

6 Questions for Alex Wilson of The Giving Block

Bitcoin price drops to lowest since May as Ethereum market trades at 18.4% loss