Solana (SOL) still has room to fall in the near term, but SOL/USD can rally 5,000% if it follows in the footsteps of its top rival Ethereum.

SOL’s risks dropping to $15 on anticipations it would behave like Ethereum during the market crash in 2018.

Notably, Ethereum’s native token Ether (ETH) price fell to nearly $79 in December 2018 after undergoing a 95% correction earlier that year from its peak of $1,529. Afterward, it underwent a long recovery, rising nearly 6,000% over the next four years and thus hitting a record high of around $4,950 in November 2022.

Solana, which rivals Ethereum for its top spot in the smart contracts sector, has fallen by over 85% after peaking out in November 2021 at nearly $267. That leaves the token with the room to fall by another 10% when measured from its said record high.

Popular analyst PostyXBT says SOL could decline to $15, thus mirroring Ethereum’s bear cycle in 2018. What’s more, the Solana token could see an Ethereum-like recovery in the coming years that could take SOL price to over $750, he adds.

For those who question the functionality issues and outages, remember that hype always wins.

Meanwhile, another popular analyst, Spencer Noon, thinks on the same lines, albeit without sharing a clear upside target.

Noon argues that Solana has been going through a «disillusionment» phase that plagued the Ethereum market in 2018, noting that the project would eventually overcome its difficulties.

«Solana has a vibrant developer ecosystem, and its downtime issues are solvable. This will be obvious in retrospect,» he said.

Solana-based investment funds have attracted over $110 million in inflows in 2022 as of July 1, compared to $450.9 million that exited Ethereum funds, according to a recent weekly report by CoinShares. 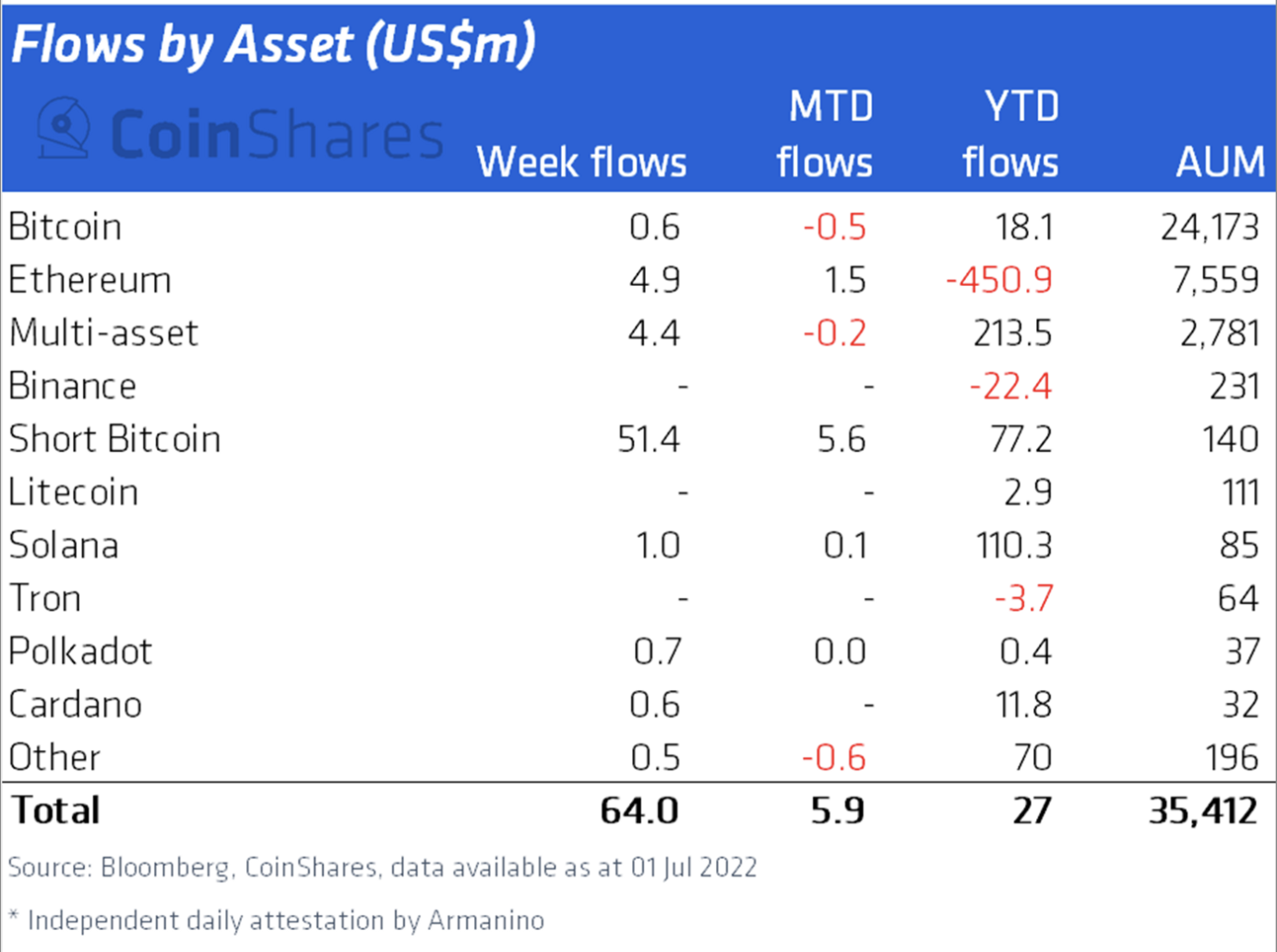 The Ethereum/Solana market cap ratio is currently around 32.5 versus the December 2020 peak of 525.3, according to data tracked by TradingView.

The metrics suggests a strong capital shift into the Solana ecosystem, a trend that may continue in the coming years.

Solana is also posing a serious challenge to Ethereum based on other key metrics.

Related: Traders debate whether Solana (SOL) is a buy now that it’s down 87% from its all-time high

For instance, according to Nansen, Solana’s weekly volumes across major NFT marketplaces, including OpenSea and MagicEden, have been in a constant uptrend, whereas Ethereum’s have tapered off in recent months. 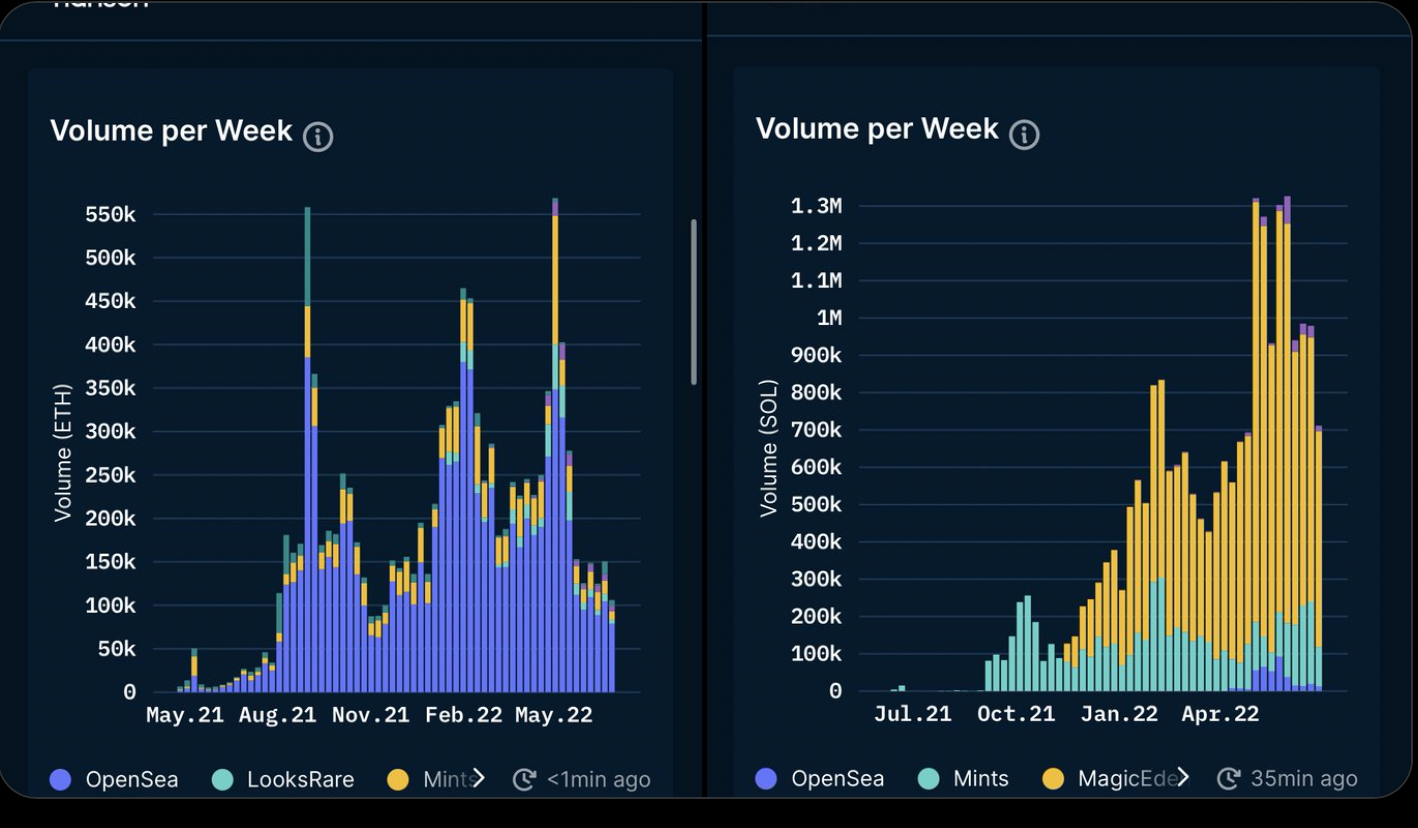 Additionally, cheaper fees are the primary reason why NFT volumes on the Solana blockchain have risen compared to Ethereum, according to Arcane Research’s latest weekly report.

«The pace of the Ethereum blockchain network has decreased while transaction costs have increased, making way for Solana-based NFT marketplaces to pick up steam,» the report noted, adding:

«The average transaction fee on Ethereum was $6.5 in June, in contrast to the few cents users currently pay for block space on Solana.

Similar to NFT volume, the amount of gas fees paid has also seen a strong uptrend since summer 2021 with a smaller drawdown from its peak.