Blockchain analytics service Nansen has published its NFT Indexes Report for the second quarter of 2022, showing the market dynamics and quantitative performance of nonfungible tokens (NFTs) over the last three months.

The report identifies and determines key factors contributing to the well-documented NFT bear market, including Ethereum-based volume and transactional metrics, as well as market capitalization, among others.

Commencing with an analysis of NFT volume statistics on Ethereum measured per week across a monthly time frame, the report found that June recorded the lowest figure of the calendar year.

Calculated across six marketplaces — OpenSea, LooksRare, Mints, X2Y2, 0x, and CryptoPunks — the NFT space, at least on an economic level, experienced a considerable depreciation throughout June to close to approximately 600,000 Ether (ETH) in trading per week.

In stark comparison, the previous month of May recorded around 1.3 million in weekly ETH volume, circa 900,000 of which occurred on OpenSea alone.

Despite this short-mid term deflationary environment, beacons of long-term optimism and assurances as to the long-term demand of the space flicker when looking at the charts of returning monthly users, and first-time buyers.

The former has encountered sizeable fluctuations since the turn of the year, from 55,000 returning monthly users in February to 35,000 in May, before rising once again to around 48,000 in June.

First-time buyers on the other hand have remained relatively consistent at the 5,000 user mark since March this year, suggesting that the appetite for NFTs on Ethereum as a speculative mechanism, and medium of entertainment, has sustained a modest appeal.

This long-term bullish thesis is corroborated by the monthly user count, which remains at the 650,000 level albeit a small decrease from last month’s 700,000.

Assessing indexes across the breadth of the NFT space, the report stated that all «recorded a bounce in June (when measured in ETH), except for Gaming NFTs at the end of Q2 2022.»

Blue Chip-10, Social-100, and Metaverse-20 were the highest performance NFT ETH indexes across the month of June, with the latter making the most notable strides to reach in excess of 1,000 on the index scoring system.

Upon witnessing this slight uptick in index performance across June, Nansen stated, “NFTs’ trend reversal started earlier than the broad cryptocurrency market,» before noting that a «risk-off sentiment is still highly evident in the NFT market and the limited liquidity […] hints that this uptrend might not sustain.” 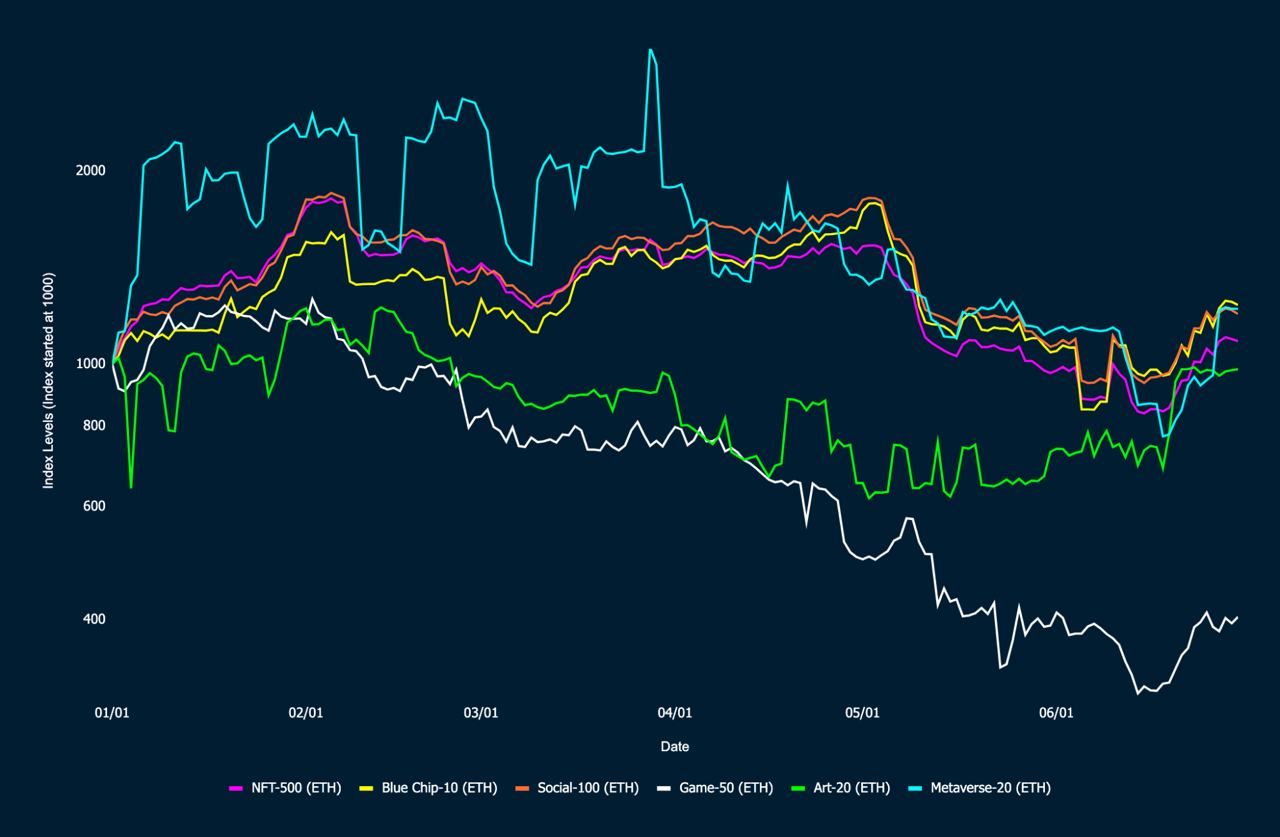