Celsius’ bankruptcy filing has revealed some unpleasant surprises about the state of the crypto lending platform, including a $1.2 billion deficit formed largely as a result of user deposits.

A chapter 11 bankruptcy document signed off by Celsius CEO Alex Mashinsky on July 14 has revealed that the company holds around $4.3 billion in assets against $5.5 billion in liabilities, representing a $1.2 billion deficit.

User deposits made up the majority of liabilities at $4.72 billion, while Celsius’ assets include CEL tokens as assets valued at $600 million, mining assets worth $720 million, and $1.75 billion in crypto assets.

The value of the CEL tokens has drawn suspicion from some in the crypto community however, as the entire market cap for CEL tokes is only $321 million, according to CoinGecko data. 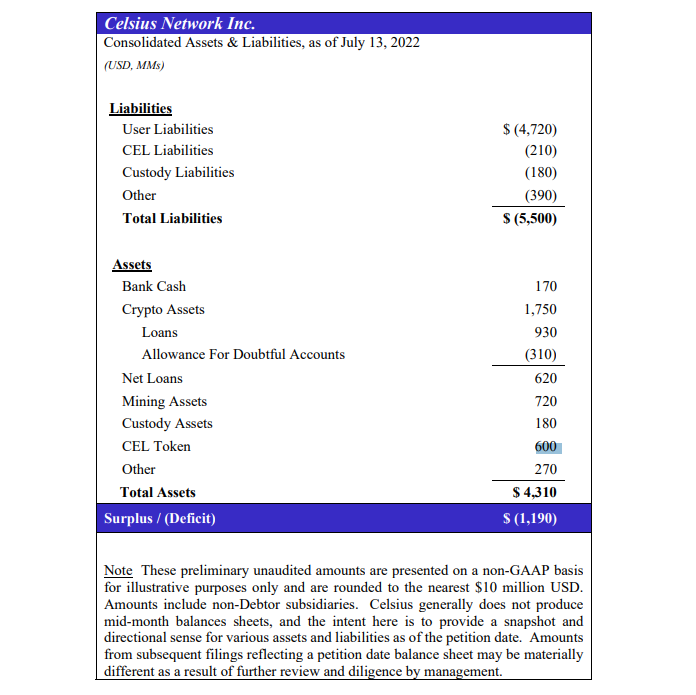 The financial roundup for Celsius reveals a $1.2 billion deficit.

Among the crypto assets are 410,421 Lido Staked ETH (stETH) tokens worth about $479 million which are generating 5% APY, though the tokens themselves cannot be redeemed for Ether (ETH) until the Ethereum network transitions into Proof-of-Stake consensus in the Merge.

Celsius CEO Alex Mashinsky signed a document stating that the company could also sell Bitcoin (BTC) mined by its Celsius Mining Bitcoin mining operation to “generate sufficient assets” to repay at least one of its loans and provide revenue for the company in the future. The company projects that it could generate about 15,000 BTC through 2023.

Swan Bitcoin founder Cory Klippstein has deplored both Celsius and Voyager’s recent decision to file for Chapter 11 protection rather than the Securities Investor Protection Act (SIPA).

In a July 14 tweet, Klippstein said filing under SIPA would have shifted ownership of the firm’s assets over to customers, which would have at least given them a portion of their deposits back.

Under Chapter 11 bankruptcy proceedings, the company filing for protection claims ownership of all assets. Under SIPA, a failed firm must either transfer its accounts to another firm or be liquidated and send funds to investors.

If @celsiusnetwork and @investvoyager cared about their users they’d file for SIPA bankruptcy as brokers (which they always claimed to be), where ALL proceeds go to customers first.

Filing for Chapter 11 is them saying EXPLICITLY that THE COMPANY OWNS ALL USER ASSETS. pic.twitter.com/FMDzmjRBZO

Crypto skeptic economist and blogger Frances Coppola shared more potential bad news in a July 14 blog post by explaining why she believes Celsius depositors “won’t get their money back.”

She argues that Celsius is running what she calls a “shadow bank,” which is defined by Investopedia as a non-bank “unregulated financial intermediary.”

“Deposits in banks aren’t even ‘customer assets,’ let alone ‘assets under management.’ They are unsecured loans to the bank. They are thus liabilities of the bank and fully at risk in bankruptcy.”

“Depositors in a bank do not have any legal right to return of their funds. Even if the terms of the account say funds can be withdrawn whenever the customer chooses, the bank can refuse to allow customers to withdraw their funds if it doesn’t have the cash to pay them,” she explained.

Despite assertions in its terms of use that it is not a bank, Celsius’s business model is that of an unlicensed, unregulated bank with no deposit insurance — a «shadow bank».

Coppola also added that Celsius’s terms of use make it clear that Celsius are allowed “to do with as it pleases” with funds deposited by customers.

“And it specifically says that in the event of bankruptcy, customers might not get all — or indeed any — of their money back.”

CEL has been falling since January, dropping 84% from $4.38 to $0.73, with a spike in June coinciding with a short squeeze attempt by the community.

34% of gamers want to use crypto in the Metaverse, despite the backlash