The price of Aave (AAVE) has more than doubled in a month, but its bullish momentum could be reaching a point of exhaustion.

Notably, AAVE has surged by over 103% after bottoming out locally at $45.60 on June 18, hitting almost $95.50 this July 15. Nevertheless, the token’s sharp upside retracement move has brought its price closer to the level that triggered equally sharp pullbacks since early June.

In other words, AAVE has been testing an ascending trendline resistance that constitutes a «bear flag,» a bearish continuation pattern. For example, the trendline’s previous test on July 9 ended up in a 20% downside move. Similarly, a similar attempt on June 24 pushed AAVE price lower by nearly 30%. 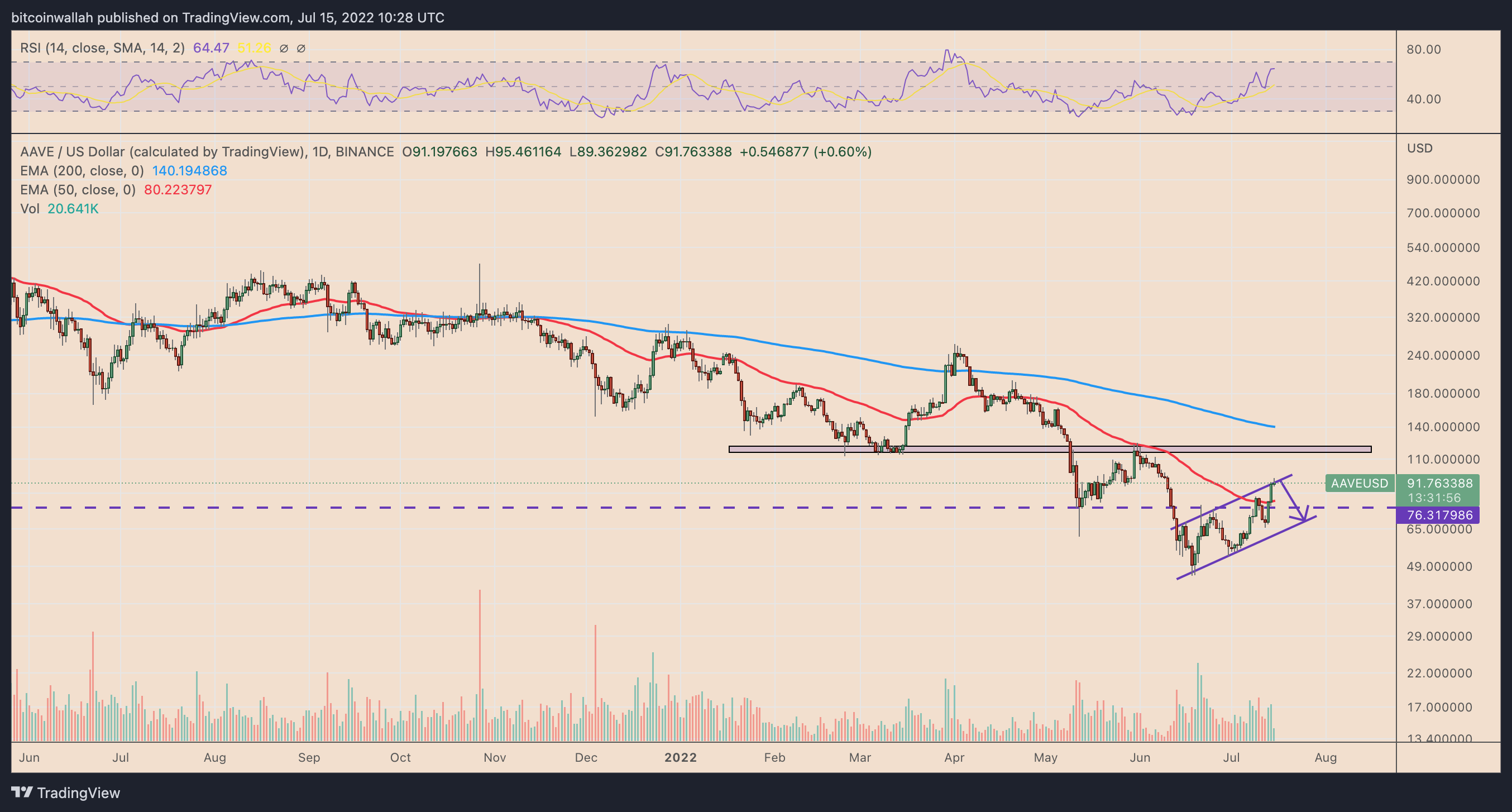 As a result of this distribution behavior, AAVE’s ongoing attempt to break above the flag trendline could meet with extreme selling pressure. A pullback could then see AAVE/USD retest the flag’s lower trendline near $67.75 as its downside target by September, down almost 30% from today’s price.

Meanwhile, the $76.30-level serves as interim support, primarily due to its history as a price floor in May that preceded a 60% rebound move.

As a rule of technical analysis, the breakdown below $67.75 could see AAVE plunging by as much as the height of the «flagpole» that formed before the bear flag. That would have the token eye $35.50 as its bear flag profit target, down over 60% from the current price.

Conversely, a continued rebound move above the bear flag’s upper trendline would invalidate the breakdown setup. In this case, the bullish target for AAVE will likely be the $115-$120 range that served as resistance in June.

More than half of the gains during Aave’s price rally have come after its proposal to launch a U.S. dollar-pegged stablecoin called GHO.

We have created an ARC for a new decentralized, collateral-backed stablecoin, native to the Aave ecosystem, known as GHO.

Read more below and discuss your thoughts for the snapshot (coming soon)!https://t.co/P7tHl9LbBe

Related: UNI, MATIC and AAVE surge after Bitcoin price bounces back above $20K

On July 7, Aave Companies, a centralized entity that backs Aave’s lending protocol, requested its community to vote on their «overcollateralized» stablecoin proposal. AAVE’s price surged by over 53% afterward, led by speculations that GHO would boost the DeFi token’s adoption.

However, any further gains would risk pushing AAVE into «overbought» territory with its daily relative strength index (RSI) treading just five points below 70 as of July 15

Rising above the 70 threshold could push AAVE’s price into a correction phase, likely triggering the bear flag scenario as discussed above.

You can transform the world with blockchain: Dr. Jane Thomason