Understanding what women want from a Metaverse platform

While these initiatives are notable, new findings from The Female Quotient (The FQ) and the media company EWG Unlimited show that metaverse experiences are still largely geared toward men. The report titled “What Women Want in Web 3.0” also found that 62% of women surveyed have never heard of or are unfamiliar with NFTs, while 24% of females don’t understand the Metaverse. 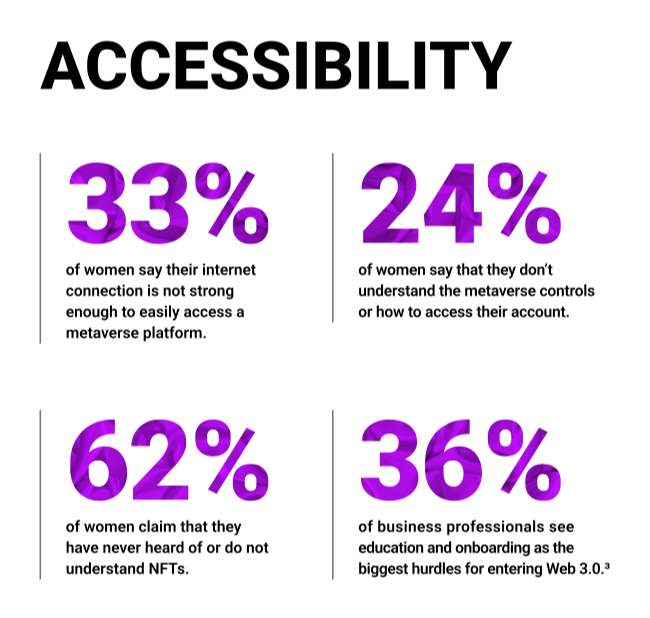 Findings from «What Women Want in Web 3.0» report

Shelley Zalis, CEO of The FQ — an equality services and advisory firm — told Cointelegraph that while there is a tremendous interest for women to become involved in Web3, the experiences offered by brands need to cater more toward what women want. She said:

“We know that 85% of purchase decisions are made by women, so if brands want to get this right they need to design experiences that are relevant for women by creating the types of experiences they want to participate in. For example, from a visualization perspective many metaverse visuals are clunky and not beautiful, so this needs to be improved.”

To Zalis’ point, The FQ and EWG Unlimited report found that one in four women would revisit a Metaverse platform if it contained better aesthetics. Yet, understanding visually appealing elements for women may be challenging, as the report notes that only 16% of Web3 creators currently identify as women. “The FQ wants to set the stage by encouraging more women to be on the business side of Web3 initiatives. If women can design these spaces for women then we can ensure that females will want to spend more time in the Metaverse,” Zalis explained.

Echoing this, Sam Huber, founder and chief operating officer at metaverse provider LandVault, told Cointelegraph that from the perspective of metaverse builders, change starts from within. “Female developers are best placed to know what appeals to a female audience, so diversifying developer talent is key,” he said. This appears to be the case, as women-led Metaverse platforms like DressX have witnessed increased involvement of women over time.

Natalia Modenova, founder of DressX, told Cointelegraph that the digital fashion platform has been promoting creativity since day one, noting that the first designers on the platform were women.

Recent: Borrowing to buy Bitcoin: Is it ever worth the risk?

“Female creators are dominating the DressX platform,” she said. Modenova added that DressX has launched numerous projects created and executed by women. “One of the most notable being our ‘Feminine Future’ NFT drop created by the innovative creative director, VFX artist and virtual fashion designer Katie McIntyre and multimedia artist Nina Hawkins recently named ‘the world’s leading female VFX artists’ by Time magazine,” she said. According to Mondenova, the project provided a glimpse as to how women can collaborate and create their own aesthetics within the Metaverse. 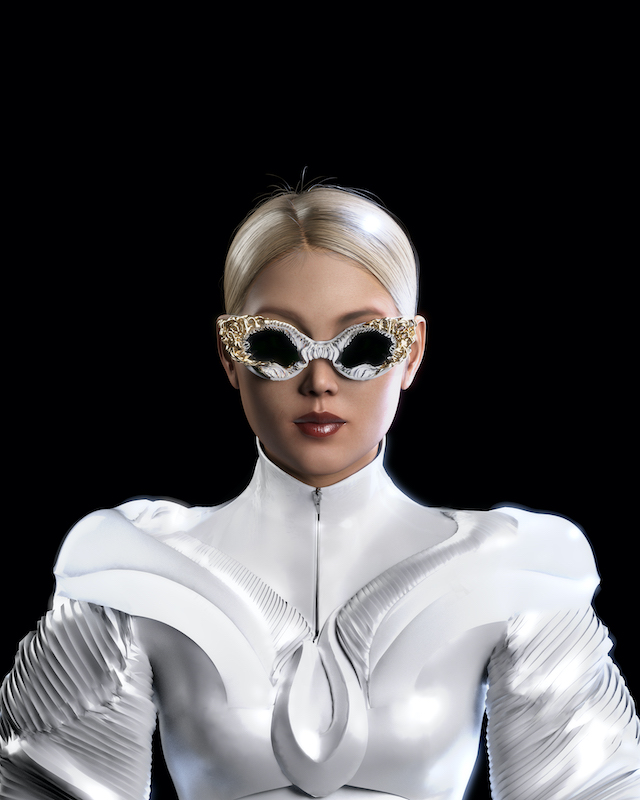 From a brand’s perspective, a spokesperson from the luxury fashion industry told Cointelegraph that aesthetics should be the number one priority when it comes to marketing in the Metaverse. “The aesthetics should be cohesive to the brand, replicating elements such as color schemes and patterns,” she said.

Even with visually appealing aesthetics, she pointed out that women’s engagement in the Metaverse remains low, noting that many luxury fashion consumers still don’t understand what Web3 means. “People need to understand this space before we can engage. We also have an older clientele at our store, which won’t easily be pulled into the digital world.”Although the “What Women Want in Web 3.0” report found there to be a 15% increase in interest from women in the Metaverse month-over-month, findings indicate that only 30% of women are truly familiar with virtual worlds. In order to combat these challenges, the report emphasizes that brands must focus on accessibility and education when it comes to attracting women consumers.

“Only 14% of women have access to Metaverse platforms like Decentraland or Roblox. Education will reign supreme in order to get everyone on board,” Zalis remarked. Specifically speaking, she explained that The FQ has found social media to be one of the most helpful tools for educating women on Web3. “Women require social interaction and community building. Social media is the best way for brands to engage with consumers of all ages.”

Jenny Guo, co-founder of Highstreet — a retail-focused metaverse platform — further told Cointelegraph that individuals who are well-versed in Web3 often use rhetoric that is not easily understood by the mainstream. As such, she believes that traditional consumers do not typically understand how these ecosystems work, resulting in brands hesitating to enter the space. “With more education, easier access, and a brand’s willingness to experiment within the metaverse, we will see more brands, especially boutique brands, expanding their market to the Web3 world,” she said.

In the meantime, Guo pointed out that Web3 initiatives being taken by brands today may still appeal mainly to male consumers. For example, Guo noted that Tiffany’s recent collaboration with CryptoPunks is a great example of how companies are leaning into female focused-labels. Yet, she remarked that most CryptoPunk holders are male. She said:

“By default, Web3 is very much dominated by men, and we do not see many female-focused brands getting into the space right now. But, similar to the tech industry, more and more women creatives will join the industry with time.”

Although findings show that metaverse experiences are largely geared toward men, the tables are bound to turn as more brands become involved in the sector. Brian Trunzo, metaverse lead at Polygon Studios – the platform catering to Web3 projects built on the Polygon protocol – told Cointelegraph that the Metaverse is becoming a new hub for expanding product and service offerings. He said:

“Brands can now engage with their consumers in a more direct way that doesn’t involve travel to physical locations or staff to man operations. Consumers can simply access digital hubs for their favorite brands and partake in their unique metaverse experiences or purchase what they have to offer.”

According to Trunzo, this level of engagement would never be possible in the real world or within Web2 platforms, which is why it is now becoming critical for brands to migrate to Web3. Given this, Trunzo pointed out that combining representation and inclusivity with aesthetics could be the key to drawing more women into the Metaverse. “This could also allow them to partake in this ecosystem without accessibility barriers,” he said.

Recent: Beyond the headlines: The real adoption of Bitcoin salaries

Given this, Zalis believes that now is the time for women to become involved with building out Metaverse platforms. “We want to make sure women are first in Web3 before it becomes an all boys club. Women need to get in early in order to write the rules of the road, not only as creators but also as business leaders.”

In order to ensure this, Zalis shared that The FQ hosts a number of in-person events along with meetings in the Metaverse to help educate women on Web3 through social interaction and community building. “We connect with women in over 100 countries,” she said. Shapovalova said that DressX will be hosting a number of events and launches, partnering with renowned traditional brands to create in-house 3D fashion collections. “We are exploring the Metaverse through all the possible (and impossible) directions,” she remarked.