An ascending triangle formation has driven the total crypto market capitalization toward the $1.2 trillion level. The issue with this 7-week-long setup is the diminishing volatility, which could last until late August. From there, the pattern can break either way, but Tether and futures markets data show bulls lacking enough conviction to catalyze an upside break. 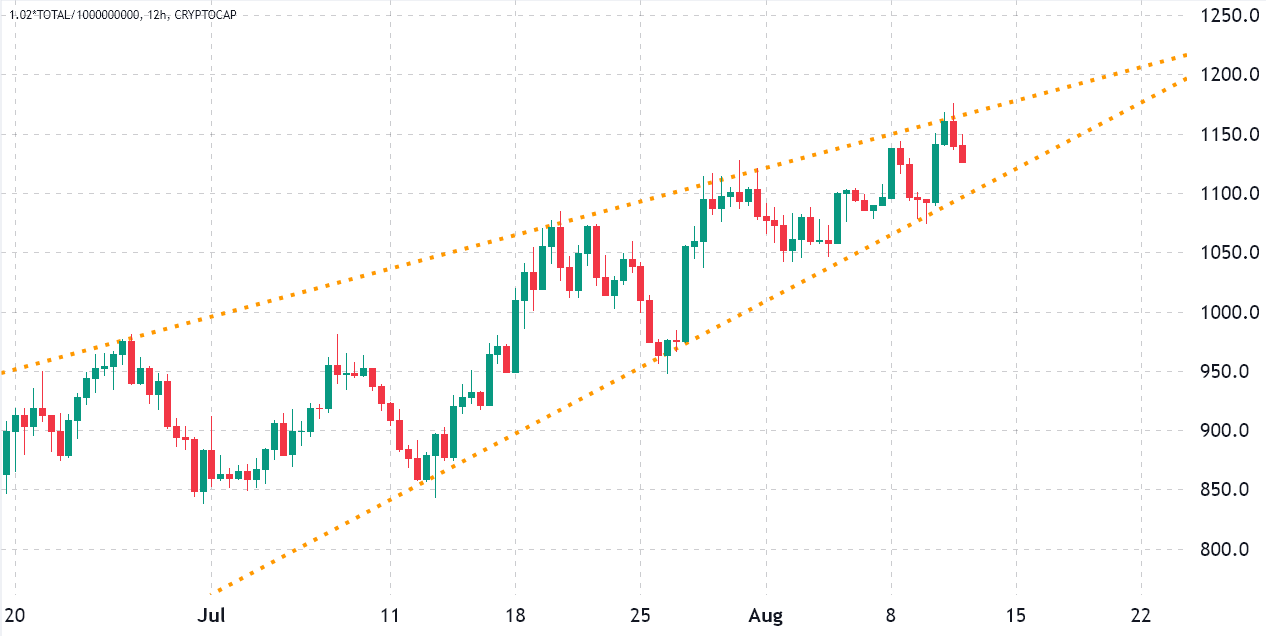 Investors cautiously await further macroeconomic data on the state of the economy as the United States Federal Reserve (FED) raises interest rates and places its asset purchase program on hold. On Aug. 12, the United Kingdom posted a gross domestic product (GDP) contraction of 0.1% year-over-year. Meanwhile, inflation in the UK reached 9.4% in July, the highest figure seen in 40 years.

The Chinese property market has caused the Fitch Ratings credit agency to issue a “special report” on Aug. 7 to quantify the impact of prolonged distress on a potentially weaker economy in China. Analysts expect asset management and smaller construction and steel-producing companies to suffer the most.

In short, risk asset investors are anxiously waiting for the Federal Reserve and Central Banks across the world to signal that the policy of tightening is coming to an end. On the other hand, expansionary policies are more favorable for scarce assets, including cryptocurrencies.

Sentiment improves to neutral after 4 months

The risk-off attitude caused by increased interest rates has instilled a bearish sentiment into cryptocurrency investors since mid-April. As a result, traders have been unwilling to allocate to volatile assets and sought shelter in U.S. Treasuries, even though their returns do not compensate for inflation.

The Fear and Greed Index hit 6/100 on June 19, near the lowest ever reading for this data-driven sentiment gauge. However, investors moved away from the “extreme fear” reading during August as the indicator held a 30/100 level. On Aug. 11, the metric finally entered a “neutral” area after a 4-month-long bearish trend.

Below are the winners and losers from the past seven days as the total crypto capitalization increased 2.8% to $1.13 trillion. While Bitcoin (BTC) presented a mere 2% gain, a handful of mid-capitalization altcoins jumped 13% or more in the period. 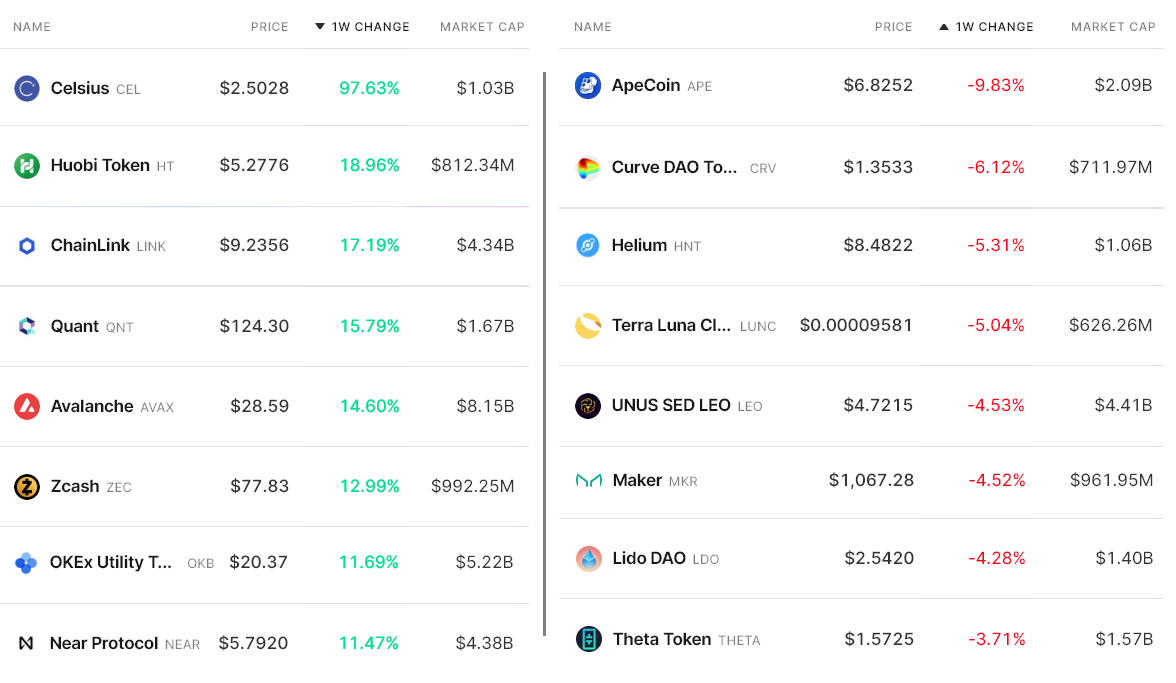 Weekly winners and losers among the top-80 coins. Source: Nomics

Celsius (CEL) jumped 97.6% after Reuters reported that Ripple Labs displayed interest in acquiring Celsius Network and its assets which are currently under bankruptcy.

Chainlink (LINK) rallied 17% after announcing on Aug. 8 that it would no longer support the upcoming Ethereum proof-of-work (PoW) forks that occur during the Merge.

Avalanche (AVAX) gained 14.6% after being listed for trading on Robinhood on Aug. 8.

Curve DAO (CRV) lost 6% after the nameserver for the Curve.Fi website was compromised on Aug 9. The team quickly addressed the problem, but the front-end hack caused some of its users’ losses.

Market may have rallied, but retail traders are neutral

The OKX Tether (USDT) premium is a good gauge of China-based retail crypto trader demand. It measures the difference between China-based peer-to-peer (P2P) trades and the United States dollar.

Excessive buying demand tends to pressure the indicator above fair value at 100% and during bearish markets Tether’s market offer is flooded and causes a 4% or higher discount.

To exclude externalities specific to the Tether instrument, traders must also analyze futures markets. Perpetual contracts, also known as inverse swaps, have an embedded rate that is usually charged every eight hours. Exchanges use this fee to avoid exchange risk imbalances. 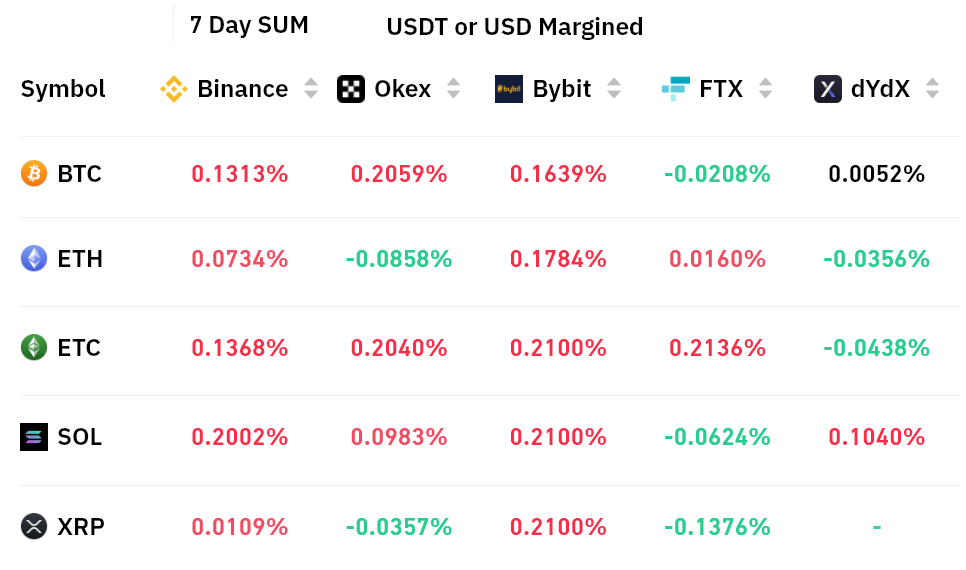 Perpetual contracts reflected a neutral sentiment after Bitcoin and Ether held a slightly positive (bullish) funding rate. The current fees imposed on bulls are not concerning and resulted in a balanced situation between leveraged longs and shorts.

According to derivatives and trading indicators, investors are less inclined to increase their positions at current levels, as shown by the Tether discount in Asia and the absence of a positive funding rate in futures markets.

These neutral-to-bearish market indicators are worrisome, given that total crypto capitalization has been in a 7-week uptrend. Investors’ distress over Chinese property markets and further FED tightening movements is the most likely explanation.

For now, the odds of the ascending triangle breaking above the projected $1.25 trillion mark seem low, but further macroeconomic data is needed to estimate the direction central banks might take.