Warren Buffett has put most of Berkshire Hathaway’s cash in short-term U.S. Treasury bills now that they offer as much as 3.27% in yields. But while the news does not concern Bitcoin (BTC) directly, it may still be a clue to the downside potential for BTC price in the near term.

Treasury bills, or T-Bills, are U.S. government-backed securities that mature in less than a year. Investors prefer them over money-market funds and certificates of deposits (COD) because of their tax benefits.

The move is likely a response to bond yields jumping massively since August 2021 in the wake of the Federal Reserve’s hawkish policies aimed at curbing inflation, which was running at 8.4% in July.

For instance, the three-month U.S. T-bill returned a 2.8% yield on Aug. 22 compared to a near-zero yield a year ago. Similarly, the yield on U.S. one-year T-bill climbe from zero to 3.35% in the same period.

Meanwhile, non-yielding assets like gold and Bitcoin have dropped roughly by 2.5% and 57% since August 2021. The U.S. stock market benchmark S&P 500 likewise saw a decline, losing nearly 7.5% in the same period.

Related: BTC to lose $21K despite miners’ capitulation exit? 5 things to know in Bitcoin this week

Such a difference in performance presents T-bills as an ultra-safe alternative for investors when compared to gold, Bitcoin and stocks. Buffett’s T-bill strategy suggests the same, namely a bet on more downside for risk-on assets in the near term — particularly as the Fed gears up for more rate hikes.

«Buffett is a value investor, so he won’t allocate much when the equity markets are as overvalued as they have been for the last five years,» said Charles Edwards, founder of quantitative crypto fund Capriole Investments.

«Individual investors may want to consider following Buffett’s lead now that they are yielding as much as 3%.»

Positive-yielding debts risk are dampening the demand for other potential safe-havens, Bitcoin included. In other words, increasingly risk-averse investors could be opting for assets that offer fixed yields over those that don’t.

The performance of Bitcoin-focused investment funds in August supports this argument with capital outflows for three weeks in a row, including a $15.3 million exit in the week ending Aug. 19.

Overall, these funds have lost $44.7 million on a month-to-date basis, according to CoinShares’ weekly report. In total, digital asset investment products, including BTC, have witnessed month-to-dat outflows totaling $22.2 million. 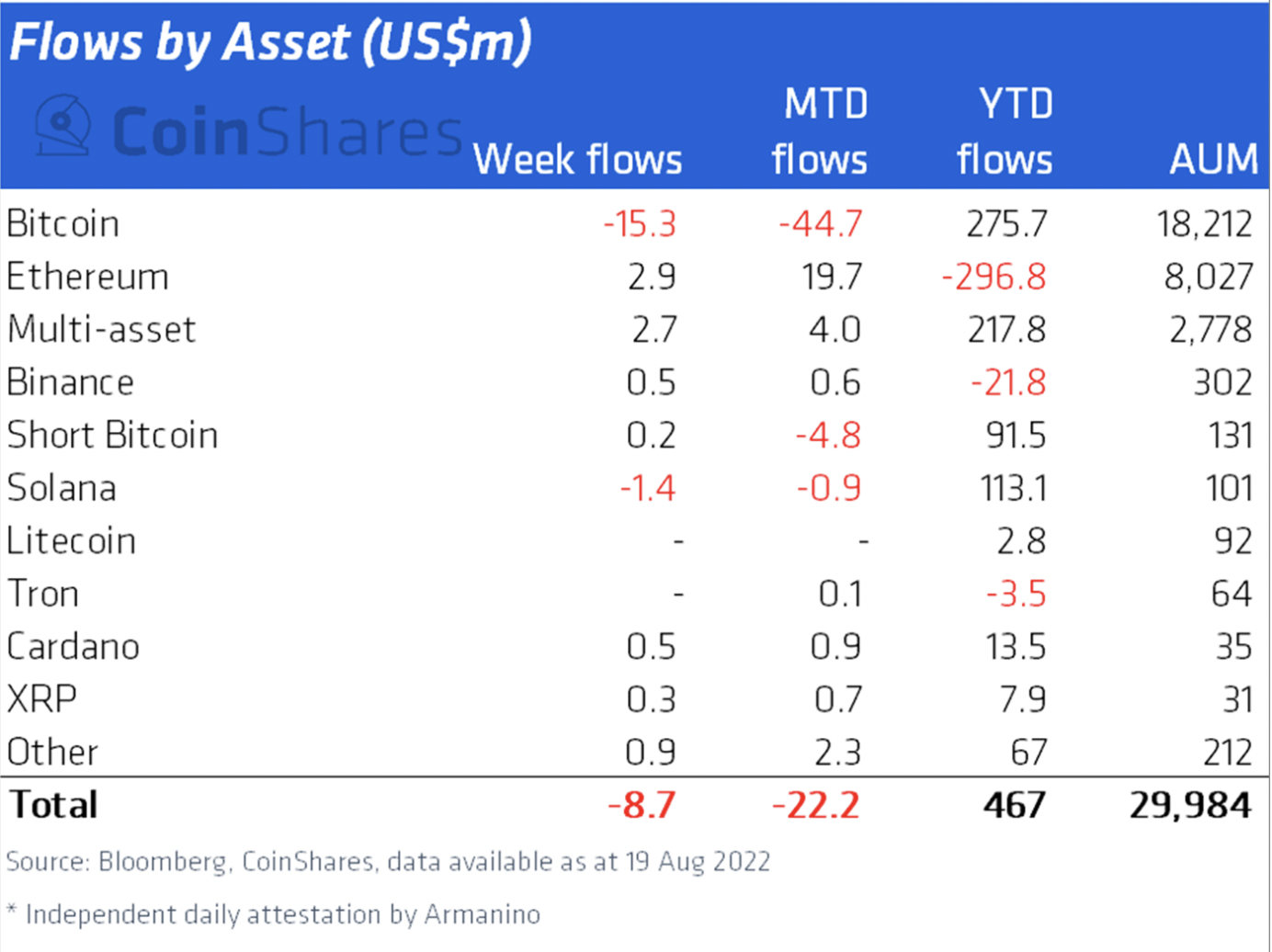 Does that mean Bitcoin will continue to lose its sheen against positive-yielding U.S. government debts? Edwards does not agree.

«Allocation to treasuries and other low-yield cash products is really a decision that needs to be made case-by-case depending on an individual’s goals and risk appetite,» he explained, adding:

«In the short-term, there are times it makes sense to hedge against Bitcoins volatility with cash, the best cash being the US Dollar. But, in the long-term, I think all fiat currencies tend towards zero against Bitcoin.

Edwards also points out that Buffett’s long-term strategy remains largely risk-on. Notably, Berkshire deployed 34% of its cash holdings to buy equities in May and that over 70% of its portfolio is still made up of risk-on assets.

«Looking at Buffett’s 75% risk allocation; and knowing that Bitcoin has been the best performing asset of all asset classes in the last decade, having the highest risk-adjusted returns, I know where I would be putting my money,» he add.

Buffett’s portfolio, however, will likely continue to eschew direct BTC investment as the «oracle of Omaha» remains a fierce critic. In February 2020, he said that it «does not create anything,» adding:

“I don’t own any cryptocurrency. I never will… You can’t do anything with it except sell it to somebody else.”

Earlier this year, however, Buffett’s Berkshire Hathaway increased exposure in a Bitcoin-friendly neobank while reducing its stake in Visa and Mastercard.