Glassnode: Bitcoin Demand Is Slowly Coming Back After Months Of Decline

Data from Glassnode shows demand on the Bitcoin network has been gradually recovering recently, after facing months of continuous decline.

According to the latest weekly report from Glassnode, the BTC network has been observing a small, but sustained surge in activity recently.

The “Mempool” is a (virtual) place where Bitcoin transactions that are yet to be confirmed stand still, waiting to be processed by the miners.

When the Mempool has a large size, it means there are many pending transactions on the network right now. This can hint that the chain is viewing high activity currently.

An indicator from Glassnode is the “Mempool total amount of coins,” which measures how much BTC is inside the Mempool at the moment.

Rises in this metric can suggest there are larger transactions and/or a higher number of them taking place on the Bitcoin blockchain currently.

Now, here is a chart that shows the trend in the BTC Mempool total amount of coins over the last twelve months: 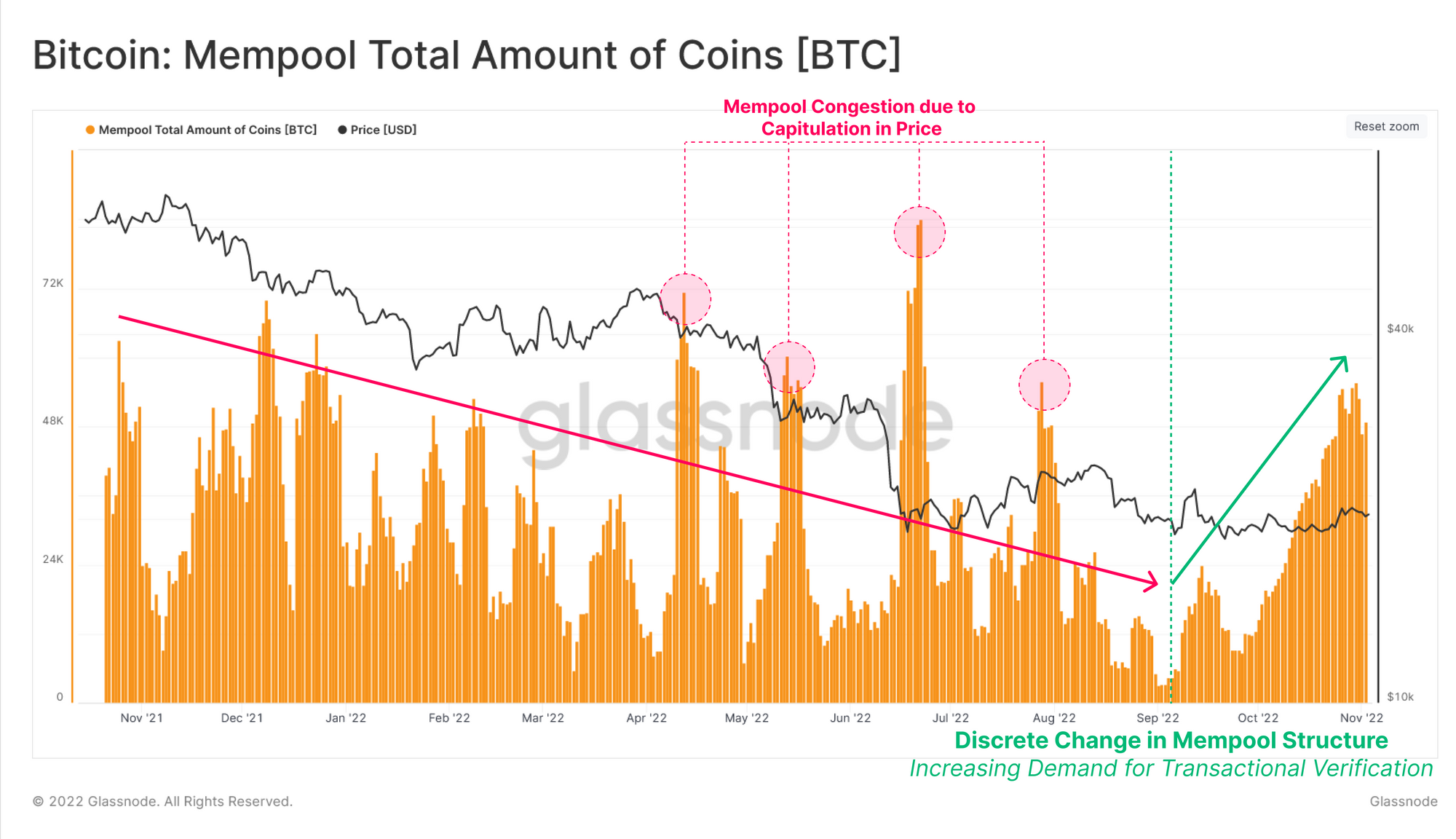 Looks like the value of the metric has been on the up in recent days | Source: Glassnode’s The Week Onchain — Week 45, 2022

As you can see in the above graph, the total amount of coins in the Bitcoin Mempool were on a constant decline during most of the last year.

This means that as the bear market took hold, activity on the chain started dropping off as a lesser and lesser number of investors became interested in trading the crypto.

There were still a few spikes out of the ordinary in this period of decline, where the Mempool became congested. These bursts coincided with the major capitulations in the price. Nonetheless, these were only temporary uplifts, and the metric fell back to the norm in no time.

The trend has, however, changed in the last month or so. During this period, the indicator has seen a sustained uptrend, implying that a higher total amount of coins are being shifted on the chain now.

Glassnode notes that this could be an initial sign that a potentially constructive shift in the demand for Bitcoin is taking place currently.

And if it is so, this trend could prove to be positive for the price of the crypto in the long term, as a high demand is key to driving the market up.

At the time of writing, Bitcoin’s price floats around $19.7k, down 4% in the last week.

BTC has plunged down over the past day | Source: BTCUSD on TradingView
Featured image from Kanchanara on Unsplash.com, charts from TradingView.com, Glassnode.com

Rocketize Heads for Web3 With Redesigned Website and Upcoming Giveaway