ETH Attempts a Recovery But is Another Drop to $1,000 In Play? (Ethereum Price Analysis) 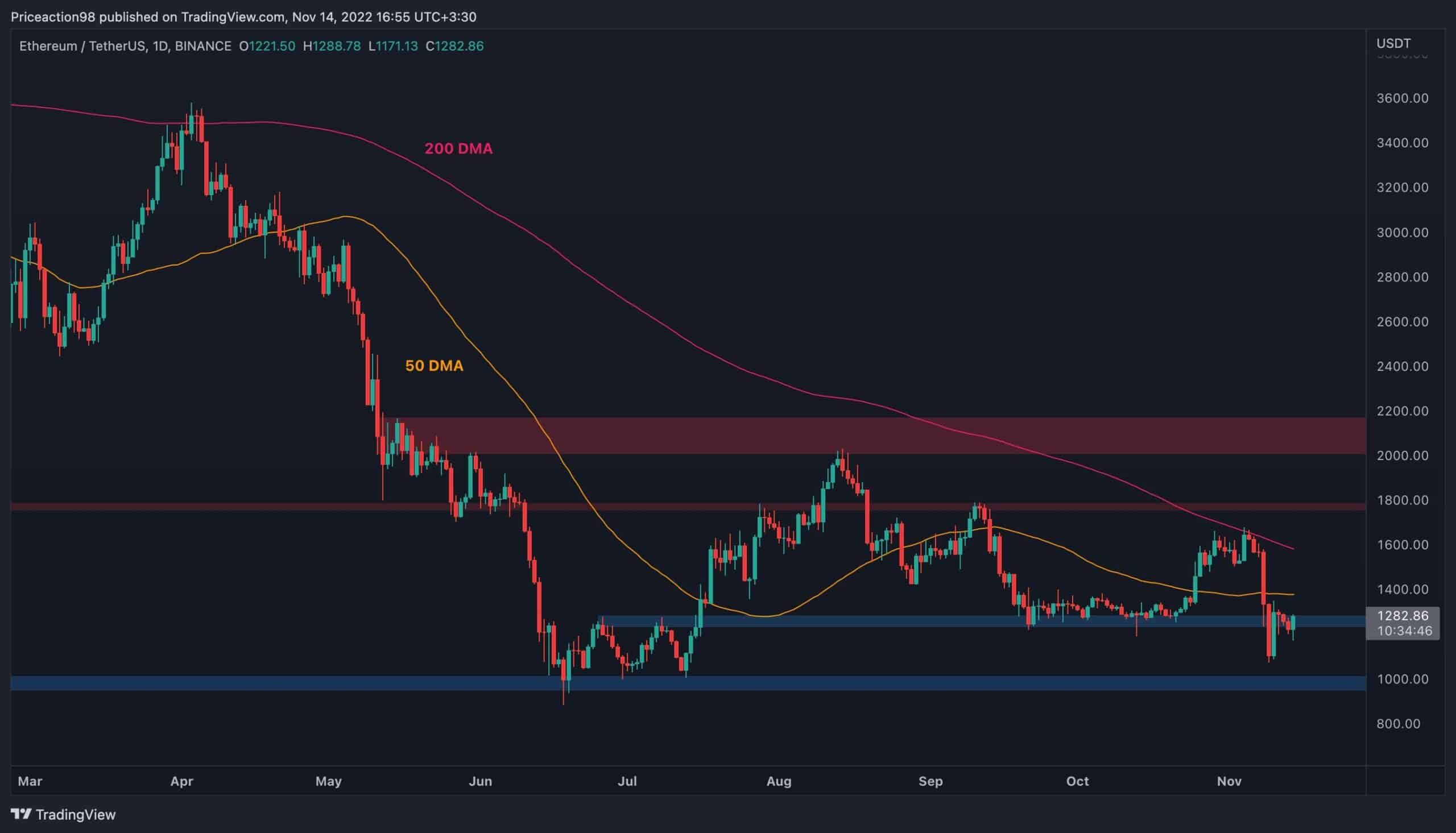 Ethereum is showing signs of recovery after the recent crypto market crash. However, it may be too soon to call for a bottom, as the price is facing significant resistance levels, which need to get broken before expecting any bullish scenarios.

On the daily chart, the price’s free fall has come to a halt. ETH is currently trying to reclaim the $1250 support area, which was impulsively broken to the downside last week.

However, the market structure cannot be considered bullish until a breakout above the $2000 static resistance level.

So, a bearish continuation towards the $1000 level and even a potential break below it still remains the more likely scenario, as the price could be rejected by any of the above-mentioned resistance levels in a bearish environment.

On the 4-hour timeframe, the price has seemingly formed a new support level at the recent low, around the $1100 mark, and is on its way toward the $1350 resistance level. A breakout from the bullish flag pattern demonstrated on the chart is also confirming a probable bullish move in the short term.

A break above the $1350 level would likely result in a rally toward the $1600 resistance area. On the other hand, a bearish rejection would cause a retest of the $1100 support level, which may not be able to hold for long. As a result, it would likely make way for a drop toward the key $1000 area.

The RSI indicator has also recovered from deep oversold values and is even indicating a slight shift in favor of the bulls, as it is trending above the 50% equilibrium level. However, considering the higher timeframe market structure, bearish scenarios are still more likely to play out.

Following the recent crash led by FTX’s issues and bankruptcy, the crypto market has witnessed massive liquidations in the derivative market.

The perpetual futures market has been playing a significant role in determining the short-term and mid-term price action for most crypto assets since the beginning of this cycle. So, analyzing the trading volume and the sentiment of futures traders usually offers key insights.

One of the most useful metrics for futures market sentiment analysis is the open interest (OI), which measures the number of open short and long positions on a daily basis. An increase in this metric would typically cause a rise in volatility, and on the other hand, a decrease in Open Interest would lead to more stable price action.

Prior to the recent market crash, Ethereum’s Open interest had constantly been rising, as many traders began opening long positions believing that the bottom was in. Many others were shorting ETH to hedge their spot portfolios against a potential decline.

Last week’s crash led to an immense liquidation cascade, further increasing the volatility and aggravation. These liquidations have been demonstrated by a sharp drop in the open interest.

As a result, less volatility caused by the futures market could be expected in the short-term future. However, the price could still drop further because of a potential increase in the spot selling pressure.

The post ETH Attempts a Recovery But is Another Drop to $1,000 In Play? (Ethereum Price Analysis) appeared first on CryptoPotato.