Now, all applicants have until November 18 to file their amicus briefs. With Coinbase, the first supporter of Ripple has already filed its brief. In it, the U.S. exchange argues that the SEC has failed to provide adequate guidance to the crypto industry.

In addition, Coinbase argues that the fair notice defense is not valid in the absence of clear rules for the crypto market.

Therefore, the lack of notice-and-comment rulemaking should be heavily weighed by courts considering a fair notice defense, especially in cases like this one where the SEC seeks to impose strict liability on conduct that it previously signaled was lawful.

Is The SEC Playing Unfair With Ripple?

InvestReady (Accredify) and the New Sports Economy Institute (“NSEI”), which have spoken in support of the SEC, will also be able to formally file their briefs.

The New Sports Economy Institute (“NSEI”) filed its motion last week. In the brief, NSEI argues that cryptocurrencies such as XRP are “solely speculative instruments; you can trade them, but you cannot invest in them.”

In its argument, NSEI further argues that Ripple interprets the Howey test too broadly and “nitpicking at every turn and misconstruing the true intent.” Moreover, according to NSEI, the XRP price was significantly dependent on Ripple’s efforts.

One of the XRP community’s darling attorneys, Jeremy Hogan referenced via Twitter a thread from attorney Fred Rispoli explaining why the amicus brief may have been filed. “Crazy times, crazy stuff,” Hogan commented.

Rispoli posits that the U.S. agency may have drafted the amicus brief itself. According to the attorney, the NEIS amicus is fishy for several reasons.

First, the company is not involved in the crypto industry at all. “Looking at its history it really only gets involved in cases as amicus when sports gambling issues are at play. So why is it getting involved here?”

The only open case NSEI has with the SEC reached a settlement in September. The only issue that remains to be resolved, he said, is the amount of penalty the company will have to pay to the SEC.

Second, the law firm that filed the amicus is not the same firm that is representing NSEI in its lawsuit with the SEC. Oddly, further:

Amicus counsel’s office is, literally across the street from the SEC. And it appears a number of attorneys there have ties to the SEC.

A third argument that casts NEIS’s amicus brief in a curious light, according to Rispoli, is the fact that the filing actually reads as if it were written by the SEC.

As a final thought, the attorney expresses that this filing may reveals the desperation of the SEC in the end game with Ripple:

Right on page 28 (III, 1st para)–I think this is SEC begging the Court, realizing it is losing, to at least be explicit in limiting its holding to XRP only, and not use general language that could more easily be applied to the wider crypto universe, thus giving the SEC more of its coveted “flexibility” to pursue other projects.

At press time, the XRP price is stuck below the 50-, 100-, and 200-day moving averages after FTX sent the crypto market crashing across the board. 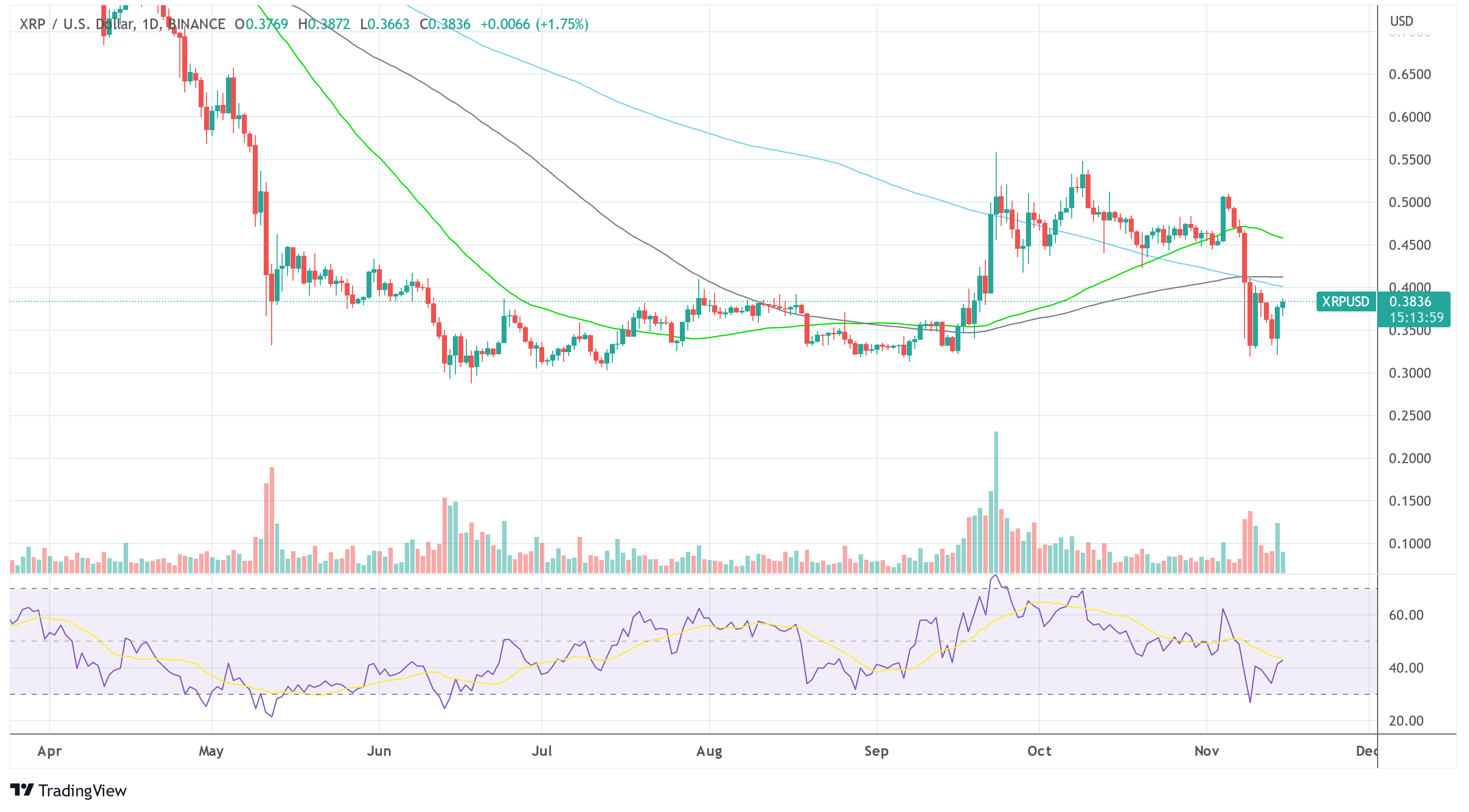 Bitcoin Shows Strength As Price Holds Above $16,500; Is This A Bear Trap?