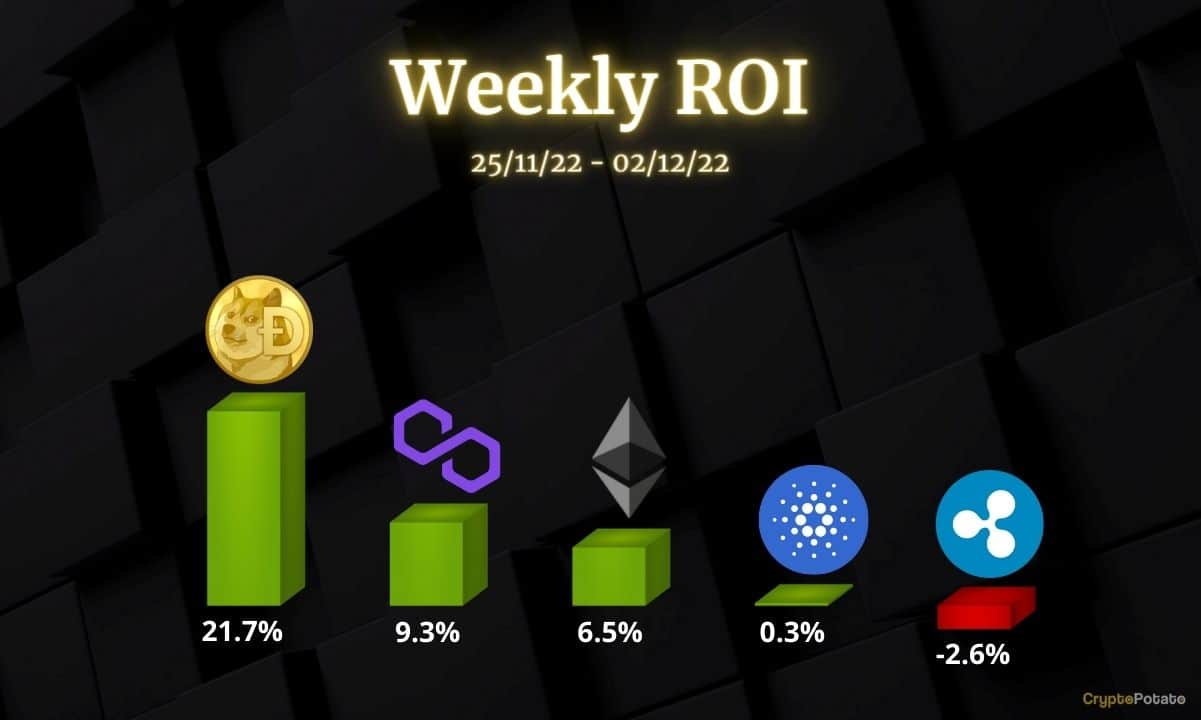 This week, we take a closer look at Ethereum, Ripple, Cardano, Polygon, and Dogecoin.

Ethereum had a good week, with the price managing to break above the $1,220 resistance level and booking a 6.5% increase in the process. This bullish momentum is expected to continue if buyers can manage to turn the previous resistance into support.

The buying volume was good during the breakout, but a retest of $1,220 now seems likely. Should bulls be successful in defending it, Ethereum’s next target is found at $1,365. While the momentum favors buyers at this time, they will face stiff resistance from sellers considering that the market is still overall bearish.

Looking ahead, the best thing that can happen to Ethereum is to reclaim its price level from early November when it was trading around $1,600 (just before the FTX collapse). That would bring back confidence in the market, and bulls may choose to even challenge the $1,725 resistance level.

XRP’s uptrend stalled this week, and the price failed to make a higher high. This is why it lost 2.6%. If this trend continues into the coming weekend, XRP could lose its momentum entirely and fall back towards $0.31, which is acting as support.

The current resistance is found at $0.45, and buyers appear to have lost their strength to even test this level after failing to move above $0.42. The volume is also decreasing, and the daily timeframe indicators are curving down.

Looking ahead, XRP could continue to consolidate just under $0.40 and build momentum for the next significant breakout. Ripple is usually accompanied by sharp volatility in short periods of time, and market participants will need to be patient during this consolidation.

Cardano managed to temporarily stop the downtrend this past week when the price made a higher low. In the process, ADA kept its price at a similar level to seven days ago (or around $0.31). The big question for Cardano holders is if it can break above the resistance at $0.34.

The current buy volume is not encouraging, and ADA is suffering from a lack of interest from market participants. Nevertheless, as long as the price does not make a lower low, this could be a sign that sellers have become exhausted.

The support continues to hold well at $0.30, and it appears unlikely for ADA to retest this level at this time. The more likely scenario seems to be for buyers to attempt a break of the key resistance. Any failure there could embolden sellers to return in force.

Buyers controlled the price action in the past seven days when MATIC registered a 9.3% price increase. This uptrend is expected to continue, but the bulls will face strong resistance at $1, where the price was rejected before in the past.

The current support is found at $0.74, and MATIC has always moved higher from that point in the past few months. This also places MATIC in a large range between $1 and $0.74.

Looking ahead, MATIC may attempt another break of the key resistance at $1, but it will be a tough ask. Sellers always came back at those price levels, and they could return again, which may push the price back below this psychological level.

Dogecoin remains the undisputed leader this week, with a 21.7% increase. After finding strong support at 7 cents, DOGE returned to its uptrend, attracting good volume as the price increased.

However, at the time of this post, the price was rejected at 11 cents which acted as a key resistance. Should buyers fail to return to DOGE soon, then this may turn into a sharp rejection that could push it into a longer correction.

It is too early to say if DOGE will fall back to the critical support, but the price action clearly shows that buyers were eager to take their profit as soon as the price went above 10 cents. This also shows that a sustained rally for DOGE may not be possible at this time.