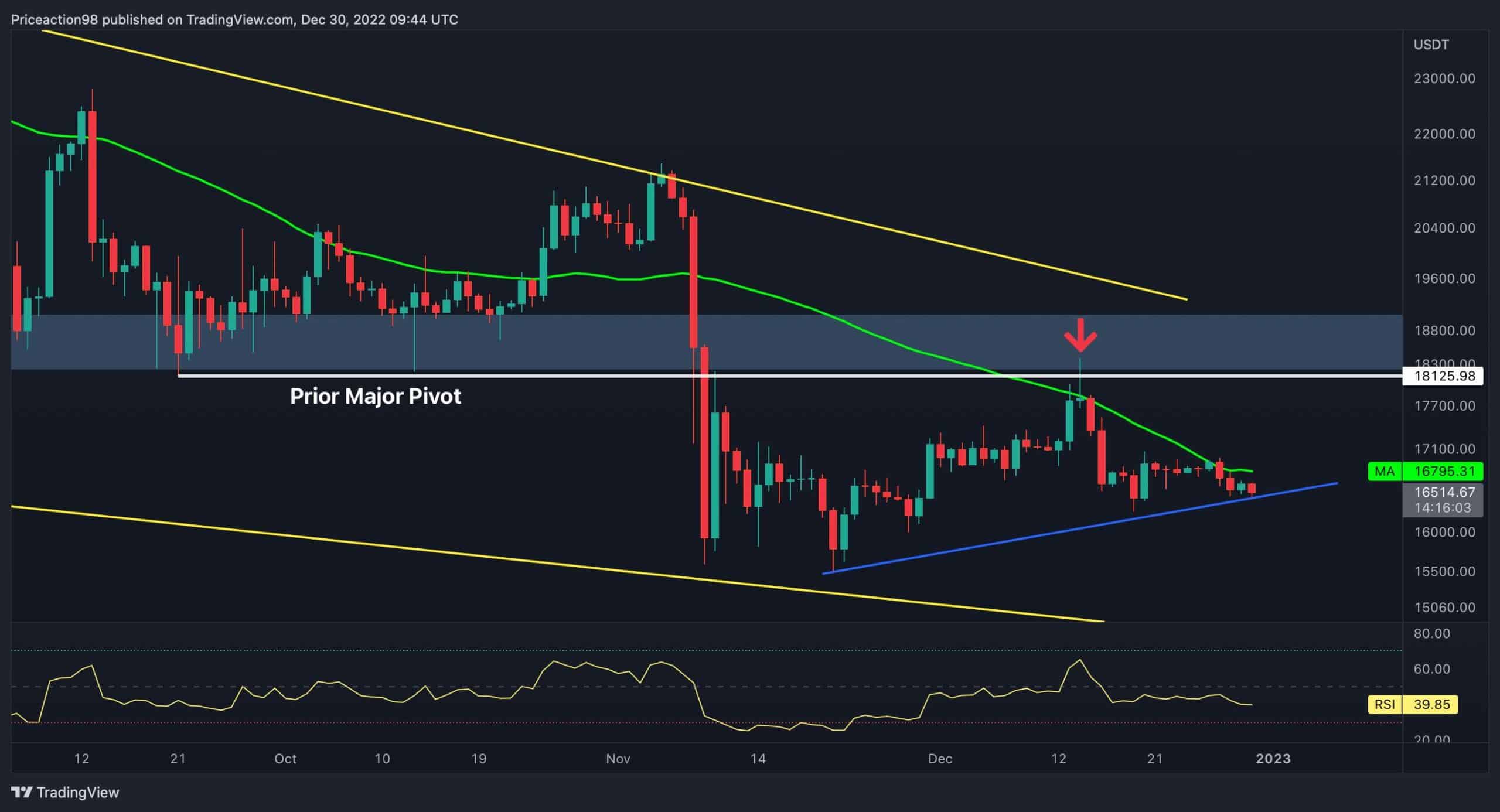 Bitcoin’s price has been confided by a very tight price range between the 50-day moving average and the ascending trendline. Considering the importance of this price range, the breakout’s direction should determine the mid-term perspective of the cryptocurrency’s path.

Bitcoin’s price started recovering after the significant crash toward $15K in mid-November. However, the rally didn’t last long and was halted at the $18K resistance level.

On the other hand, the $18K resistance level aligns with Bitcoin’s prior major pivot. In the classical price action analysis, major pivots are crucial in serving as resistance or support for the price based on the trend’s direction. A failure to surpass the prior main pivot in an uptrend rally is a clear bearish sign.

As the chart shows, Bitcoin’s uptrend rally stopped at the same level as the prior major pivot at $18.3K. In light of this, the price has initiated another bearish rally. Hence, considering the current market structure and price action, a drop below the blue trendline seems more likely.

After getting rejected at $18.3K, the price reversed and started an impulsive bearish rally. Short-term continuation correction phases always accompany an impulsive rally.

In the 4-hour timeframe, after a steep drop, the price entered a short-term continuation consolidation stage and formed an ascending bearish wedge pattern.

Most recently, the price plummeted below the lower boundary, which validated the continuation of the bearish trend and continued to plunge toward the next support level. The following critical support level is the prior major pivot at $15.9K. If it fails, market players should anticipate another price crash toward $15.4K, the recent cycle’s low.

This indicator tracks the ratio of the monthly average to the yearly average of “Active Addresses” in the Bitcoin Network.

Revisiting the 2022 trend of this metric shows that since December 2021, the market began a range of diminishing demand across the network. The declining rate in this metric has been slowing down since the early Jun market capitulation.

Presently, we are witnessing a fragile equilibrium status in the active address momentum, creating a potential for a possible rally if new demand enters the market in the coming weeks.

The post Bitcoin Drifts Away From $17K as Bears Continue Settling in (BTC Price Analysis) appeared first on CryptoPotato.

ETH Remains Rangebound, is This the Calm Before the 2023 Storm? (Ethereum Price Analysis)