Can Bitcoin ‘Detect’ Stupid People? This Book Author And Math Statistician Says Yes, It Can

Nassim Nicholas Taleb has released a number of provocative comments on social media regarding bitcoin in 2022.

The author of “The Black Swan” and “Antifragile” has compared the world’s largest cryptocurrency to a contagious disease, rejected it as useless, and asserted that it provides no protection against anything.

Fast forward to 2023, Taleb revealed his opinions on Bitcoin once more, and he now has a new moniker for the cryptocurrency: Detector of imbeciles.

Taleb claimed in a recent interview with L’Express that the cryptocurrency industry and a portion of the technology will soon become extinct when the era of “low-interest rate ‘Disneyland’” comes to an end. 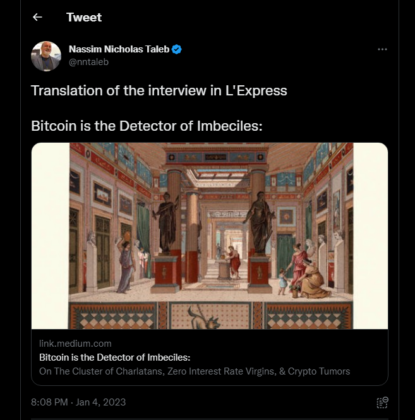 Taleb argues that the crypto has failed to achieve its purpose of becoming a decentralized currency and store of value, and he suggests that “we need to return to a regular economic life with interest rates between 4% and 5%.”

He said the past 15 years have been akin to Disneyland, with near-zero and often negative interest rates and, as a result, no actual market functioning.

“We no longer understand what a long-term investment entails. The end of real finance has arrived.”

Bitcoin, according to the 63-year-old author, is susceptible to inflation and has no capability to safeguard against so-called “black swan” events.

A black swan is an unexpected, out-of-the-ordinary occurrence with potentially disastrous results.

This category of occurrences is distinguished by their high rarity, devastating impact, and overwhelming contention that they were clear in retrospect.

Taleb, a Lebanese-American essayist, mathematical statistician, and former option trader, said that he once appreciated bitcoin and cryptocurrency in general, at least in part because he opposed the policy of the U.S. Federal Reserve.

On Crypto & And Hedging Against Inflation

He added that he incorrectly believed the crypto would serve as a shield against weak monetary policy.

When he presented his “bitcoin black paper” research in 2021, he stated that despite the enthusiasm surrounding the crypto in its current form, Bitcoin failed to “satisfy the concept of currency” without a central authority.

From the Bitcoin “Black Paper”: as recent event illustrate, only a fool can believe in the theory:

Taleb also noted that the complete inability of bitcoin to become a legit currency has been concealed by the inflation of its value, which has generated (on paper) earnings for a sufficient number of people.

In actuality, he explained, bitcoin has retained extraordinarily high volatility throughout its history, and much more so at higher values, which makes its market valuation significantly more volatile.

Now, he believes that opportunists and scammers are increasingly drawn to cryptocurrencies, where they may prey on naive consumers who have been deceived by promises of swift and excessive returns.

Protecting Your Crypto Assets: The Importance of Private Keys