MATIC Holders Suffer Massive Losses, Here’s How Many Wallets Are In The Red

MATIC’s price looks to be holding up quite well in the market given current circumstances, but given how much the crypto’s price has fallen from its 2021 all-time high price, the vast majority of its holders are still nursing losses from their investments.

Data from the on-chain analysis platform IntoTheBlock shows that 80% of MATIC investors are seeing losses at current prices. These analyses take into account the price at which the tokens were moved into a wallet and compare that against the price of the digital asset currently to give these figures.

The summary for MATIC puts only 15% of investors currently in profit with 5% at neutral territory, meaning they purchased their tokens at the same prices as the current value of the coin. It also puts into perspective just how much investors have lost. 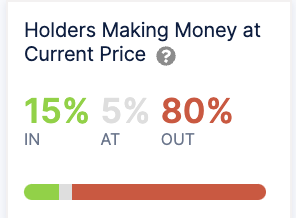 The asset is still mainly dominated by medium-term holders, meaning those who have held their coins between 1-12 months. This holder base makes up 56% of MATIC investors. Long-term holders are still significant at 38% and short-term holders who bought in the last month are sitting at 7%. This shows that despite the losses, it is a digital asset with an investor base looking to hold for the long term.

Polygon Is Still A Big Player

Even with the bear market, MATIC has been able to show strength in the market. It is now officially one of the largest cryptocurrencies by market cap, placing 10th on the list, with important partnerships that have increased attention on the blockchain.

One of the most recent of these was the announcement that the DeGods and y00ts NFT collections, which are the largest on the Solana blockchain, would be migrating to Polygon in January 2023. Other notable partnerships include Reddit, Meta, Stripe, Starbucks, Adidas, Disney, and Nike, among others.

Polygon’s total value locked (TVL) also surpassed those of competitors such as Solana and Avalanche. This makes it one of the top 5 largest decentralized finance (DeFi) ecosystems in the crypto sector.

SEC Says No To Binance’s Acquisition Of Voyager Digital Assets