Bitcoin addresses over the last couple of months have been fluctuating between accumulation and dumping. But one important fact is that there has been consistent growth in 2023 despite the market being less than a week into the new year. The important cohort here is bitcoin addresses that are holding more than 10 BTC on their balances.

According to a chart posted by Glassnode Alerts on Twitter, the number of bitcoin addresses holding more than 10 BTC on their balances has touched a new two-year high. This investor cohort had previously declined especially as the price of the digital asset had suffered multiple dips and crashes. 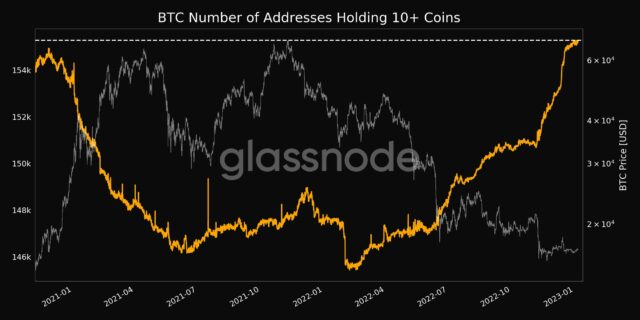 Looking at the chart above, it illustrates just how much it has risen in the last month. It works out to about a 4% increase in the number of investors that match this criterion, and it is not the only one seeing such growth.

Another cohort, addresses holding more than 1 BTC on their balances also saw tremendous growth in the new year. This time around, it reached a new all-time high of 979,707 addresses after trending around 800,000 close to the end of 2022.

What The Accumulation Could Mean For BTC

Despite the size of bitcoin making it harder to move with such accumulation trends alone, the fact that addresses holding 1+ and 10+ BTC were recording such growth has no doubt had a positive impact on the digital asset. If not moving the digital asset’s price itself, lifting investor spirits during such dreary times positively impacted the price.

In the last 7 days, the price of bitcoin is back in the green and had seen 1.39% gains, according to data from Coinmarketcap. Losses in the digital asset in the last day have also slowed down to just 0.56%. This means BTC is still able to hold support above $16,600 while keeping the bears at bay.