Leading blockchain platform Polygon has announced its latest collaboration with Mastercard to launch a Web3 accelerator program aimed at bringing budding musical artists into the spotlight by leveraging Web3 technology and other blockchain-based innovations.

Mastercard is one of the world’s biggest payment processing companies and is well-known for its massive commitment to promoting emerging music talent.

According to Polygon, the Mastercard Artist Accelerator program is set to begin in the spring of 2023 with only five artists who could be musicians, DJs or producers, thus, representing the different walks of the music industry.

Participants of this program will be equipped with the necessary skills, tools and connections to establish their music careers in the ever-expanding digital economy. It will also provide them with special invites to shows, musical projects releases and other exclusive events in the industry.

Building And Promoting Brand Via Web3

Via this blockchain-based program, artists will learn to build and promote their brand using Web3 processes, such as the minting of non-fungible tokens (NFTs), participation in virtual realities, e.g. the metaverse, and the maintenance of a vibrant fan community as is commonly practiced with most blockchain projects.

“Web3 has the potential to empower a new type of artist that can grow a fanbase, make a living, and introduce novel mediums for self-expression and connection on their own terms,” said the CEO of Polygon Studios, Ryan Wyatt.

That said, it is also worth noting that the Mastercard Artist Accelerator program is not only limited to artists. Music fans will also be granted access to the platform to learn and improve their knowledge about Web3 and its potential applications in the music industry.

For Polygon, The Mastercard Artist Accelerator program only represents their latest success in collaborating with major traditional companies to promote the adoption of Web3 technology. It is no news that Polygon is widely regarded as an excellent onboarding platform for traditional firms looking to invest in the blockchain industry.

In recent years, the Ethereum scaling solution has formed several strategic partnerships that have resulted in the adoption of Web3 applications such as NFTs or stablecoins by prominent brands such as Meta (Facebook), Italian fashion giant Dolce and Gabbana, American payment processing company Stripe, and the National Football League (NFL), to name a few.

It can be said that the confidence of such industrial titans in Polygon stems from the network’s impeccable infrastructure and the market performance of its native token – MATIC – which ranks as the 10th biggest cryptocurrency based on market cap value. 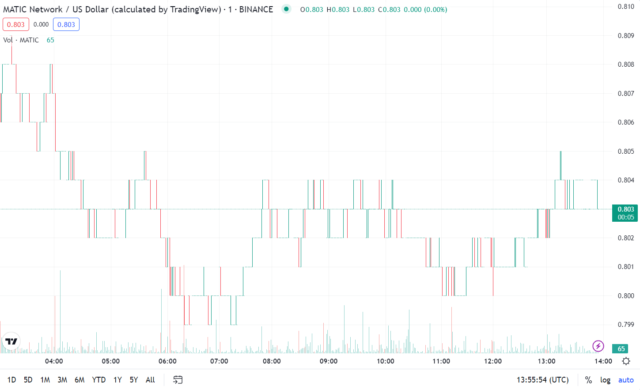 The MATIC token is always a favorite investment asset due to consistent adoption levels that originate from its various functions within the Polygon ecosystem. According to data from CoinMarketcap, the token currently trades at a market price of $0.8033, having gained by 3.11% in the last 24 hours.

MATIC Advances 6.5% In Last 7 Days – Can It Sustain Gains For Another Week?