Is there a concise way to describe the sports landscape throughout crypto over the past year? It’s been climbs to mountain top highs, dips and dives to unthinkable lows, and everything in between. We saw smashing new sponsorship deals that rose to prominence and crashed to rock bottom all in less than a year’s span. We saw controversy around athlete endorsement of crypto products. The list goes on and on, but after a quick start to 2022, market conditions impacts sports in a major way by the time the end of the year rolled around.

Let’s dive into a full year’s worth of learnings from 2022’s sports and crypto crossovers.

2022 brought us a far different year than 2021’s sports recap. Last year’s recap was dominated by few others than FTX, and we’re left with undoubtedly a bad taste in our month around the idea that FTX’s Sam Bankman-Fried and his associates could very well have used customer funds to spend exorbitant dollars on sponsorships across a variety of different sports.

Nonetheless, 2022 eventually brought around a great ‘reset’ in sports sponsorship engagement, grounding executives in the space to realize that even at this level, sometimes it really is too good to be true.

Just as we did last year, we’ll break down this year’s recap into four major buckets: sports team & league activities, brand engagement, athlete endorsements and engagement, and everything else.

Easily the biggest stories in sports and crypto were centered around team and league partnerships. It all started with Terra, who signed on with the Washington Nationals MLB club early in the year. Within a matter of weeks, Terra Luna had club branding and even logo marks right behind home plate at Nationals games.

However, it was just a few short months later that Terra’s implosion occurred, and the Nationals deal was swiftly terminated as Terra Luna effectively fell off the map entirely, as the ‘decentralized stablecoin’ experiment in this case proved unsuccessful.

Of course, the other half of the sport sponsorship topic is centered around none other than FTX. Miami Heat’s arena and the MLB jersey patch were largely the two biggest deals that FTX had in place, and both – along with many more of FTX’s deals, rocked the sports sponsorship world.

Nonetheless, one of the globe’s biggest sporting events, the FIFA World Cup, took place with Crypto.com’s sponsorship efforts occuring without much fanfare – which in the final quarter of the year, was a major win considering the chaos that had preceded throughout much of the previous 3 quarters.

In non-traditional sports, esports organization 100 Thieves took advantage of NFT momentum by releasing a free Polygon-based NFT that was the first of it’s kind. In racing and F1, Red Bull Racing saw a quiet disassembly of it’s existing Tezos deal, but a new one in place with exchange Bybit. Also in F1, the often-quiet (in the sports sponsorship space, at least) Binance signed on with Alpine for a fan token deal.

There was plenty of brand deals that came to life in 2022, but few that really left a resounding mark in the sports business.

NFTs were the centerpiece of brand engagement this year, with tepid entry from a variety of sports-focused brands like StockX, Adidas, Prada, and more. However, the winner in sports-related brand deals within crypto is likely to be Nike, whose acquisition of RFTKT has proven to be one of the better longevity plays in the space.

Elsewhere in NFTs, Dapper Labs started the year strong by launching their UFC NFT platform, UFC Strike. However, Dapper Labs has recently been losing ground to fantasy-styled competitor Sorare in recent months when looking at the broader NFT perspective in sport.

The beginning of 2022 started off with plenty of athlete endorsements and partners – but on the other side of the coin, throughout the entirety of the year, we consistently saw athletes across all different types of sport listed in lawsuits around promoting various protocols and platforms. Early in 2022, ex-NBA forward Paul Pierce and boxing legend Floyd Mayweather Jr. were both named in the infamous EthereumMax lawsuit.

In more recent months, following FTX fallout, we’ve seen athletes who had co-signed for the exchange be named in newly-formed lawsuits as well.

Beyond FTX, we also saw Crypto.com dabble with some athlete partnerships, signing on LeBron James as an ambassador early on in the year. We also saw some outspoken crypto-interested athletes such as Jimmy Butler, Alex Rodriguez, and Odell Beckham Jr.

Beyond the craziness of lawsuits and scams, it was the first full year for Tom Brady’s NFT platform, Autograph, which saw plenty of highlights throughout 2022. 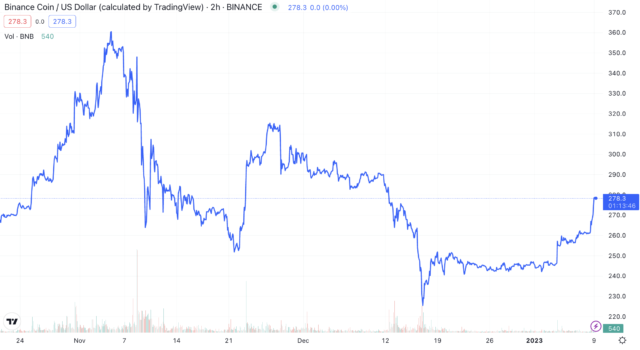 Sports collectibles continue to be an interesting topic, and there were quite a few 6-figure and up (in fact, up to nine figures) NFT sales of NFT sports cards throughout the year.

Thoroughly in the “unexpected” bucket is the storyline behind WAGMI United, once Crawley Town FC, a football club in England. The club has brought a ‘crypto twist’ and describes itself as “the internet’s team.”

It was quite a year for sports and crypto crossovers, and we don’t doubt that 2023 has plenty more in store.

On Bitcoin & Taxes: 2023 Might See Crypto Taxed And Here’s Why

This Week In The Bitcoin And Crypto: Key Dates To Watch