Did The 2022 Crypto Sanctions Have A Real Impact? Report Casts Light

The U.S. and other financial institutions and law enforcement agencies are stepping up their efforts to sanction crypto entities. The U.S. and its Office of Foreign Assets Control (OFAC) changed the modus operandi employed to impose sanctions.

The consequences of this different approach were mixed, and for many in the crypto industry, they set up a new paradigm and crossed a line that U.S. agencies respected in the past. The most emblematic of these cases was the sanctions against the Ethereum-based decentralized exchange Tornado Cash and its developers.

According to a report from on-chain analytics firm Chainalysis, U.S. law enforcement agencies used to sanction individuals and entities. In 2018, the OFAC announced its first crypto-related sanctions against two Iranian individuals.

In the following years, these sanctions increased in size and implication. As seen in the chart below, crypto sanctions trended to the upside in the next years, with 2022 recording the most significant spike in the number of sanctioned addresses and entities. 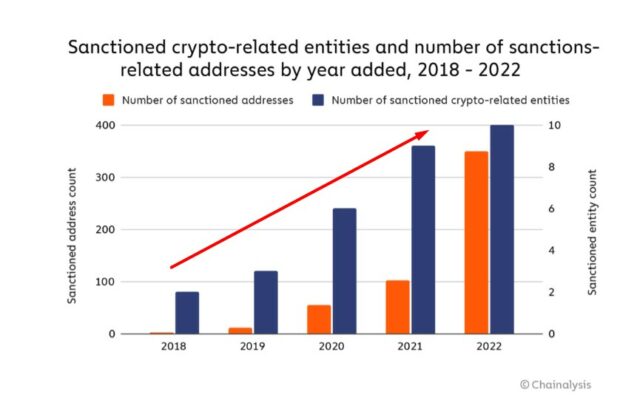 The OFAC shifted its approach when it decided to target crypto wallets. The chart shows a focus on addressed attributed to bad actors. The report claims that law enforcement agencies chose to target “larger entities” and various services.

The shift in the approach is attributed to the high number of cybercrime activities recorded in the past two years. The financial institution targeted hackers, drug dealers, and money laundering operations:

(…) this diversity of entities represents a huge change compared to OFAC’s pre-2021 designations, which were all against individuals and, at the blockchain level, comprised of only a relatively small number of personal wallets.

Chainalysis claims billions of dollars were stolen from digital asset projects and protocols in 2022 alone, but what are the results of these new sanctions?

Sanctioned Crypto Entities Are Different, Should They Be Treated Differently?

At this point, things got complicated, and the implications of sanctions for the crypto industry also changed. In addition to Tornado Cash, the report looks at the darknet marketplace Hydra and Russian crypto exchange Garantex.

Each of these entities is different and had different on-chain activity before the OFAC targeted them. As seen in the chart below, the number of funds attributed to “legal” (in blue) and “illegal” (in orange) varied.

While Hydra and Garantex had steady inflows of illegal and “risky” funds, Tornado Cash saw spikes in these metrics. The decentralized exchange allows anyone to swap their tokens, and bad actors use it to launder millions of stolen funds. 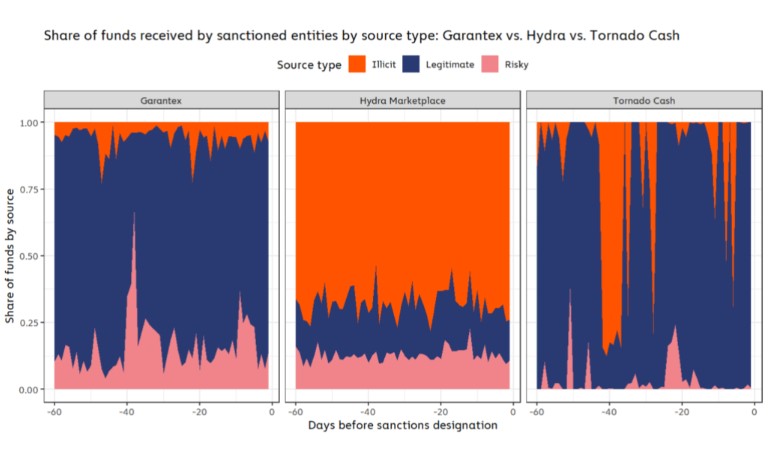 Data from the report claims that 34% of the funds sent to Tornado Cash allegedly came from illicit sources, while Hydra and Garantex recorded 68% and 6%, respectively. However, the decentralized exchange recorded most of these funds in a single transaction attributed to one bad actor.

In that sense, Chainalysis was able to determine the specific illicit activities that supported these inflows. While Tornado Cash saw most from hacks and scams, Garantex and Hydra’s funds came from Child abuse material, illegal sales, fraud, and others.

After the sanctions, the inflows from Hydra, a German-based marketplace, were 0. Authorities in the country cooperated with the sanctions, and the platform was dismantled.

Garantex saw the opposite; bad actors sent more funds to the platform. Under Russian jurisdiction’s protection, no one was willing to enforce the sanctions imposed by a U.S. entity.

Tornado Cash also saw a decline in its inflows, but implications go beyond this metric. The developers of the decentralized exchange saw real-world consequences. One of them remains under the custody of law enforcement agencies.

Tornado Cash operates on a decentralized blockchain, using open-source software. Its sanctions could have created a dangerous precedent for the nascent industry. Furthermore, the Chainalysis report shows that sanctions are only effective when there is support from local agencies to enforce them.

Is The Bitcoin Bottom In Yet? Here’s What aSOPR Metric Suggests