GALA recorded more upside on Tuesday following another announcement from its parent company. Gala Games which had previously announced a new partnership with multiple Hollywood stars revealed its latest acquisition and leadership decisions, which bolstered bullish sentiment among investors.

On Monday, Gala Games announced that it had completed the acquisition of Ember Entertainment. Ember is a game company with multiple titles under its wing, however, it is well-known for its Walking Dead: Empires, which is a massively multiplayer online role-playing game based on the popular AMC series ‘The Walking Dead.’

The acquisition of Ember Entertainment did not only come with Walking Dead: Empires which Gala Games had been working with them on, but also their entire portfolio of mobile games. New titles such as Dragon Strike and Meow Match are being integrated into the Gala blockchain.

More details about our acquisition of Ember Entertainment! These games, starting with Dragon Strike and Meow Match will be integrated with our L1 Blockchain and use $GALA as gas.

P2E is coming to mobile! pic.twitter.com/RfBJh6uqQe

Additionally, an earlier announcement also contributed to the jump in the price of the digital asset. Gala Games revealed that its flagship game, Townstar, would be switching to using GALA tokens in its ecosystem.

The game had previously used TOWN tokens as the underlying token that powers the ecosystem, but the announcement revealed that all TOWN tokens would be swapped for GALA at a 2:1 ratio, and a burn mechanism will be established as well. 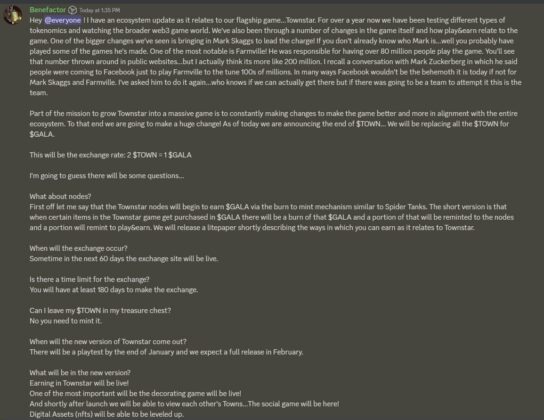 GALA has been one of the best performers in the market since the upward rally began. On Monday, the cryptocurrency had been able to grow by more than 20% following news of Dwayne Johnson and Mark Wahlberg starring in a movie by Gala Films. It has carried this bullishness into Tuesday which has seen it reach double-digit gains once more.

In the last 24 hours, GALA’s price has surged by more than 17%. The cryptocurrency was able to reach a peak of $0.043 before eventually succumbing to the bears and falling back down to the $0.041 level. Despite this, Gala continues to show strong bullish sentiment as its popularity has grown.

Resistance for the digital asset currently lies at $0.044 which is now the point to beat. However, support at $0.4 is just as strong. If there is an uptick in its trading volume over the next day, then GALA will likely test the resistance at $0.44. But if the momentum continues to fall, then bulls will have their work cut out for them to hold the altcoin above $0.04.

At the time of writing, GALA is trending at $0.04158. It is up over 15% in the last 24-hour period and is the fifth most-visited page on Coinmarketcap.