Rumors have been swirling for quite some time that Elon Musk might launch his own Twitter Coin, possibly putting Dogecoin (DOGE) on the sidelines or even ditching it. Leaks of the Twitter user interface first surfaced in early December, showing the “Coin” feature. A few hours ago, new revelations emerged.

Security researcher and reverse engineering blogger Jane Manchun Wong has uncovered evidence that Twitter could be on the verge of rolling out the new feature.

To obtain Twitter Coins, users must make a purchase using fiat money, with the minimum amount reportedly being $50, or receive the coins as rewards from another user.

According to Wong’s revelations, Twitter’s developers are currently working on a Coins purchase screen, which also reveals that the buying and selling of Twitter Coins will be handled by the payment company Stripe.

On the web, Twitter Coins purchase will be done through Stripe https://t.co/RFpWswnZfG pic.twitter.com/eAzPWjfoye

Such reactions which require coins to rate a user’s tweet are similar to Reddit Gold, a feature where Reddit users pay fiat to buy “gold” to mark topics or posts they find particularly helpful or good.

The Twitter Coin apparently closely resembles this system from Reddit. According to Wong, Twitter has been working on this feature for some time and has gone through a series of “swings and obstacles” over the past year. Thus, the idea might just be continued by Elon Musk, but not brought in by himself.

Dogecoin has suffered several setbacks in recent weeks. Most recently, the Twitter CEO has been surprisingly quiet in spreading his love for DOGE. There has been no Dogecoin tweet from Musk in the last few weeks.

Besides, the Dogecoin community has been disappointed multiple times recently. First, it was announced that Twitter is backing down from its plan to launch a cryptocurrency wallet for the time being.

On the other hand, Twitter launched a new feature for Bitcoin (BTC) and Ethereum (ETH) price charts in December, while DOGE was not integrated.

I like this quite a bit (assuming it makes me money). (If it doesn’t make me money then I don’t like it.)

Moreover, the similarity to Reddit Gold shows that Musk hasn’t necessarily thrown his crypto and Dogecoin plans out the window just yet.

Just a month ago, Musk said it would be a no-brainer to launch fiat and crypto payments because they are easy to deploy. Previously, he said he was “working hard on the Doge front.”

This is another reason why the Dogecoin community speculates that it might be possible to buy Twitter Coins not only with fiat but also crypto. The speculation is also supported by the fact that Twitter uses Stripe for payment processing. Stripe is known to be a company that strongly promotes crypto payments.

One of the largest DOGE communities on Twitter, Sir Doge of the Coin, also had words of encouragement:

Don’t get disheartened if the “Twitter Coin” rumor comes to fruition and it’s not #dogecoin but similar to TikTok’s Coins & Gifts. It clearly works for Tiktok etc., & crypto doesn’t… yet… Don’t fix it if it ain’t broken. I’m sure there’s a role for #doge to play in the future.

At press time, the DOGE price stood at $0.0772, seeing a slight uptrend in the last week. 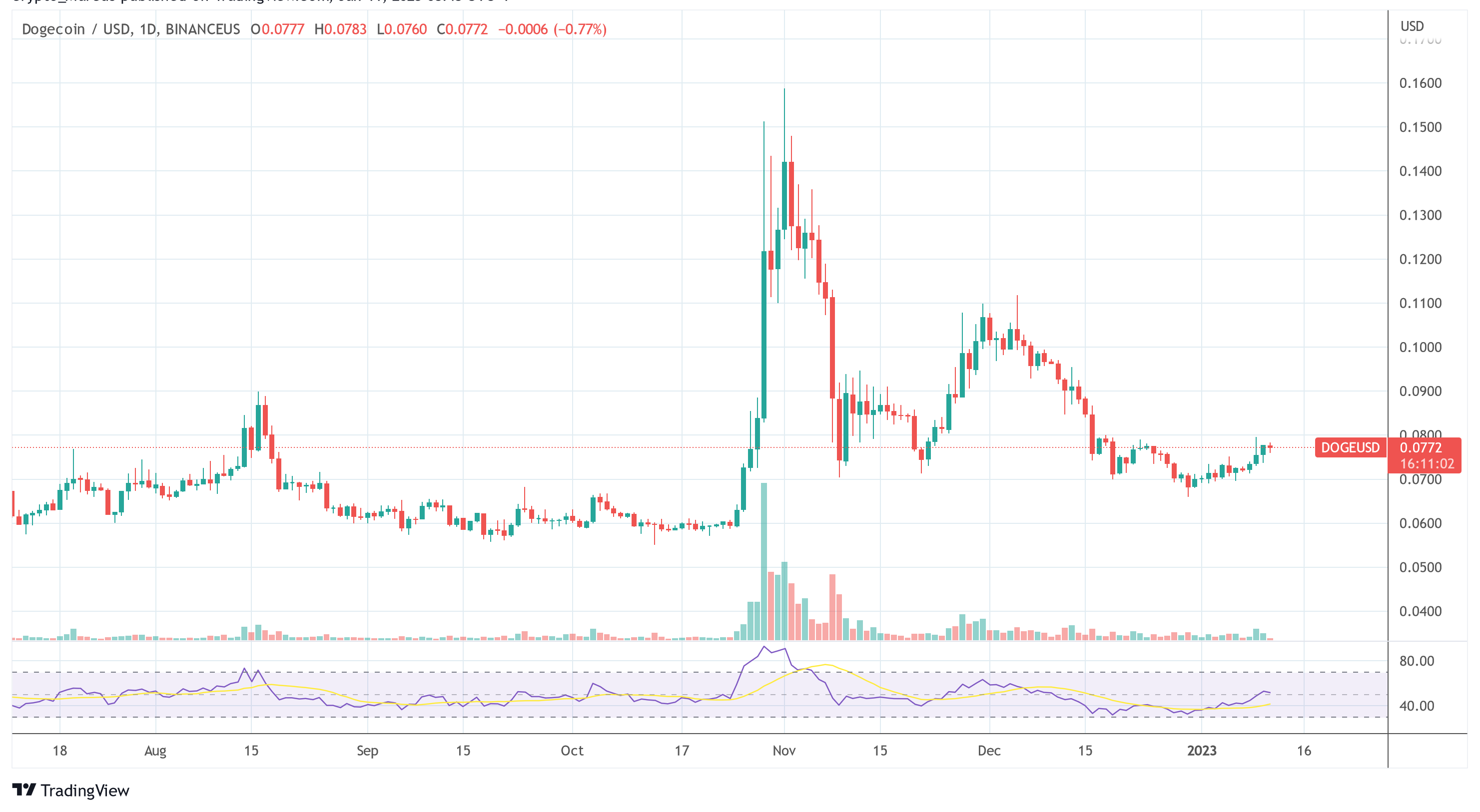