The Stellar (XLM) price remains in a long-term downtrend. After seeing an all-time high of nearly $0.81 on May 10, 2021, XLM’s price has fallen massively. Currently, XLM is 90.6% down from its ATH. Since October 2021, Stellar has also been in a descending trend channel.

At press time, XLM was trading at $0.0822. Thus, the price is showing initial signs of strength and could make a first attempt to break through the upper line of the trend channel at $0.10. What would probably be needed is a clear move that catapults the XLM price toward the next important resistance level at around $0.13.

Should this succeed, the XLM bulls could target the next resistance zone around $0.23. 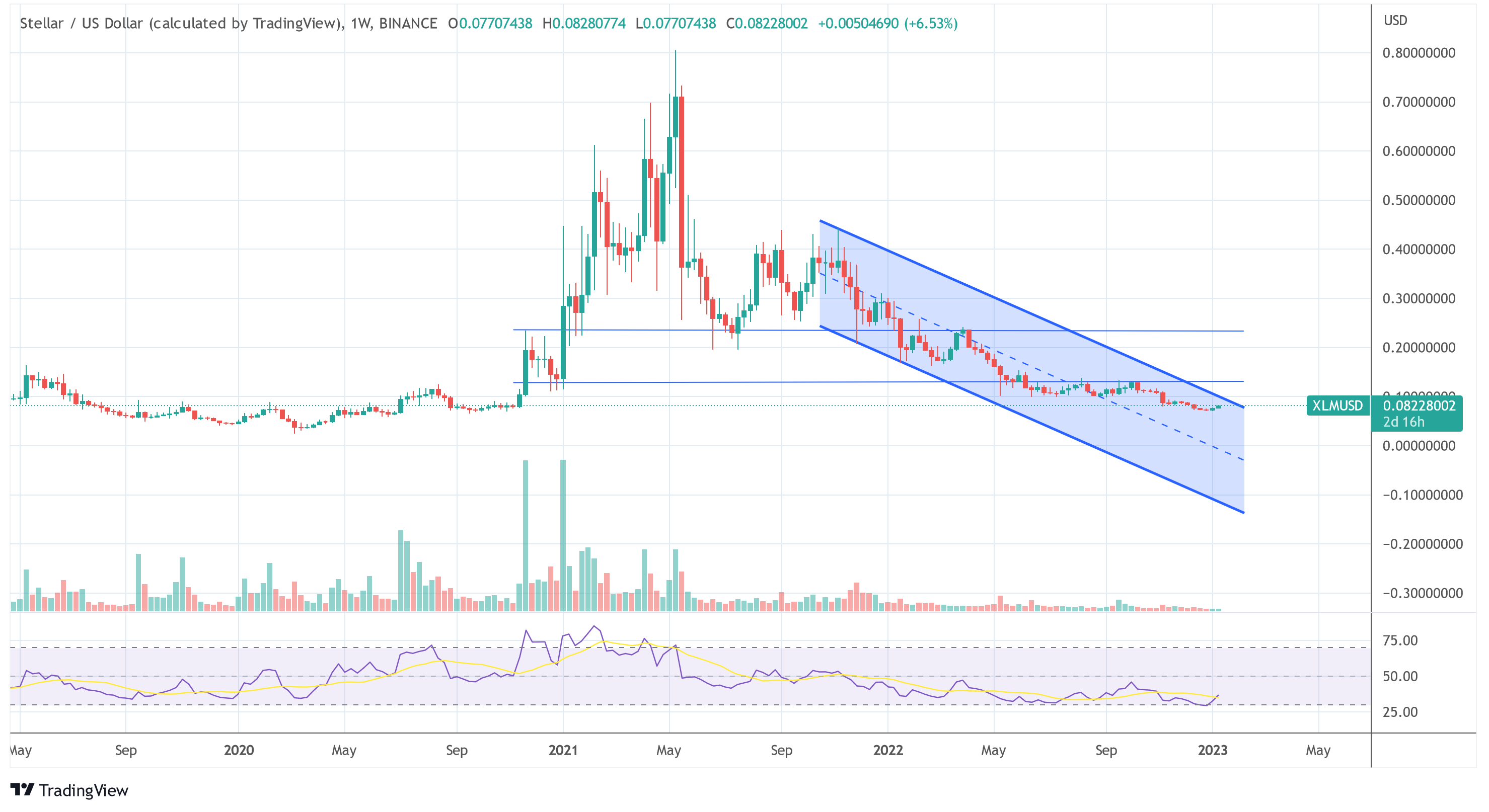 Bullish News Pushing Stellar Out Of The Bearish Trend?

A potential catalyst for a breakout out of the bearish trend was provided yesterday by the Stellar Foundation. It shared in a tweet that TASCOMBANK, one of Ukraine’s oldest commercial banks, published the results of its e-money pilot project on the Stellar network.

Remarkably, TASCOMBANK is one of the leading Ukrainian commercial banks, which is regarded as a system bank. It operates in many areas of banking, including consumer and corporate lending, factoring, e-commerce, and trade finance.

The report on the project, which was launched in December 2021, informs the National Bank of Ukraine and the Ministry of Digital Transformation about the benefits of issuing e-money on the Stellar blockchain, highlighting the advantages.

Transparency, accountability, and low transaction costs were among the many cited benefits of blockchain in a report by @tascombank.

During their Pilot, one of Ukraine's oldest banks cited the future of e-currency on Stellar as "promising"https://t.co/SSGkUdONNi

As stated in a Stellar Foundation blog post, TASCOMBANK praises the blockchain’s transparency, security, and confidentiality of customer data, low transaction costs, instant payment functionality, and high throughput “at each stage of development, from conducting operations to testing”

The goal of the project was to test the issuance of e-money, focusing on peer-to-peer and merchant payments, as well as payroll. Sergii Kholod, First Deputy Chairman of the Board of TASCOMBANK, commented:

As part of a pilot project we explored a new way of issuing and managing electronic money which could be a new generation means of payment for the citizens and organizations of Ukraine, their employees and clients, government institutions, and international organizations.

Speaking about the pilot project, Oleksii Shaban, Deputy Governor of the National Bank of Ukraine, said that there are “still many hypotheses” that need to be investigated in the pilot project. However, he expressed that the pilot results are an important basis for use at commercial and central banks.

Oleksandr Bornyakov, the Deputy Minister of Digital Transformation of Ukraine, also revealed that his ministry and TASCOMBANK are currently examining “the approaches to further rollout of blockchain-based payment instruments.”

BONK Tumbles 66% – Can The ‘Dogecoin Killer’ Live Up To Its Name?