Crypto Hack: Cybercriminals Steal Over $3.5 Billion In Crypto In 2022

Imagine the sad faces of thousands to even millions of investors in the cryptocurrency market when news of a huge amount of digital currency assets have been stolen by hackers during a single fiscal year alone.

That is the reality that many have faced in 2022, wherein $3.5 billion worth of bitcoin and other related assets were stolen in that particular year, according to Digital Information World.

The amount that was stolen obviously doesn’t bode well with many investors that have lost massive amounts of money.

It goes without saying that the news of the stolen cryptocurrency caused widespread panic and worry among major investors. Meanwhile, critics and detractors alike are using the said news to their advantage to throw even more shade against cryptocurrency.

No thanks to the wrongdoings of several hackers (the majority of which are still unknown by the authorities), many potential investors and regular investors of the cryptocurrency market are scared from making more investments.

Who Were The Targets Of The Hack?

According to the same data provided by AtlasVPN, the primary targets of the infamous 2022 $3.5 billion infiltration were several blockchain bridges and the whole ecosystem of Binance Smart Chain (BSC).

The former (blockchain bridges) is the tool used by cryptocurrency investors to move their assets from one blockchain to another, while the latter (BSC) is a well-known blockchain hosting service in the market today. 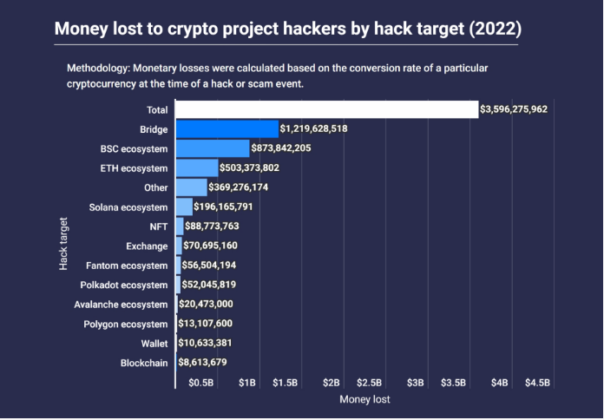 Blockchain And Its Vulnerabilities

Even the Ethereum network wasn’t safe from these assaults. The loss of cryptocurrency was estimated at approximately $600 million.

The decentralized nature of blockchain is supposed to make assets safer, yet all things considered, digital tokens appear to be just as vulnerable to hacks as traditional currencies.

1/ After four hacks yesterday, October is now the biggest month in the biggest year ever for hacking activity, with more than half the month still to go. So far this month, $718 million has been stolen from #DeFi protocols across 11 different hacks. pic.twitter.com/emz36f6gpK

Even as early as October of that year, the blockchain analysis firm Chainalysis predicted that 2022 will be “the largest year ever” in terms of the number of cryptocurrency projects subjected to assaults and subsequent loss of funds.

The number of hacks aimed at blockchain is expected to expand in tandem with its popularity. These attacks will serve to strengthen the system by exposing its vulnerabilities, but whether or not the blockchain’s developers can be trusted with users’ money remains to be seen.

Does Historically Low Bitcoin Price Volatility Make It A Currency Yet?