Ripple Is Hosting A Panel On The Digital Pound, Here’s Why

In its predictions for 2023, the Ripple leadership team highlighted Central Bank Digital Currencies (CBDCs) as one of the biggest trends, as Bitcoinist reported. To drive this agenda, Ripple continues to actively work with the private and public sectors.

One country where Ripple is very active is the United Kingdom. On Thursday, January 26, James Wallis, Vice President of Central Bank Engagements and CBDCs at Ripple will deliver the keynote at a webinar addressing the potential use cases and benefits of a digital pound.

The panel is hosted by the Digital Pound Foundation, which Ripple joined in October 2021. The foundation is focused on the development and launch of a digital pound in the United Kingdom.

The announcement at the time stated that Susan Friedman, Head of Policy, would represent the foundation as a board member to strengthen Ripple’s initiative to participate in “ongoing work to engage with central banks worldwide on technical and policy issues related to central bank digital currencies (CBDCs).”

The panel will focus on what benefits CBDCs offer. To this end, during the webinar, “a number of practitioners” who are testing or implementing real-world use cases for a digital pound will speak and discuss with a panel of experts where CBDCs and privately issued stablecoins can really achieve these goals.

The Role Of Ripple And XRP Ledger In CBDCs

The extent to which the XRP ledger or even the XRP token will play a role in a potential digital pound is as yet unknown. However, Wallis revealed in a recent interview with Tony Edward of the ‘Thinking Crypto’ podcast that collaboration with a variety of players is required to achieve a CBDC.

Other major markets are doing similar things. So in Europe, there’s a Digital Euro Association which we are also a member of and working with, and also Digital Pound Foundation in the UK. […] It’s really the private sector trying to encourage the public sector to move a bit more quickly.

Brooks Entwistle, SVP and MD at Ripple, revealed in another recent interview that the company does not intend to implement a solution for every central bank in the world, but is taking a targeted approach.

We’ve realized that we’re not going to solve that problem for every single central bank around the world – we are very targeted.

We found great interest in some of the smaller central banks around the world that are looking for a strategy or a partner, looking for a technology, a side blockchain, some ideas how to go about this.

When asked if central banks are interested in the RippleNet or the XRP Ledger, Entwistle disclosed that “[t]hey want to use technologies that will help them and their own citizens. We don’t believe there is one solution for all these central banks,” he said.

There are places where we can play, maybe with a sidechain to the XRP ledger. We may help with the interoperability across this, but it’s going to be different for every single central bank.

At press time, the XRP price was at $0.4219, seeing a retest of $0.42 which has turned to support for cryptocurrency. 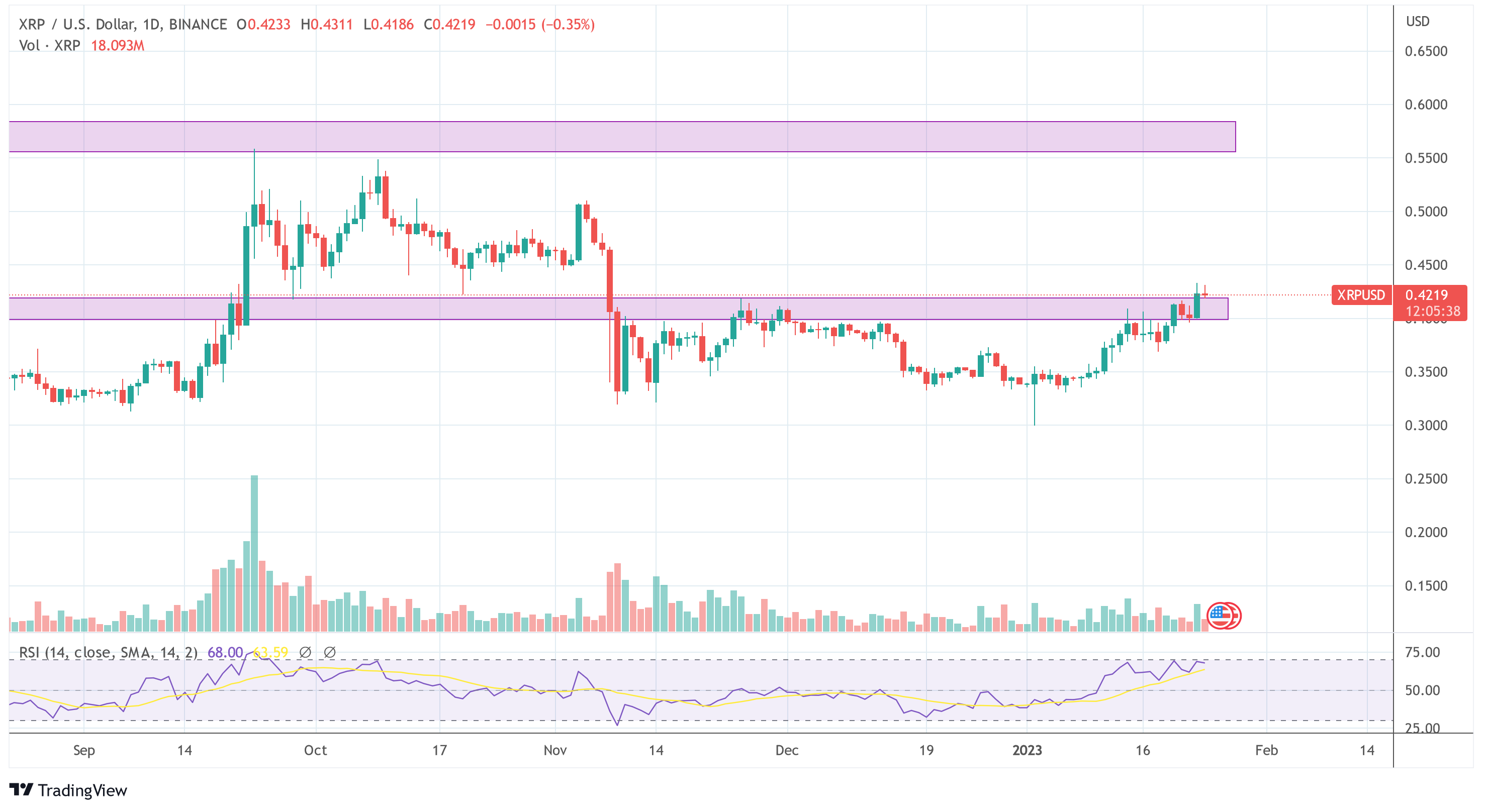 After the Failure Of Their Stablecoin Experiment, Iran And Russia Will Inevitably Adopt Bitcoin